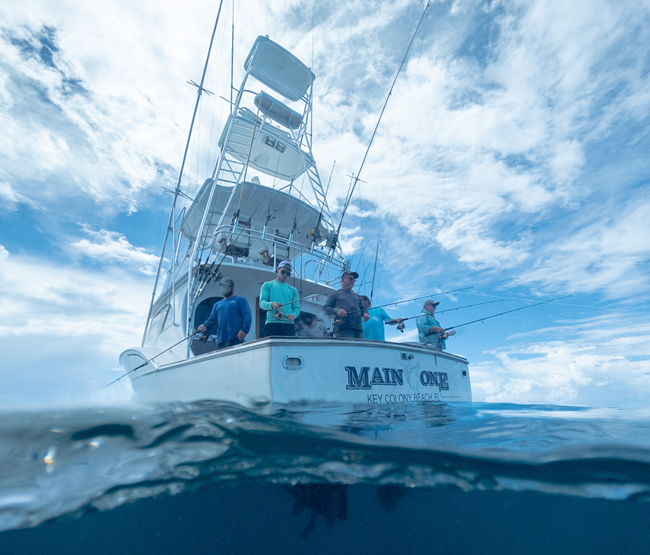 The Florida Keys are one of the world’s most desirable deep sea fishing charter destinations. Most islands in the Florida Keys have access to a wide variety of fish species with much less travel time than other parts of the country. That, combined with year-round warm weather and a relaxing tropical setting, makes the Keys a great place to vacation. In Marathon, Florida, our fishing vessels reach depths of 250ft only 10 miles offshore. At 20 miles offshore, we reach 650 ft, and at 30 miles, we can fish in depths over 1,800ft deep!

Offshore fishing in the Florida Keys can yield a variety of great eating fish.

We consider offshore charters as fishing off the anchor with the motors running. This typically involves hunting for pelagic fish that are on the move, such as Tuna, Dolphinfish (Mahi), and Sailfish. Offshore fishing charters are very popular in the Florida Keys since the fish you catch offshore are generally bigger than the ones on the reef. When Billfish or Mahi are hooked, you often get to witness some exciting acrobatics. A large school of Dolphinfish behind the boat can also make for some chaotic but very fun moments! 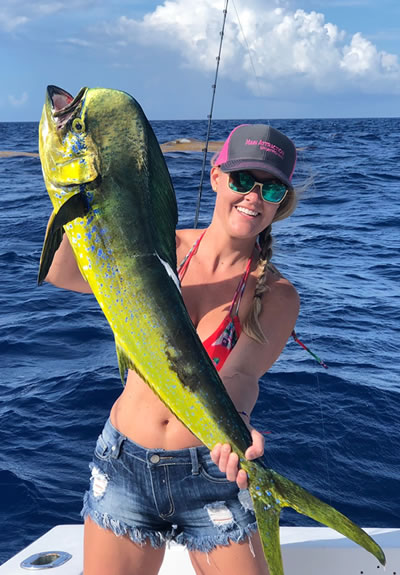 In the Florida Keys, we catch Dolphin Fish a.k.a Mahi Mahi throughout the spring and summer.

The season and weather dictate the Main Attraction Team’s offshore fishing techniques throughout the year. Our Captains use tall towers to sight-fish for species often on or near the water’s surface such as Dolphinfish (Mahi Mahi), Sailfish, Cobia, Blackfin Tuna, Wahoo, Sailfish, Marlin. These towers are often referred to as tuna towers, and they not only help our Captain’s see fish, but they also help them see weed lines and floating objects that can hold bait and attract fish. At the Main Attraction, we have gone out of our way to retrofit extra-tall towers on our boats to give us even more of an edge.

From October to February, the baitfish found further offshore are now closer to land, near or on the edge of the reef. This creates exciting opportunities to catch offshore fish without going as far out. Having offshore fish closer to land works out great in winter, as winds are usually higher and the waves are larger. Higher winds and a disturbed surface on the water can work fish into a frenzy!

When the conditions are suitable, our crews also utilize these winds to fly kites on the reef and catch various offshore fish while actually on anchor or live bait bump trolling just a few miles out. We catch Sailfish, Kingfish (King Mackerel), Cero Mackerel, and other species using kites during the fall and winter. Since the winds often come from the North this time of year, our Captains can use the island as a natural barrier to keep the trip comfortable.

October through February is a fantastic time to combo your offshore experience with reef fishing. After you catch your delicious reef fish, we can take you offshore to look for Sailfish, Tuna, Wahoo, and Cobia. 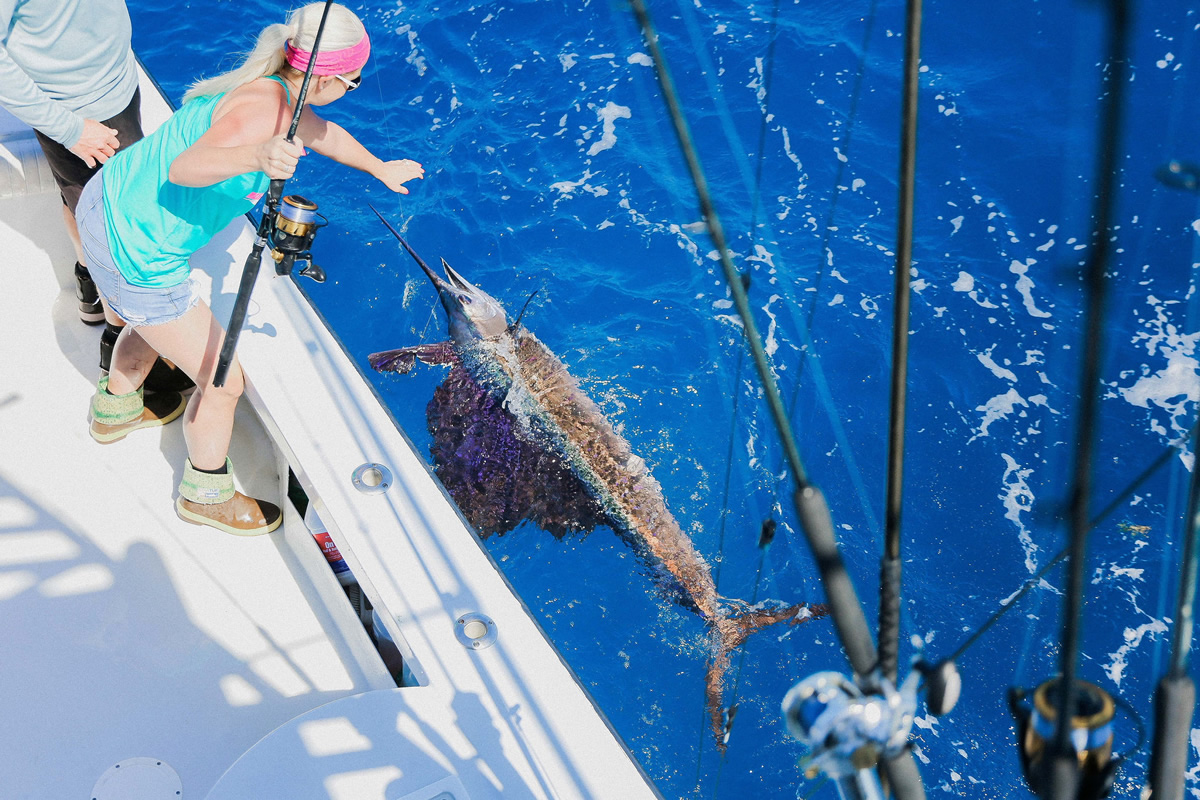 Sailfish are one of our favorite targets during the Winter and Spring.

Wreck fishing is a fun way to get on some big fish action without going very far. A quick ride from the dock gets you in depths of water from 130-300 feet deep. In these depths, we know the locations of all sorts of interesting structures that hold large fish.

Wreck fishing involves dropping baits near the bottom and drifting those baits across the underwater structure. Wreck fishing is considered an offshore activity as it does not usually involve using the anchor and the motors run continuously throughout each drift.

Also, on the wrecks, we occasionally hook into giant Sharks that weigh hundreds of pounds and the occasional Goliath grouper that can reach up to 800lbs!

We fish the wrecks year-round when the conditions are right for it. Always let your Captain advise you on what type of fishing is most likely to succeed on the day of your trip.

For more information on how we fish the wrecks in the Florida Keys, see our Springtime Wreck Fishing Article and our Winter Wreck Fishing Blog Article. 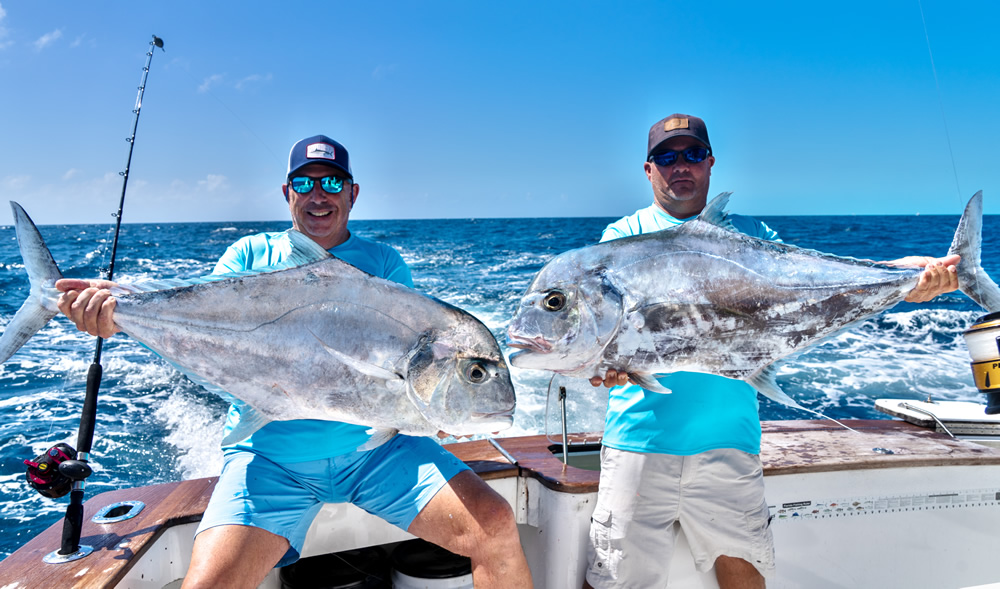 Suppose you have a full day booked and the weather is calm. In that case, your Captain might suggest deep dropping with electric reels in depths of 640-1000+ Ft. This style of fishing can yield highly desired eating fish such as Snowy Grouper, Yellowedge Grouper, Tilefish, Barrelfish, Queen Snapper, and more!

Many factors affect what species of fish a charter Captain should be targeting on any given day, so always let your Captain make suggestions on what to do. Sometimes the fishing conditions will be suitable for multiple types of fishing; in that case, the Captain will ask you what you prefer to do. The season, weather, current, and length of the trip you book will play a significant factor in what your Captain must consider when recommending a plan of action. When the conditions are right, and if time permits, Swordfish and Marlin are also possible targets. 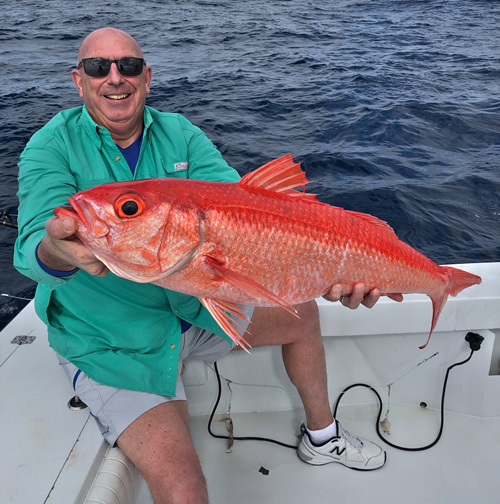 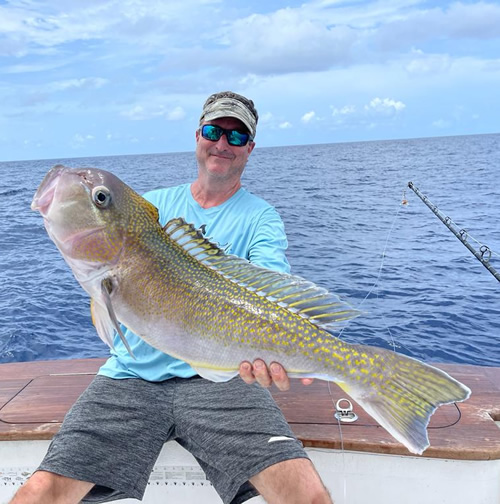 Deep water fish are not only beautiful to look at, they taste great too! 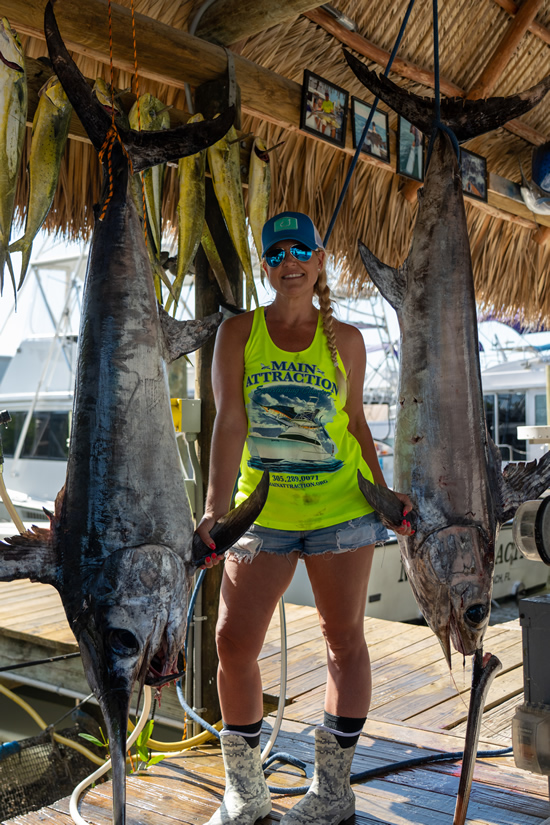 Main Attraction co-owner Katie Lewis with a pair of Swords caught on her birthday fishing trip.

Florida Keys Daytime Swordfishing is the ultimate in deep sea fishing charters as it involves fishing in depths of up to 1800 feet. If you are looking for a memorable, once-in-a-lifetime experience, you should consider a 10-hour swordfish trip with the Main Attraction Fishing Team.

Our crews have the skill and equipment required to target and land large broadbills successfully.We catch Swordfish can year-round as long as the conditions are right. Swordfish trips are usually most successful on calmer days, often during summer.

With more than 30 miles of traveling before reaching the Swordfishing grounds, there is plenty of water to look for other species such as Tuna, Mahi, Tripletail, and Wahoo.

A big part of the fun of swordfishing is when you drop large baits into the deep; you never know what you will hook! The long fight that ensues gives you plenty of time to guess and anticipate what it is. More often than not, it ends up being a Swordfish anywhere from 100-500lbs. Sometimes it is a giant Swordfish over 500lbs, a Mako shark, a Thresher, Queen Snapper, Pomfret, and more!

If you wish to learn more about our daytime Swordfish trips visit our Swordfish blog article or contact us. 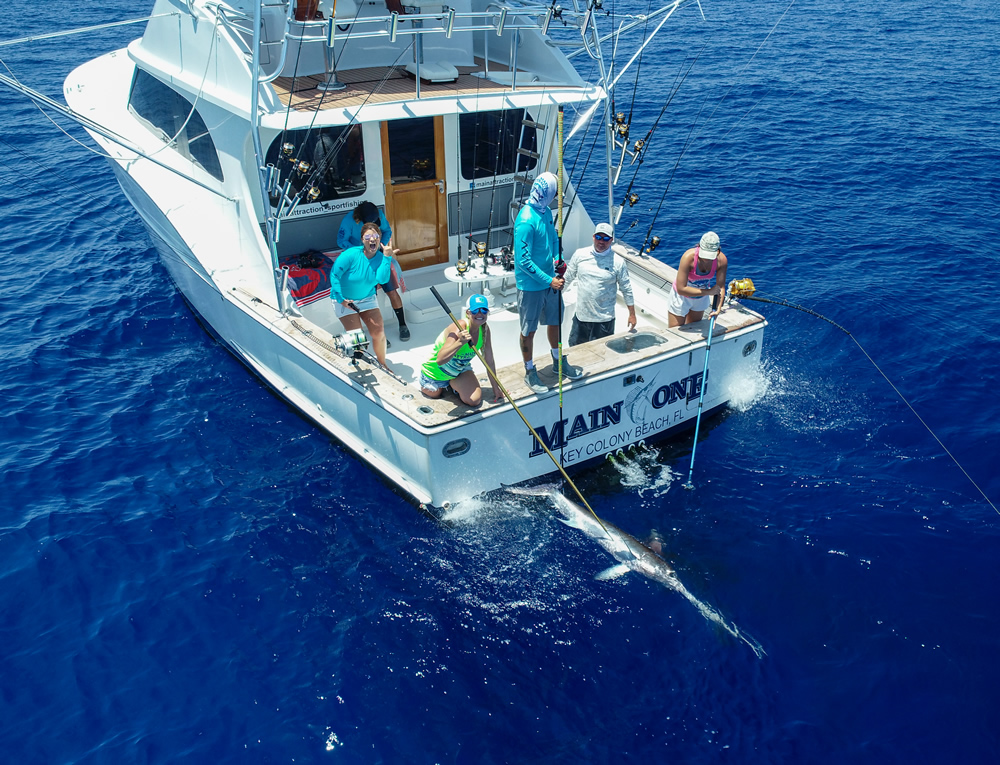