As “winter” approaches in the Florida Keys and temperatures cool to a comfortable 75 degrees the fishing heats up big-time on the reef. The Florida reef is the only living coral barrier reef in the continental United States.

In addition to the living reef, the Florida Keys has a multitude of artificial reefs on the ocean floor created by sunken wrecks and debris. Beyond the living reef in the Keys, there is not much more natural structure on the ocean floor as it is mostly sand beds. To provide more housing and spawning opportunities for fish, Florida has one of the most active artificial reef programs in the USA. Many of these structures are sunk intentionally and strategically by the FWC’s Division of Marine Fisheries Management in a way that is considered to impact fish populations positively.

These sunken structures that we refer to as wrecks include ships, submarines, tanks, buses, airplanes, mixing trucks, cargo containers, train cars, and more. 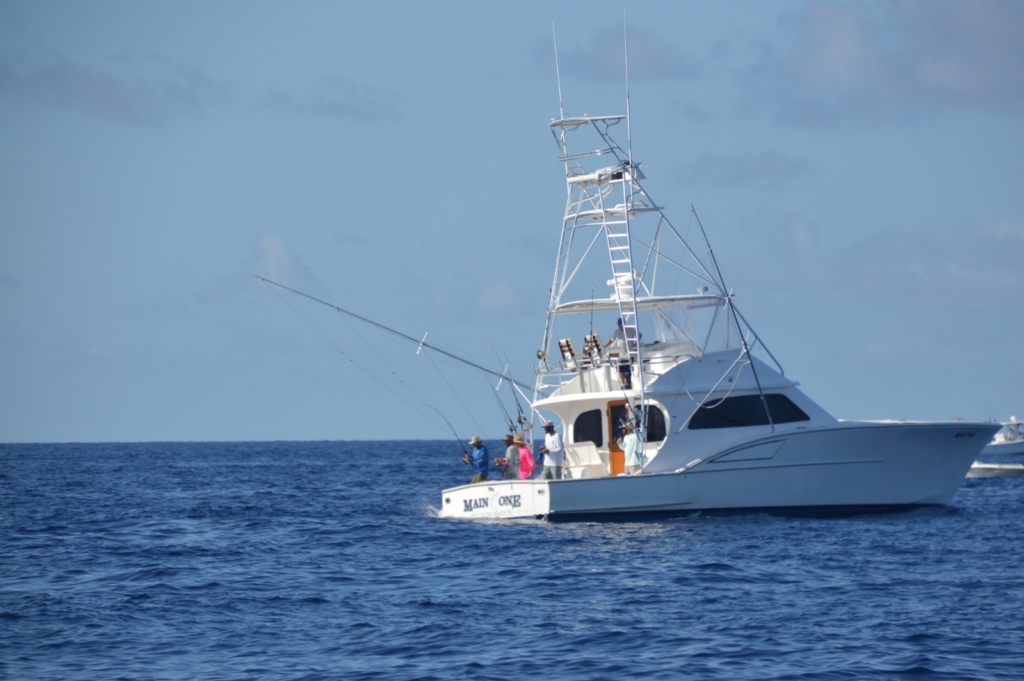 Our 49′ Sportfishing vessel Main One, fishing on a wreck.

Our Wreck fishing technique depends on the conditions of the day but the general idea is always the same. Our Captains pull up to the wreck and assess the speed and direction of the wind and current. This assessment allows them to judge the direction and speed at which their vessel will drift.

Typically we prefer a current that is moving anywhere from 0.5 to 1.5 mph. The Captain then sets up ahead of the wreck, dropping the baits near the bottom, and slowly drifts them over or near the wreck. The Captain uses his controls to adjust the position of the boat and the speed of the drift to provide ample opportunity for a predator to see or smell the bait and strike.

Our crew members like to use a very long leader to allow the bait to swim naturally and drift above the wreck so as not to snag the structure below. For bait, we use either live bait or cut bait depending on the target and fishing conditions. We often use Ballyhoo, Pilchards, Pinfish and Grunts as bait. 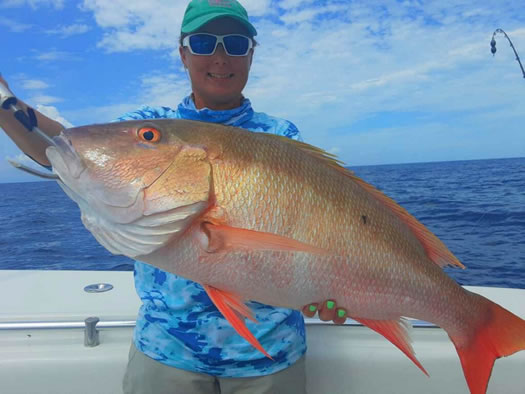 Mutton Snapper are beautiful and delicious!

Mutton Snapper, are pink and red and have a dot similar to a redfish towards the back of their tails. Their meat is a firm flaky texture that is similar to Red Snapper or even Grouper, making them excellent to eat pretty much any way you cook them.

We usually find large Mutton Snapper just off the wrecks on the sand beds surrounding the structure.

We like to use dead bait Ballyhoo for Mutton snapper and prefer to butterfly them and allow that scent to waft through the current. Deboned ballyhoo will also glide in the water and look more lifelike but a fileted pilchard or pinfish can work as well. A live Ballyhoo can also work well, or even a large pilchard depending on the day.

Mutton Snapper above 20lbs can be quite smart and they don’t just grab the bait and run. This is why a long leader is useful because it allows the fish time to investigate the bait without the angler noticing which usually leads to a premature attempt at hooking the fish.

Once hooked, Mutton Snapper put up a great fight, they tend to make several hard and fast runs when they first realize they are hooked. If they come up quickly they will fill up with air toward the end of the fight and at that point, it is just a matter of getting them in the boat before a predator gets it first! 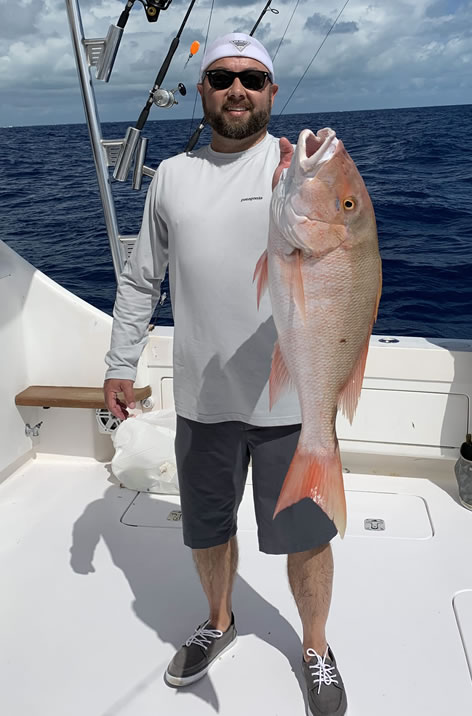 A Mutton Snapper caught on a wreck in 180 feet.

Greater Amberjacks are one of the hardest fighting fish you’ll encounter pound for pound; they offer a great workout! As the largest member of the jack family, it is not unusual for us to hook Amberjacks on the wrecks that weigh upwards of 100 pounds or more!

Unlike Mutton Snapper these fish are targeted right on or above the wreck. Some of our anglers enjoy the fight, take a photo and release them. Others prefer to keep their fish and smoke the meat and make fish dip out of it.

Amberjack have a reputation for being of poor food quality mainly because larger Amberjacks can have worms in them. The smaller ones however are quite good to eat and worm-free.

Most people don’t know this but chances are they haven eaten Amberjack whether it was in a fish stick, fish sandwich, or fish and chips from a restaurant. In fact, nine times out of ten when you order fish dip from a restaurant in the Florida Keys you are either eating Amberjack or Mackerel!

Amberjacks are not picky eaters but we find live bait to work best. Large pilchards, ballyhoo, pinfish, blue-runners, or even a grunt can do the job.

When hooking an Amberjack on a wreck you want to wind as fast as possible as there are Sharks that weigh hundreds of pounds that can easily eat an Amberjack on the way up! 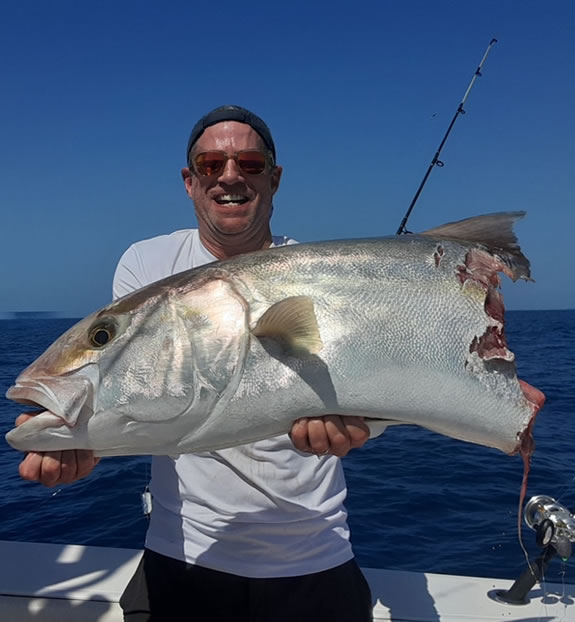 This Amberjack was big but there was something bigger!

Vermilion Snappers are beautiful, bright red, and delicious to eat, much like Queen Snapper. We catch them on or near wrecks in shallower water, often less than 100ft deep. 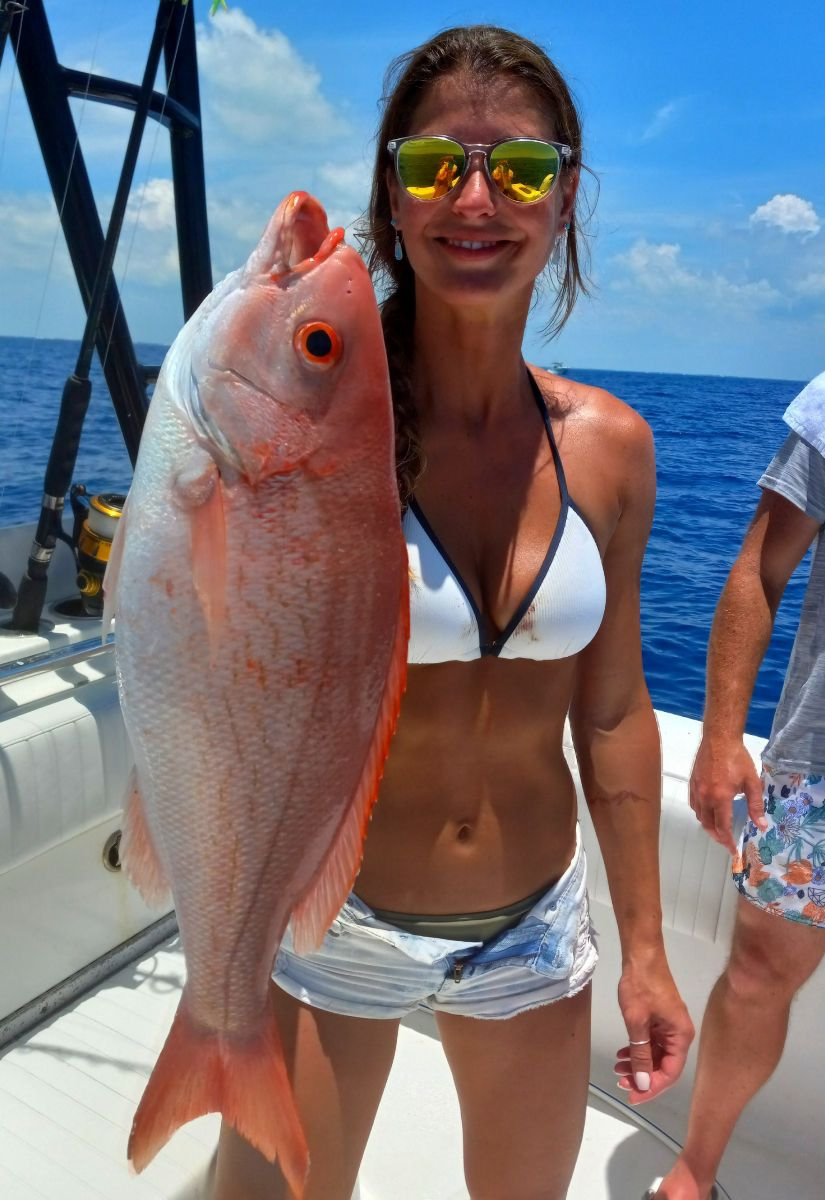 Vermilion Snapper are fun to catch and tasty to eat; a great alternative to Yellowtail fishing when the conditions are right.

Occasionally we even catch a nice large Black Grouper on the wrecks. This is great when Grouper season is open, currently June 1- December 31 in Federal waters (at the time of writing this). When out of season, we must vent them and release them. Occasionally, a huge shark or Goliath Grouper weighing hundreds of pounds might take a bait. In this scenario, if the angler manages to get one of these massive beasts to the boat, we leave the fish in the water, snap a pic, and immediately let it go.

Something magical happens in the waters of the Florida Keys every winter. Many of the pelagic species we find in deep water move much closer to shore throughout the year. Mostly these fish are closer because that is where their prey is. Baitfish are closer to land this time of year for various reasons, including spawning seasons, currents, and a closer Gulfstream.

This is great for wintertime anglers because winds pick up this time of year, so heading far offshore wouldn’t be nearly as comfortable. It is not unusual to catch pelagic species on the wrecks in the wintertime.

The pelagic species we catch on wrecks are Tuna, Wahoo, Sailfish, Dolphinfish, Cobia, and Mackerel.

A good tip to remember when wreck fishing is that you typically do not want to start winding until you see the rod bend over. If you wind when the tip is only getting taps you risk pulling the bait right out of the fish’s mouth. When using a long leader waiting for the rod to bend over lets you know that the fish is good and hooked. That is the point in which you want to wind like crazy because there is always a bigger hungrier fish in the sea!

Putting your knees against the comfort pad on the back of the boat and wearing comfortable shoes with a good grip will help you fight your large fish safely and effectively. At that point you simply lift up on the rod to create space, and wind quickly as you lower the rod keeping the line straight and tight at all times.

If you have questions about wreck fishing or plan to visit the Florida Keys soon, call us at (305)-289-0071 or visit our contact page to book a Wreck fishing trip with one of our expert Captains. To learn about Wreck fishing in the spring you might be interested in reading this article. 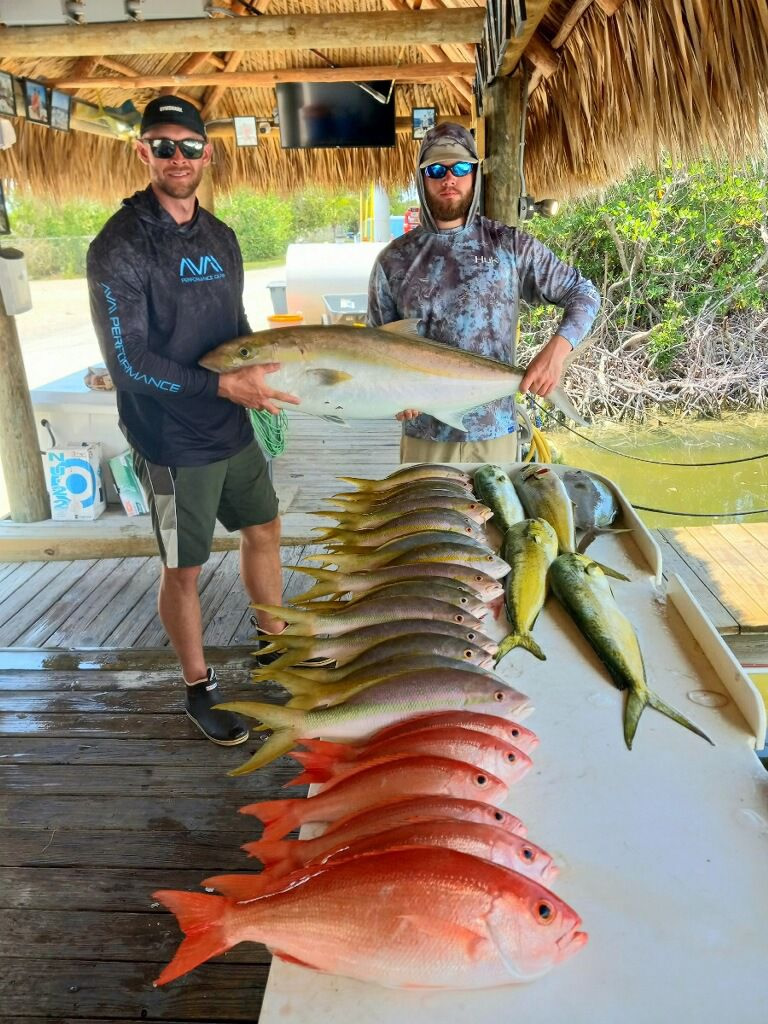 Wreck fishing can be combined with Reef trips and Offshore trips for a variety of species.