Have you ever dreamed of catching a Broadbill Swordfish? Main Attraction co-owner Katie Lewis has! You might ask, isn’t she married to Captain Marty Lewis? Can’t he take her? Yes, of course! However, Captain Marty fishes so many trips a year that Katie usually wants him to get some much-needed rest on those few days that he gets off from work.

When Marty and Katie manage to get out for some fun fishing, they also need the weather and current to cooperate in considering Swordfishing. Because of these reasons, a big broadbill Swordfish has eluded Katie Lewis for many years.

Katie first met Captain Marty when she was a teenager. She used to fish with her Dad as a client and Marty as the Captain. On one of those trips with her father, they caught a small but legal swordfish, a delightful memory that she treasures. Years later, once Marty and Katie were married, Katie wanted to recreate that memory with another Swordfish and perhaps a bigger one this time.

Despite Captain Marty working seven days a week and Katie rarely taking a day off, they had been able to make several attempts over the years. During the Pandemic in 2020, the Florida Keys were closed to visitors for nearly three months. The shutdown created a rare opportunity for Katie to go Swordfishing with Marty when the weather was right. 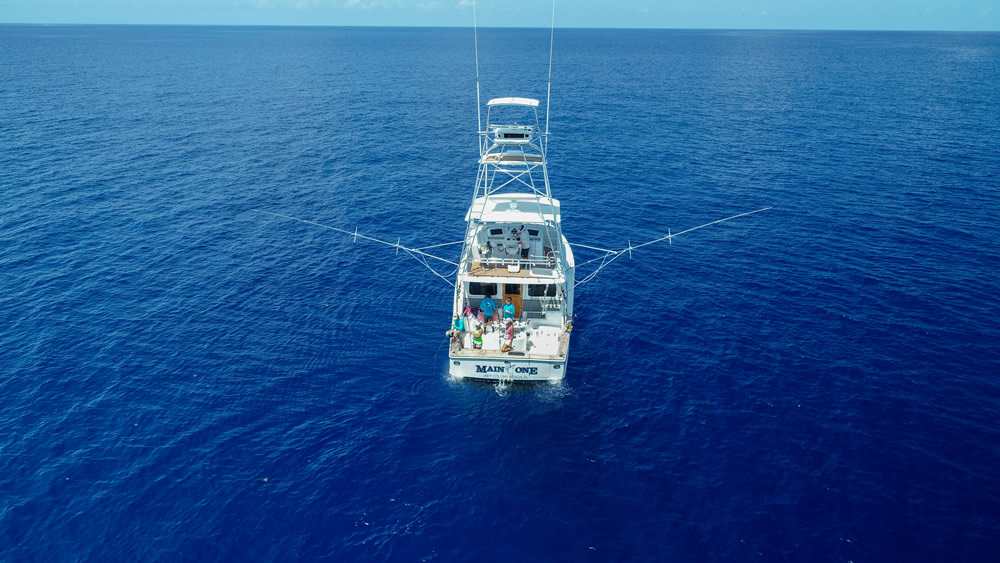 The couple would head more than thirty miles offshore and drift baits repeatedly, waiting for a bite, along with their young daughter. Some days, the Swordfish weren’t biting; other days, they would hook one but lose it before it reached the surface. Before successfully catching a Swordfish with Katie onboard, the Florida Keys reopened, and it was back to the usual busy schedule. Having caught many beautiful Swordfish with clients, Marty would sometimes joke that Katie had terrible luck with these fish. However, the reality is that Swordfish are notorious for coming unhooked due to their soft mouths and how they fight on the line.

After two years of grinding and about two thousand charters fished by the Main Attraction team, Katie decided to try her luck with Swordfish again. In addition to being Cinco de Mayo, May 5th, 2022 was also Katie’s birthday. Katie “booked” her husband to take her and her friends Amy and Riley fishing. Katie also brought along a very talented photographer, Mikey, as they are always looking to film and create content for social media and YouTube.

As the Main One left the Marathon Sailfish Marina, Katie thought the day could not have been more perfect. It was a gorgeous day, the sky was blue, and the ocean was calm. The Mate had a playlist ready for the ladies who danced and sang and had a great time as they headed offshore. 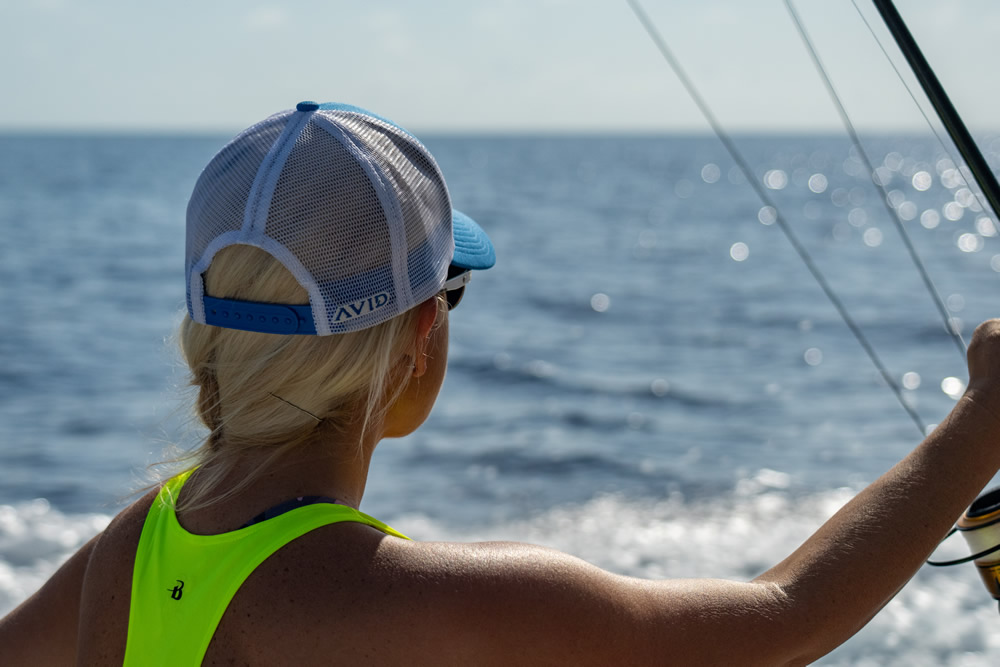 Katie Lewis ponders what they day will hold as the Main One heads offshore.

Captain Marty headed offshore to the Swordfish grounds, stopping for birds working the surface, floating debris, and weed lines, producing schoolie and gaffer sized Mahi. The girls had a blast casting baits to the schools of fish, hooking them, and even gaffing them. With enough fish in the box to feed everyone for dinner that night, the group continued on to target Swordfish. 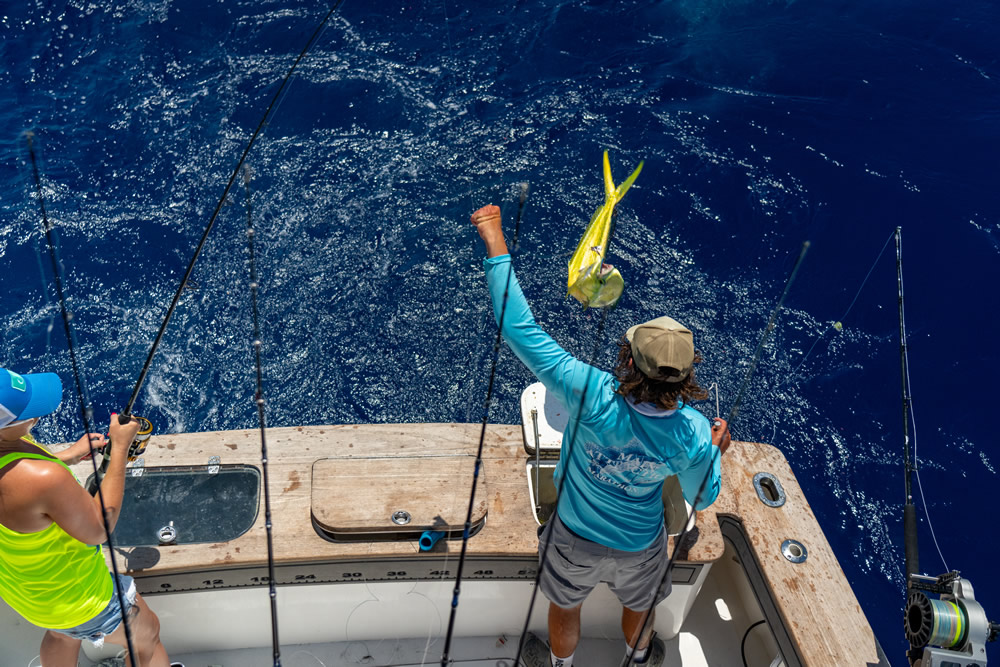 The Main One getting some “groceries” before heading to the deep to hunt for Swordfish.

Swordfishing takes a lot of preparation. Captain Marty rigged squids and Dolphinfish bellies the night before; he even rigged baits on the way offshore that morning. It was worth the effort because the Mate was all rigged up and ready to deploy baits when the Main One arrived at the fishing spot. 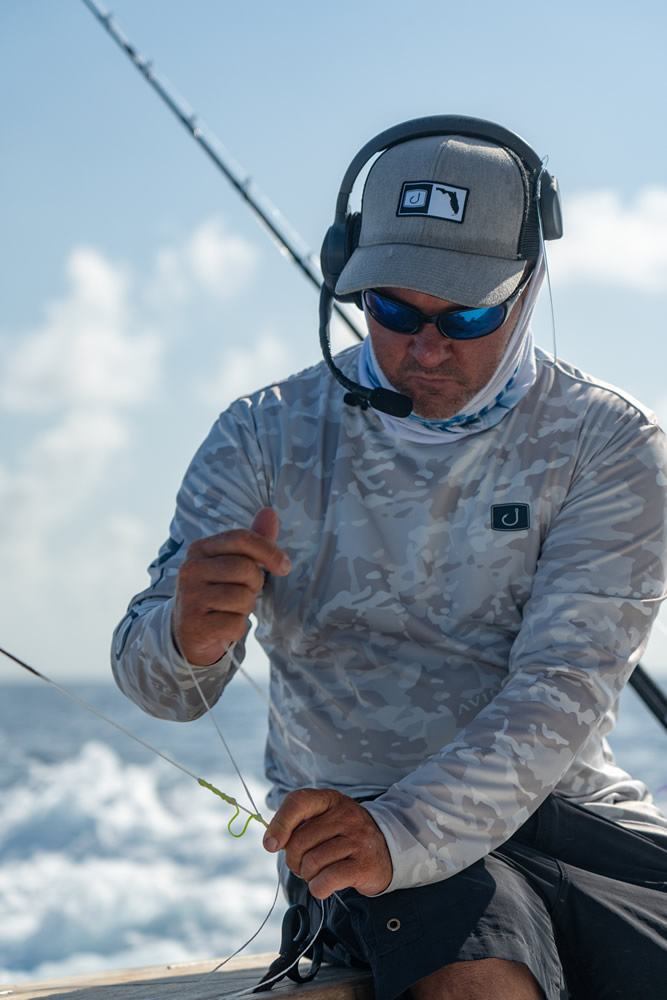 They worked two lines, one on a jug and another off the boat. After a 15-minute drift, Captain Marty had an inkling that he wasn’t in the right area. He instructed the girls to bring the baits up; they would move elsewhere. Marty ran for about 10 minutes to an area that looked better and told the team to redeploy the baits.

Amazingly within 5 minutes of redeploying the electric reels to the ocean’s bottom, they hooked a sizable fish. Mate Lance could feel the power of the fish pulling drag. Everyone on board was very excited, but Katie reminded everyone that a lot could happen with 1800 feet of line left to go. 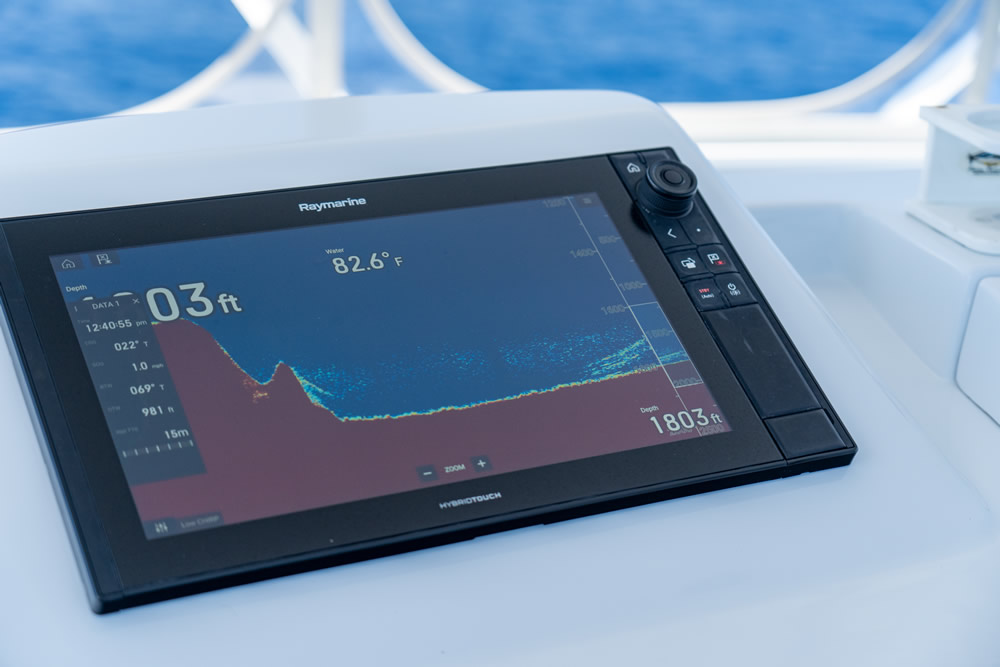 It is not unusual for Captain Marty to target Swordfish in depths of 1800 feet.

Katie couldn’t help thinking of how she had gotten excited in the past, only to have the fish pull the hook or catch a Shark or some other species she wasn’t targeting. Katie was hopeful, but she was right; a lot can happen with 1800 feet of fishing line to go. They fought the fish for about 45 minutes with the electric reel. As the fish got closer, the photographer Mikey deployed a drone and kept it hovering over the transom.

The group could now see the vibrant purple color of the fish; they had hit their mark, Swordfish! Mate Lance held the rod while Katie positioned herself with the gaff, ready to strike. Each time the large fish would get close to the boat, it would pull drag out again just out of reach of Katie’s gaff.

The Mate reached out with a longer gaff with a smaller hook to snag the fish’s tail to try and get some control of the beast. Katie then used the gaff with the larger hook to gaff the fish. At this point, the fish went nuts, which was no surprise. Katie held on tight and waited for Captain Marty to come down to the deck and help bring the fish around to the tuna door. One thing to remember is never to bring a swordfish in that still has a lot of life. They can be mean and dangerous! Their bills can be a slashing weapon on the deck as they whip their heads back and forth. 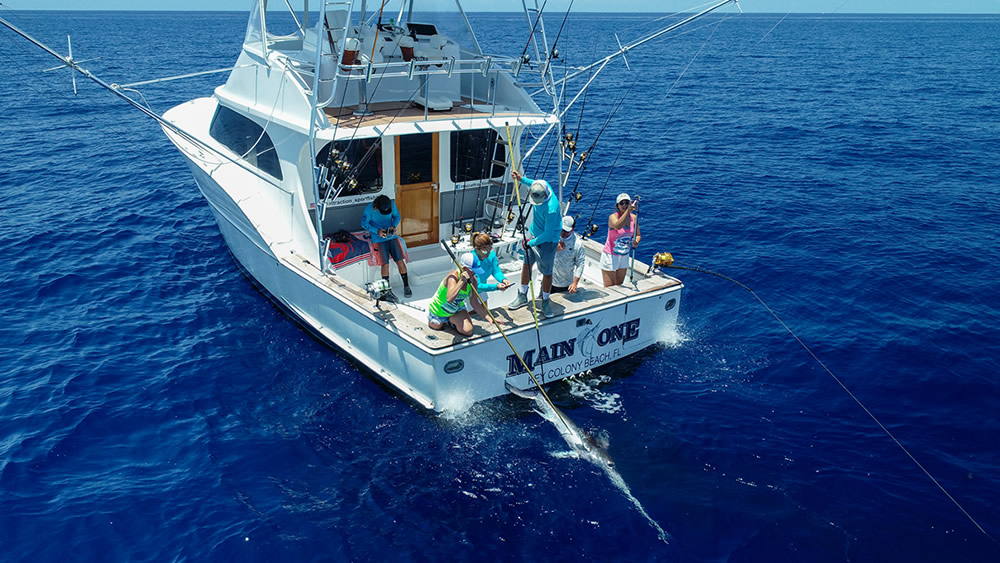 Katie Lewis gaffing the first Swordfish on the day.

Both Marty and Katie brought the large fish into the boat being careful to stay clear of the sword. Katie was thrilled and mentioned how incredible it felt to cross this off her bucket list. Catching this fish on her birthday with her husband and good friends on board made it even sweeter. There were high-fives and hugs all around once the fish was secured. Neither Riley nor Amy had ever caught a swordfish and both were amazed at what they had just experienced. Even Katie, a seasoned angler at this point, needed a moment to process what had just transpired. Once Katie’s shock wore off, it was replaced with an immense feeling of gratitude and joy. They all celebrated and took photos before packing the large fish on ice.

Captain Marty was amazed quickly they got a bite, so he instructed Lance to get rigged up quickly as he headed back to where he started his previous drift.

Once the Main One was back in position, the Mate deployed the first rod and then started on the other. Katie jumped on the first rod and started to work the line. First, they let the line to the bottom and reeled it up about 50-100′. However, as the boat drifts, the depths will continuously change as the baits are dragging by the vessel. So by working the line, Katie was keeping the bait near the bottom where predators like Swordfish could see it. 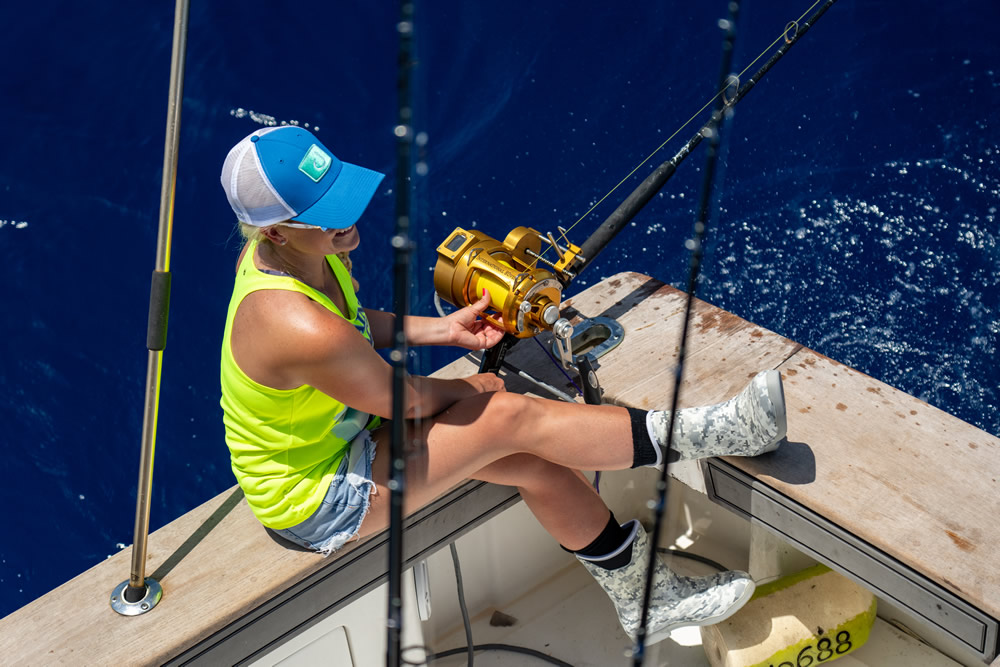 Katie works the line to keep the bait near the bottom where it is visible.

As fate would have it again, within a few minutes, the Main One and crew had hooked another fish! Katie could hardly believe what was happening; she was ecstatic but reminded herself not to get her hopes up. She knew it could be anything and wasn’t necessarily a Swordfish.

Just as with the previous fish, the fight lasted about 45 minutes. Mikey threw the drone up to get some video as the fish approached the surface. Lance shouted, “It’s coming up!”. Shortly after, the 120 lb swordfish came jumping out of the water. This was probably one of the coolest things Katie had ever seen! Mikey followed the fish with his drone while the Mate prepared the harpoon. As the fish approached the transom, Lance thrust the harpoon into the fish, and Katie quickly followed with a gaff shot. The Main One had now caught two Swordfish on the day! 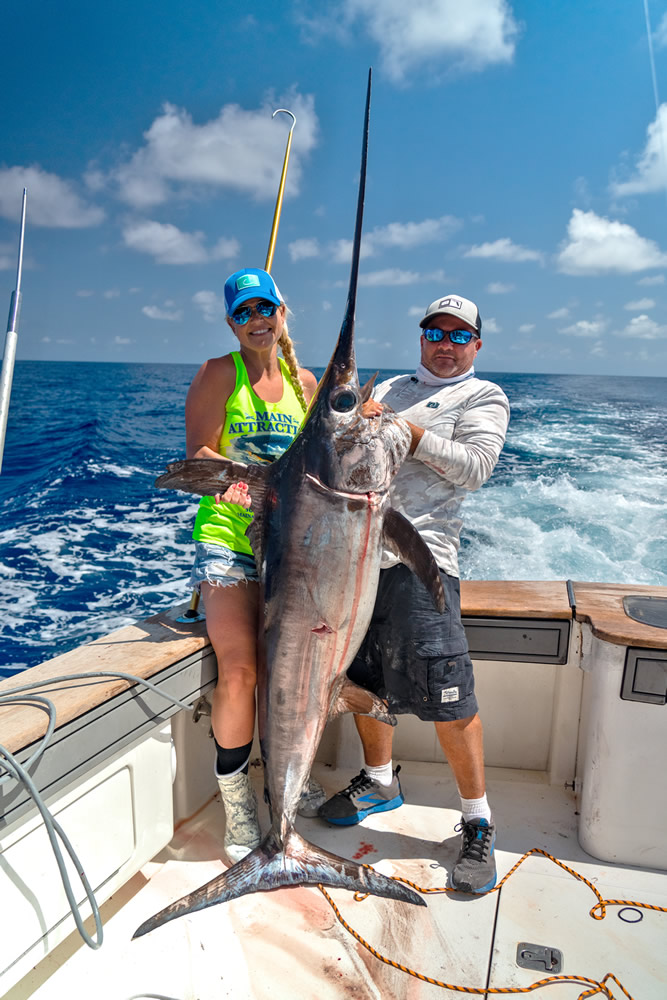 Katie and Captain Marty with the second Swordfish on the day.

Katie couldn’t believe it; after two decades of trying, she had not only caught her Swordfish, but now she had two!

Swordfish provide a lot of meat, so they graciously shared their haul with a long list of friends and family in addition to what they stored for themselves. One of Katie’s rules of thumb is never to kill more than you can eat or share. She recognizes the sacrifice these two beautiful animals made and would never be wasteful with that bounty. There were at least 20 people that would enjoy the Swordfish meat with their friends and families that evening.

When asked if the experience was worth the 20-year wait, Katie exclaimed with a resounding Yes. Katie explained that her desire to catch a Swordfish got her out on the water, allowing her to make many other memories that she will always treasure.

The takeaway from this story is to get out there and have a good time. We all have our bucket lists and goals when we go fishing, but getting out there and having fun with people you care about is what it is all about. If you wish to make your own memories by fishing in the beautiful Florida Keys, do not hesitate to reach out by phone at (305) 289-0071 or via our contact page. 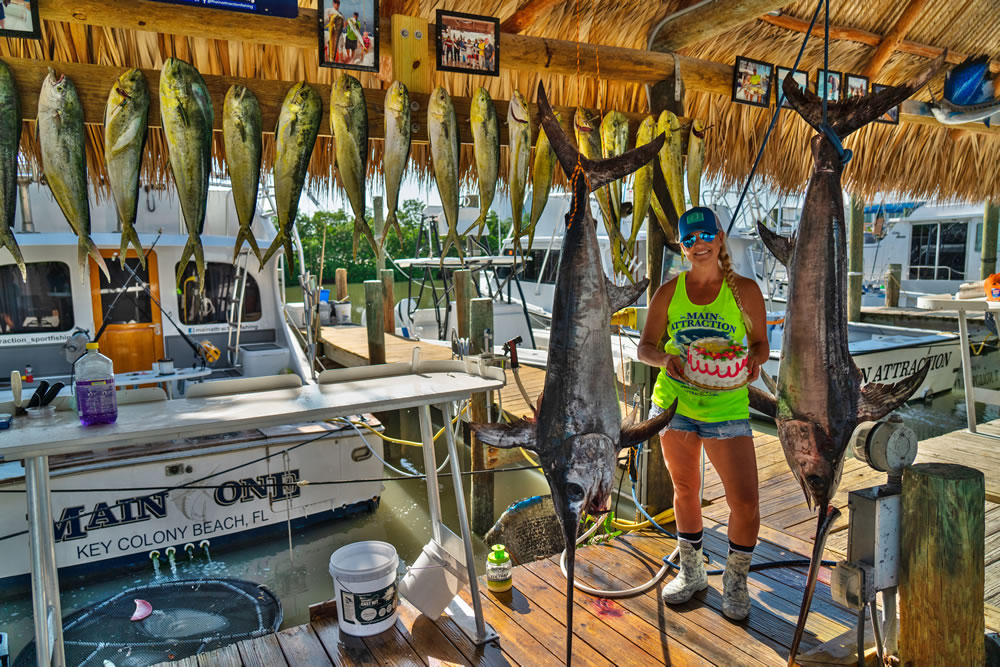 Katie is ready to enjoy some Birthday Cake after a good days work.