On January 6th, 2021 Main One had a full-day trip scheduled with one of our long-time customers, Mr. Cookie Rice. He brought along his daughter, Sally, son-in-law James, and a few neighbors to enjoy a beautiful day out on the water. The crew started heading offshore with live-wells full of bait to target large Blackfin Tuna. Live baiting on the hump can be extremely exciting but also challenging when there are large hungry sharks in the area.

We had several anglers over the age of 70 years old for this trip, and fighting the large Tunas while trying to keep their quarry away from ferocious sharks was a bit too much to handle. Captain Marty adjusted and took them to one of his deep drop spots instead to try for Queen Snapper.

A Queen Snapper almost looks like giant goldfish, with large eyes and long pink and red bodies with a beautiful golden hue.

Queen Snapper is not considered a common catch in the Florida Keys as it takes some skill to find them, but their delicious, mild-flavored, flaky white meat is well worth the work! 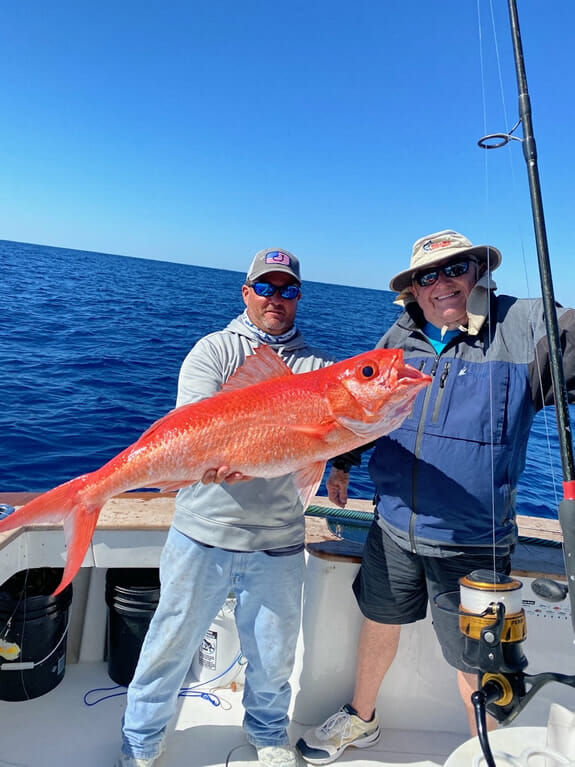 Cookie has charted with Captain Marty for over 3 decades!

With two electric Hooker reels stationed near the transom, first mate Lance set them up to deploy. Using a large lead weight and a chicken rig, Lance attached Bonita strips and Squid to the hooks and dropped the lines in the water.

The Queen Snapper were hungry that day, and they hit the baits one after another. All the anglers on board took turns operating the reels and thoroughly enjoyed adding a new species to their bucket list. Once the crew had enough meat they headed in all smiles.

At the time of writing this article, our local regulations have a 10 bag limit on Queen Snapper with no minimum size required. Always check your local fishing regulatory website as these limits can change. 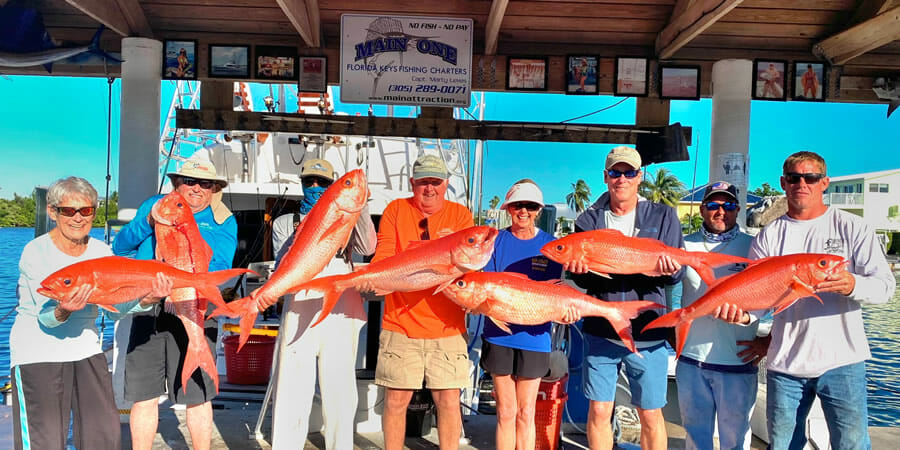 Cookie with his friends and family after their charter aboard the Main One on January 6th.

How We Catch Queen Snapper

As mentioned earlier we use Hooker electric reels. We rig our main lines with 80-pound PowerPro braided line, as it is dropped in a depth of 750-850 feet for Queen Snapper. Since the Braided line does not have the stretch and flex that Monofilament has, it makes it easier to detect bites from so far down.

The reduced diameter of the braided line also allows for more line on the reel letting us fish at greater depths and less drag on the line from the ocean current.

The Chicken Rig mentioned earlier is a rig that we make ourselves using 300-pound monofilament, crimped together with multiple large circle hooks, glow beads, and a swordfish/deep drop flashing light.

To drift properly to catch Queen Snapper the Captain needs to understand the direction and speed of the current that day and how it will affect the bait and line.

The Captain also needs to factor in the speed and direction of the wind and how it will push the boat. Once the boat is drifting properly at the right speed, the mate lets out enough line so that the lead weight on the end of the rig is bouncing off the bottom.

Once you are drifting correctly and if you are in the right location, you will see that rod tip-tapping consistently, and at that point, you know you have a fish and should immediately start bringing it up. The rod tip will consistently tap as the reel retrieves the line. If it stops tapping, the fish has likely come off or the sharks just had a snack. 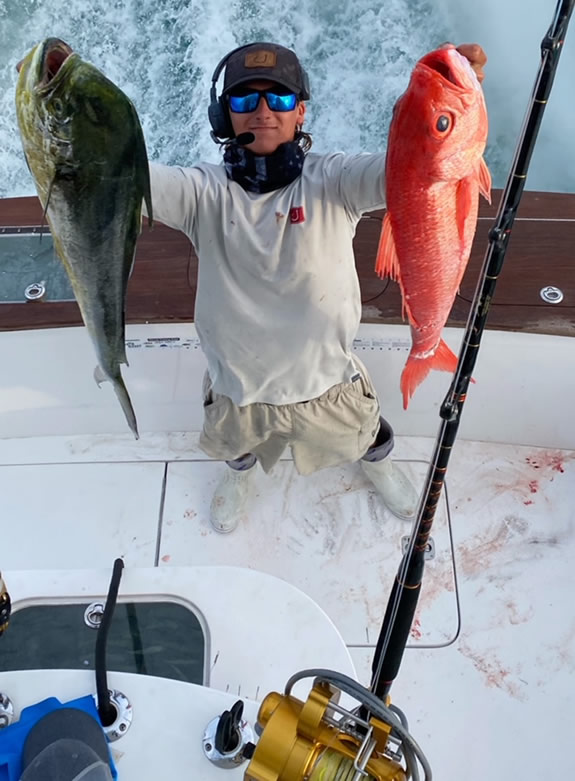 Mate Lance holding up a Queen Snapper and Mahi caught aboard the Main One.

Later on in the  week we fished with Dominick and Jenny Ferels who booked an offshore trip for Jenny’s Birthday. Dominick is no stranger to fishing, as he owns his own charter fishing business up North.

Our crew headed offshore with Dominick and Jenny and got off to a great start as they caught three Wahoo and a nice bull Mahi which isn’t typically caught this time of year.

Then they tried their luck for Queen Snapper. Jenny’s 40th birthday was a memorable one as they caught one beautiful Queen Snapper after another. They had lots of high-quality fish to take home and even shared some with our crews. Thanks! 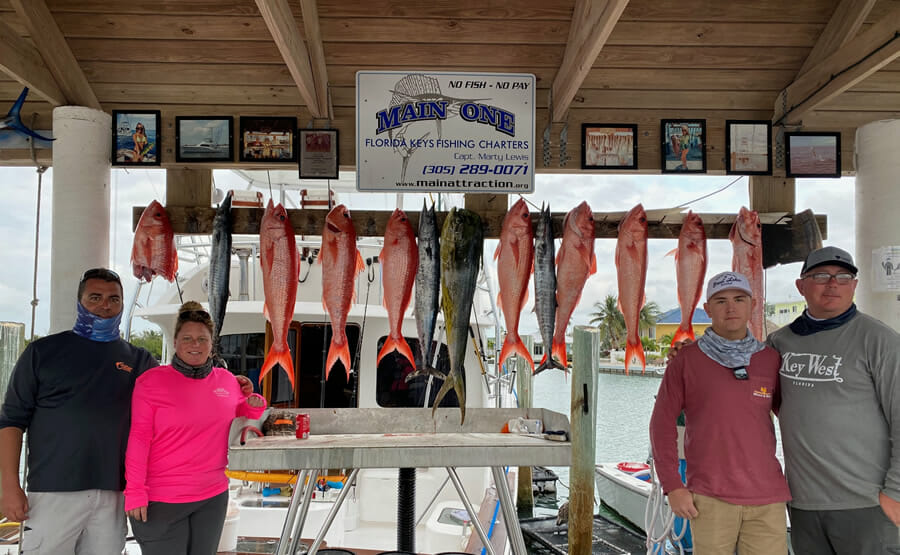 The Ferels and their catch of the day!

Fishing With The Lewis Family

Just coming off the holiday season, our boats have been booked solid running double trips daily. While we typically see the charters slow down the beginning of January after the holiday season that has not been the case this year as our bookings have remained consistent.

Captain Marty had one day open this past week, and the weather looked calm, so being the nice guy he is, he took his wife Katie, and young daughter offshore to try for Queen Snapper. This type of fish isn’t caught as often as others, and it is a fish Katie hadn’t yet crossed off her bucket list.

The crew got up very early and headed offshore to set up for deep-water drifts. Within minutes they were hooked up! A rainstorm blew in on them so they moved position to avoid the weather. After repositioning they caught several more Queens that morning and headed back to the dock to clean their catch for dinner that evening. The video at the top of this article was all shot during that trip. 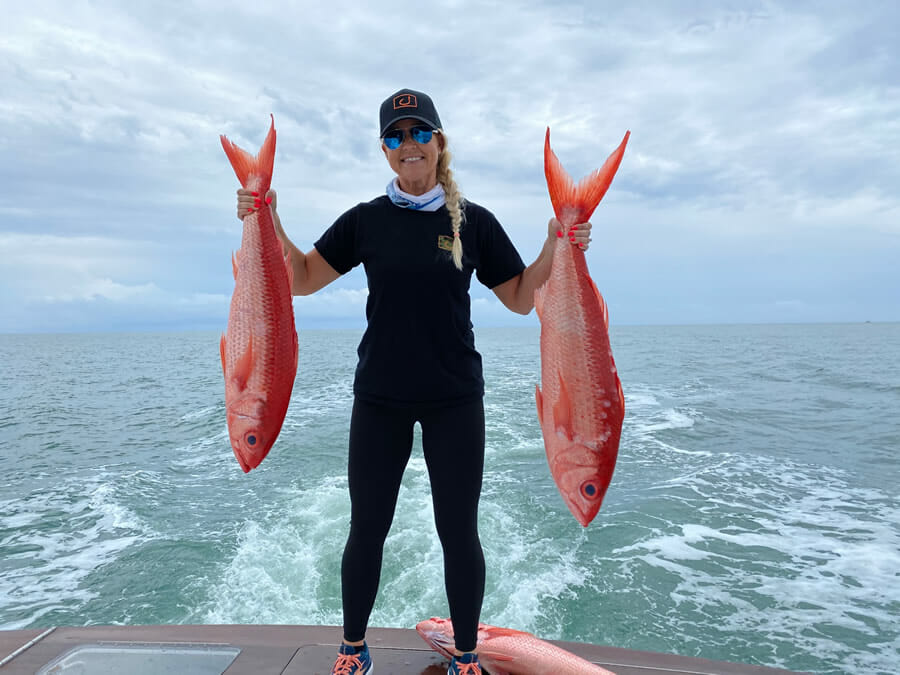 Katie Lewis checking another species off her bucket list!

With 2021 off to a great start we look forward to all the wonderful memories we will make with our clients this year and would be thrilled for you to join in on the fun! If you are heading to the Florida Keys and would like to take a crack at these wonderful eating fish and everything else the ocean has to offer, give us a call at 305-289-0071 or visit our contact page and let us know! 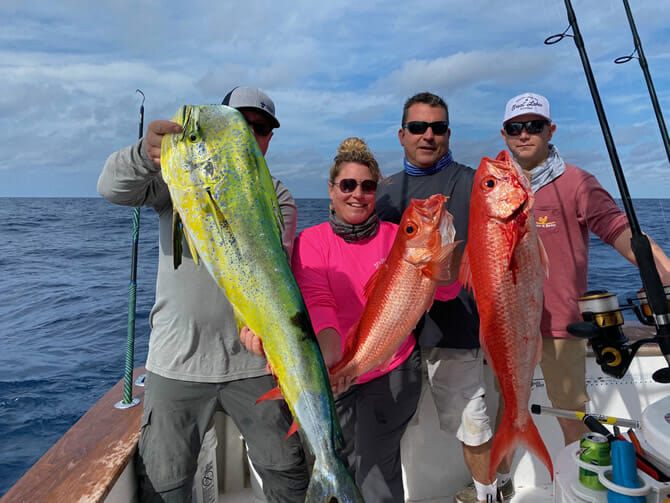 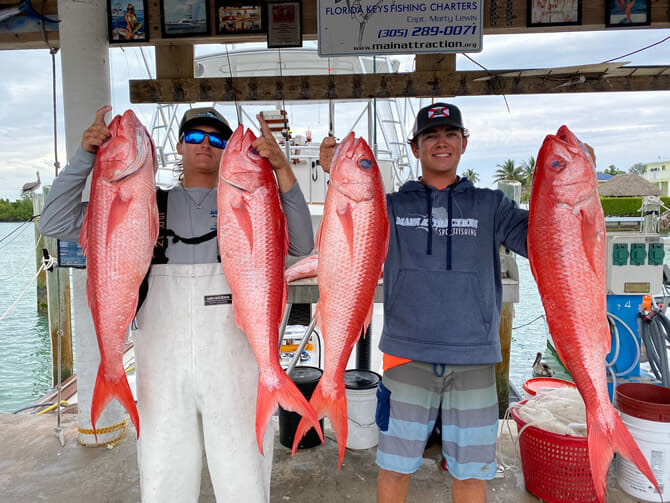 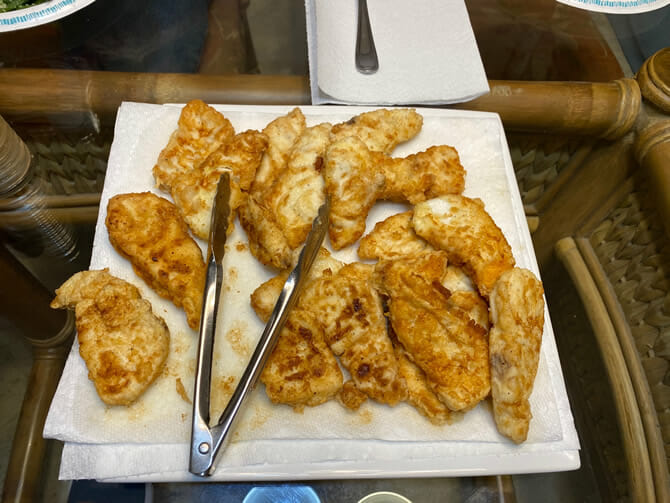 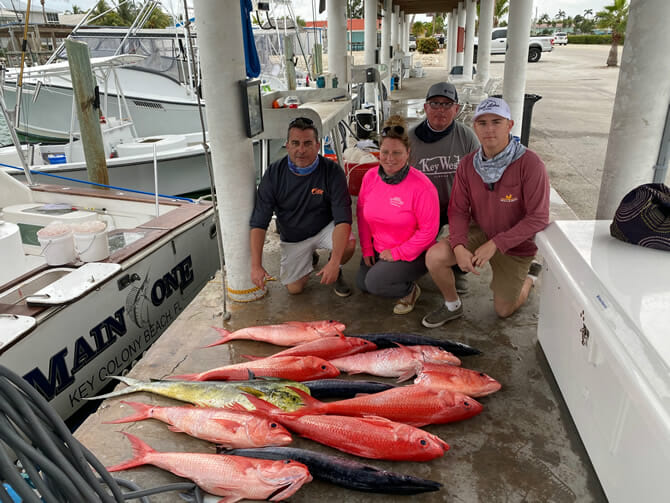