Earlier this week Main Attraction had a day open for the Main One, their 49-foot sportfishing vessel. Owners Captain Marty and Katie Lewis decided to take it out for a day of fun fishing with some crew members, friends, and family.

They headed offshore on a very calm day and decided to drop some baits down to the bottom in deep water. Katie’s friend Carlin, father Fred, and son Alex had never caught a Queen Snapper and wanted to cross that species off their bucket list. The Queen Snapper have been chewing pretty good lately, and with it as calm as it was, it was the perfect opportunity to try.

The day was absolutely beautiful, the sun was shining, it was 75 degrees, flat seas, and barely a cloud in the sky. It was about a 45-minute run to reach the deep water, but well worth it. With the two Hooker Electric Reels set up on either side of the transom, Captain Dave and First mate Lance sent the baits down to the bottom. Within seconds, first mate Lance was hooked up and the anticipation of what they had on the rod was on everyone’s mind.

As the chicken rig got to the rod tip, they could see the reddish pink fish on the hook. It was a mature Queen Snapper and just like that the day was already made! Queen Snapper is one of the prettiest deep-sea fish and so delicious to eat. 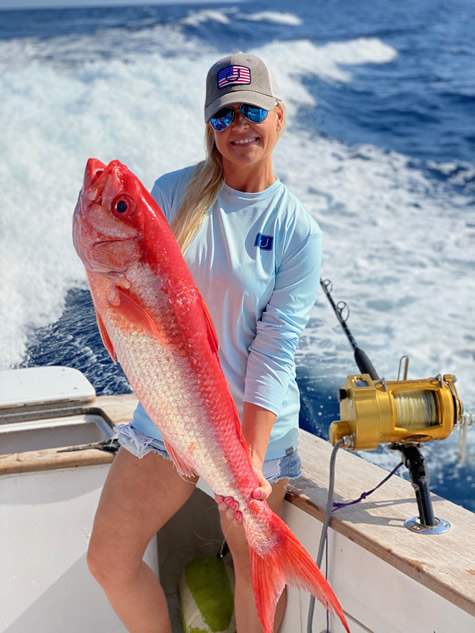 Katie Lewis with the first Queen Snapper of the day.

The team kept at it over the next hour, everyone on the boat taking turns running the rods, helping rig the baits, gaffing fish, etc. Their work was rewarded handsomely with another Queen Snapper and two large Barrelfish!

Barrelfish is a real treat, they have a firm, dense flaky meat that tastes almost like a cross between crab and lobster. This might be because crustaceans are part of their diet among other creatures such as squid and small fishes. They can be found in depths of 600-1000 feet or more, schooled around underwater cliffs, canyons and plateaus.

The NOAA site says “the Barrelfish has never been seen underwater, at least an as adult.” We did however stumble upon some rare underwater footage that shows Barrelfish swimming over 1,000 feet underwater. Not sure if they are adults, but quite interesting!

Rare footage of Barrelfish 1,000 feet down!

When you bring a Barrelfish into the boat the first thing you will notice is that they are covered in a thick slime.  The slime is a barrier that acts to protect them against parasites and bacteria. Snowy Grouper also have a slime coating when we catch them and perhaps the cold water and depth they live in has something to do with it. Barrelfish are considered a rare catch and shrouded in mystery due to the depths that adults live at. 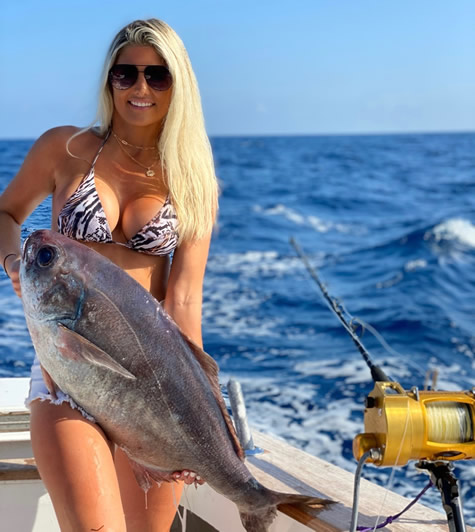 Carlin holding one of the Barrel fish.

The team also caught an unidentified fish, which they later researched and found out was a Beardfish. The fish had two whiskers under its mouth, hence the name.  Our research showed these fish typically live in depths of 2,600 feet which might explain why Captain Marty who has been fishing 300+ days a year for 20+ years of his life had never caught a Beardfish before.

That is the amazing thing about fishing in the ocean especially in the deep water, you can fish it your entire life and still encounter creatures you have never seen before! 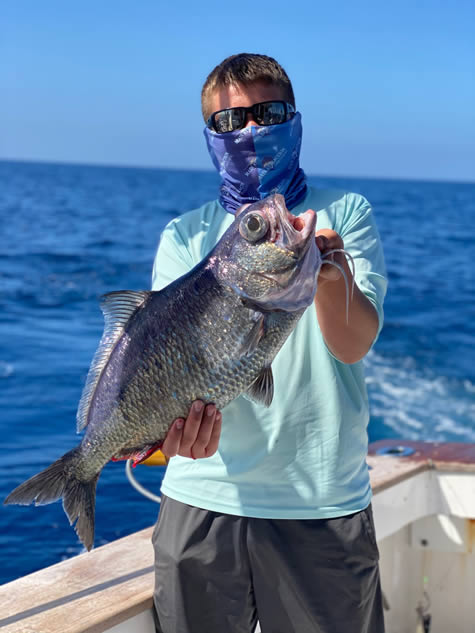 Alex with the oddest catch of the day, a Beardfish.

As Captain Marty headed toward his Swordfish grounds he found some floating debris that had Wahoo swimming near the surface. Unfortunately, the presence of the boat spooked the Wahoo and they disappeared quickly. The crew tried trolling at high-speed around the debris to try to get the Wahoo to reappear and trigger a bite, but no luck.

Once they arrived at the Swordfish grounds they tried a few drifts, but the Swordfish didn’t seem to be very active. There were several boats in the area and it seemed as if it was very slow for everyone. The group did manage to hook up to a smaller Swordfish, but as they were bringing it up, it popped off the hook about 200 feet from the boat. It was frustrating to lose the fish near the end of the fight but Swordfish are notorious for doing that as they have soft mouths and put an immense amount of pressure on the hook as they fight from depths of over 1,500 feet.

Despite losing the Swordfish the gang still had an amazing day deep-dropping for some really interesting critters which many of the group had never caught before. A relaxing day offshore, with great company, and perfect weather is hard to beat.

Once back at the dock they took photos and fileted their catch. Despite only having caught a few fish they had quite a bit of high-quality meat split the filets up between everyone.

The Lewis family had a Queen Snapper for dinner the next evening. Katie used her Piccata recipe that she often uses for Yellowtail and the family reported that it tasted amazing!

If you have never tasted Queen Snapper before and are interested, we highly recommend it. They also freeze very well, and once defrosted are not “fishy” tasting.

If you are interested in catching your very own deep water bottom fish there is no time like the present. Feel free to call us at 305-289-0071 or visit our contact page to book a trip. 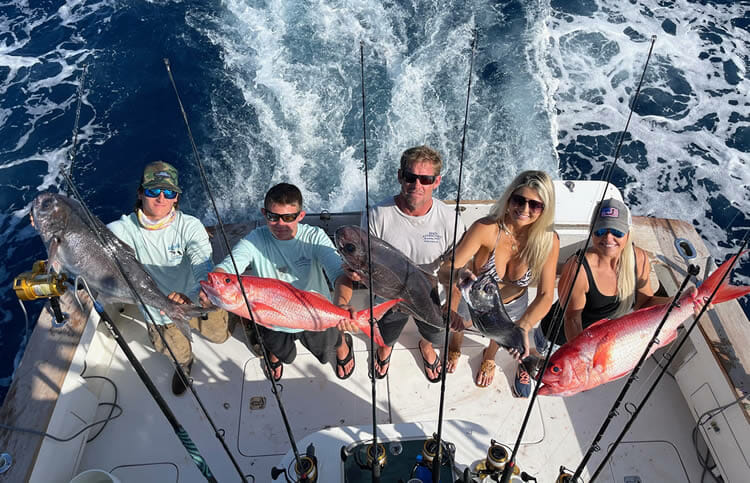 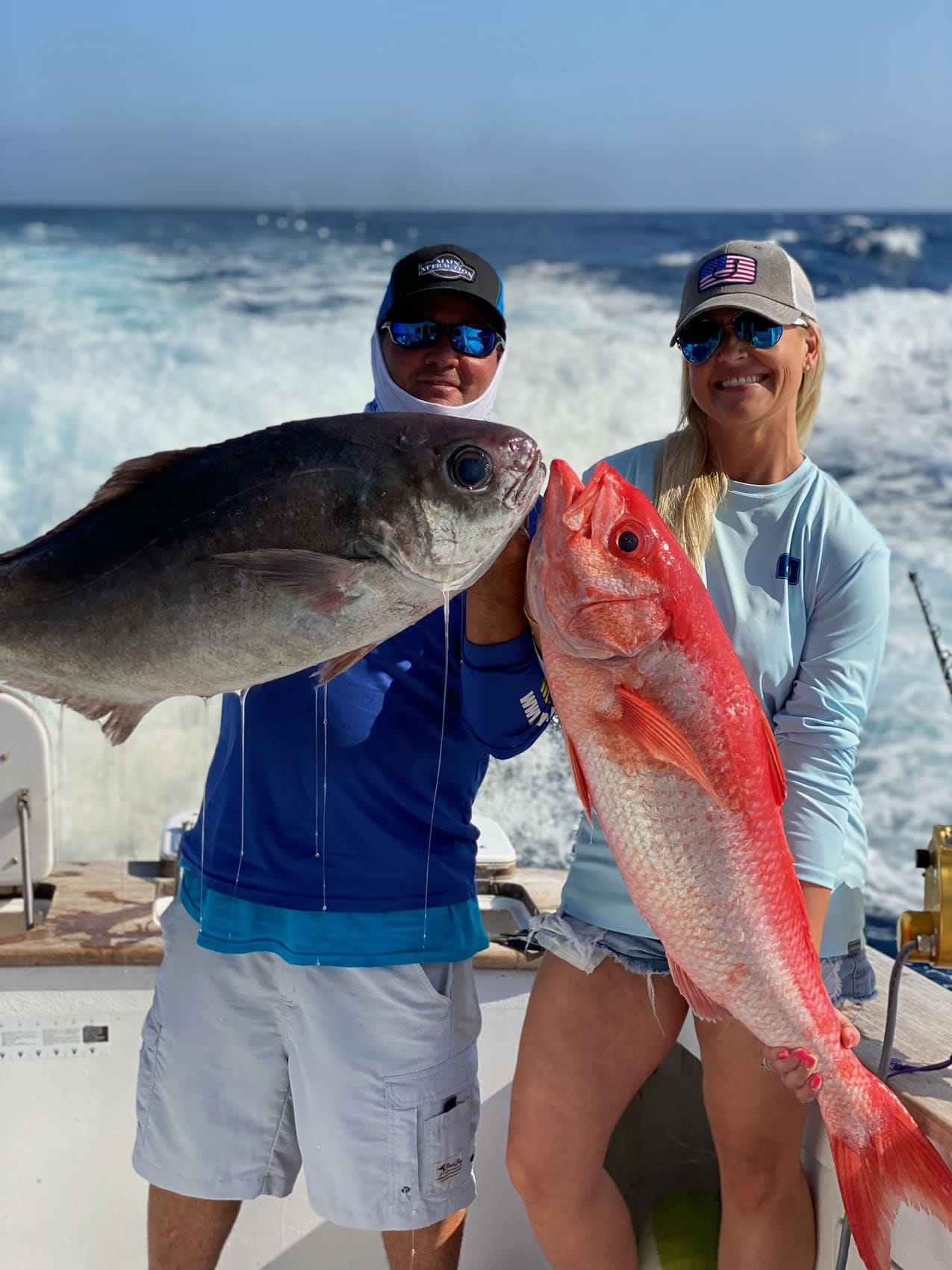 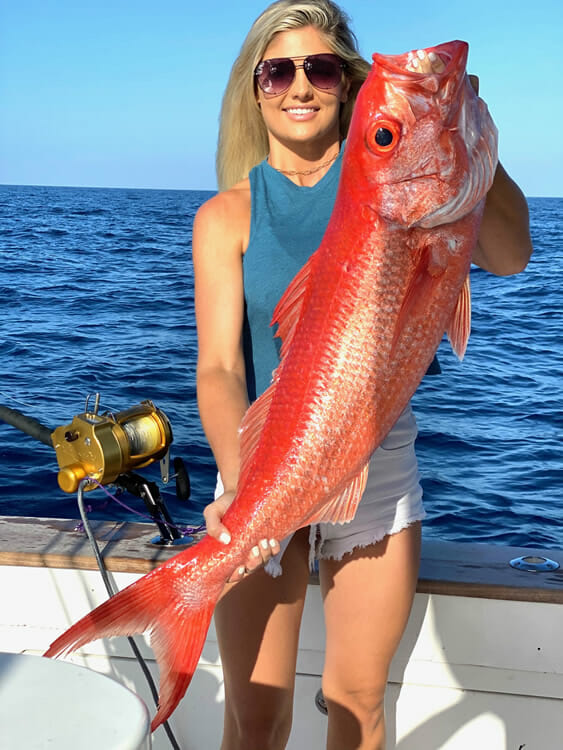 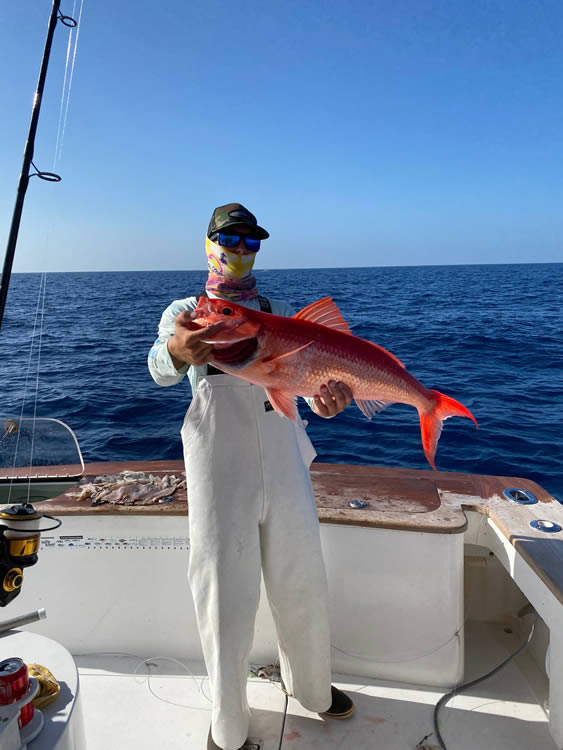 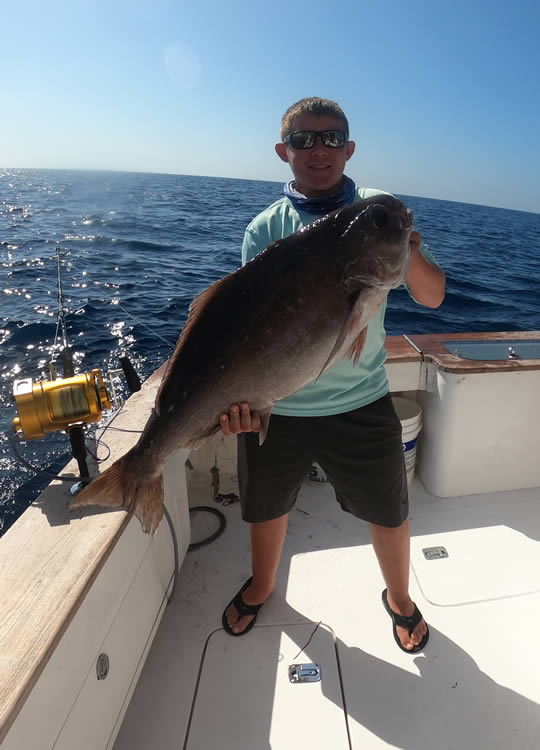 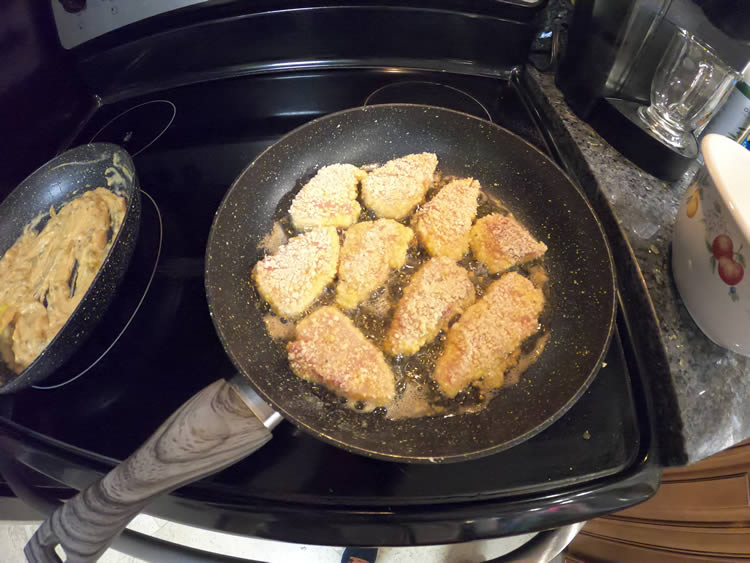 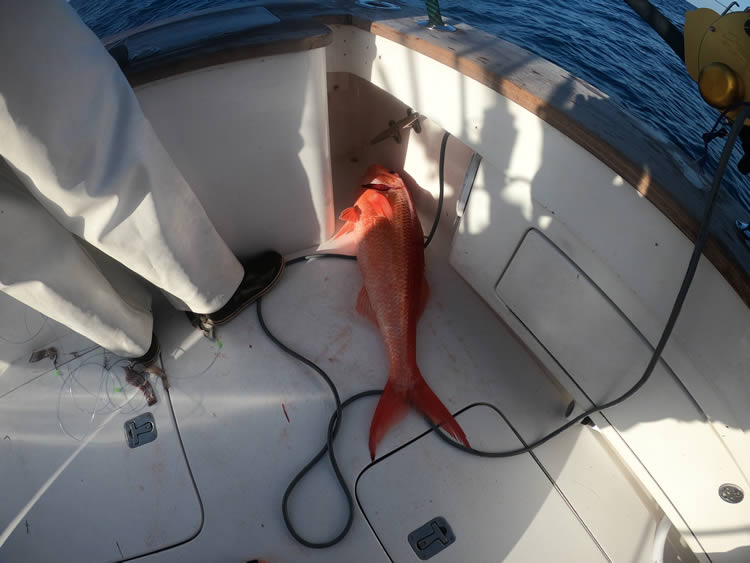 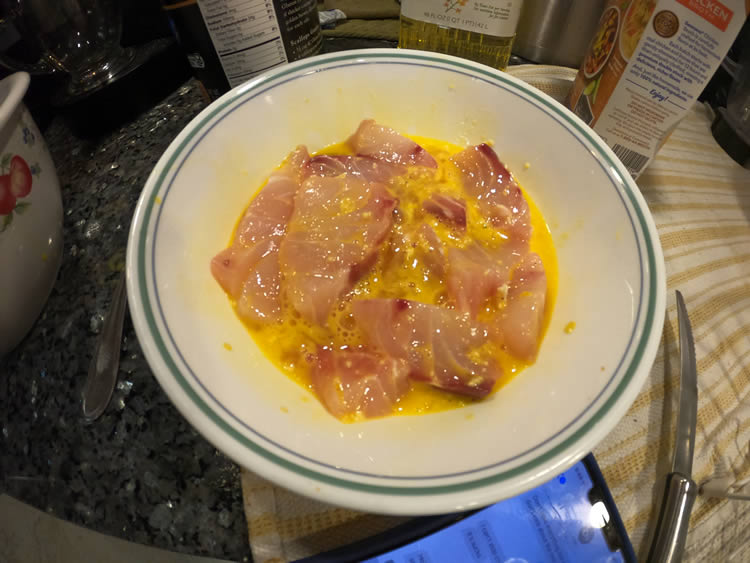