S ummertime is the prime time for Mahi-Mahi (a.k.a Dolphinfish). The Florida Keys see lots of travelers in search of filling their freezer with fresh meat to consume throughout the year. It is also a fun time because many Dolphin tournaments are held throughout the islands which encourages friendly competition among the local fishing crews. Marathon hosts several different tournaments, such as the Marathon Bull and Cow, Mother’s Day Dolphin Tournament (by Habitat for Humanity), and the Father’s Day Dolphin Derby.

The Main Attraction Charter fleet has been fishing Mahi tournaments for years! Typically, these tournaments are held May through July when the Mahi are running and most plentiful. On June 20th, 2020, the Reel Attraction vessel was hired by Dominick Ferels and his good friend Issac to fish the Father’s Day Dolphin Derby. The Mahi fishing had been slow that week as only schoolies (small Dolphinfish) were being caught. Captain Steve and First Mate Jonny were in search of an award-winning fish that day, so they knew they had their work cut out for them. 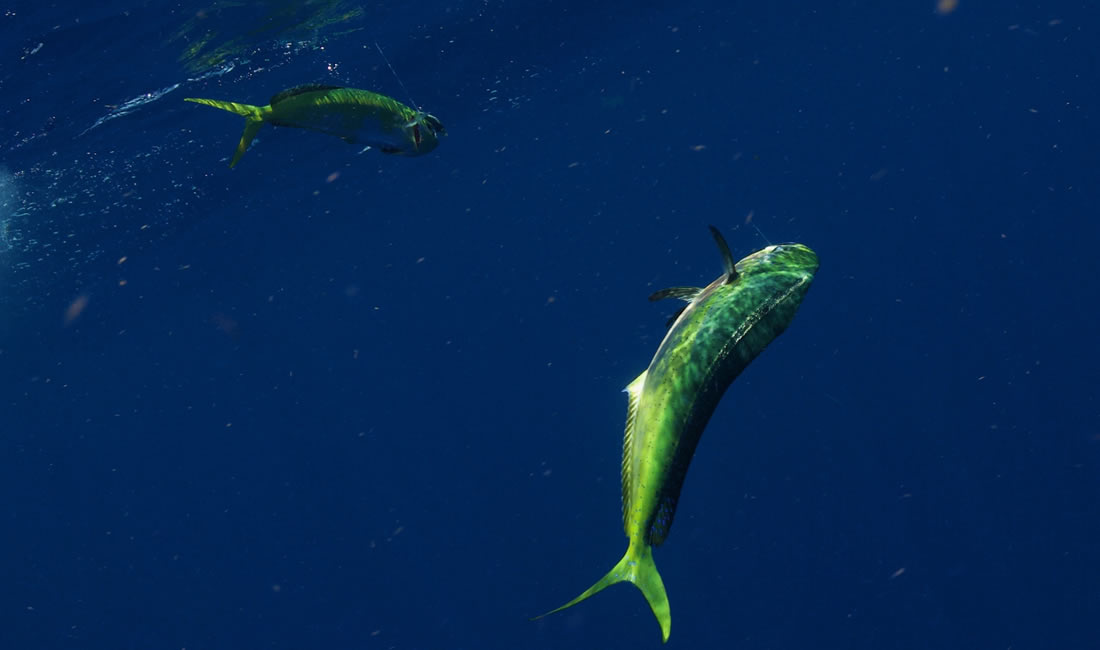 The day started like any other, they loaded the boat with live bait, rigged ballyhoo, and fresh line on all the rods. Their Clients arrived, and they headed offshore to get in a good position for the official “lines in” time-frame. The Fishing was tough, the Florida Keys were shut down for nearly 3 months during the pandemic and June 1st they reopened the Keys which meant a lot of boats trying to make up for lost fishing time and lots of pressure on the fish that were available. Adding to the challenge the weed was very scattered that day and not formed into troll worthy lines by the current. Adding to the challenge there was not a lot of big fish around which meant no sets of 2 or 3 frigate birds following big Slammer Dolphinfish.

Although the conditions were extremely unfavorable and frustrating, Captain Steve and Mate Jonny kept grinding, looking for weeds, floating debris, and birds working the surface. It was about mid-day and still just schoolie Mahi had been found. Schoolie Mahi are wonderful for a regular charter, they are fun to catch and can fill the coolers with a lot of good eating fillets. When you are in a tournament, you will often need to leave these smaller fish to find bigger fish that will put you on the leaderboard.

This is what Steve and Jonny did and finally, they found the fish they had been looking for. Captain Steve spotted a large bull and a cow swimming from his tower. They pitched a live bait right in front of the bull who readily ate and it was game on! There was another boat close by fighting another fish so Steve had to maneuver the boat carefully until they managed to boat the big bull Dolphin. The guys knew this fish would make or break the day. When fishermen are offshore, you usually hear the constant chatter of other boats and Captains discussing what they are catching, and that particular day not a lot of fish had been caught. Even with that fish now in the boat, the guys continued to keep looking for more fish to ensure the best odds of a win.

About 15 minutes after lines out, Captain Steve sent a group text to the Main Attraction Fleet of his anglers holding the big bull, and right away all the crew started to congratulate him. We all knew he could very well be in the lead and possibly win the whole thing. 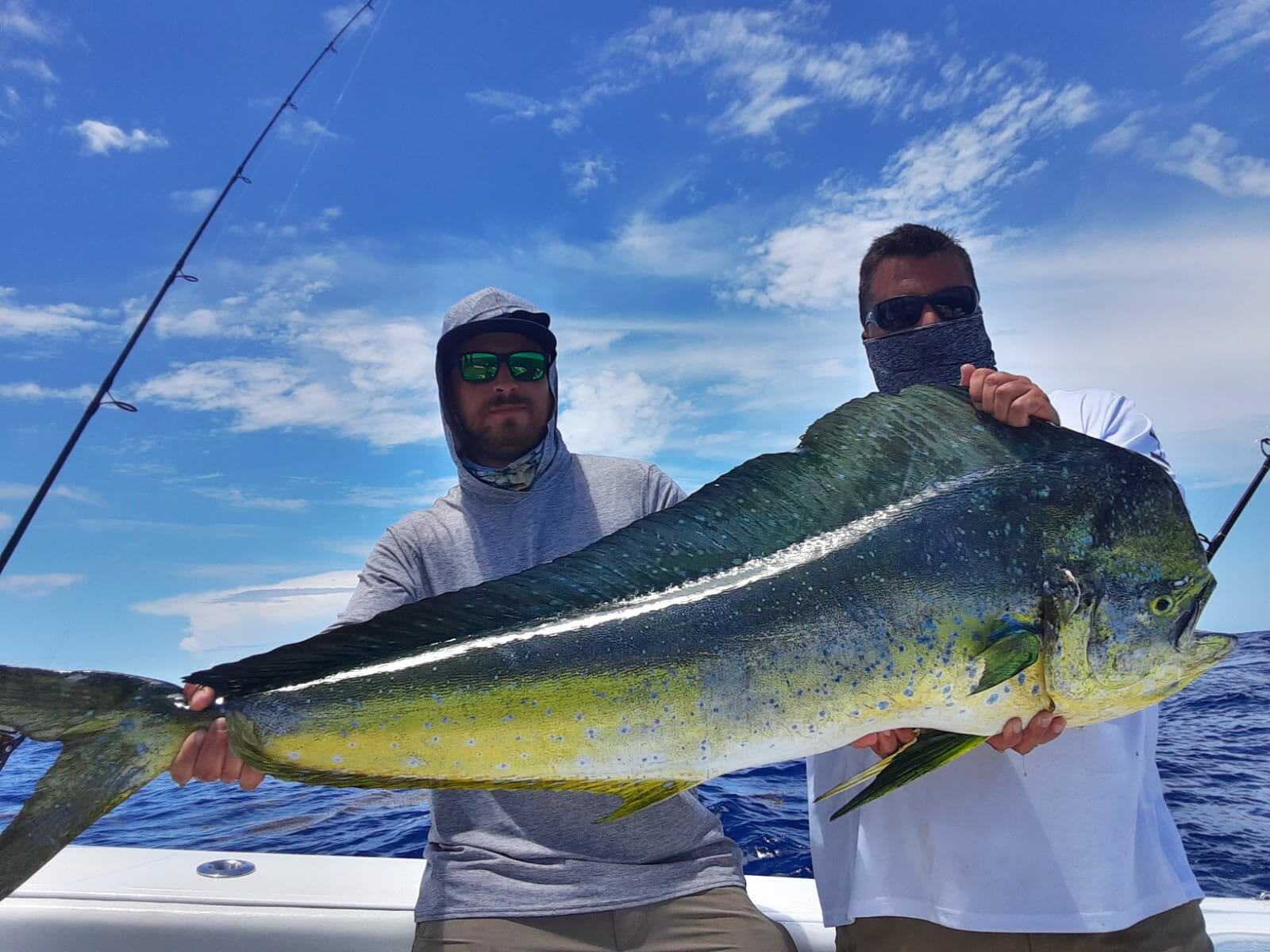 When Reel Attraction arrived back at the dock, they had plenty of time to offload the fish and take them to the weigh-in. For this specific tournament, the Calcutta (side bet) was for the biggest Mahi and best two Mahi fish. They weighed in the big bull, caught by angler Issac, and it weighed over 30 pounds, putting Team Reel Attraction well in the lead. They weighed another schoolie to get a two fish weight on the board. The next hour of weigh-in was nerve-wracking for the guys, wondering if any of the other great competitors had caught a larger Dolphinfish.

That evening Team Reel Attraction attended the awards ceremony at Florida Keys Aquarium Encounters. They were presented with 1st place overall catching the largest dolphin of the tournament. They also won the Calcutta with the largest combined weight for 2 fish. Dominick has already rebooked for next year and we look forward to going after the title again! If you wish to inquire about Tournament fishing with the Main Attraction call us at 305-289-0071 or visit our contact page. 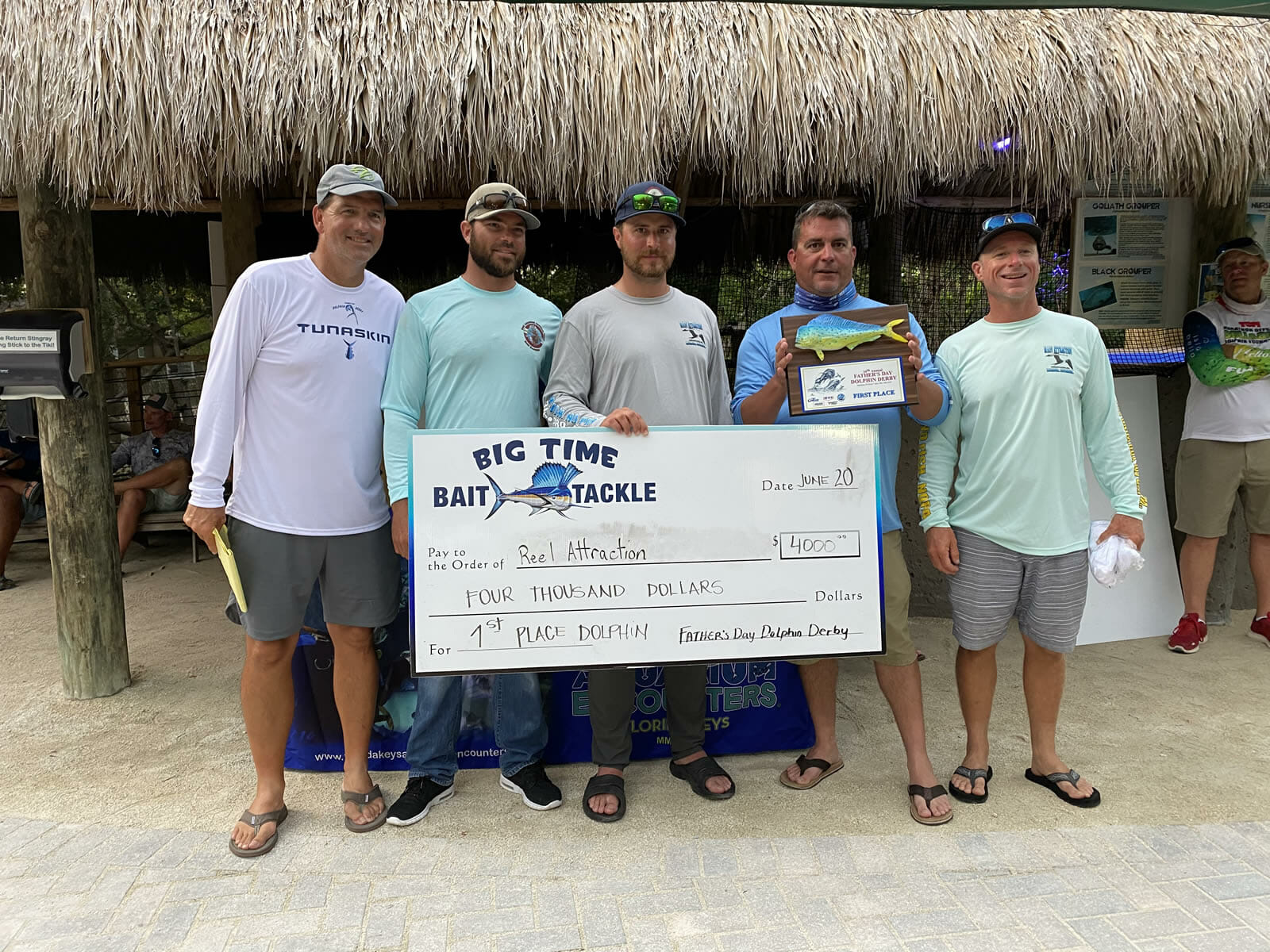 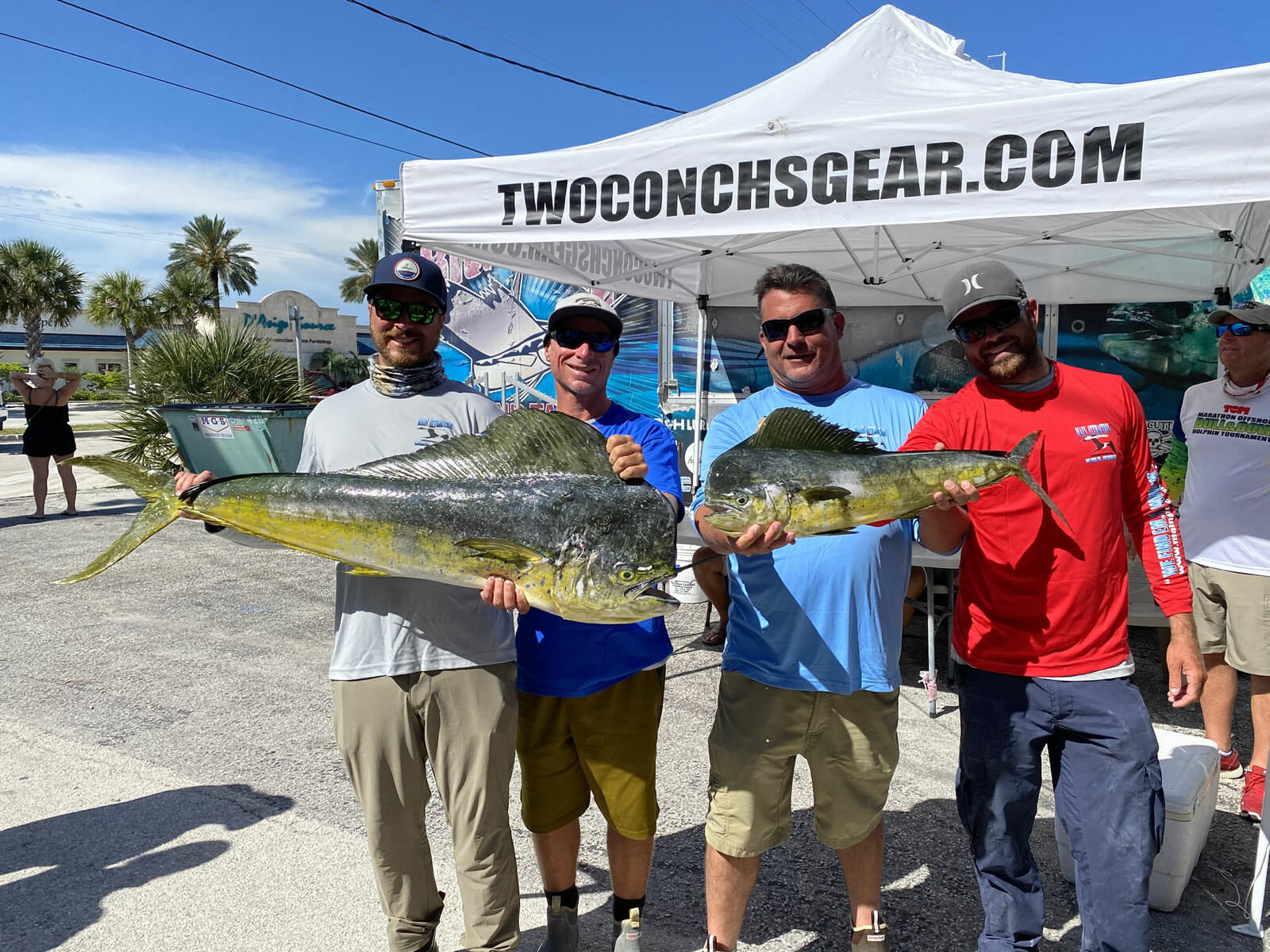 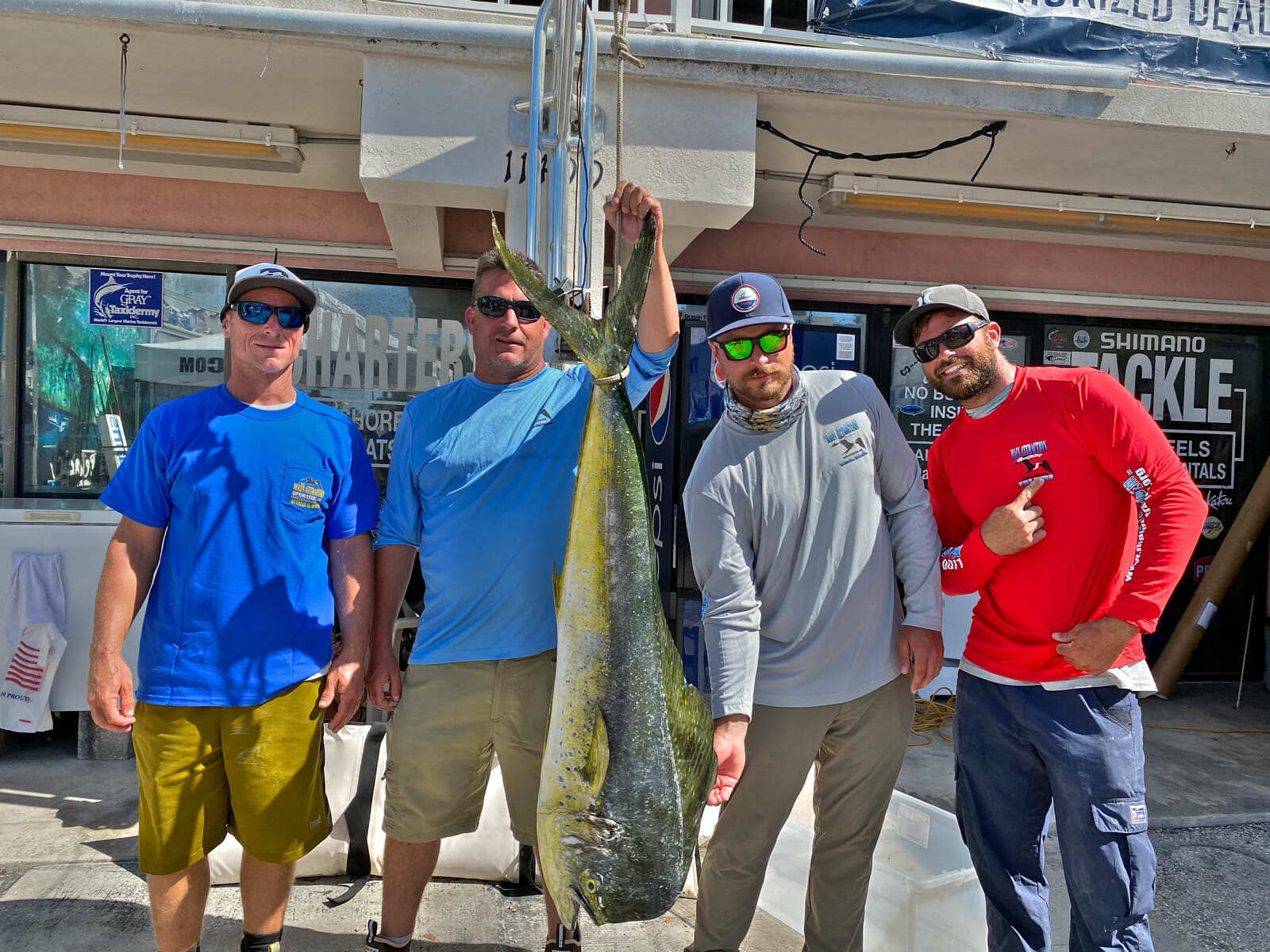