Last weekend was one for the books! The 1st Annual Marathon Premier Sailfish Tournament was held in Marathon, Florida Keys. This non-profit organization was established by Main Attraction co-owner, Katie Lewis. The tournament aims to showcase local talent, bring a much-needed sailfish tournament to Marathon, and raise money for a fantastic cause. This year’s charity of choice was Mission Fishin, a south Florida-based charity that helps special needs children and their families get out on the water and fish, take boat rides, and eco-tours.

All four of Main Attraction’s vessels were registered to fish for the tournament by some of our regular customers. As the dates got closer, we became more concerned as the weather reports changed and the winds began to blow harder every day. We knew our vessels could take the rough seas, but we also want our clients to have a good time. Rain and strong winds can hinder the fun of a fishing trip. We have some pretty tough clients, and they said they were all up for fishing it. Katie Lewis took a poll of the other registered captains and teams during the kick-off meeting, and the overall feedback was a resounding yes to fish the tournament despite the weather. 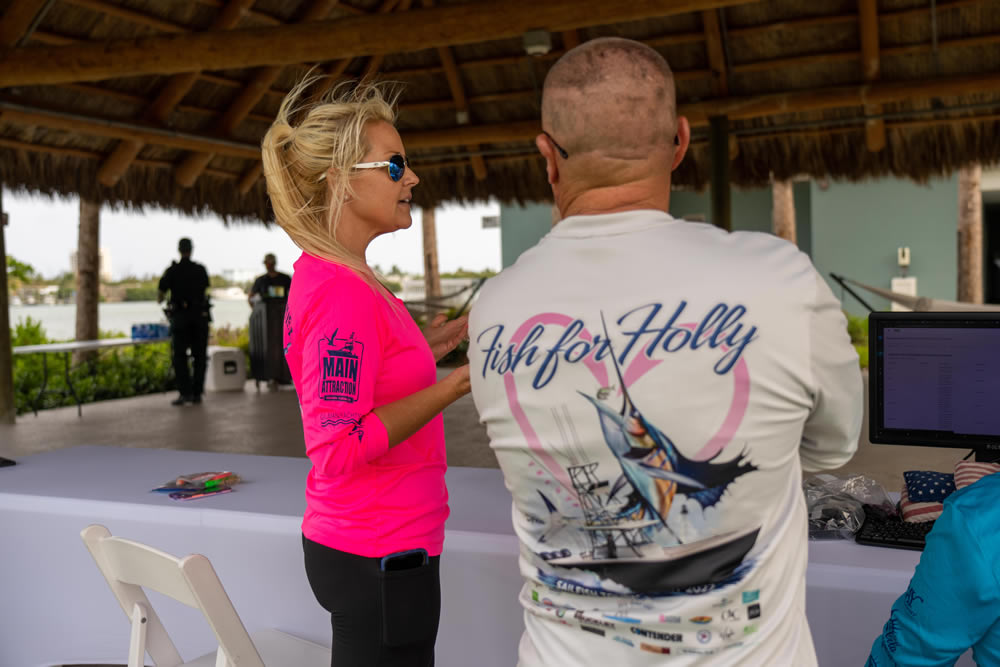 On the morning of the 1st day of the tournament, April 22, 2022 it was raining heavily and winds were gusting up to 30mph. Despite the conditions, nearly every boat went that morning. At precisely 8 am, it was lines-in, and the tournament had officially begun. There were a handful of hookups in the morning and a release or two, but the fishing was quiet while the boats dealt with the high winds and low visibility. The wind was blowing so hard that the boats that attempted to fly high-wind kites quickly lost them. Eventually, the rains subsided, and in the early afternoon, the weather cleared briefly.

Around 12:30 pm, the sun peaked out from behind the clouds, and almost immediately, one boat after another began to report hookups. In an exciting 10-minute period, five hookups led to four sailfish releases. Amongst those boats were Main Attraction (Team name Sails Call in honor of Jennifer Bowcock’s father), Main Attraction 2, and Reel Attraction. Alexis Bowcock successfully caught and released the first sailfish for Main Attraction and was now sitting pretty for the Female Angler award.

Amid the chaos, Captain Jonathan of Main Attraction 2, also called in that his angler, Dan Scheid, successfully caught and released a sailfish, putting them on the leaderboard. A few minutes later, Reel Attraction, run by Captain Steve, also called in that he was hooked up, later relaying it was just a bonita. The committee boat working the VHF radio was somewhat relieved; they now had anglers and vessels on the leaderboard as the weather let up just a bit. At around 1:45 pm, team Ofishal reported multiple hookups and released three Sails in a half-hour. The wind increased throughout the afternoon, making it even rougher out there. The committee broadcasted Lines out across the radio at 4 pm; it was now time for the boats to make their way back to port in the rough seas. 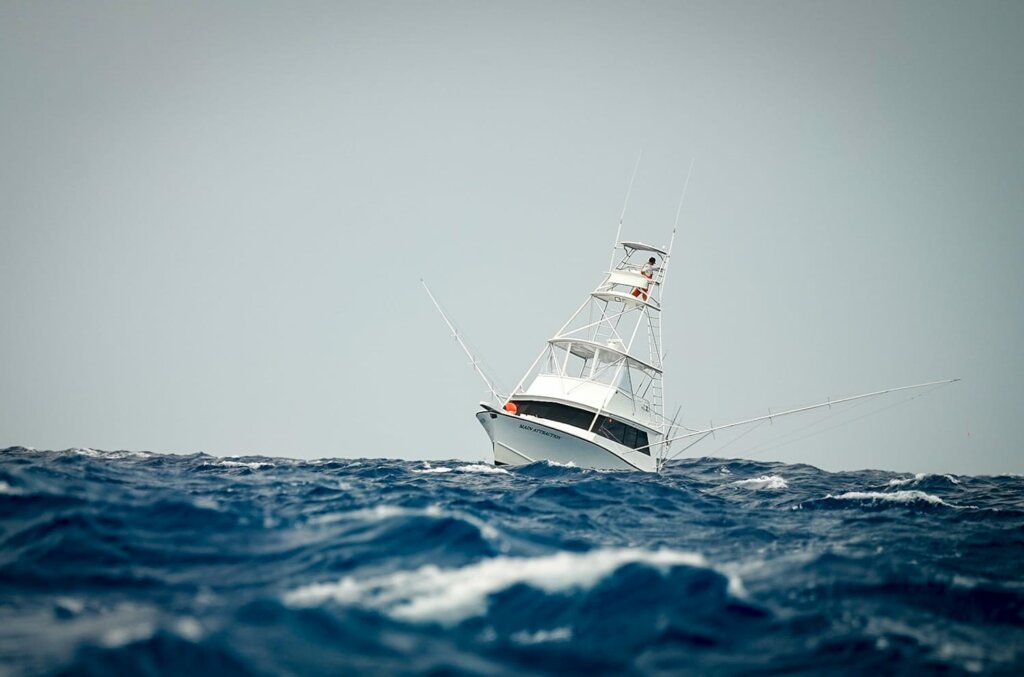 Day two of the tournament came, and the committee boat was in place to announce lines at 8am. Some brief rain showers passed by, but it was nothing like the day before. To their relief, they could see the sunshine peeking through the clouds. When the sun shines, it is much easier for the captains to use their towers to see the sailfish on the surface. Boats started to call in sailfish hookups just before the 10am, which was a relief and what seemed like a better day of fishing. At this point, the tournament had several boats with legal releases, consisting of Big Game Sportfishing, Main Attraction, Silent Hunter/Reel Estate, Main Attraction 2, Ofishal, and No Slack Sportfishing. 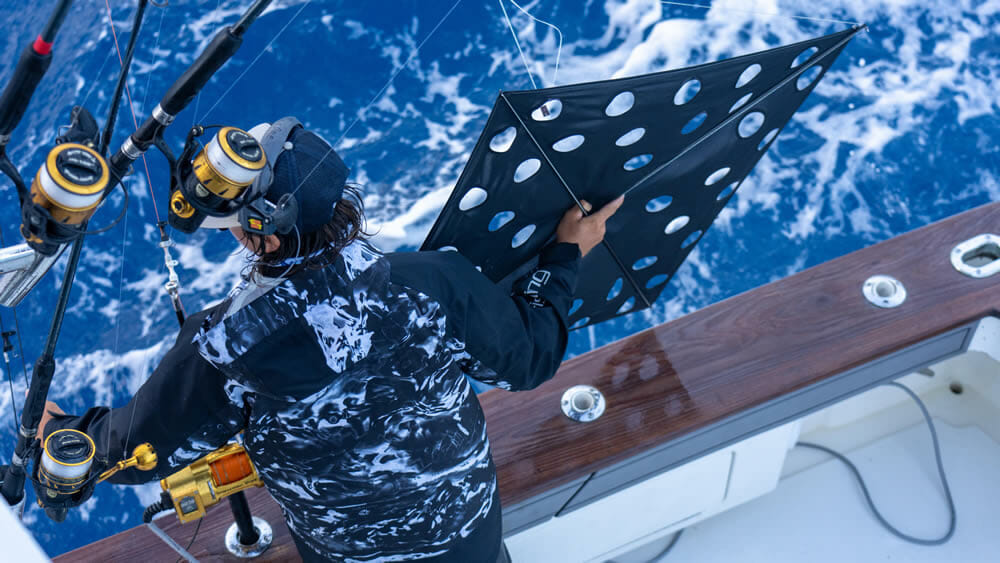 Main One mate Lance Doire putting a kite out on day two with improved visibility and winds.

The radio was consistently active as captains called in hookups and releases for the next hour. The hookups included Teams Blue Magic I with a double, Main One, and again Main Attraction. Miss Alexis of Main Attraction had now caught and released two sailfish, putting her in a pretty good lead for Top Female Angler.

As the afternoon started to slow down, there were releases from Vice Versa and Silent Hunter, but nothing could prepare us for the last 5 minutes before lines out. At 2:57 pm, three minutes before lines out, Captain Ariel of Big Game radioed that he was hooked up and fighting a sailfish. This was an important fish. If his angler Reggie Hiro was fighting that fish and they successfully released it, he would now be the top angler in addition to the team pacing in 2nd overall. The committee boat sat in anticipation, waiting to hear if, in fact, they legally caught the fish. If you are hooked up before lines out, you are allowed to fight and catch the fish for one hour after lines out. Using almost all of their hour to fight the fish, they successfully released the fish at 2:47 pm. Reggie Hiro had now cliched the top male angler position and cemented team Big Game’s 2nd place overall finish.

Although the Main Attraction boats did not place overall, Miss Alexis Bowcock won the top lady angler aboard Main Attraction, and we couldn’t be happier for our fellow fishing friends and companions. The final standings were Team Ofishal in first place with 4 releases, Team Big Game in second with 3 releases, and Team Blue Magic  in third place with 2 releases. 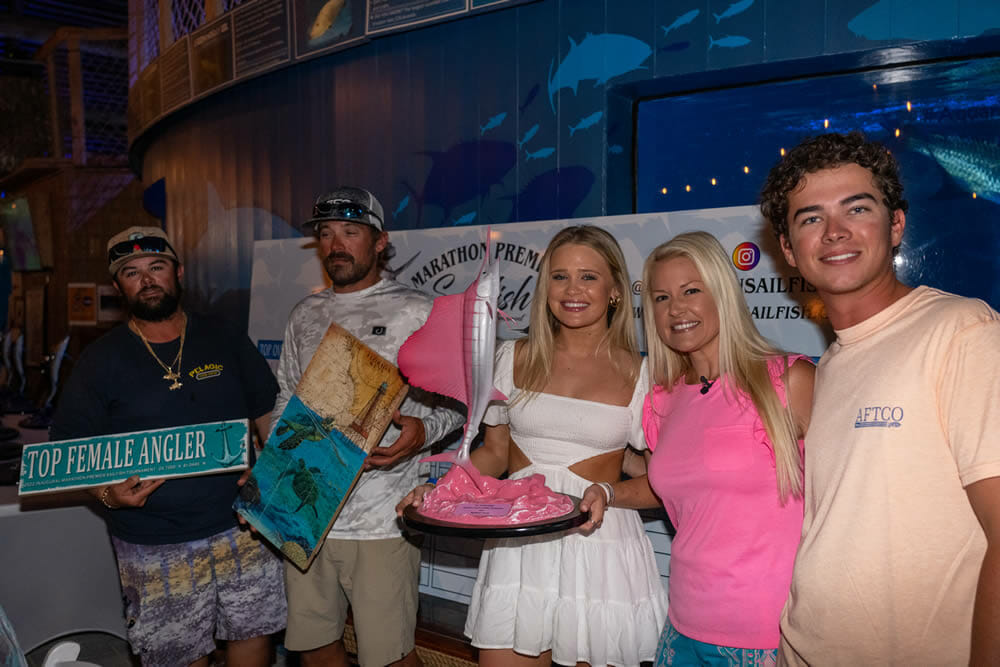 The awards banquet was held at Aquarium Encounters, and everyone had a great time. The food was delicious, and the attendees participated in a raffle and silent auctions to raise money for Mission Fishin’.

The Marathon Premier Sailfish Tournament is coming back in April 2023, so if you are interested, reach out and reserve your Main Attraction vessel by calling 305-289-0071 or visiting our contact page. 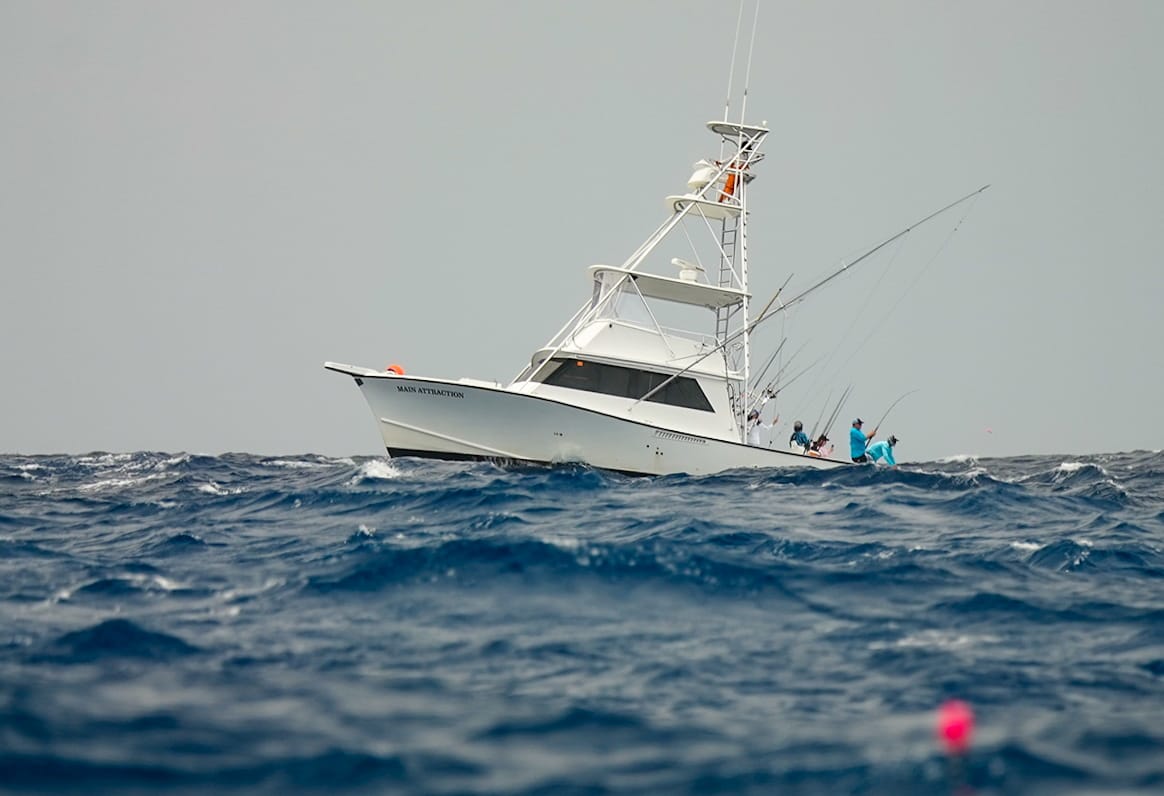 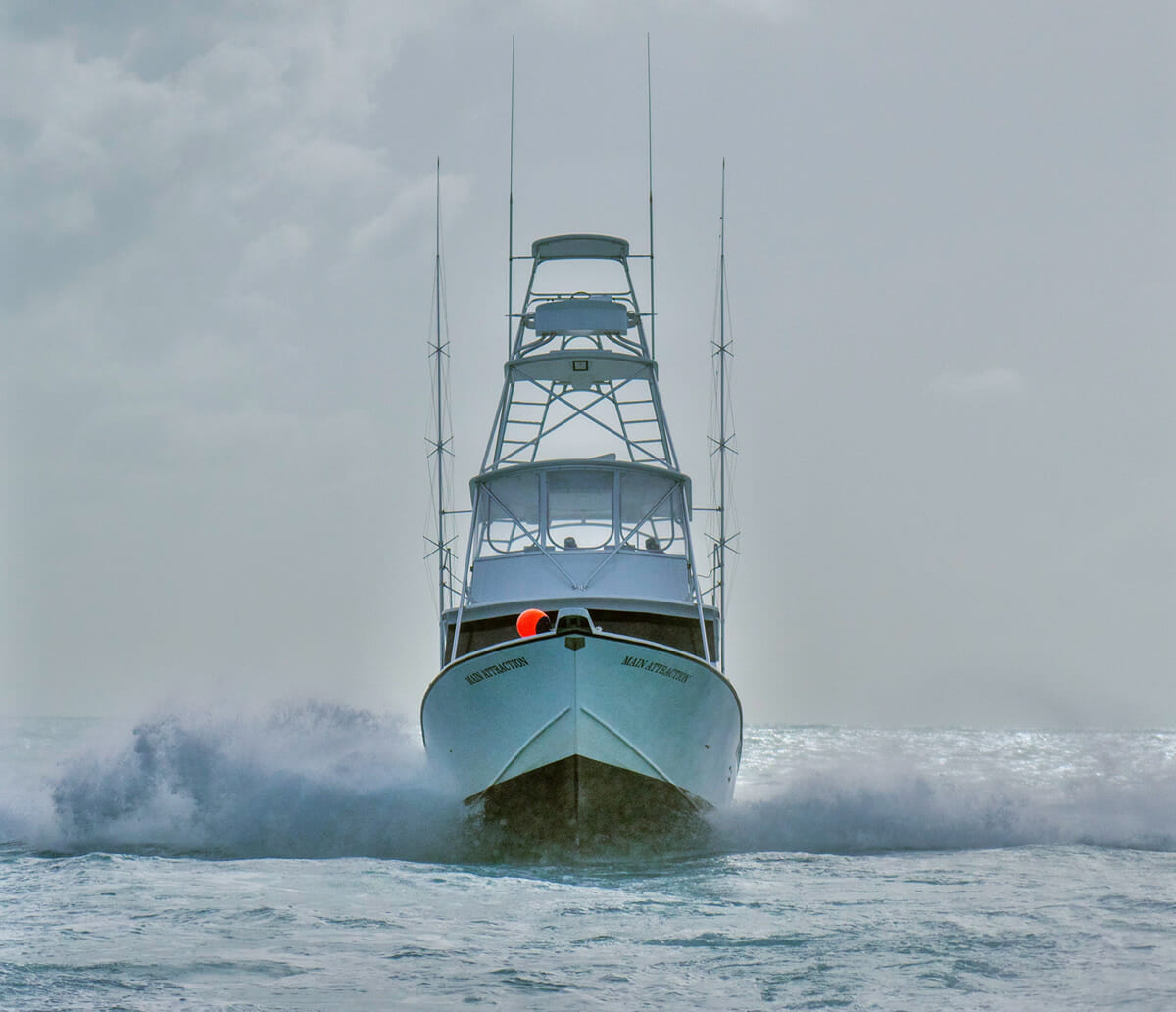 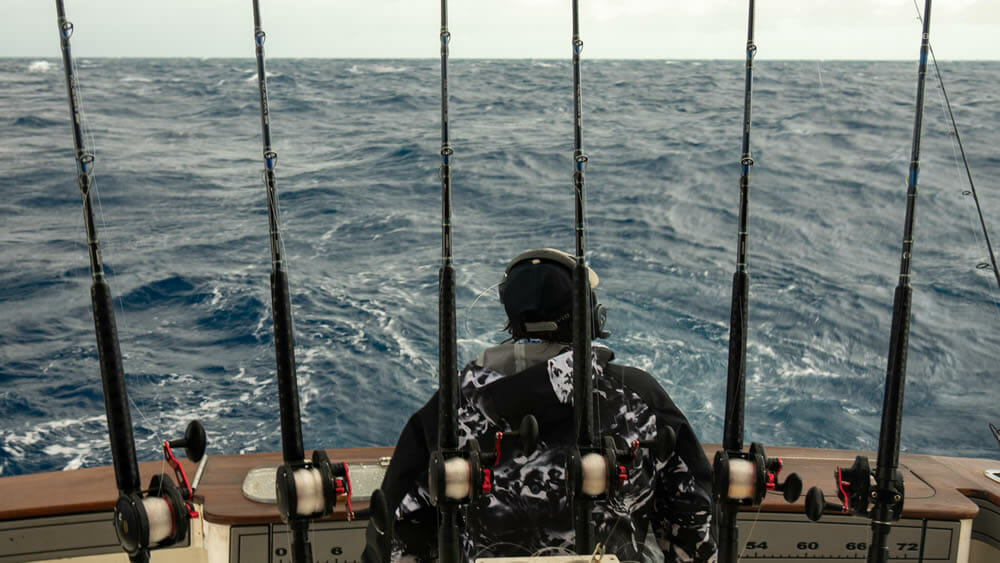 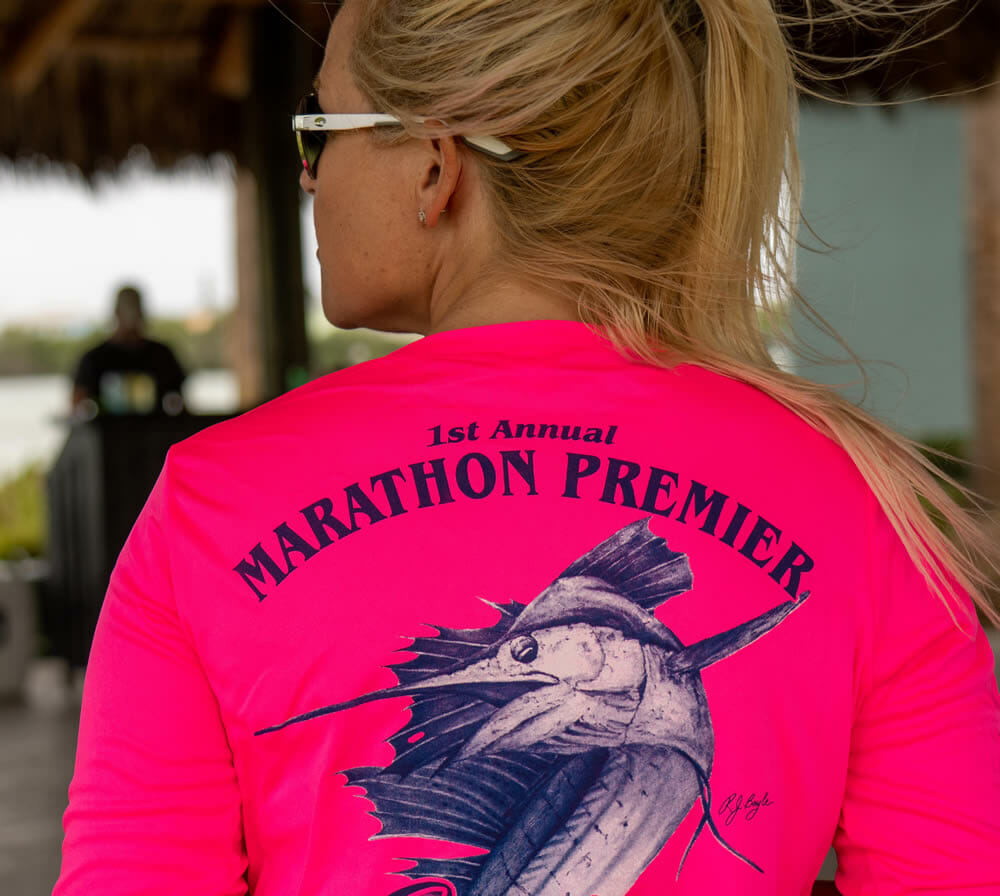 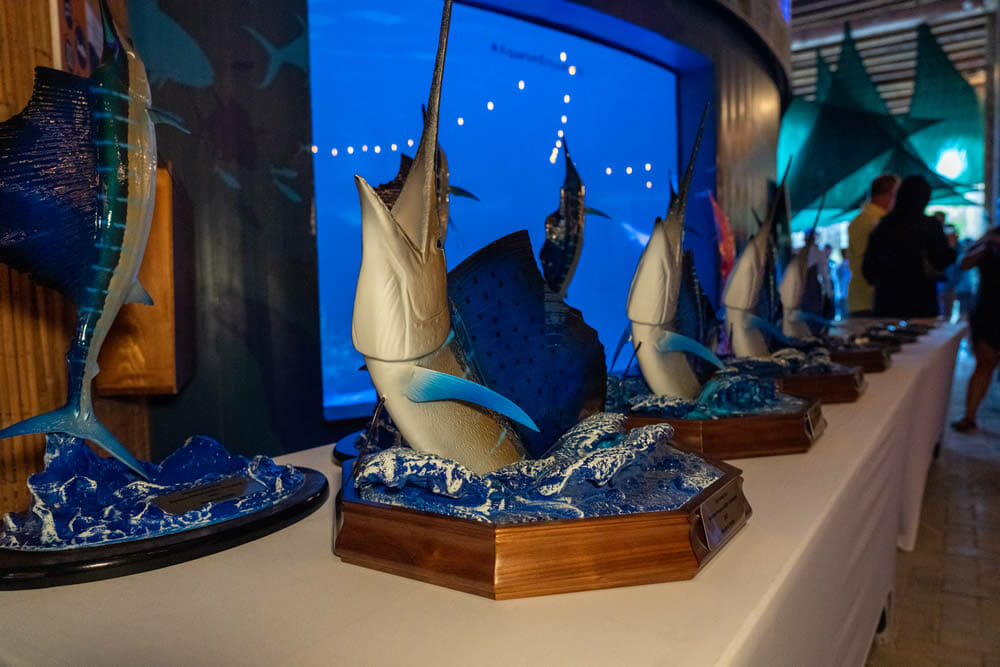