On February 7th and 8th, 2020, Main Attraction hosted their first 2-day Billfish Camp. We had six participants, some local and some traveled as far from North Carolina and Tennessee to join our camp. The forecast for Friday, February 7th was less than appealing, as a large front was making its way through Florida. Captain Marty spoke to all the anglers the night before and asked that they arrive at the dock at 7:30 am Friday so he could review the weather conditions and make the best judgment call. The morning started off raining and blowing, and it was rough but not unfishable. With all six troopers willing to try out the conditions, Captain Marty, Captain Shelby, and First Mate Digger prepared to kite fish and teach Ricky Vincent, Amanda Riley, Eric Anderson, Bruce Jacobs, Rob Moor, and Terry Bitting how to catch sailfish.

First, they taught their billfish students how to catch bait. Then, they showed them how to fly kites using the kite reels, how to bait the hooks, and finally how to work the kite rod lines to keep the baits in the water.

Just after 9 am a large sailfish hit a kite bait and hooked up! Bruce who was wearing yellow raingear grabbed the rod and began to wind as quickly as possible to come tight on the fish. The sailfish was very acrobatic, jumping and tail-walking which added to the adrenaline rush. Bruce kept winding to keep the line tight as he shifted his weight back and forth to maintain his balance despite the large waves. By 9:45 am the beautiful 60+ inch sailfish was caught and successfully released! Throughout this process, our anglers were explained how to fight the fish using techniques that help conserve their energy for the fight ahead. Once the fish was caught, they were shown how to release it most carefully to ease its recovery and survival after such a strenuous battle. 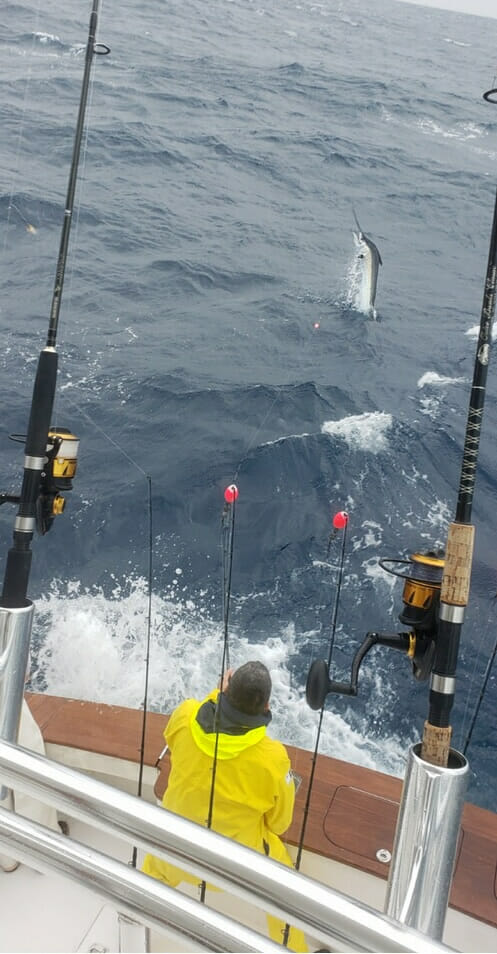 Next, a Kingfish was hooked and also caught. When trying to raise Sailfish, it is not unusual for a variety of other species such as Blackfin Tuna, Mahi, and Mackerel to eat a kite bait. Shortly after, one angler expressed they wanted to head back in due to seasickness. The Captain consulted the other clients to see if they were alright with losing some fishing time and everyone agreed it would be best. Fortunately, they weren’t too far offshore so after a quick drop-off the team was headed back out. Due to the cloud induced lack of visibility, kite fishing was going to be the technique for the rest of the day as sight fishing would have been very difficult.

After setting the kites again while reinforcing the techniques we utilize for kite fishing, another single sailfish ate a kite bait and was hooked up. Rob Moor battled this sailfish and again it was successfully caught and released.

Around 2:45 pm with a full kite spread setup, seemingly out of nowhere a pack of 3 sailfish swam into the spread and aggressively ate 3 kite baits. Just like that in what felt like an instant, the team was hooked up to a triple! A sailfish triple-header is VERY exciting. Not only does the Captain have to maneuver the boat expertly to keep all 3 fish in play, but the anglers also have to coordinate their positioning while they wind as fast as possible to keep the line tight. Lines will often cross over each other and the anglers need to switch sides to uncross the lines so they do not cut each other off.

With the Captain and crew giving instructions, 3 sailfish speeding off in different directions, 3 anglers winding furiously and the boat being maneuvered to stay with the fish it’s very hectic and lots of fun. All three sailfish were successfully caught by Eric, Terry and, Ricky. Needless to say, our anglers were over the moon, each being able to catch a sailfish on Day 1 of our Billfish Camp despite the harsh weather conditions.

We ended day 1 with a wonderful dinner at Brutus Seafood and Market. The students and crew enjoyed family-style appetizers consisting of conch fritters, calamari, BBQ sliders, tuna tataki, and an assortment of shrimp and conch salad. Our students in training were quite impressed with the spread already, which is why they were surprised when they were also handed a menu of entrees to choose from for their main course! Special thanks to Elise Mucha owner of Brutus Seafood and her team for providing our valued clients with such a delicious dinner as well the boat lunches, over the two-day camp. 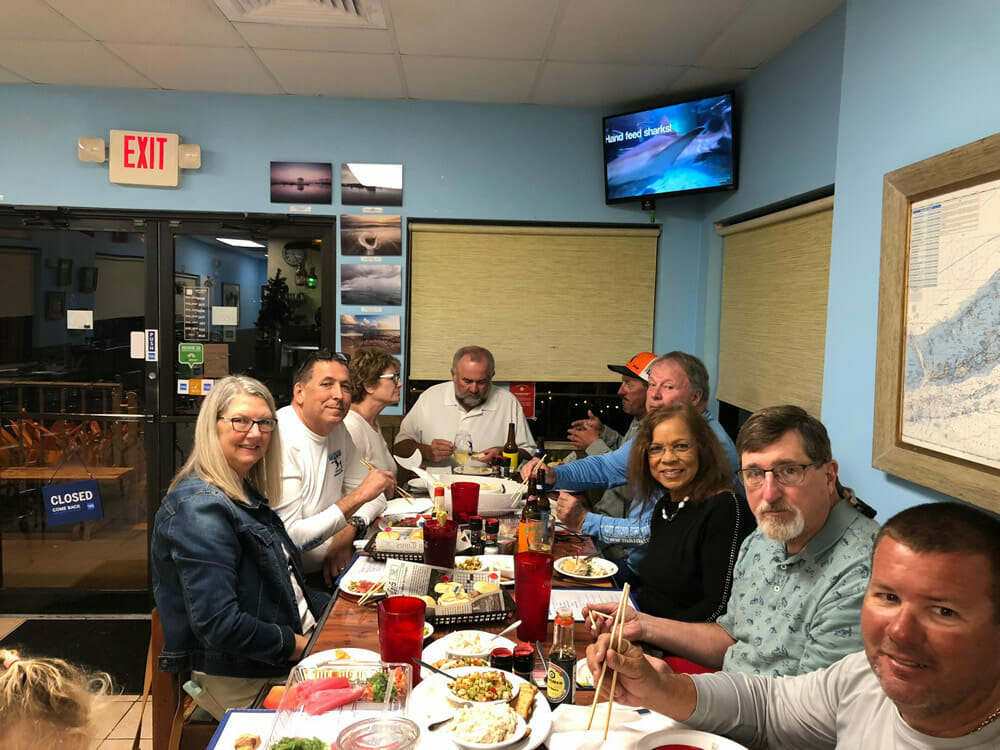 Day 2 we were still experiencing high winds and rough seas. The team set up and kite fished for Sailfish for about an hour that morning without any bites, and then made a collective decision to try for Swordfish. Captain Marty explained the conditions were not ideal to swordfish, typically we want calm weather, but with a limited schedule, as long as the group was willing, he would give it his best shot.

The crew headed 30+ miles offshore to show the students how to set up Swordfish drifts and work the large electric reels. The weather worked against them and after multiple drifts and hours of trying, the crew was able to teach their clients all about the techniques that are utilized for swordfishing. Battling the elements and being persistent is a huge part of what it means to be a successful fisherman and I think our students learned that lesson on day two! Unfortunately, no swordfish were caught, but our clients learned a lot and were able to practice first-hand what they had learned which was ultimately what our goal was for the camp.

Despite the weather conditions, the camp was a lot of fun and the clients learned a lot. Our students got to see first-hand that weather is something we cannot control and it’s not always sunny and calm out. Lots of questions were asked and answered throughout the course as instructions and lessons were provided which was exactly what we wanted. Our Fishing Camp participant’s feedback was very positive which made us feel like the camp was a success and for this reason, we plan to do it again in the future. Our goal is to host several instructional fish camps throughout the year, to appeal to the fishermen and fisherwomen that want to learn and get more involved.

The fish species targeted in future camps will likely change depending on the season. Stay tuned for the next camp and we hope we have lots of participants. Feel free to reach out to get on a waiting list and you will be notified for the next scheduled Fish Camp. 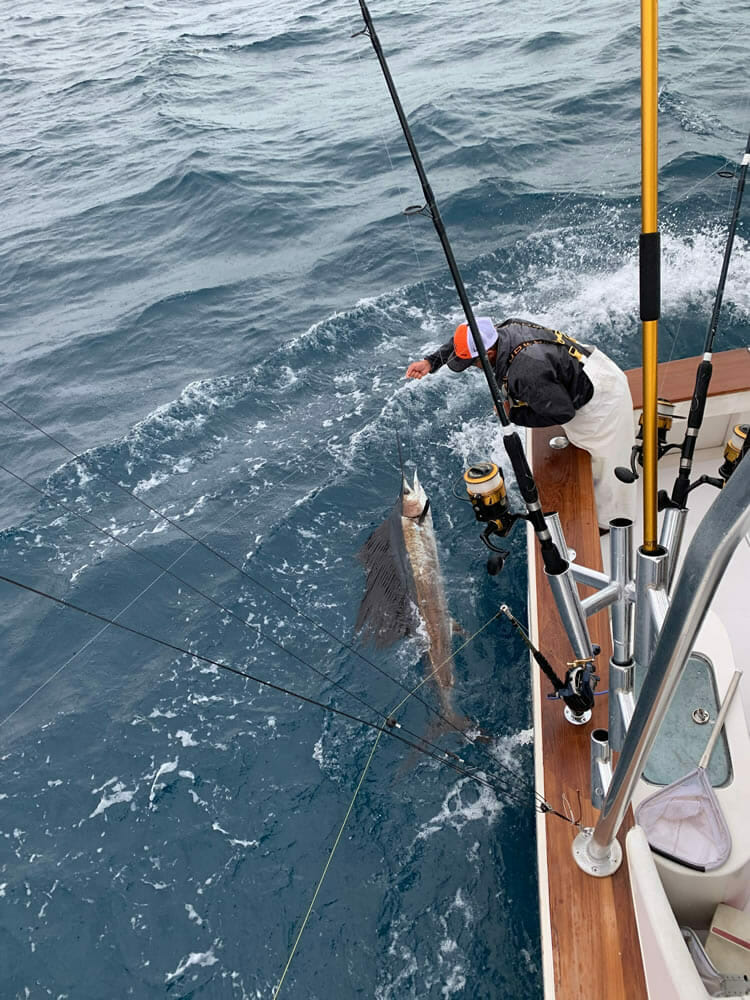 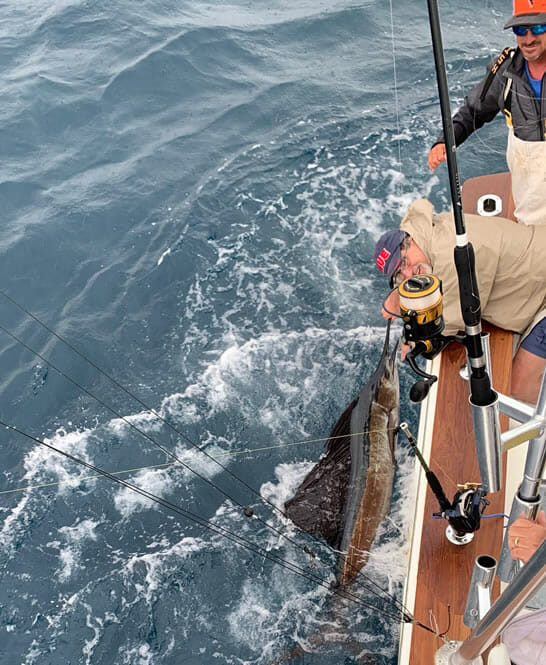 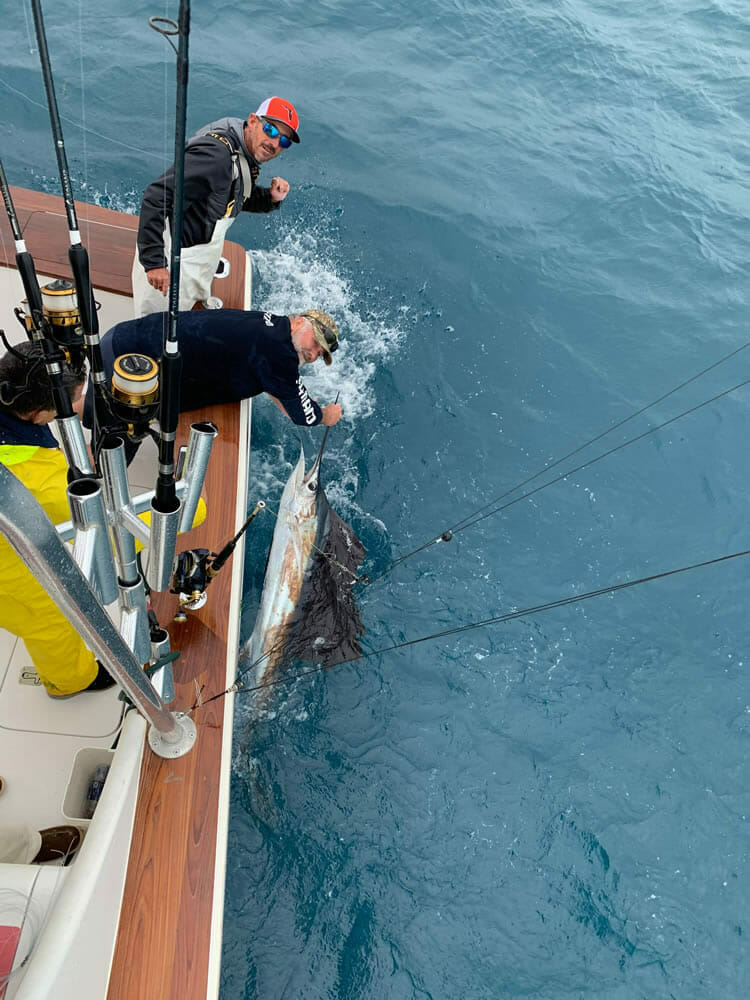 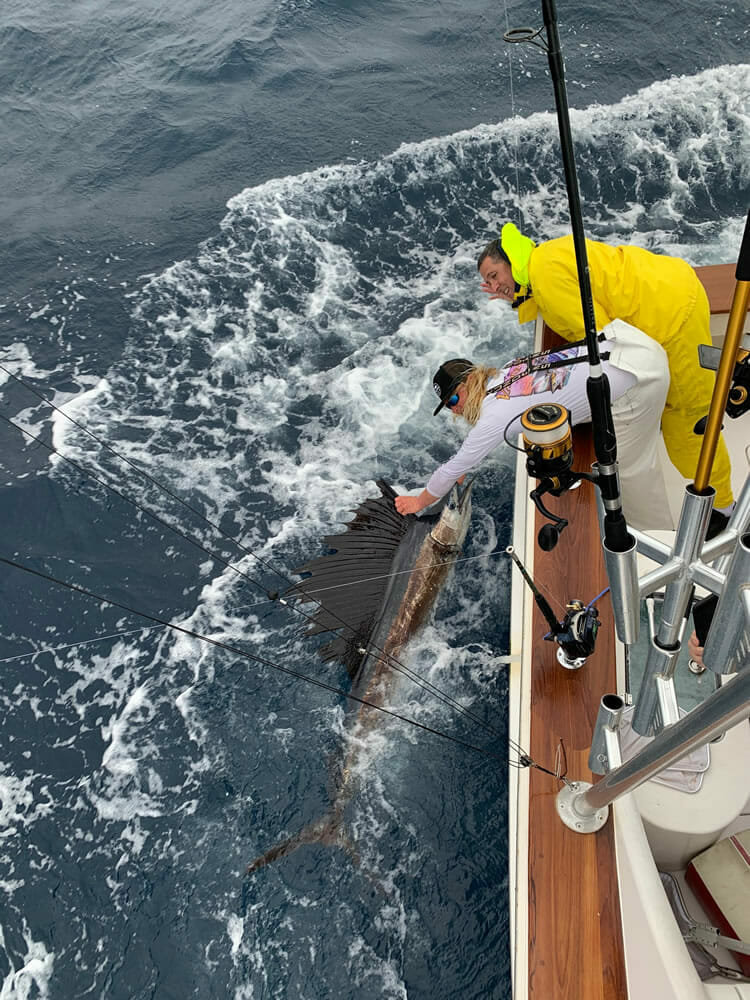 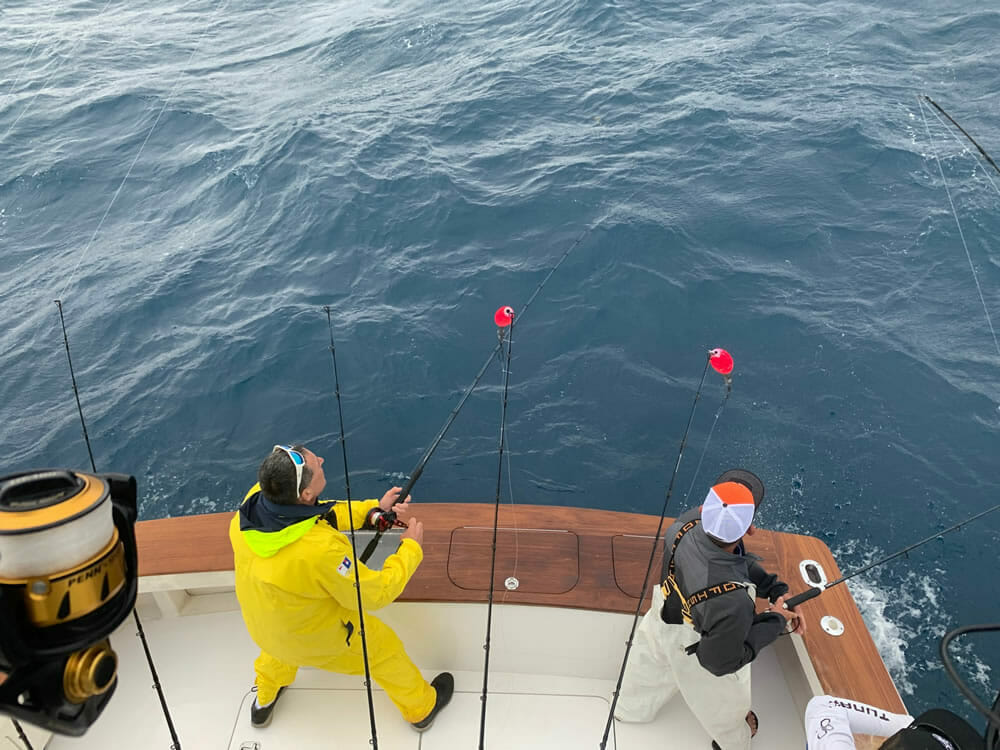 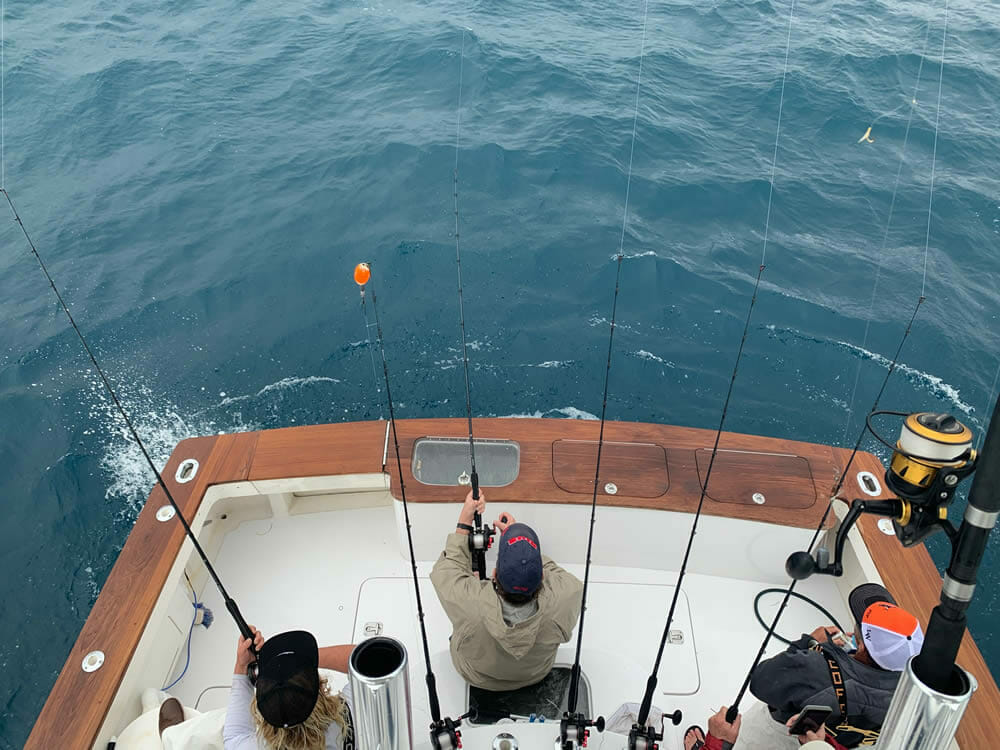 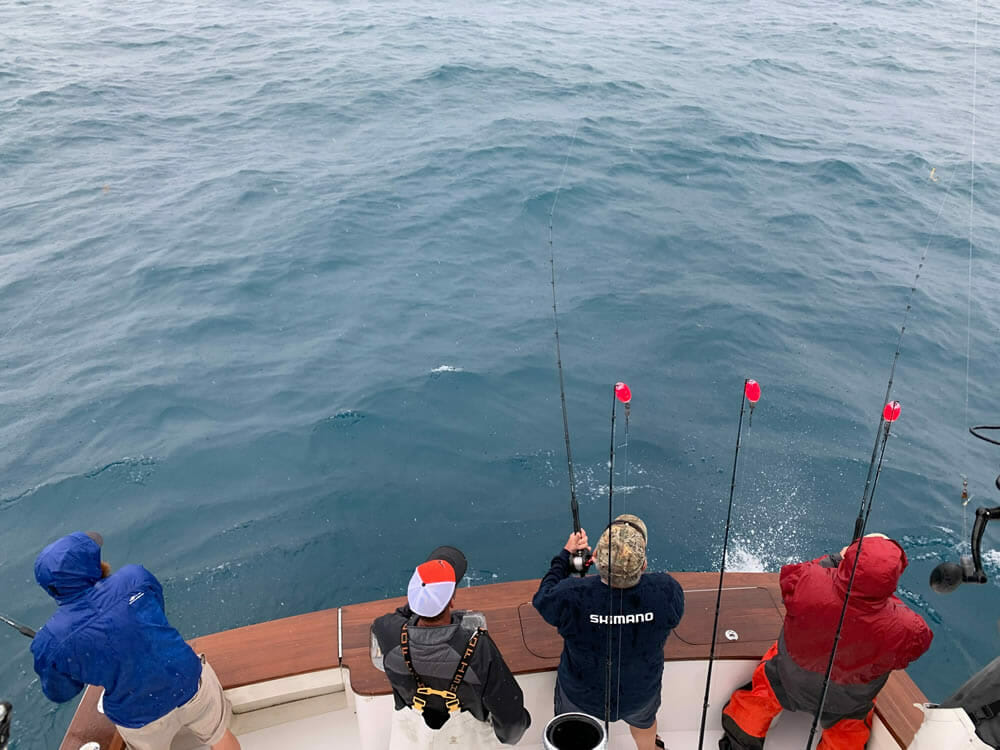