The Engineering Contractors Association or ECA holds their annual Dolphin & Wahoo tournament out of Hawk’s Cay each year. Last year it was suspended, due to COVID, so we were excited it returned in 2021.

Main Attraction has been fishing this tournament for years, for a wide variety of companies over the years. This year The Paving Lady, a paving and road work contractor based out of West Palm Beach, hired Main One to fish the one-day tournament on May 15th.

Fishing had been tough the previous week, the Mahi were scarce and what fish we could find were either keeper schoolies or smaller. This can be an issue when you are fishing tournaments that often have a 10-pound minimum weight for a weigh-in.

On a regular fishing charter if you are catching keepers you stay to catch as many as you can. In tournament fishing, if the keepers are all under 10lbs you move on looking for bigger fish. When we fish tournaments, we have special rates, as this way of fishing can burn a lot of fuel as you search for the prize-winning fish. Tournament proposals are put together before the actual fishing day, so the client is completely aware and our terms are very transparent. 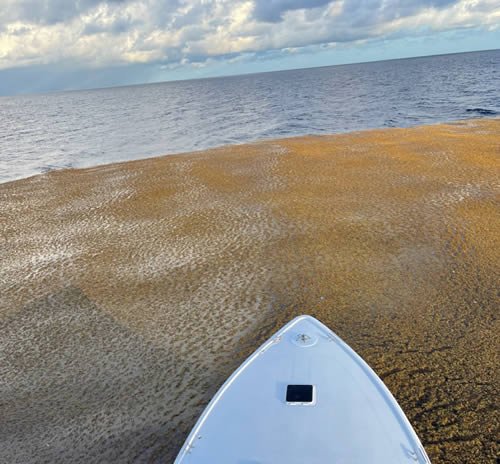 Patches of floating grass and weeds are home to many small fish which attracts hungry Mahi.

The tournament team consisted of Mauro, Tony, Dawn, and Tony as anglers and first mate Lance and Alex in the pit. Captain Marty touched base with the anglers the night before and requested they be at the dock at 6:15am.

Lines in was at 7 am and Captain Marty wanted to catch a few fresh live baits on the way out to ensure he had extra. He had plenty of bait already on the boat, but again you can never have enough bait in our opinion!

At 8:02 am Captain Marty texted his wife Katie that they were hooked up to a 25-pound bull and fighting it. What a great way to start the day!

It was a quick fight, but that fish was very important to the team, and with that fish, it would put the Main One team on the board! Another text came in, approximately 8 minutes later saying “got em”. What a sigh of relief, the big bull was in the boat and going in the fish box. Mauro was the angler and handled the fish like a pro. 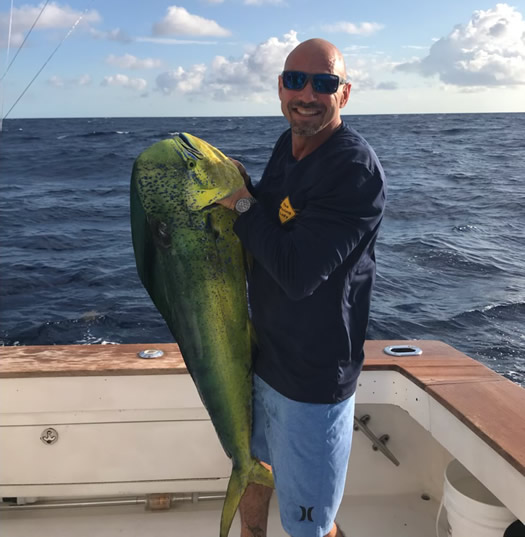 Mauro and his slammer Mahi.

Main One burned a lot of fuel as Captain Marty and crew scoured the ocean for more large Dolphin fish, picking through all the patches and checking out what the frigate birds were seeing.

Our lady angler, Dawn Miller, caught another dolphin approximately 10 pounds that we thought might make it at weigh-in as well. The team went as far as approximately 30 miles offshore and worked down to the west, as far as Big Pine Key looking for another award-winning dolphin.

Schoolies were everywhere, so they had to look closely and pick out any larger fish from the groups.

There were no specific lines out time, however, the weigh-in was being held at Hawk’s Cay resort from 3-4 pm. As the day went on, the wind picked up, making conditions “sporty”.

Captain Marty knew he had a long run back and with the waves kicking up, he had to allow enough time to make it to weigh-in on time. The Main One rounded the Hawk’s Cay channel at 3:44 pm and was spotted by the committee boat.

For this tournament, if you are in visual range before 4 pm it is legal to weigh in. Unfortunately for us, another vessel had just weighed in a 38-pound dolphin right before we did.

Our big bull weighed in at a still respectable 25.2 and Dawn’s fish weighed exactly 10 pounds. We caught the second-largest dolphin on the day, got 3rd place overall for total weight and Dawn got the Lady Angler award. 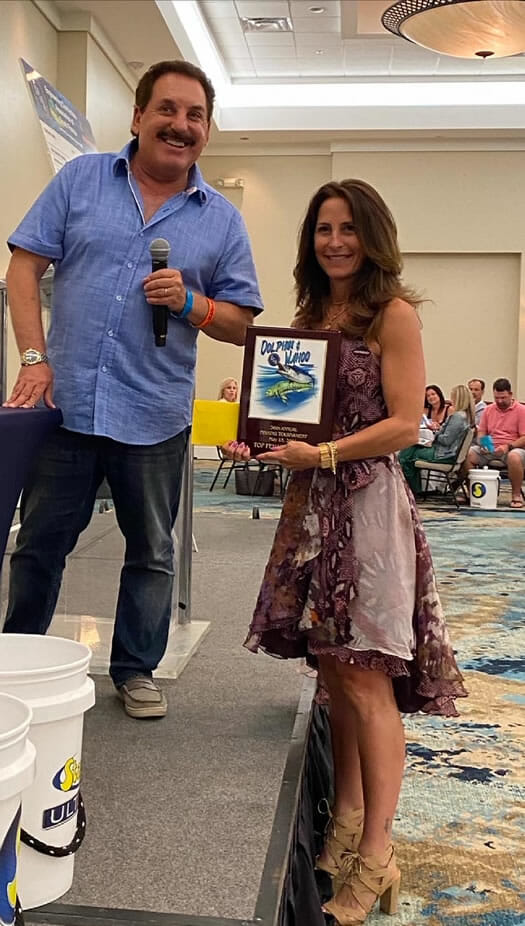 The team worked very hard, looking for big fish. Not only did they receive several awards, but they also caught enough meat for all their office to share. Although the conditions were tough, the team worked together and had a great time.

Our clients have already rebooked with Main Attraction for 2022 and we can’t wait to compete again!

If you are looking to book a Florida Keys fishing charter or tournament call us at 305-289-0071 or visit our contact page. 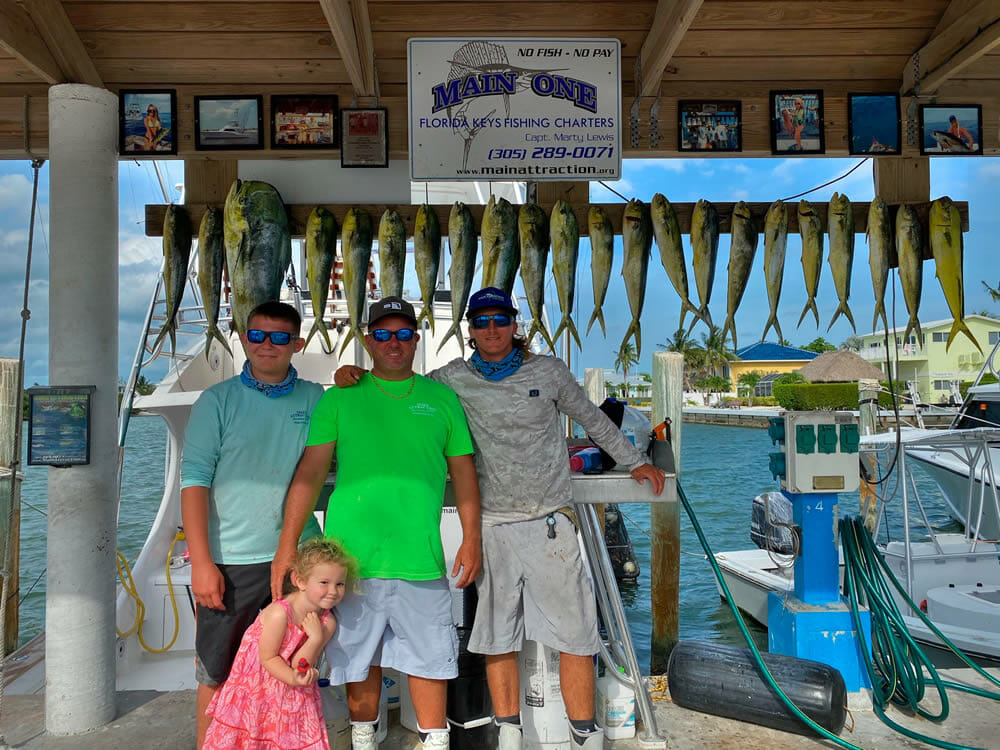 Captain Marty Lewis, Mate Lance, and his children Alex and Natalie pose in front of the day’s catch.