All About Sailfish – Facts About Atlantic Sailfish

Winter is nearly here, and besides the holidays, there is another gift we have to look forward to down here in the Florida Keys; The Atlantic Sailfish! The Sailfish is undoubtedly the quintessential sportfish of the Florida Keys. Not many species of fish can get an angler’s heart racing like having a Sailfish on the line. No matter how many Sailfish our Captains and Crews catch and release Sailfish, it never gets old; it is always exciting and fun.

But how much do we really know about the Atlantic Sailfish?

The Atlantic Sailfish is often visually lighter in tone with hues of silver, gray, light purples, and bright blues. The pacific Sailfish is usually considerably darker, with dark blue, deep purple, and brown tones. If they are genetically similar, the contrast between the two is presumably due to environmental, dietary, and behavioral circumstances. Like the Dolphinfish, Sailfish can change their coloration at a moment’s notice, which experts believe is confusing prey, showing emotion, and communicating with peers. 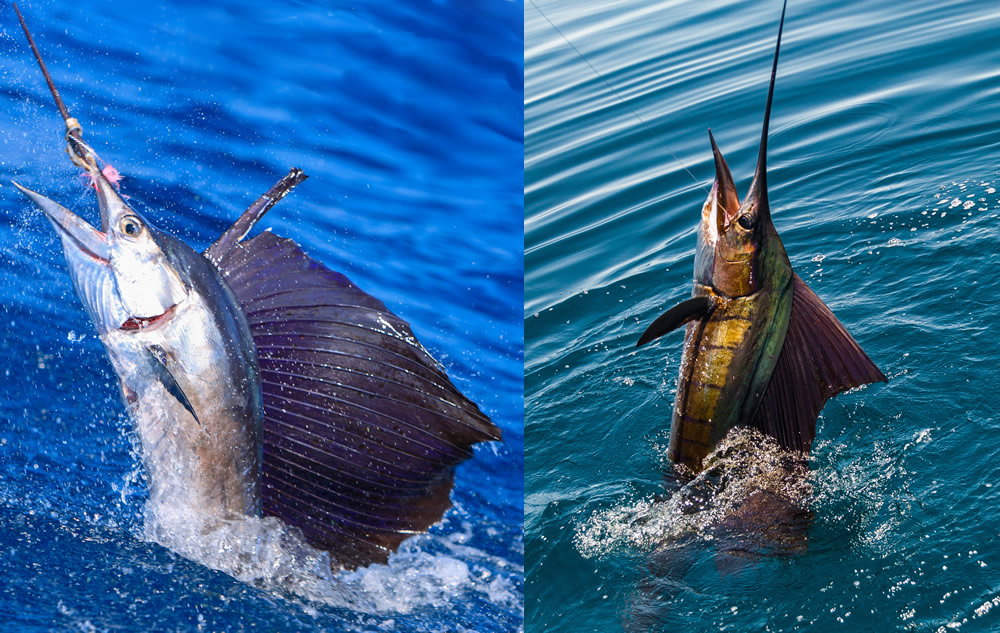 The Atlantic Sailfish (left) is typically much lighter in tone compared to the Indo-Pacific Sailfish (right).

For this article, we will focus on the Atlantic Sailfish as this is the type we catch here in the Florida Keys, but many of the facts we share today will also apply to the Pacific sailfish being of the same species. The Sailfish season in the Florida Keys begins in early winter and lasts through the Spring. However, our approach to catching them changes significantly throughout the season as patterns in both weather and Sailfish behavior shift.

Sailfish breed year-round in tropical waters, but more occurs in the Atlantic during warmer months. The female Sailfish releases millions of eggs into the water column while the male releases its sperm, hoping to fertilize the eggs. Once a Sailfish is hatched, it will start swimming with other juveniles in dense schools feeding on plankton. They grow as quickly as 4-5 feet long in just one year. Sailfish can reach lengths of up to 10 feet long. The IGFA world record for the Atlantic Sailfish is 141lbs, and for the Pacific Sailfish, 221lbs. The maximum lifespan of Sailfish is 13-15 years, but they have an average age of 4-5 years.

Sailfish use their long bills to hit schooling fish by tapping or slashing at the school. They will eat any fish they stun or slow down from the school. While their bills are not sharp, they are rough and feel much like a file or rasp tool. This texture helps the bill knock scales and flesh of the Sailfish’s prey. Sailfish have smooth mouths and no teeth so they eat fish that arer small enough to swallow. When Sailfish hunt in groups, their chances of success increase as the school of bait becomes weaker and slower the more they slash at it. When a sailfish is on the attack, it will raise its large dorsal fin array or “sail”. Marine Biologists believe that Sailfish use their sails as a cooling or heating system. 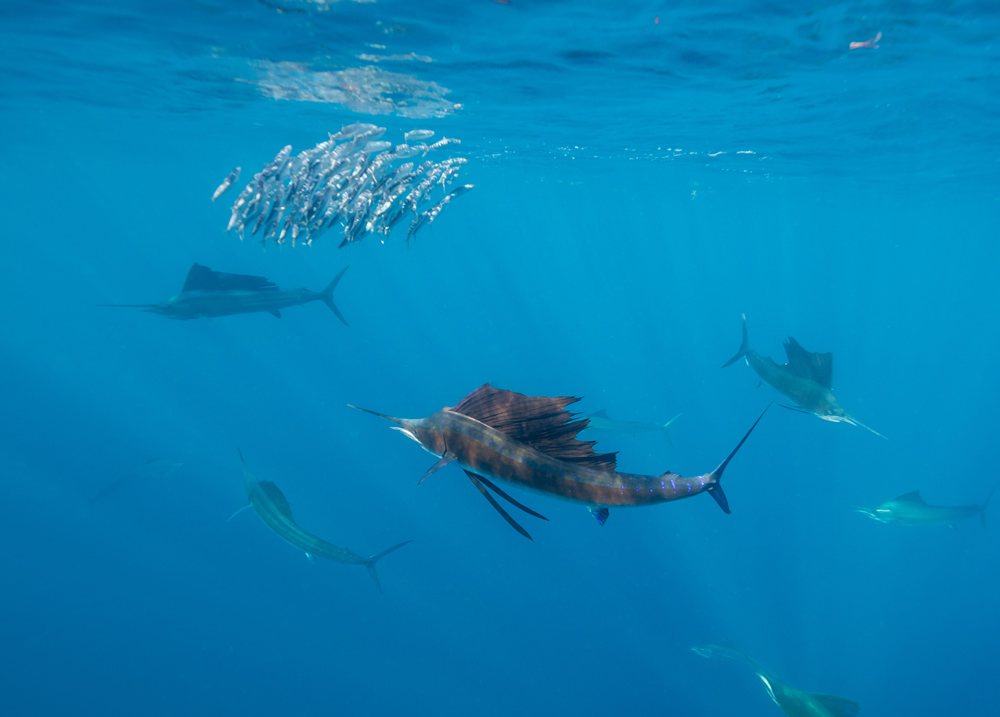 When Sailfish attack a school of baitfish they create what we call a “bait ball” as seen in this image.

Our customers love fighting Sailfish because of the exciting show they put on once hooked. When a sailfish feels the tension of that fishing line, it immediately goes into defensive mode. Their attempts to dislodge the hook from their mouths create quite the spectacular show of acrobatic jumps, flips, and tail-walking displays. 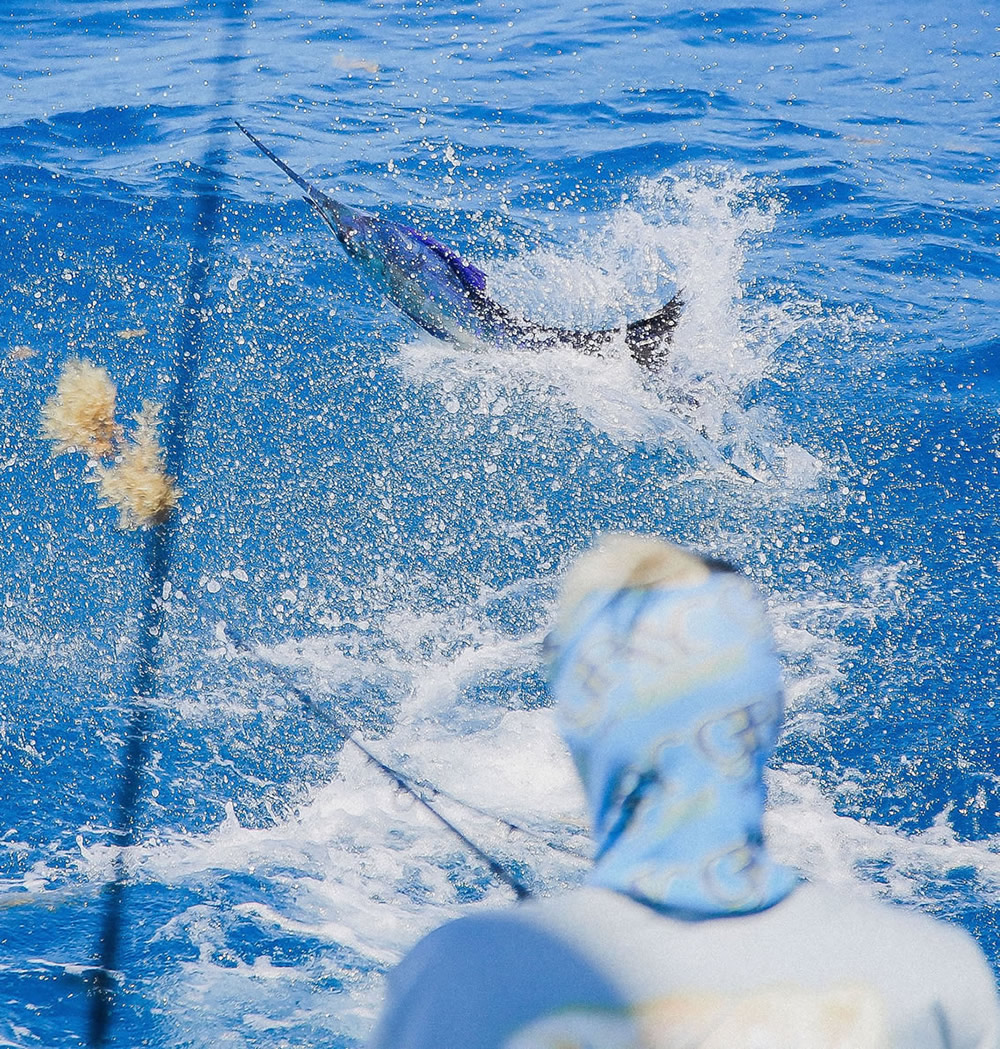 A Sailfish putting on a show just a few feet behind the Main Attraction.

Our Captains and Crews also spot Sailfish free-jumping when they aren’t hooked, usually off in the distance. If the conditions are right, sometimes our Captains will run to that location to see if they can spot the fish. Some Captains say that Sailfish free-jump to remove parasites; effectively taking a shower in the ocean! Some experts say this free Jumping behavior is done to get schools of bait to panic and ball up, increasing the odds of success when they take a wack at the school. Whatever the reason, seeing a Sailfish off in the distance free-jumping is a beautiful sight to behold.

The Need for Speed

Sailfish primarily eat anchovies, mackerel, sardines, and herring. Every Fall through winter their are abundnant amounts of Pilchards inshore. Pilchards are a type of herring that Sailfish love to eat. When the Pilchards are in close so are the Sailfish which is why we can catch them so close to land in the winter. As opportunistic feeders, Sailfish also eat crustaceans, mollusks, and other bottom dwellers they may find along the way. Sailfish are near the top of the food chain and are only killed by whales, sharks, or humans. Sailfish must hunt for food constantly to support their high activity levels and fast metabolism which is also a plus when you want to catch one.

Sailfish tend to stay in the sunlit portions of the ocean known as the pelagic zone and prefer water in the 77-82 degree range. Despite this, we find Sailfish in various water temperatures and every depth you can imagine. We catch them in the reef’s shallows, a few hundred feet down on sunken wrecks, even free jumping in waters over a thousand feet deep. This is because Sailfish live a life on the move, constantly looking for food any time of day or night.

When Finding Sailfish, it helps to know where their food is; recognizing the behavioral patterns and locations of baitfish is very useful. One of our Favorite ways of catching Sailfish is in the winter using fishing kites on the reef. When the bait is close to the island, so are the Sailfish. That means in the wintertime, when conditions allow it, we get to catch Yellowtail Snapper, Mackerel, and Sailfish at the same time!

We also find Sailfish just off the reef’s edge surfing in the waves in the spring. This behavior makes it easier for the Sailfish to migrate East when the current is pushing against them from the west. We refer to this as “tailing conditions” because our Captains can see the Sailfish’s tails sticking out of the waves from their towers. 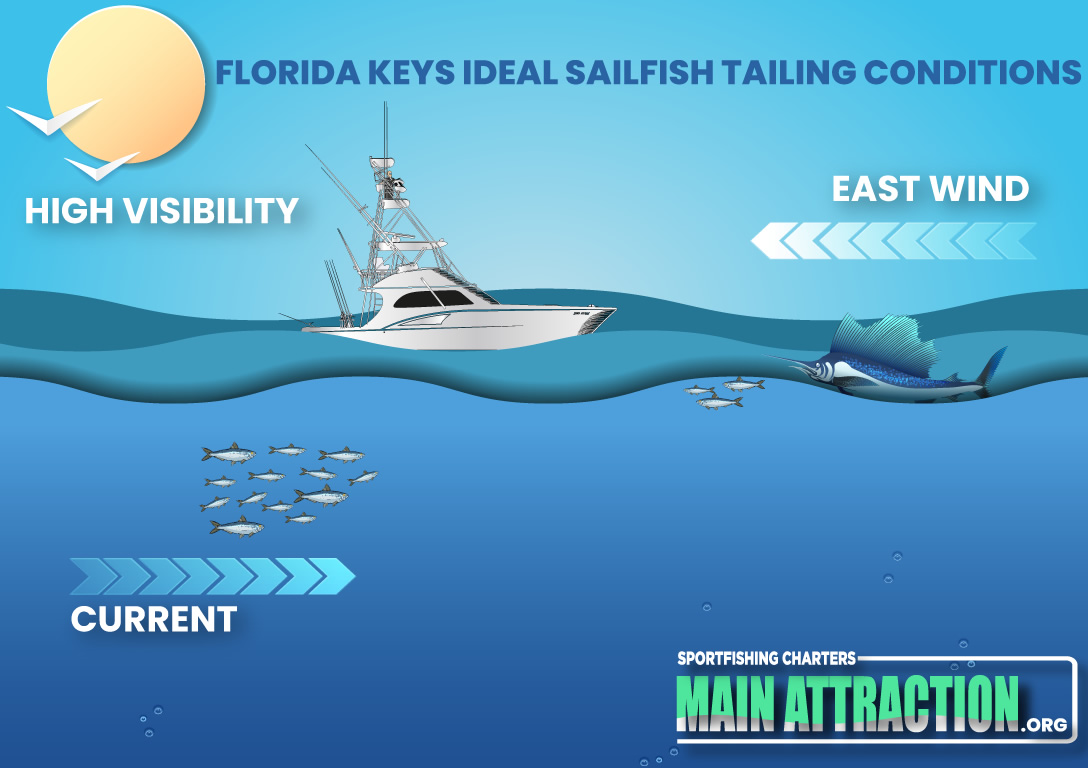 November is just a week away, and as expected, the bait is already here, and so are the Mackerel; a great sign because it means that the Sailfish will be here before we know it! Until then, we will keep catching Mutton Snapper, Blackfin Tuna, Yellowtail, Mackerel, and even a few Dolphinfish here and there.

If you are planning to come down to the Florida Keys for the holidays or just want to escape the cold up north, an offshore fishing trip with the Main Attraction is an exciting way to pass the time! Call us at 305-289-0071 or visit our contact page for more information.