What do fishermen do on their time off? Why we fish, of course!

Our crew worked hard this past summer, and we thought everyone could use a couple of weeks off to relax, fish, and spend time with their families before the holiday rush begins. It was a fantastic past two weeks, and for the most part, the weather was sunny and warm.

Once Hurricane Ida passed below the Florida Keys and headed for New Orleans, it left lots of floating debris in the ocean, which is never bad for Mahi fishing. 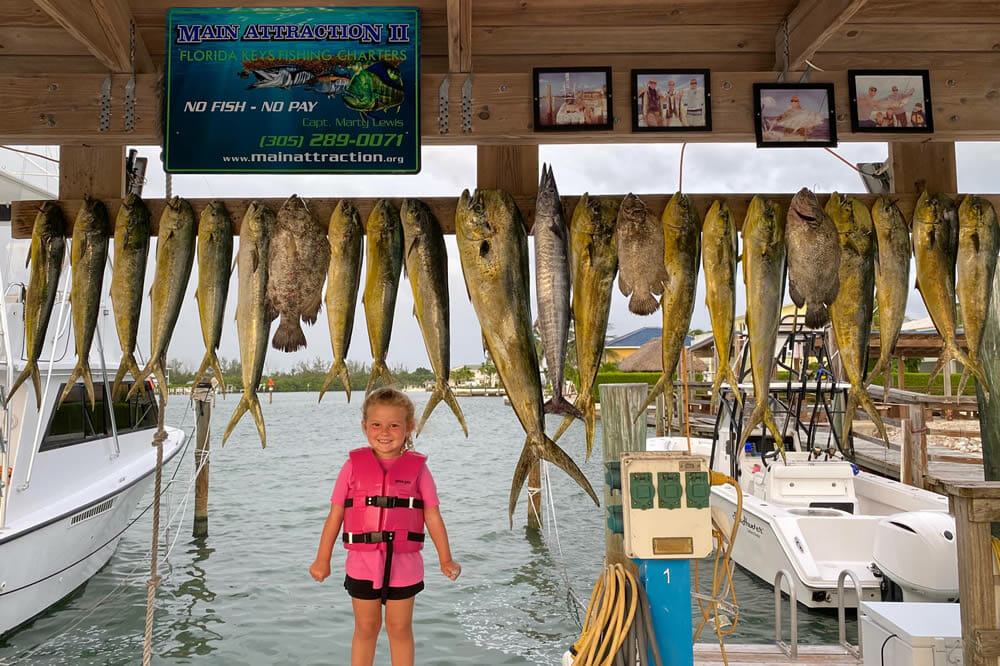 Natalie poses with a rack of fish the Lewis family should be proud of!

Fun Fishing Aboard The Reel Attraction

With some rare time off ahead of them, Captain Marty and Mate Lance decided to take the Reel Attraction out to fun fish for a couple of days. Joining them were Marty’s wife, Katie, and their daughter Natalie.

There was almost an eerie feeling as they headed offshore early in the morning. The seas were dead calm, and there was a haze across the horizon due to a large plume of Saharan dust descended into the tropics. While calm waters can sometimes hinder the Dolphin fish bite, this was offset by Ida leaving many hungry fish and a smattering of floaters across the ocean in its wake. 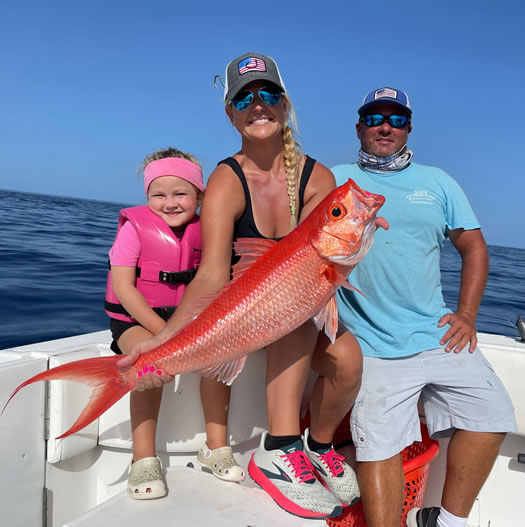 The Lewis Family pose with a beautiful Queen Snapper caught over their holiday break.

As the sun rose and the skies cleared up it turned out to be a gorgeous day. Captain Marty and the crew came across all types of debris during those two days, broken pilings, pallets, Cuban rafts, bamboo, and more.

Floating debris was by far the number one producer of fish for them those two days, catching Mahi of all sizes from schoolies to gaffers and even slammer size Dolphin fish.

They also caught Tripletail, and Wahoo off the floaters. Without any customers to fight the fish Katie and Lance found themselves fighting and boating the fish at the same time which made it hectic and lots of fun!

Since it was so calm, they decided to deep-drop some baits with the electric reel several times.

While they hoped to hook a Swordfish there attempts did not go unrewarded. They caught some delicious Barrelfish, Queen Snapper, and Rose fish. The Lewis Family had a blast fishing, and as a bonus, they brought back a wide variety of tasty fish to enjoy!

Below is a video with some of the highlights of their two days on the water.

Fun Fishing Aboard the Main One

Ever since Captain Marty and Katie bought the Main Attraction’s 49-foot mothership, Main One, it had been his dream to have a fun overnight fishing trip. Initially, Marty wanted to head towards the Bahamas, but a passport delay quashed that option. Marty changed course and decided to make a Pulley Ridge and Dry Tortugas trip instead. With him was his son Alex and crew members Captain Aaron and First Mate Lance. 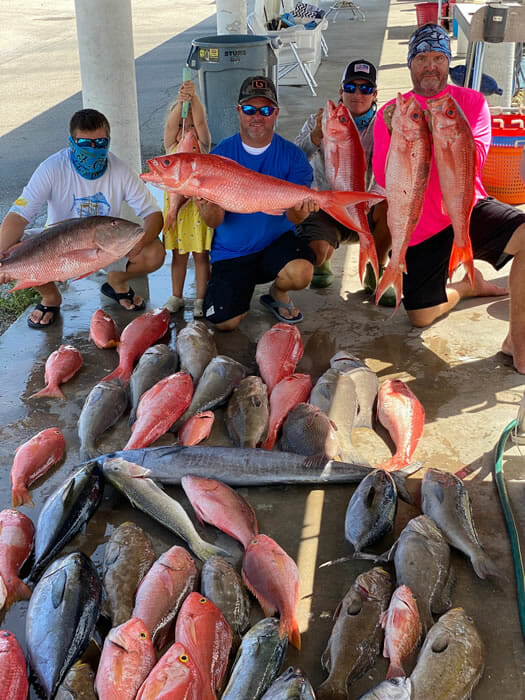 The Main Attraction team poses with their epic catch.

The guys loaded the Main One with food, drinks, bait, every fishing rod imaginable, and a zodiac raft with a small motor. They left mid-day on a Saturday and ran towards Key West. Captain Marty docked at Oceans Edge Resort to refuel and stay the night to get an early start the next day. Sunday morning, they left before sunrise and made their way roughly 130 miles west to Pulley Ridge.

They found some debris on the way and caught Mahi; however, they often catch Dolphin fish, so they released the majority of them, keeping one for dinner that evening. After approximately six hours, the boys arrived at Pulley Ridge.

After some high-speed trolling, they caught a large Wahoo as well. There was constant fishing action.

It takes a lot to get a group of professional fishermen giddy with delight, and the red hot bite was the ticket.

One of the biggest highlights was simply that the crew didn’t have to hand off any fish to customers; they were the anglers that got to engage in the battle. It was an unforgettable day for the crew filled with laughter and memories made. 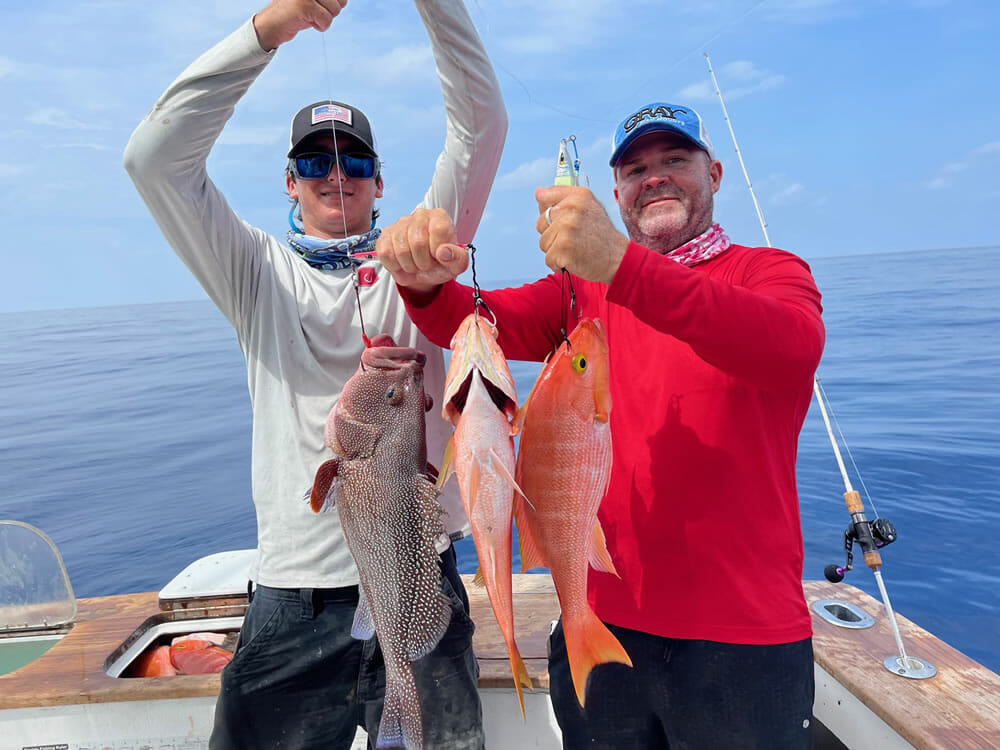 That night the crew members slept at sea as the vessel drifted, with one member always on watch. The following morning they set course for the famous Dry Tortugas, a unique national park comprised of 7 islands.

These islands include protected coral reefs, historic shipwrecks, and the civil war era Fort Jefferson, cannons and all. The guys walked around the fort intrigued and in awe, just like any other group of tourists would.

After a fun morning learning about the fort, cracking some jokes, and taking silly photos, it was time to head back to the mothership! 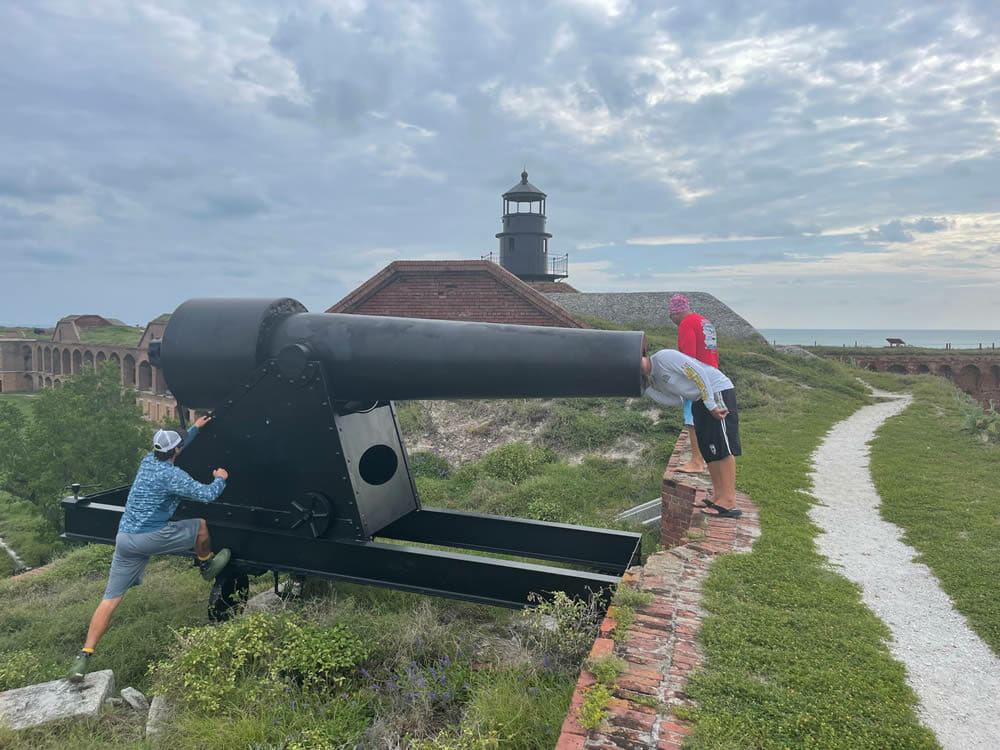 The boys goofing around with a cannon at Fort Jefferson.

After their fort visit, they started their journey towards Key West  but on their way Captain Marty decided to stop at  Marquesas Key and have a look around. Marty saw a clear, shallow area that looked ideal for snorkeling and anchored up.

It was pretty funny to see four grown men jump into a tiny little zodiac, but they were on a mission! They headed to the shallow water and snorkeled, saw some pretty cool fish, and found a big rock with a bunch of lobsters under it.

Under that rock they found the largest lobster any of them had ever seen! Captain Aaron caught the beast and named it Jeffrey. Jeffrey was so impressive that once the guys got back to Marathon, they contacted Aquarium Encounters and asked the owner Ben if he would like Jeffrey in their tank.

Not only did Ben gladly accept he built a beautiful new home especially for Jeffrey! Jeffrey is safe and fed daily and on display for all the Florida Keys visitors. Main Attraction Co-Owner Katie Lewis takes her young daughter Natalie to visit Jeffrey often to make sure he is doing well. 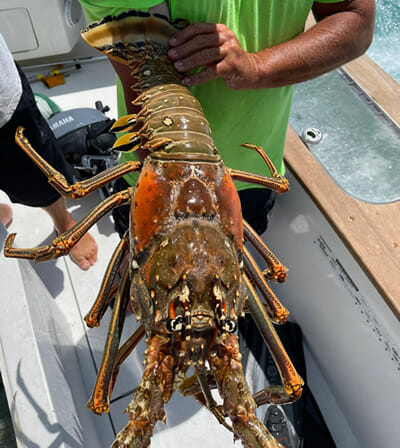 Fun Fishing Aboard the Main Attraction

Captain Dylan Johnson also had some friends in town during the break. They went fishing aboard the Main Attraction for a friend’s bachelor party and birthday celebration. It was a beautiful day, the ocean was calm, but the fishing was thrilling! They had plenty of Mahi fillets to bring home for all six guys.

Captain Dylan also got married about a week later! Dylan took the time he had off to head to Colorado with his beautiful bride, Miss Dixie. Huge congrats to the happy couple! 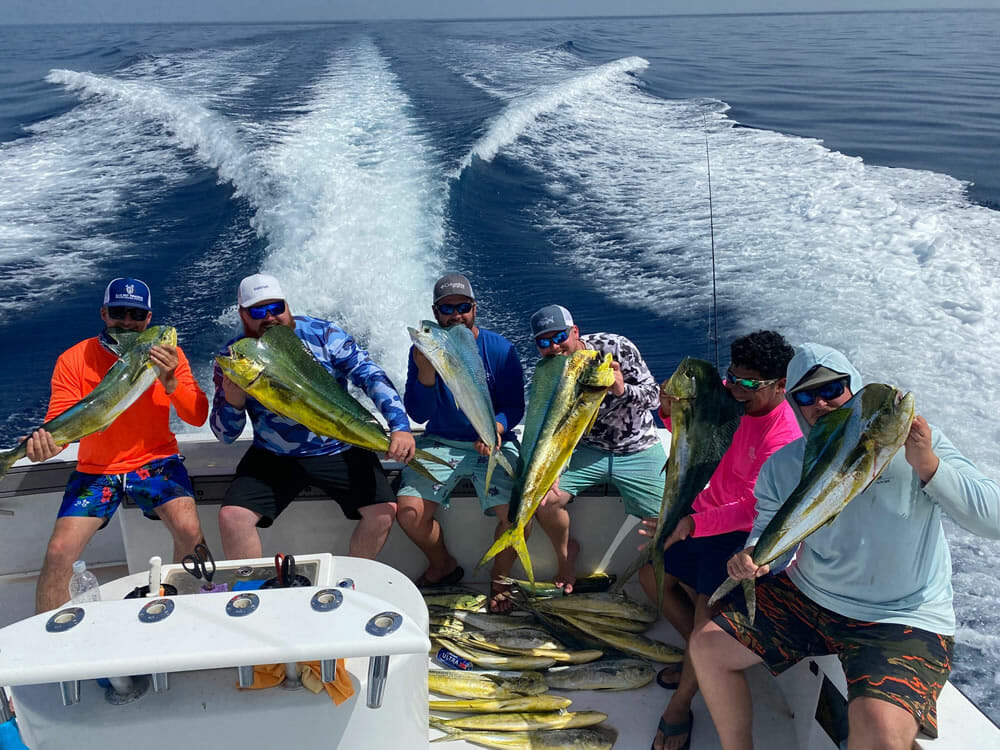 Captain Dylan’s friends and family pose with their awesome catch of Dolphinfish.

The last two weeks went by fast, and it was just what the Main Attraction crew needed after such a busy year.  We are all grateful to spend time with family and friends, which we don’t get enough of during the holidays, which is our busy season.

Now that we have had some fun and recharged our batteries, it is time to get back to work! We have plenty of annual boat maintenance ahead of us in the next few weeks to keep the fleet operational, and as always, we will keep you informed of what is going on. We also have fishing charters scheduled and will continue to share reports, photos, and videos with you all, so stay tuned!

If you have questions or feedback call us at (305)-289-0071 or visit our contact page to book your next fishing adventure in the Florida Keys. 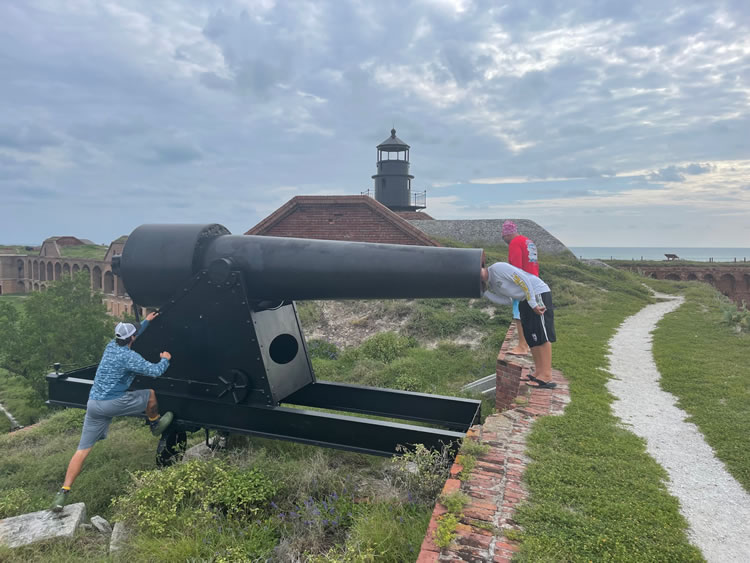 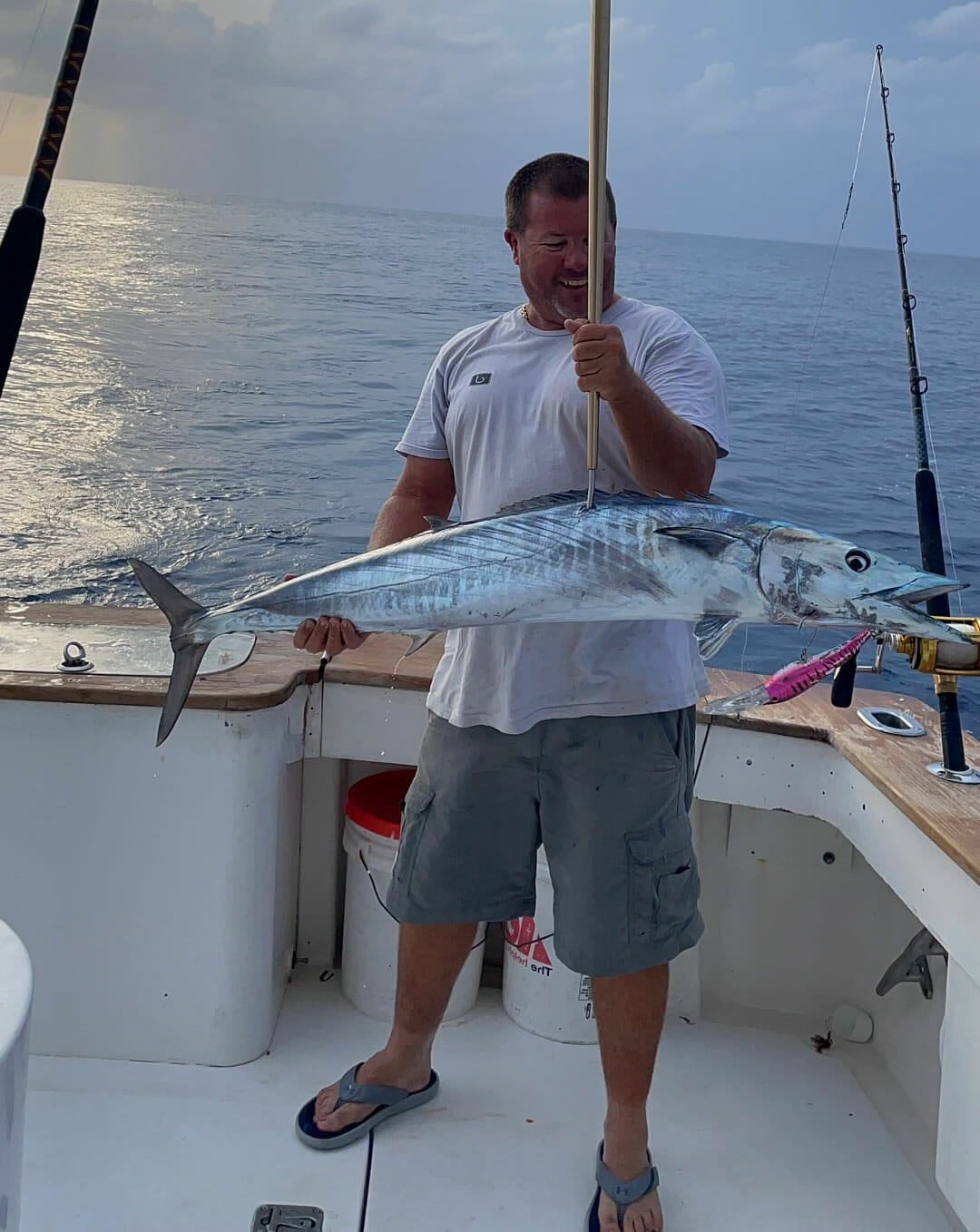 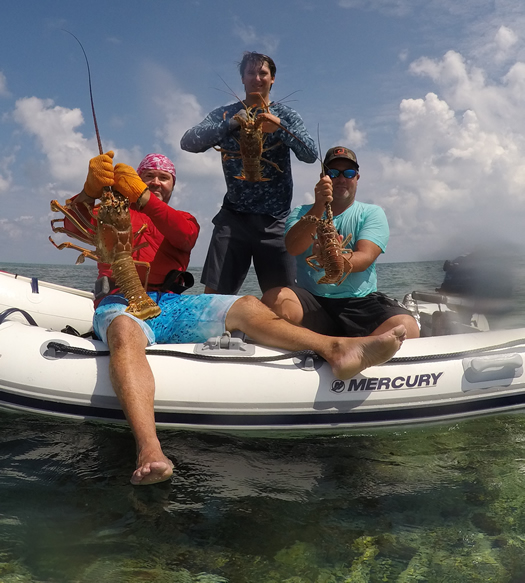 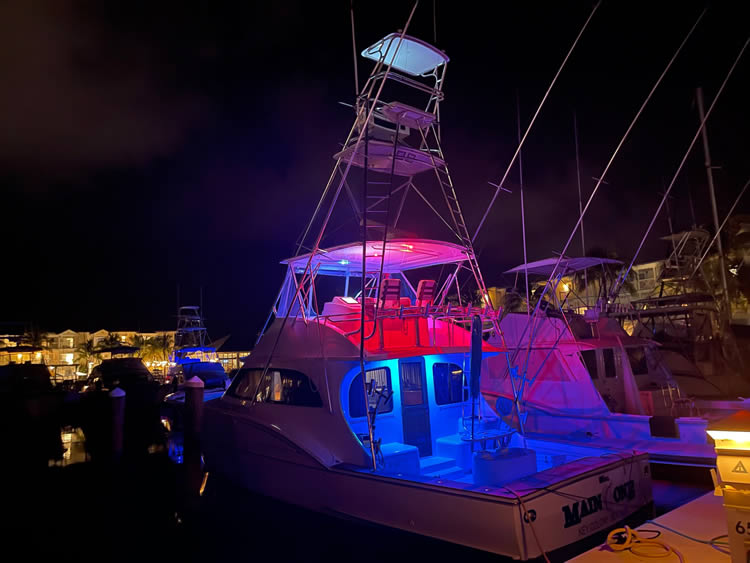 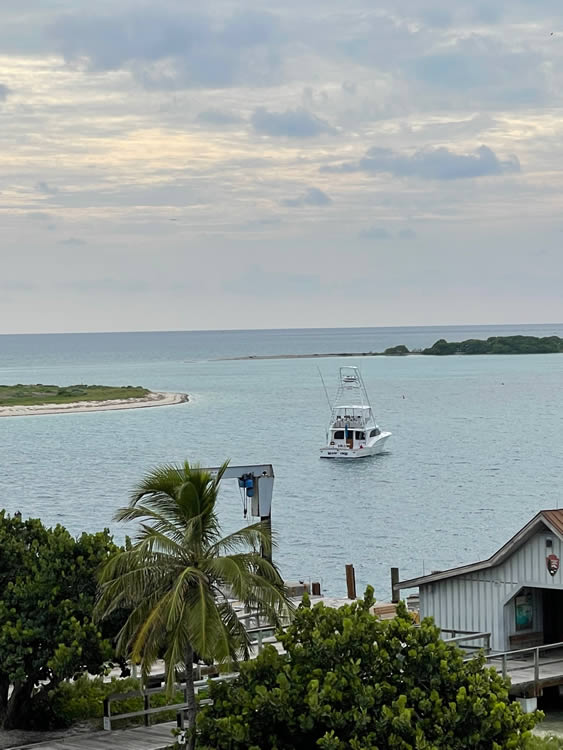 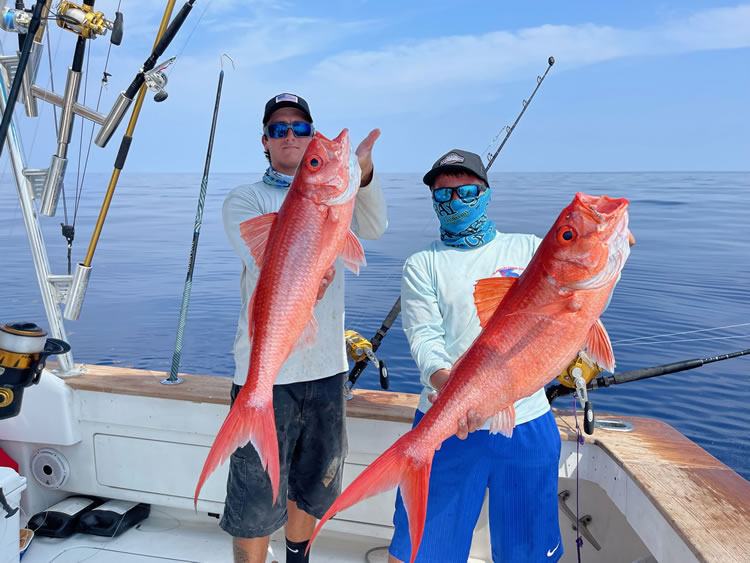 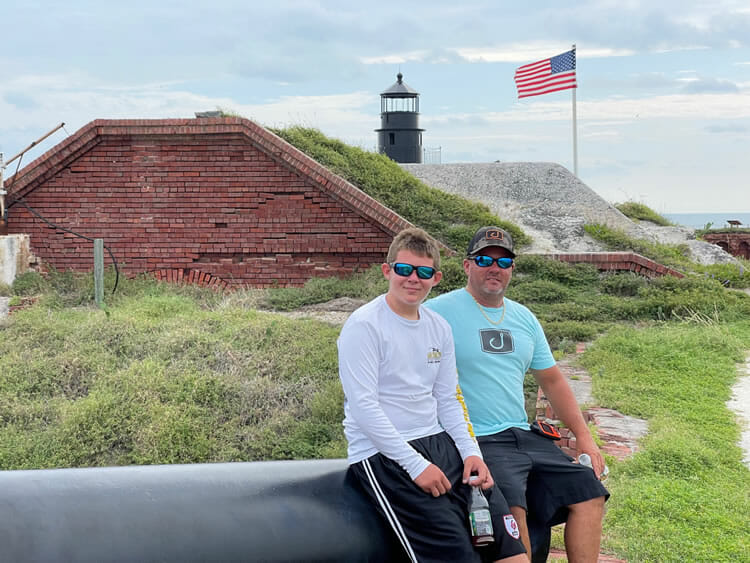