Happy New Year to all our clients and friends! After a hectic Christmas week, Captain Marty wasn’t booked on January 1st, 2023, and decided to take his family and a few friends out fishing. Believe it or not, Captain Marty never gets sick of fishing, so what better way than to start the year catching fish?

The Main Attraction crews headed out early that morning to catch bait at sunrise like they usually do. The group had a productive bait run that morning, and all our boats were loaded with Pilchards. Captain Marty and Katie brought their son and daughter along for the trip. At 8am their good friends Ben, Karly, and their daughter arrived at the Marathon Sailfish Marina. Another friend of the Lewis family, Jeff Bowman, also joined in on the day of fun fishing. Once the group was onboard, Captain Marty navigated the Main one out of the Coco Plum Channel and headed to the first spot to catch Ballyhoo. Captain Marty’s mates for the day would be Ben Zdan and his son Alex Lewis. Once anchored and chumming, Marty, Ben, and Alex got to work as they hair-hooked Ballyhoo using a sabiki rig.

In our previous article, we discussed what a sabiki rig is and why we prefer to catch Ballyhoo with them. The short version is that baits caught on a feathered multi-hook rig last longer than netted baits, especially delicate baits like Ballyhoo.

Katie plucked Ballyhoo from the hooks one by one using a dehooker. She was sure to do so gently so as not to injure the precious baits. Katie knows Balllyhoo don’t keep well in live wells, especially overnight. So she was sure to drop them into a round livewell so their little beaks wouldn’t bang into any corners.

Jeff and Karly each caught a Kingfish during the bait-catching session on the reef, which was a fun start to the day for them. Once they had enough hooked Ballyhoo in the livewell, Ben loaded his cast net and threw on the school of bait fish. He managed to get a good amount of Ballyhoo in that single throw. Ben was sure to put them in a separate round livewell to keep them away from the hooked baits. The Mates planned to use the netted Ballyhoo first as they do not last long once the net knocks off their scales and slime coat.

Once the Main One was loaded with live bait in her wells, the crew pulled anchor and headed offshore. There was a feeling of excitement and anticipation in the air. 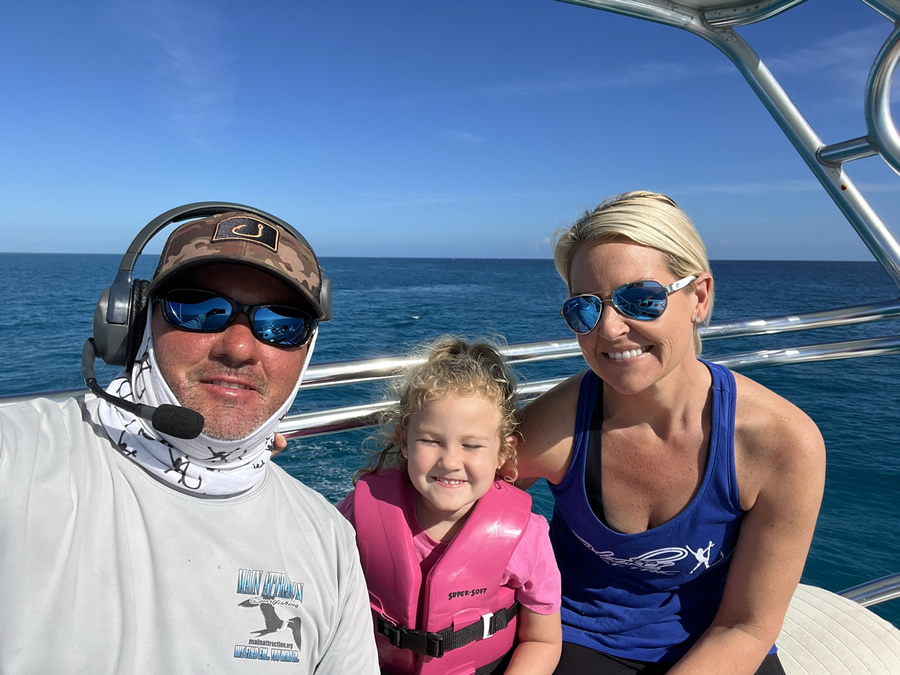 From left to right: Captain Marty, Natalie, and Katie.

The clear sunny skies meant excellent visibility. The beautiful royal blue water instead of murky green meant a real possibility for Sailfish. Captain Marty knew sight fishing was what they would do that day.

Captain Marty drove the 49-foot vessel from high up in his tower, looking for Sailfish near the surface. He thought the water looked great as he scanned for signs of life; specifically, baits showering in terror from a hungry Sailfish on the prowl.

Captain Marty spotted the first Sailfish he had seen in 2023 and called for bait to be pitched. It was a good cast, but the Sailfish turned down the offering. The guys offered every type of bait they had onboard multiple times and were unsuccessful. This is a common occurrence when targeting Sailfish. We recently published an in-depth Sailfish article and video that addresses this scenario. After a few tries, it was clear the Sailfish would not eat a bait, and it was on to the next one.

As the Main One was cruising, the boat came out of gear abruptly, followed by Captain Marty’s excited screams for a live bait! Many of those who have fished with Marty know that terrific high pitch yell he has when he sees a Sailfish; it is pretty entertaining!

Ben and Alex quickly hooked live baits and cast in the direction that Marty was pointing. The fish promptly gulped down the live bait offered, and it was game on! Jeff was winding as quickly as possible on the fish while Marty backed down to make sure that leader would reach the rod to get the catch and release. Since the fish was right behind the transom and Marty was backing up, the fish was caught and released in less than a minute. While it was a quick fight, it still counts as a catch and release, and now Jeff had his first Sailfish under his belt! 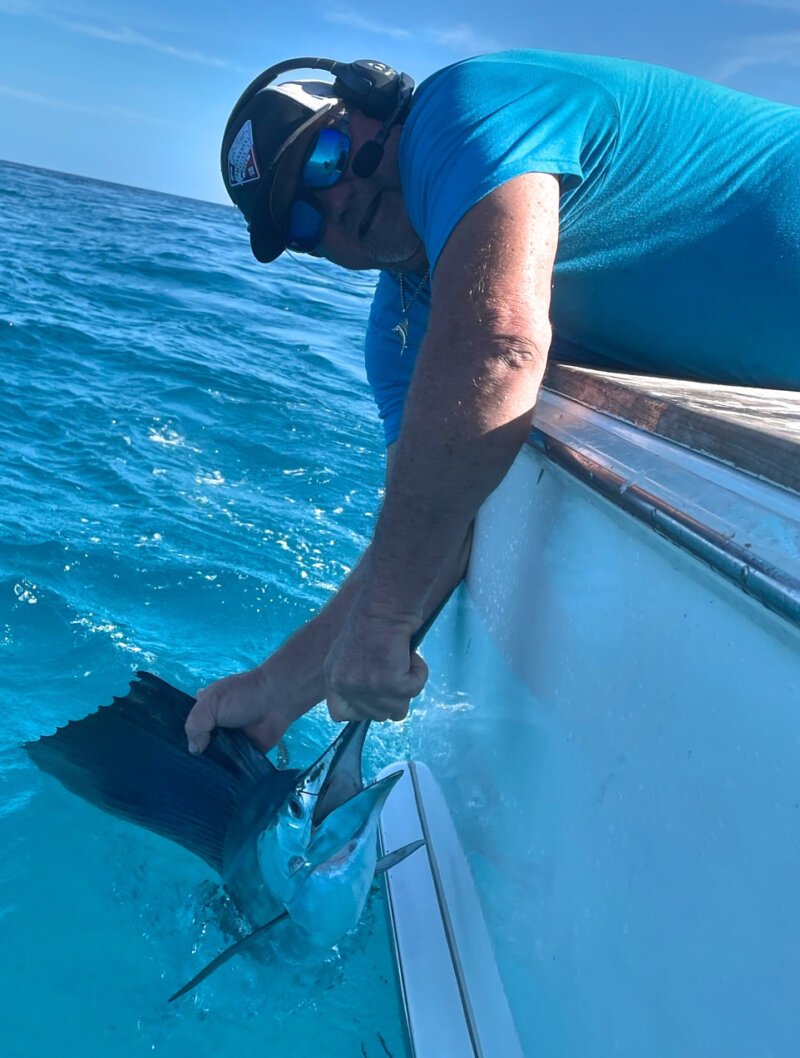 A very happy Jeff Bowman with his Sailfish.

Marty was excited but knew he had another angler onboard who had never caught a Sailfish, Ben’s fiancé, Karly. Karly and Ben have a little girl less than two years old with them, and it was her naptime, so Karly ventured into the cabin to get her to rest. Unsurprisingly, Marty found yet another Sailfish, and Mate Ben came rushing into the cabin to get Karly to come to fight her first Sailfish!

At first, Karly was hesitant, as the little one was starting to fall asleep, but this was the chance of a lifetime! Katie jumped to action; being a mother herself, she knew how to safely take the toddler from Karly’s arms so she could fight the fish. Karly headed out and began to fight her first Sailfish. Katie and the kiddos all watched the action from the Main One cabin. This Sailfish was large, easily over 7 feet long, so it took Karly some time. Marty assisted with boat positioning and backing down as he did for Jeff until they got their hands on the leader recording her first official Sailfish catch. Way to go Karly!

At this point, the pressure was off, but Captain Marty wanted one more for Jeff, since his first fight was so quick. Marty asked Katie to bring their youngest child up in the tower with him. Typically, not a good idea, but it was a perfectly calm day. They made their way up the tower so she could see what Daddy saw daily.

Within the 30 minutes they were in the tower, Marty pointed out bait fish, jellyfish, and several turtles. Marty saw a boat nearby that he knew well and asked if they would come over and take a photo of the three in the tower. 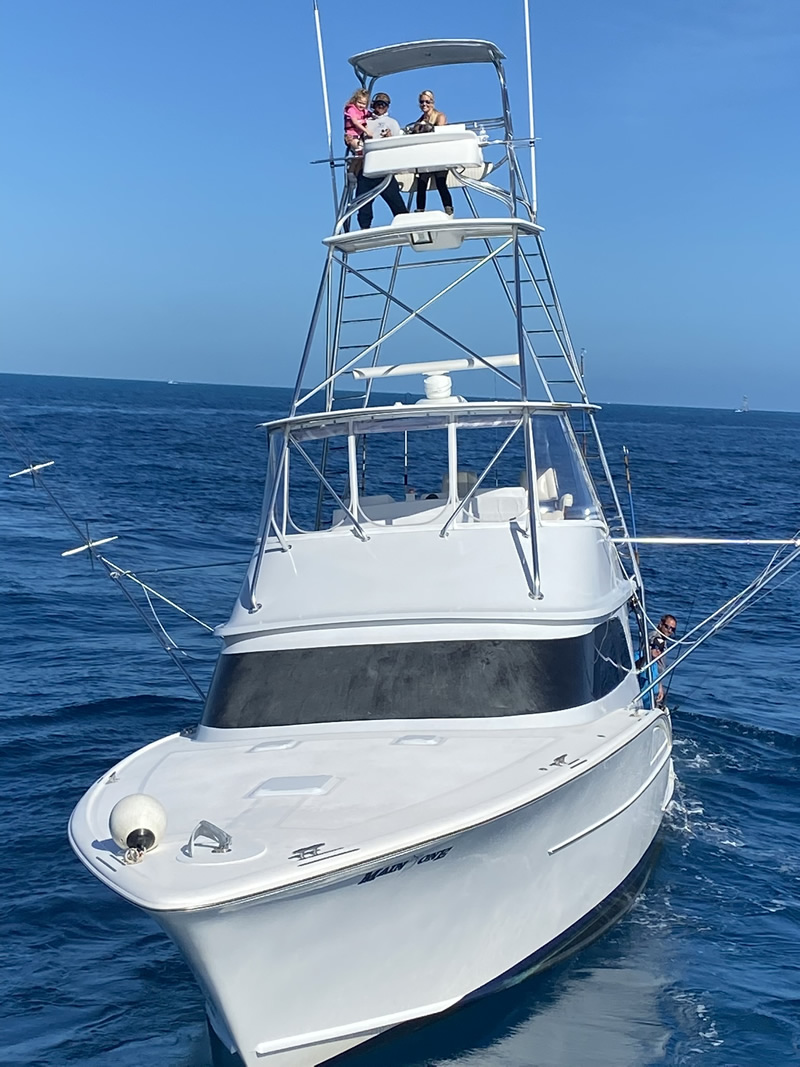 Marty looked over at his wife as the friendly boat departed and told her to hold on tight as he could see a bait shower in the distance. Marty hit the throttles and ran over to the fish.

This was a large shower of bait that Marty had seen, one he noticed from a few football fields away. When they approached the area, Marty spotted the Sailfish and slowed down to pull alongside it. Captain Marty started hollering and pointing, so the mates knew where to throw the bait. As soon as the bait landed, the Sailfish ate it and started freaking out and jumping!

Jeff was hooked up to his second Sailfish, now getting to fight this one for much longer than the first. Everyone on board was excited for him. Marty felt it was a special moment because he saw the whole thing from start to finish with his wife and daughter in the tower. 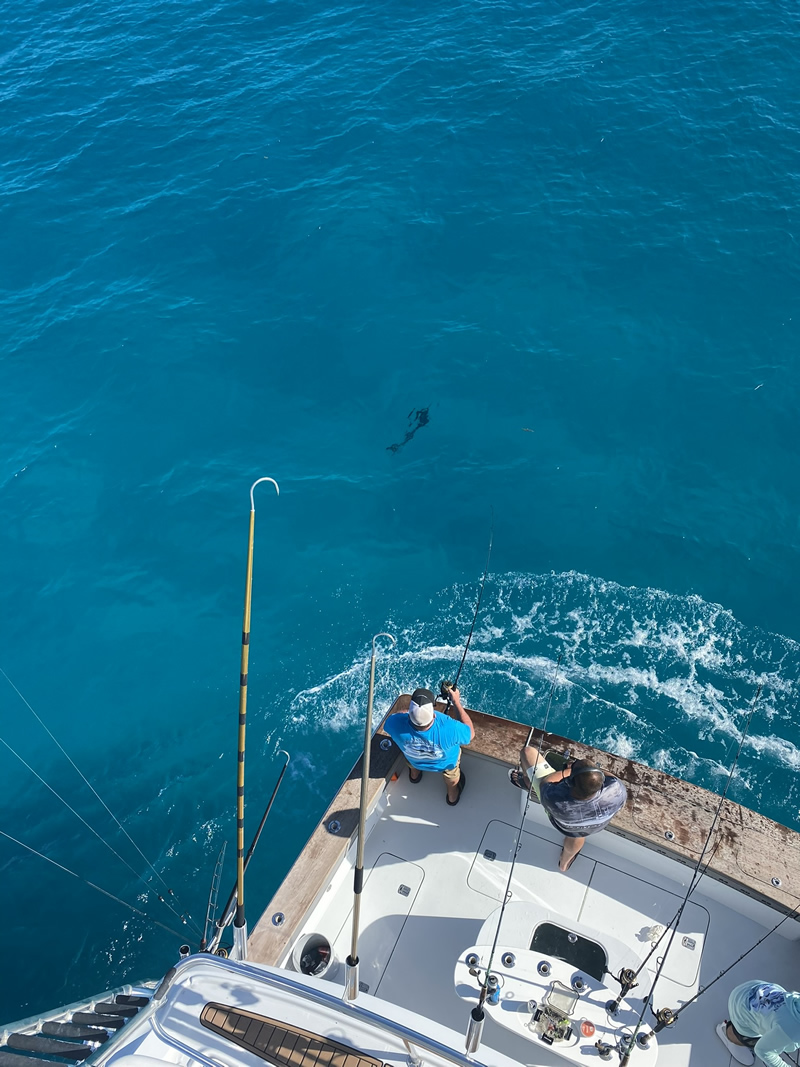 The view from the tower while Jeff catches the third Sailfish of the day.

When asked how she feels about fishing for Sailfish all these years, Katie said, “Sailfishing never gets old. The adrenaline rush you get when you see one is like no other. Whenever I get to cast bait at a sailfish, I can feel my heart thumping with excitement! No matter how many Sailfish I catch with my husband, it is just as exciting as the first. I believe that’s why we love to fish.”

At the end of the day, everyone had a wonderful time, and the official tally was three Sailfish caught on the very first day of 2023. If you want to make your own memories in the Florida Keys, consider a charter aboard a Main Attraction vessel. For more information, call us at 305-289-0071 or visit our contact page.