All About The Florida Keys Dolphinfish – Facts about  Mahi-Mahi

This is the first installment of a series we plan to write about the many unique species of fish in the Florida Keys. Our past articles often tend to focus on catching fish in the Keys and the techniques we use to catch them but not so much on the species themselves. The fact of the matter is the more you know about the fish you are targeting the better you will be at catching them! Knowledge gained about a fish’s eating habits, migratory patterns, and general tendencies, help you catch them more efficiently.

Understanding species desirability as food, spawning behaviors, and lifestyle, helps you make more informed decisions on whether or not to take its life or release it. With decades of experience, our Captains are veritable cornucopias of information on the subject matter. This article is a result of these experiences and some research of publicly available scientific information to corroborate their anecdotal evidence. We hope you enjoy it!

It’s All In The Name

In the Florida Keys, we commonly refer to the Dolphinfish as Dolphin. These are fish and not to be confused with “Flipper” which is a mammal that we refer to as porpoise in the Florida keys. We often will use the Hawaiin version of the name around tourists to avoid this confusion, which is Mahi-Mahi. In Mexico, they are referred to as Dorado. Scientists know them as Coryphaena hippurus. Nearly every country in the world has a different name for them, but whatever you call them, these fish have made a profound impact on the lives of millions of humans throughout the globe. 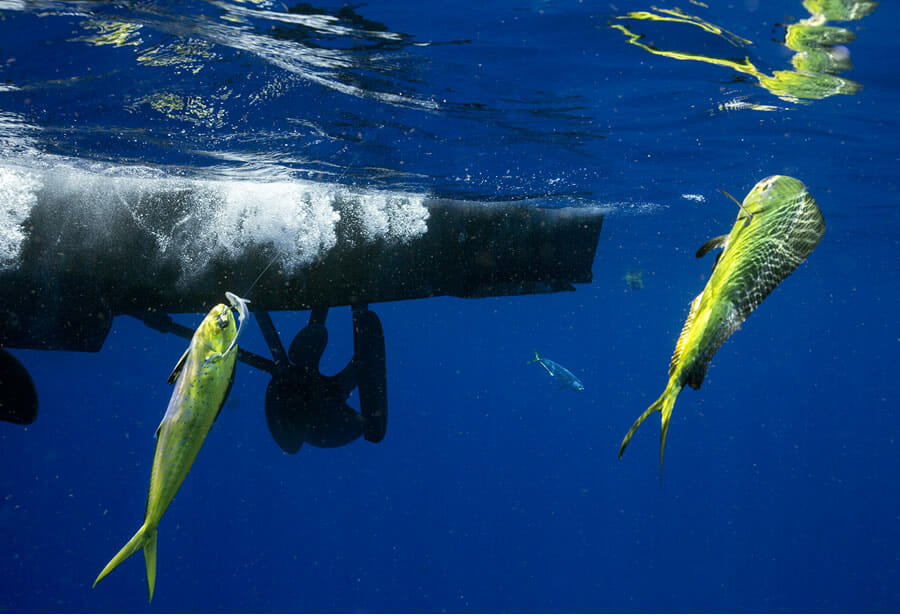 A pair of young Mahi behind the Main Attraction I.

The Dolphinfish is special because of its ability as a species to survive immense pressure from fishing industries throughout the world due to its ability to reproduce and grow quickly. Mahi-Mahi are highly sought after by recreational fishermen for sport, as well as commercial fishermen to sustain their income. As a tasty, plentiful, sustainable source of nutritional, low-fat protein that is rich in vitamins and omega-3s, you will find Mahi on dinner tables and restaurant menus around the world.

Mahi can survive the pressures of fishing because they are able to reproduce rapidly compared to other species. In just 3-4 months a Dolphinfish will grow from tiny larvae to over a foot and a half long and be sexually mature enough to reproduce! A female Mahi which we refer to as a Cow, can spawn 2 or 3 times per year producing anywhere from 100,000 – 1,000,000 eggs each time.

Dolphinfish are also the fastest-growing fish in the ocean, capable of lengths over 4 feet in the first year of life, and over 6 feet in four years. In captivity, Dolphinfish have been recorded with growth rates as high as nearly 3 inches per week. 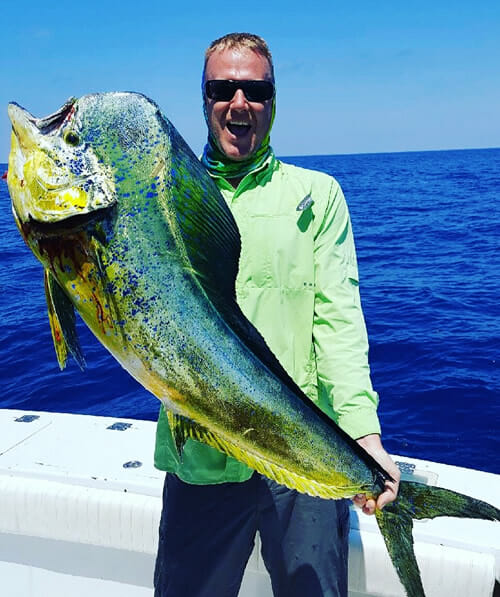 Dolphinfish are considered ocean predators as they eat voraciously and are quite opportunistic feeders. They are phenomenal swimmers that can burst at speeds of nearly 60 mph! They love to catch and eat flying fish, even mid-air. It is this behavior that attracts birds, allowing us to see signs of Mahi from great distances when fishing offshore. Dolphinfish eat octopus, squid, crustaceans, small fish, and jellyfish. Mahi can consume anywhere from 6%-20% of their body weight in one day!

On most days Mahi will readily eat cut up pieces of fish, shrimp, or lures presented by anglers. If the scent of the food doesn’t get them excited, sometimes just twitching the line and adding some movement to the bait will trigger a bite. Often all it takes is for one Mahi to bite to get the whole school fired up!

When trolling for Mahi in the Florida Keys the first hooked fish is reeled in close to the boat and then left in the water to bring the whole school behind the boat as the anglers cast baited lines at them. Often an entire school of Mahi can be caught by a boat with this technique. If a fisherman finds a school of Mahi that isn’t hungry or willing to feed at all, it often means that school has already been picked over by another boat. Mahi are not just food for humans, they are also an important part of the diet of large Tuna, Marlin, Sailfish, Swordfish, and Shark. 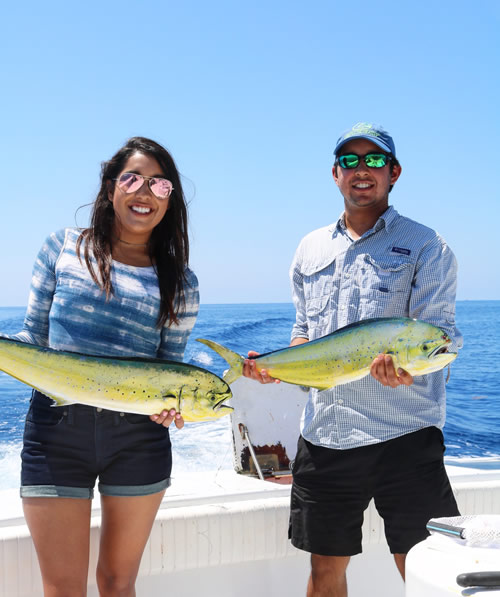 Dolphinfish are pelagic fish meaning they do not live on or near the bottom, instead, they live throughout the water column (usually near the surface). Mahi like to travel, they are constantly on the move, feeding along the way often on terrified baitfish hiding under patches of floating weeds, tree limbs, and manmade objects. Dolphinfish that have been tagged have been tracked moving as much as 20+ miles per day over prolonged periods. Regarding the Atlantic ocean which is where the Main Attraction team fishes for Mahi, they can travel as far North as Massachusetts before heading back down to the Florida Keys. In the Spring-Summer months, you will find them in the warmer tropical waters of the Florida Keys and Caribbean where they tend to spawn. 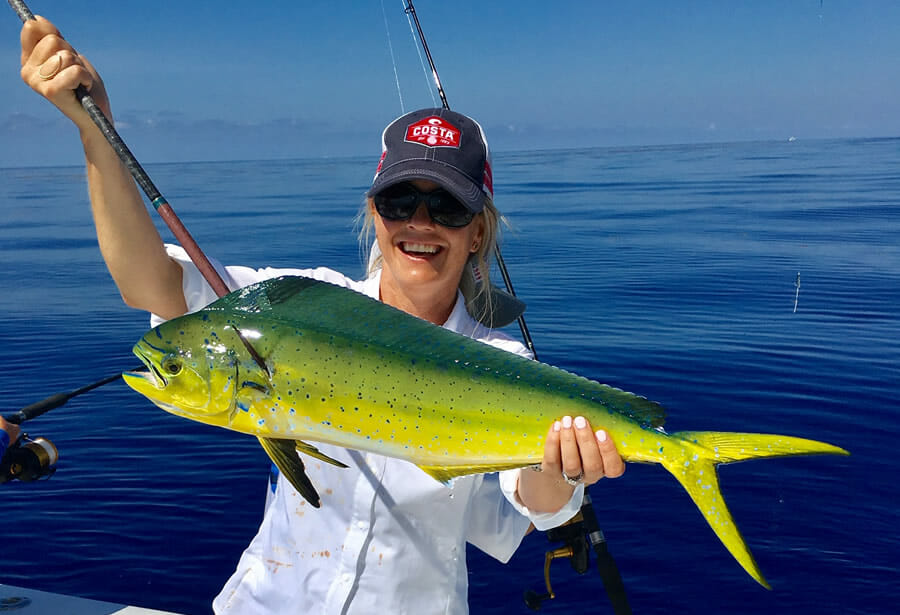 Notice the rounded forehead of this female cow dolphinfish.

Dolphinfish live fast and die young. They usually won’t live past 3-4 years before they are captured or eaten. While a rarity some Mahi do reach the maximum lifespan of around 6 years before they die of old age. By then, a Mahi can reach upwards of 6.5ft long and weigh 80-90 pounds. The world record Mahi was caught at 87lbs, it was a Bull Mahi as they tend to weigh more than their female counterparts. While smaller to average-sized Mahi typically travel in schools, our crews find very large Mahi usually travel in much smaller numbers. It is believed by most of our Captains and Mates that Mahi when older, pair up in couples.

While animals that mate for life are rare in the animal kingdom, this is a scenario often witnessed by our crew members. When they spot an unusually large Dolphinfish there is almost always a mate nearby. Countless times a crew of ours has hooked a large Dolphinfish and simply waited for its mate to show just to catch it as well. A bull is identified with its large square-shaped head and a cow by its smaller size and round head. 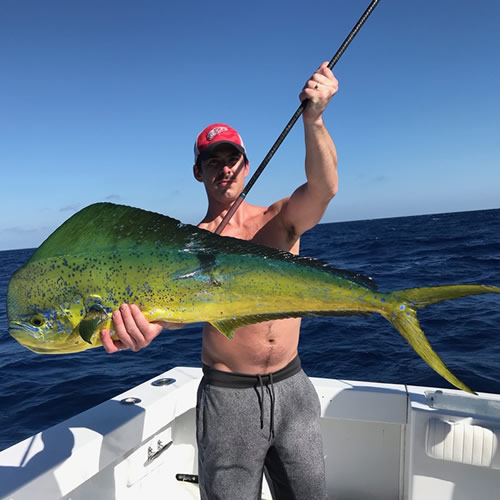 Dolphinfish are magnificent. They can display colors that are bright green, yellow, blue, and white. There are mysteries about Mahi that we don’t fully understand to this day. Our crews interact with these fish daily throughout the spring and summer and have seen some pretty interesting color combinations. Many of our crew are convinced that the Mahi change their colors based on mood. We have often seen a light-colored Mahi turn bright green the moment it turns to eat a bait as if a light switch was flipped! While this is simply based on anecdotal evidence, many of our crew believe when a Mahi is bright blue or white it is calm, when it is bright green it is aggressive and fired up, and when it is bright yellow it is in distress. Whatever color your beautiful Mahi is when you boat it, if you want it to maintain its beautiful bright color and not turn a pale gray color you need to put it in an ice-cold briney fish box immediately! 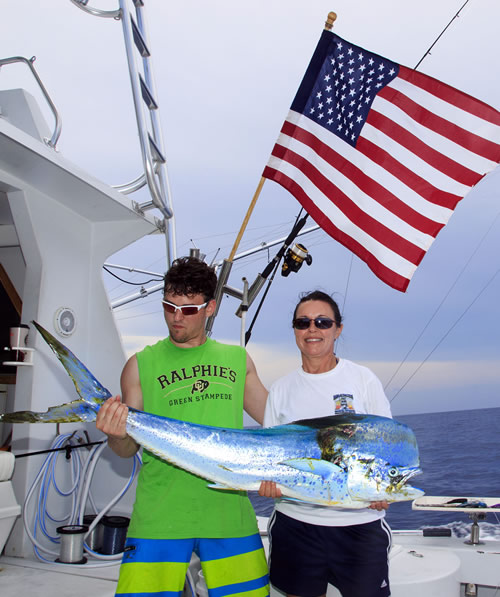 Another interesting fact about Mahi is there are 2 types of Dolphinfish. While we have been discussing the Common Dolphinfish throughout this article there is also the Pompano Dolphin (Coryphaena equiselis) which is often confused with the common Dolphinfish. Pompano Dolphinfish are sometimes caught while catching common Mahi in the Florida Keys. They are a rarity as our crews probably catch one for every thousand commons they catch. Pompano Dolphinfish do not grow as large as their counterparts. The males have a less pronounced square-shaped head and their sides are silvery to golden color while most of the brilliant colors are located solely on their backs. While a rare catch for us in the Keys from a sustainability point of view, Pompano Dolphin is just as good to eat and considered just as prolific as their common counterparts.

We hope you have enjoyed this first installment of our “All About” series, and if you wish to learn more about the techniques we deploy while catching Dolphinfish read our brief article about Mahi Fishing Charters in the Florida Keys or if you wish to read an in-depth guide see our more recent article The “Secret” to Successful Mahi Fishing Trips in the Florida Keys.

As always if you wish to catch some Dolphinfish on your next trip down to the Florida Keys call us at 305-289-0071 or visit our contact page and we would be happy to take you out for a fun day on the water!