August 2020 kicked off with some excitement last week. Captain Marty had some nice folks for a full day offshore. Ralph and his friends originally canceled their trip due to tropical storm Isisais and its potential impact on the Florida Keys. We all watched the weather for a few days and since the Keys didn’t even get a drop of rain, Ralph decided to go fishing. The plan was to go offshore and it was a good one! The team of guys caught Mahi (Dolphinfish) and Blackfin Tuna! But the most interesting find was on the way in. Captain Marty was heading towards Key Colony Beach when he saw something large floating. He drove to it and low and behold it was a capsized motorboat. Marty has been on the water regularly since he was a teenager and has seen it all so he knew what to do! First he and first mate Christian, tied the boat to their vessel to try and flip it. It took a few tries, but on the 3rd try, he flipped the vessel and was able to drag it to eliminate all the water from the hull. Captain Marty made contact with the Coast Guard and explained to them what he had found. The Coast Guard happened to be out on the water looking for this very same vessel.

The Coast Guard said the passengers were rescued the day before, as it was quite windy out and this vessel was rather small. From what they explained, the vessel took a wave wrong which caused it to capsize. The owners of the vessel had already packed up from their vacation and were heading home when Captain Marty made contact with them and let them know he had recovered their boat. 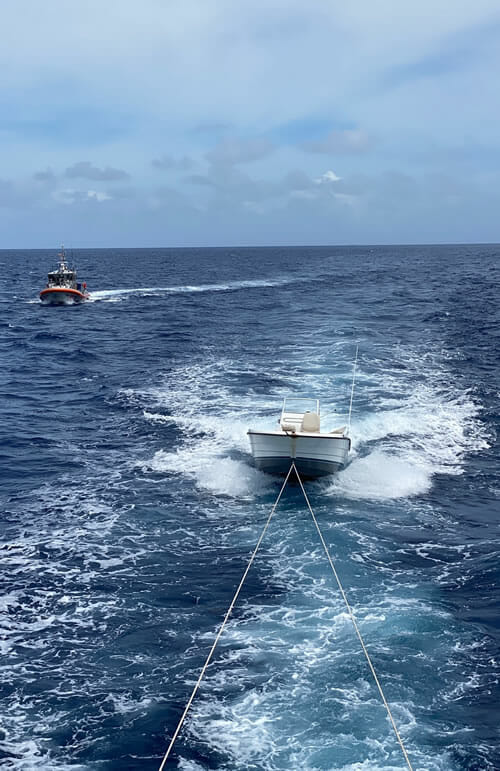 The owners were elated! They thought their boat was gone forever and graciously offered Captain Marty a reward. As we always say, every day is different on the ocean, and you never know what you will find. Needless to say, Ralph and his buddies had a trip to remember! 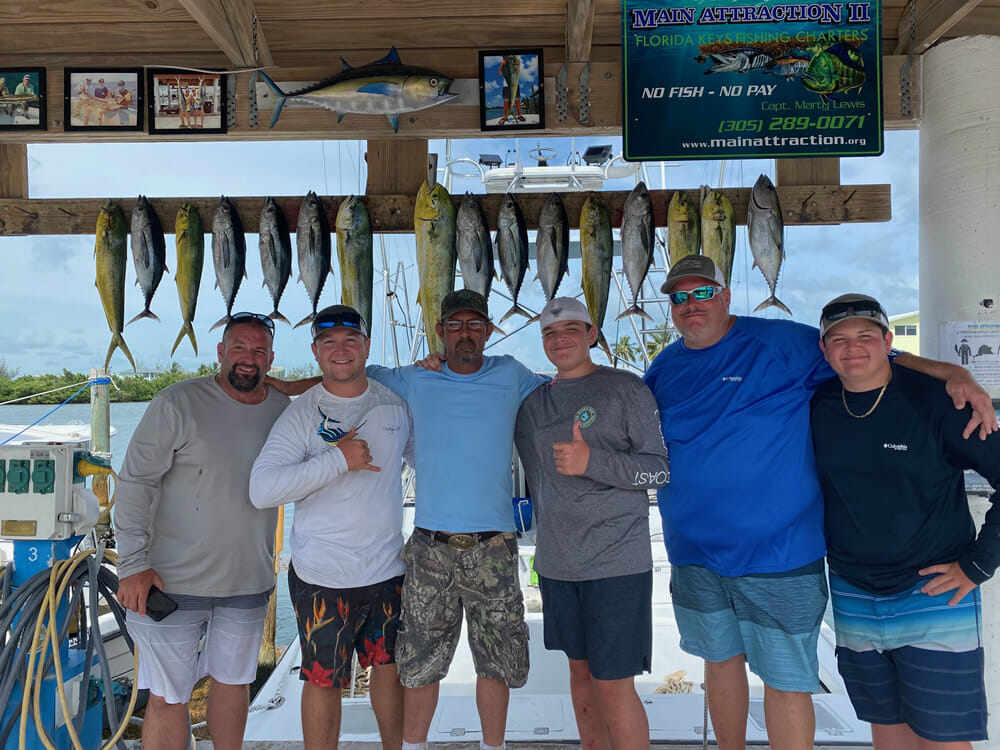 Later on that week, the wind died down and we had a large party of 12 people, split between our two larger boats, Main One and Main Attraction. Both vessels were heading offshore to catch the typical summertime pelagics, Mahi and Blackfin Tuna, but with it being so calm, Captain Marty and Captain Travis explained to their customers, they might have a good shot at a swordfish. Both boats were prepared for deep drops at the swordfish ledge. Captain Marty had a sword hook up but shortly after it got off. Captain Travis on the other hand, had a hookup and a long fight! Around 5 pm Captain Marty called back to port via Satellite Phone to let his wife  Katie know all was well, and they were watching Main Attraction fight this large sea beast! After a 6 hour battle, Captain Travis and first mate Joe was able to get a harpoon in the fish and up to the boat. Since both boats had the same party, Captain Marty kept his boat in close range so his customers could see the epic fight. What an exciting afternoon! Not only did they catch lots of Mahi, but they also caught a fish of a lifetime. The swordfish weighed in at 230 pounds! 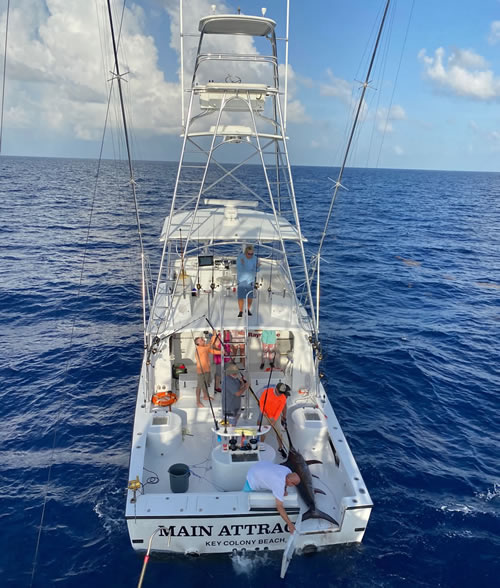 Since the fight took so long (6 hours), the boats did not arrive back to port until 8 pm. It was a long day for everyone, but so worth it! Then the team had tons of fish to clean. The customer, Chris, was so impressed with the overall operation, he has since rebooked and plans to fish again this week. We love making lasting impressions on clients and building relationships with them year after year. If you would like to fish in the Florida Keys with crews that go the extra mile, give us a ring at (305) 289-0071 or visit our contact page. 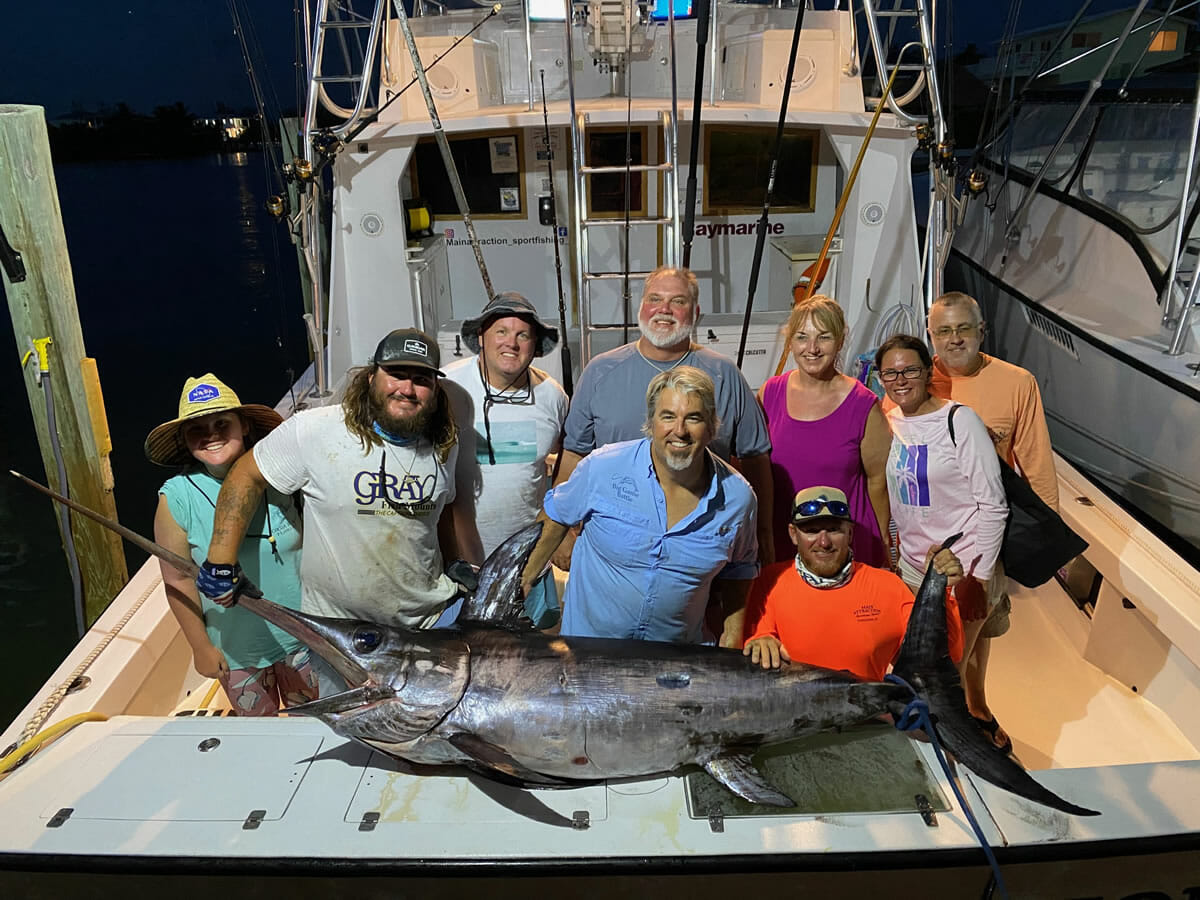 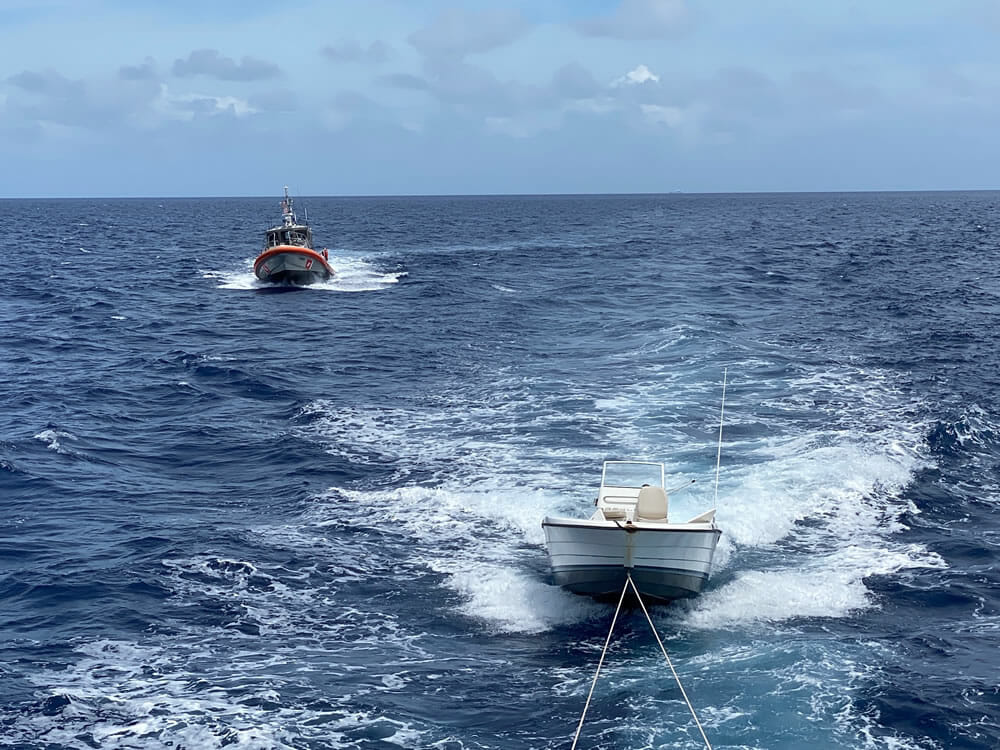 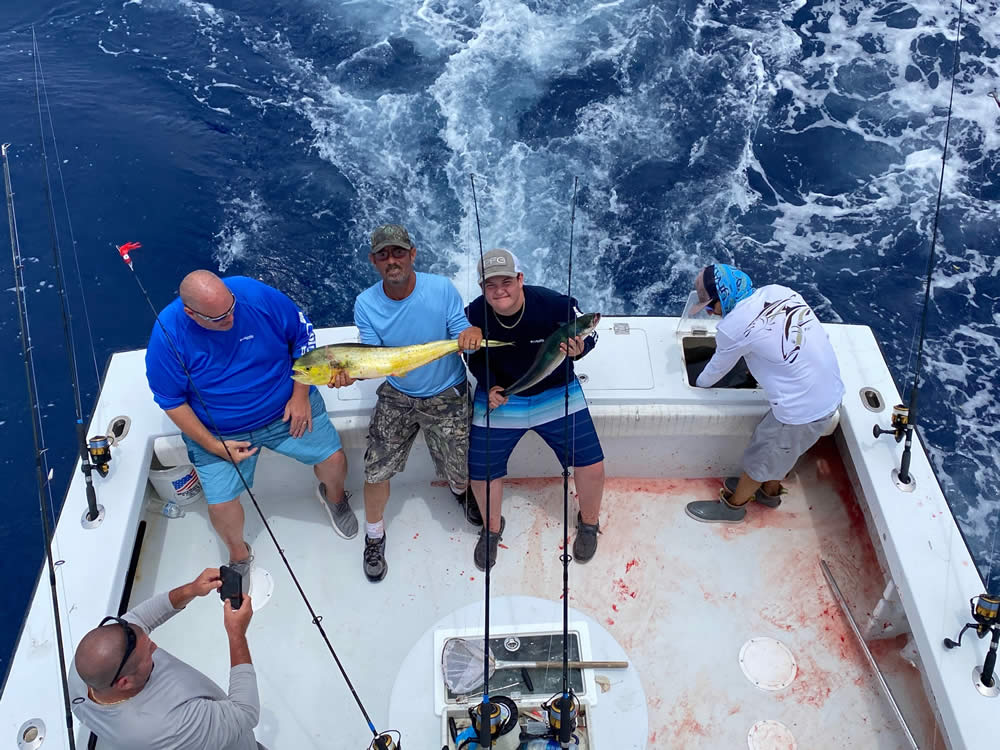 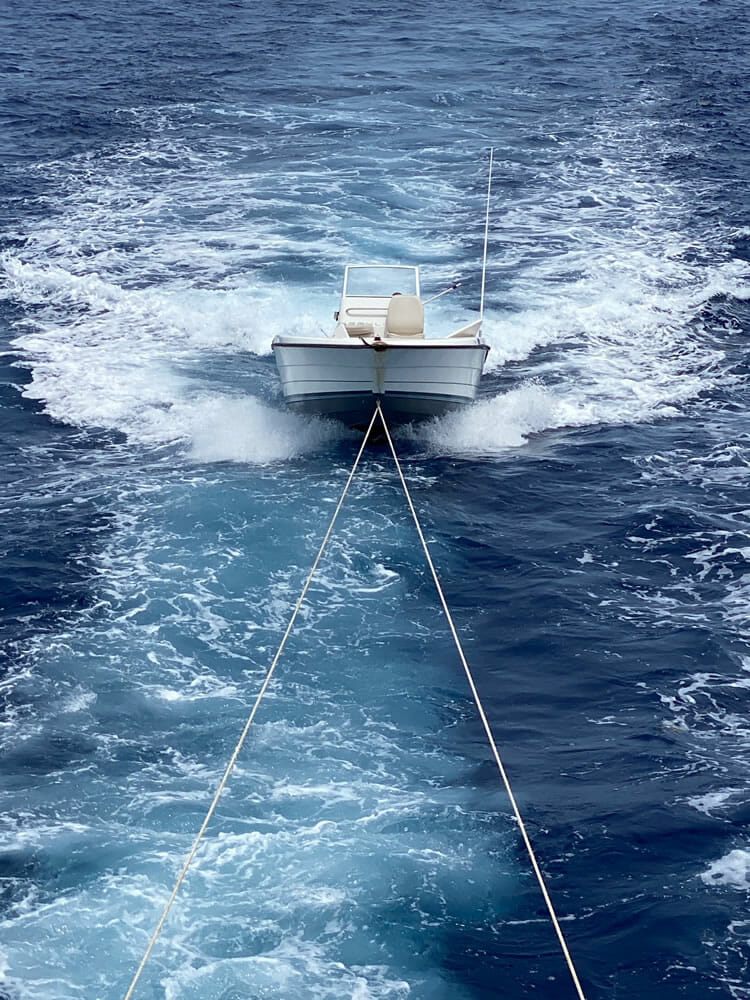 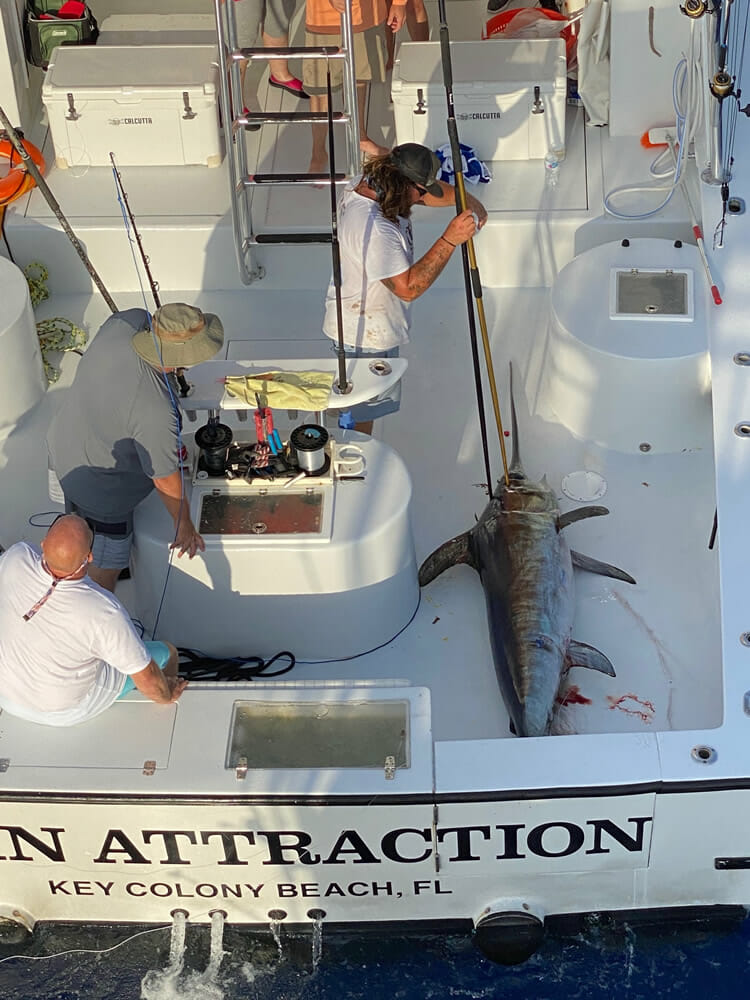