On Saturday, April 11th, first mate Digger Rodamer sent out a group text to the Main Attraction crew suggesting a Sailfish trip on Easter Sunday. Digger and Captain Marty Lewis saw each other earlier that day while fishing off the Marathon hump. Captain Marty had taken his wife, Katie, and young daughter tuna fishing. Based on the conditions they saw offshore both Marty and Digger had a feeling the sail fishing was about to be great. With it being a holiday and having children, Marty asked his wife and business partner, Katie, how she felt about him taking the Main Attraction crew fishing on Easter Sunday. She gave him the green light and told him to have a great time and good luck. Captain Marty sent out a group text to the crew and put together a plan to catch live bait at 5:45 Sunday morning. Digger Rodamer, Shelby Bentley, Aaron “Nautical” Sutcliffe, and Joe Marino were all scheduled to take the bait boat and load up the live wells.

While the bait crew loaded up on live Pilchards, Captain Marty Lewis and Steve Fitzgerald prepped the Main One. The Main One is our largest vessel in the Main Attraction Fleet, a 49’ Custom Sports-Fisherman outfitted with twin 800 HP Caterpillars, and top of the line Raymarine Electronics. At 7:45 am, the boat left the Key Colony Beach Marina and headed West in search of Sailfish in the gulf stream. When the conditions are good, the stream pushes closer to shore, in approximately 200’ of water. The Sailfish use the fast-moving warm waters of the stream to travel.

That morning the winds were out of the Southeast and blowing 10-15 mph. The water was a powder blue and there was plenty of sunshine which meant Captain Marty would be able to see the fish from the tower and the crew would be able to pitch baits in front of the fish. Our Captains and crew wear polarized Sunglasses provided by Costa, which help them spot the sailfish tailing on the surface. Sailfish look like dark brown/black garbage bags in the water or like logs floating up on the surface. Occasionally you will see their tail pop out of a wave which we refer to as tailing.

Captain Marty ended up off American Shoal, which is right off Big Pine Key. The first fish was caught around 10 am, on a Penn light tackle set up, by Aaron Sutcliffe. Once the first fish was caught, the crew found themselves surrounded by more Sailfish and it was organized chaos in the cockpit. After about 40 minutes, the team had caught and released 5 sailfish. The crew was pumped after such an incredible start! 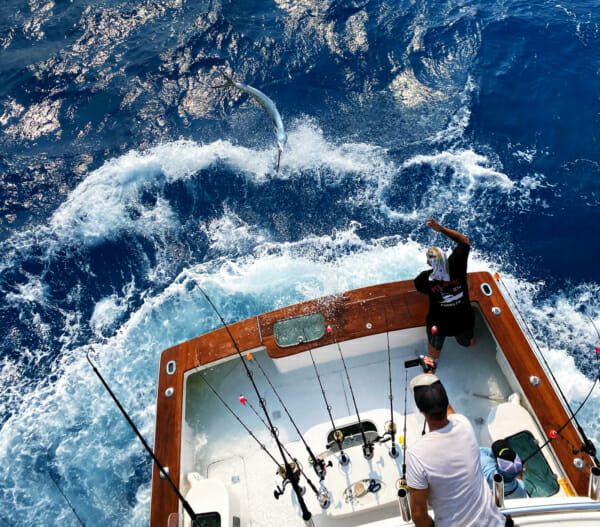 As the day progressed the fishing just kept getting better and better. Captain Marty was in Main One’s tuna tower, along with other crew members to help spot and point out all the fish. It was fun and pandemonium throughout the entire day! The crew was hooking fish, releasing fish, re-rigging the rods, grabbing live baits, all while dancing around each other to catch more fish. Several rods throughout the day were completely spooled, as fish were running off the bow of the boat, and several others were stretched far off the transom.

There were as many as 4 sailfish all hooked up and fighting at the same time. Just as the crew would catch one Captain Marty would scream to “Get ready” and point in the direction of another fish. When you hear Captain Marty’s voice go up several octaves, you know fish are close by and you better be ready with live bait! First mate Digger knows all too well to look up at the tower and watch for Marty’s arm direction, as they have been working together for over 10 years now. 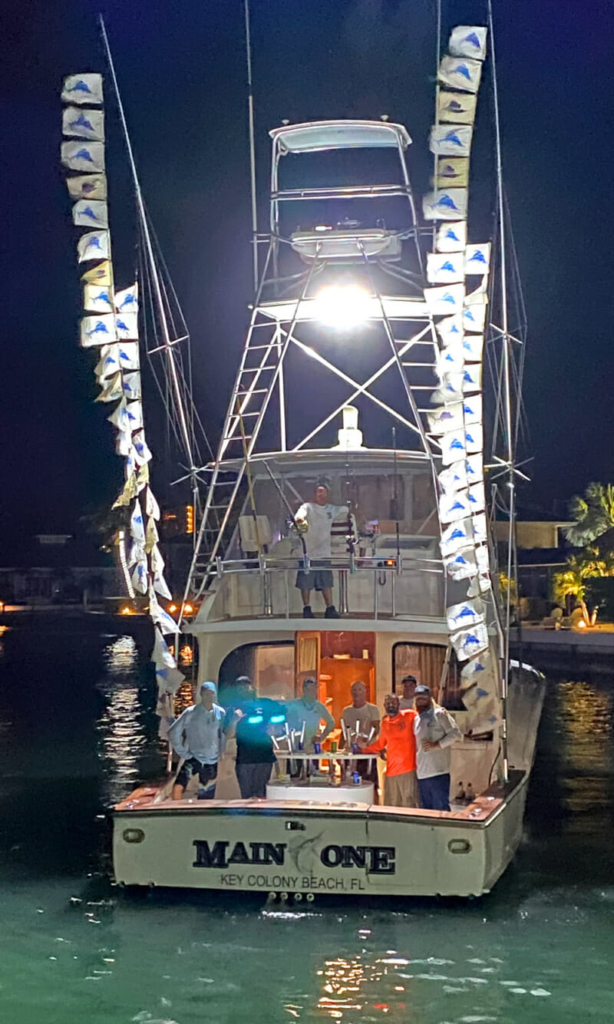 Not only were the crew enjoying the action-packed fishing of the day, but they proceeded to poke fun at one another and really enjoy themselves. With all the negativity surrounding the COVID-19 pandemic, the guys expressed how nice it was to be offshore and take their minds off reality for a day. The Florida Keys have been shut down for several weeks now, from the pandemic, which eliminated the majority of the boat traffic. Also, with it being Easter Sunday, Main One found themselves the lone ranger on the ocean. The fish were hungry, only two fish refused to eat.

Throughout the afternoon, the winds picked up, and the team was now facing 15-25 mph winds. Captain Marty was backing down strongly on the fish to get to the leader, while anglers and crew members were taking waves in the face as the cockpit filled with water. The crew laughed about how many times the tuna door was open releasing water back into to the ocean. First mate Joe, our regular jokester, laid down in the cockpit on his belly and proceeded to “swim” in the standing water.

The fish numbers continued to climb and the crew all knew by 3:15 pm with over 40 sailfish caught and released, they had a real shot at breaking their previous record of 61 sailfish in one day, and possibly breaking the Florida Keys record of 65 sailfish in one day. At 5:00 pm, Captain Marty had texted his wife, Katie, the number “60” and proceeded to follow it up with HOLY $HI*. He could have never imagined it would be this good and his adrenaline was pumping. The crew was really on their A-game, catching and releasing as fast as they could.

The final text came through at 6:35 pm and read “70 and done”. Captain Marty and crew had broken their record along with the Florida Keys record of the most sailfish caught/released in one day. They ended up off Key West and had several hours worth of travel time before returning to port.

What an amazing record-breaking day for the Main Attraction Sportfishing Team! Thanks to Steve Fitzgerald who brought along a video recorder, and managed to get some shots despite the high winds and waves. If you have any questions or comments please feel free to call us at 305-289-0071 or visit our contact page. 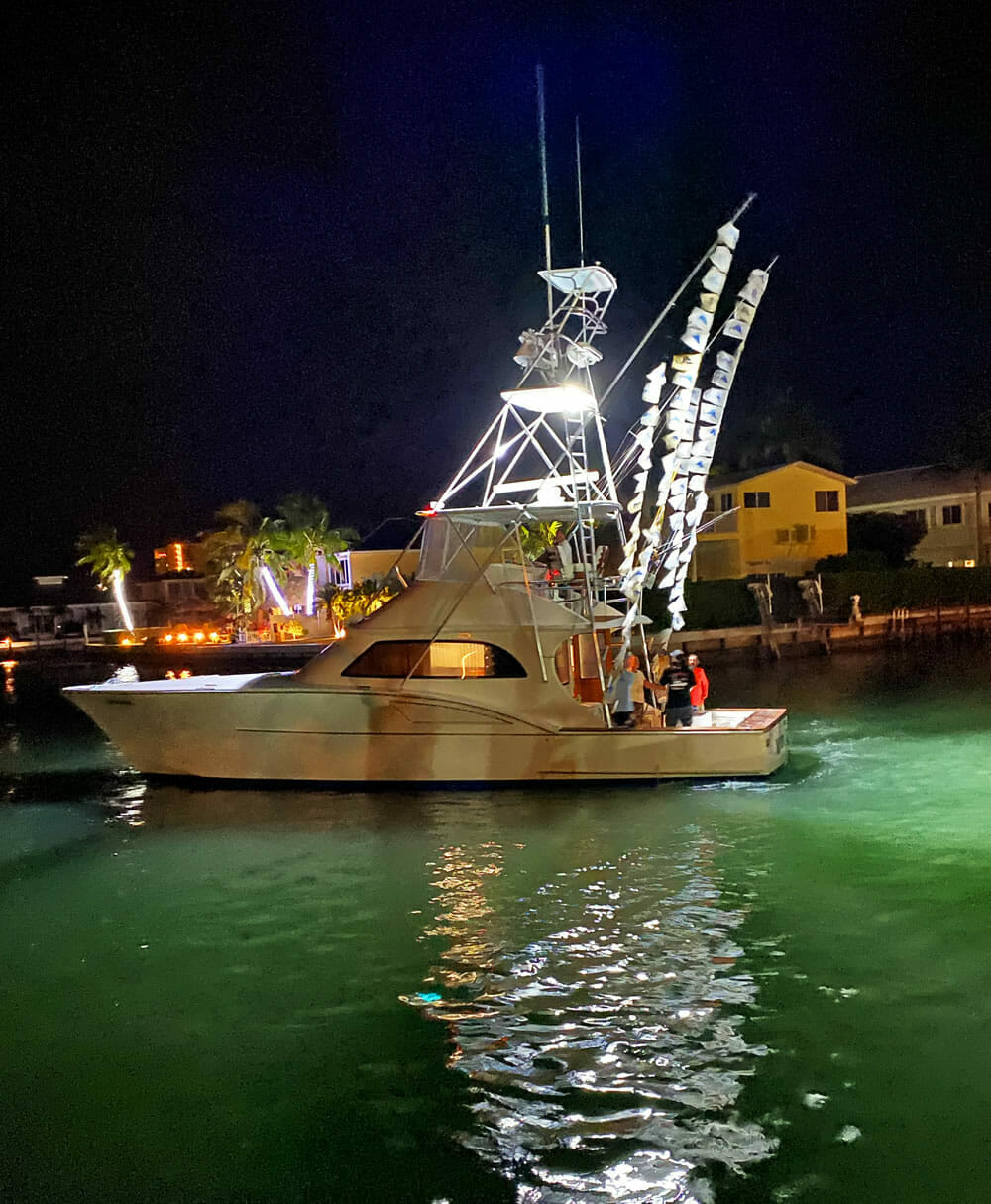 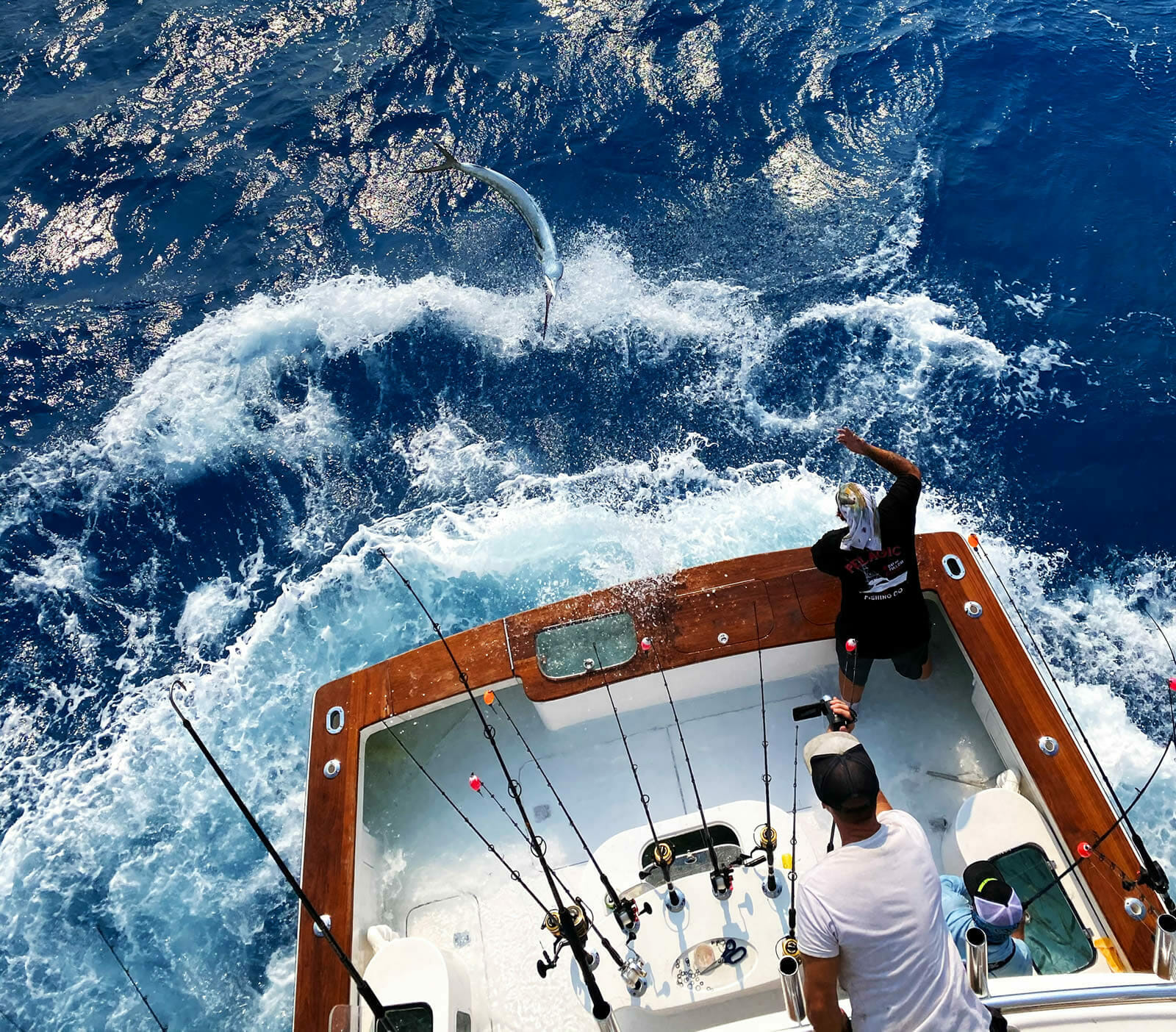 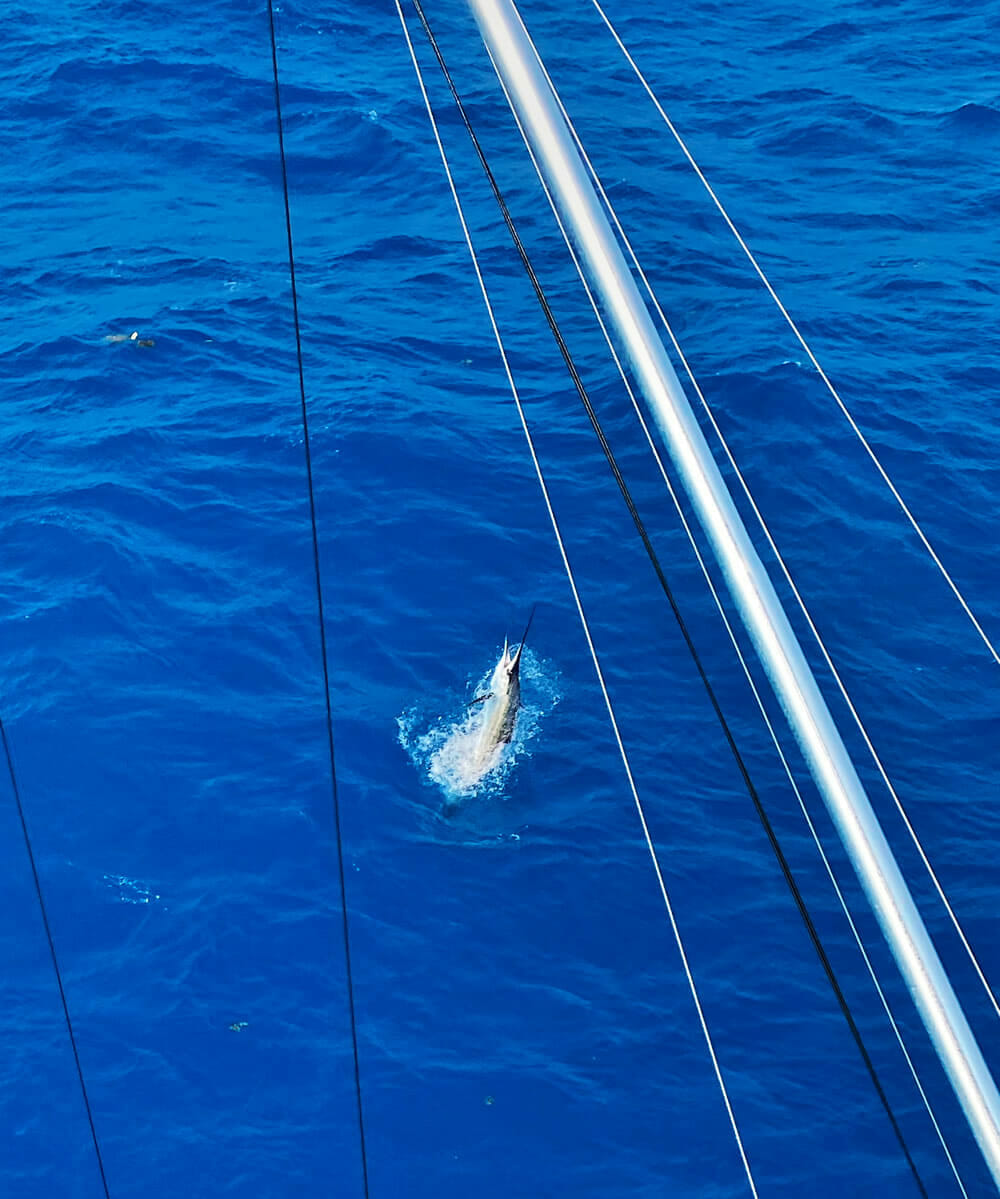 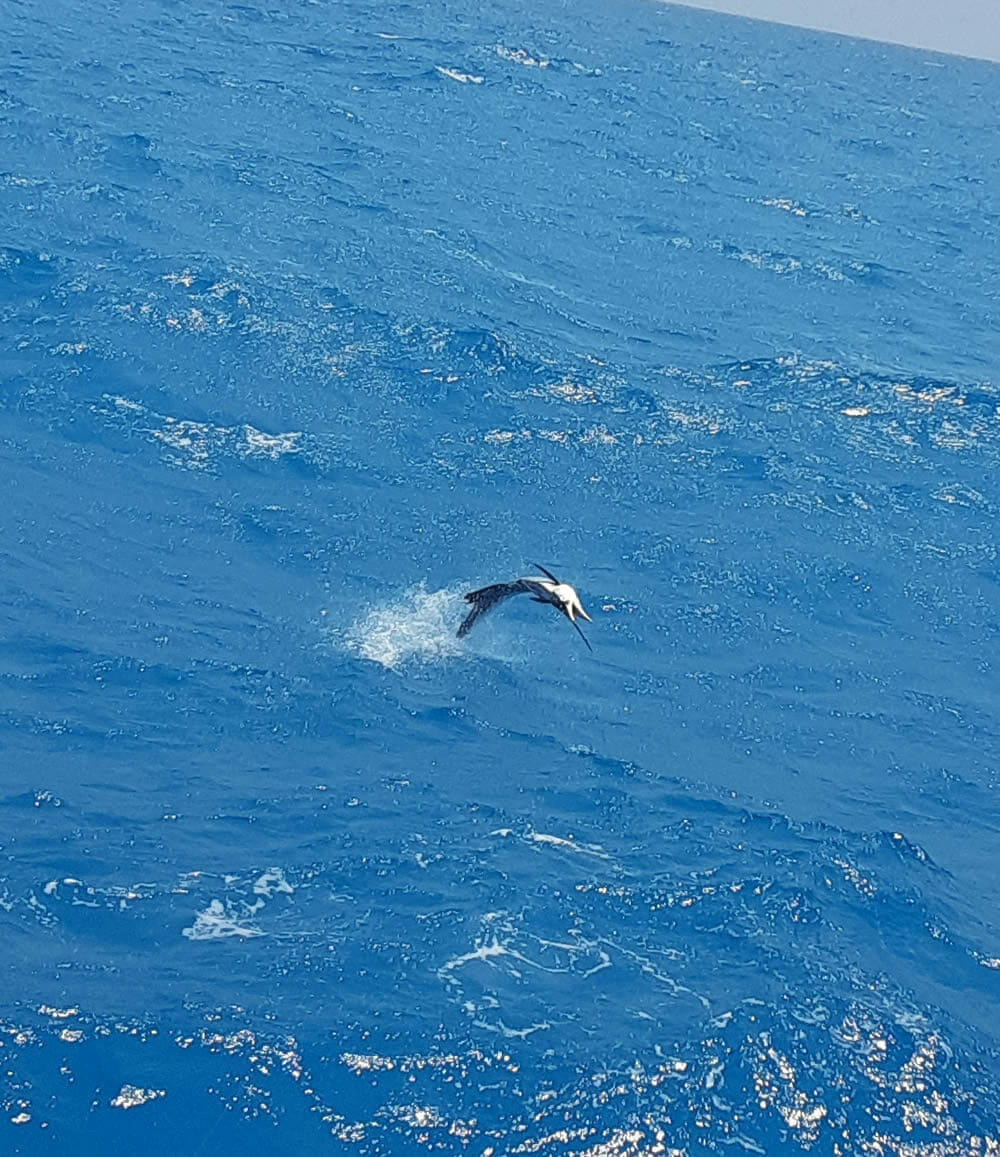 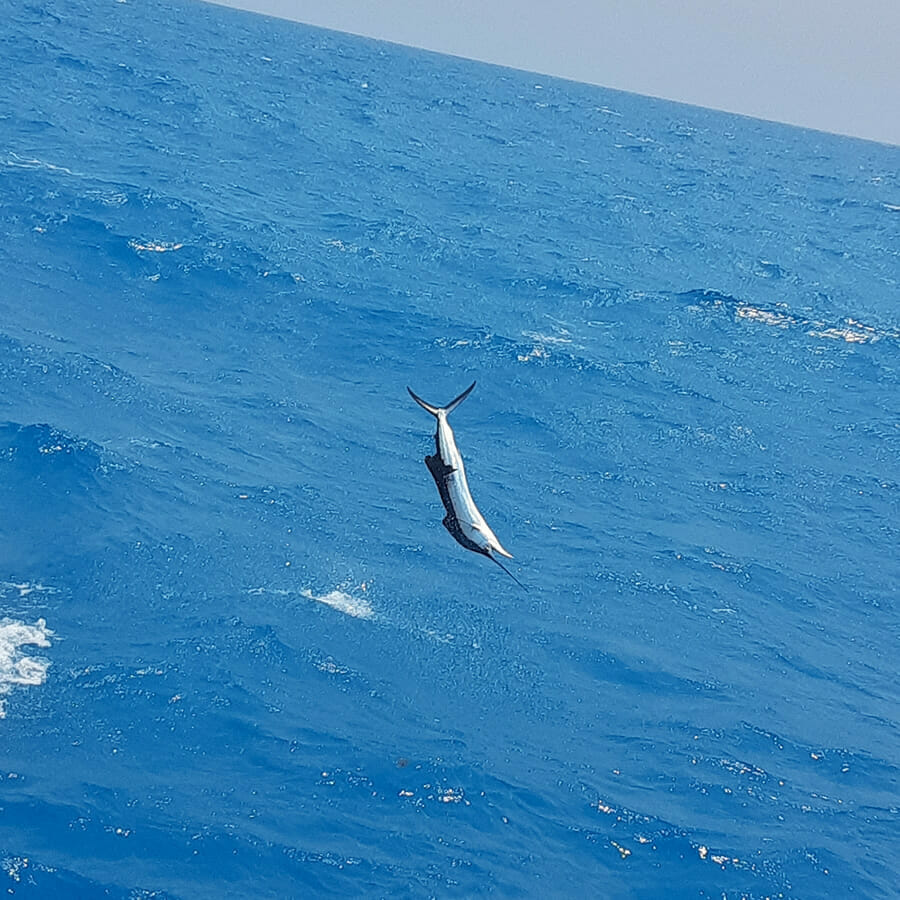