All About The Yellowtail Snapper – Facts About Florida Keys Yellowtail

Today instead, we will focus on the Yellowtail Snapper itself because while most of us know they are beautiful looking and delicious to eat, there is much more to learn about this fascinating species of fish.

Yellowtail Snappers (Ocyurus chrysurus) can be found in the Atlantic ocean along the East Coast of North and South America from as far North as Massachusetts all the way down to Brazil. They can also be found scattered throughout the Gulf of Mexico.

Populations seem to be heaviest on reefs located in South Florida, the Bahamas, and the Caribbean, which is precisely where recreational and commercial anglers most commonly target them. 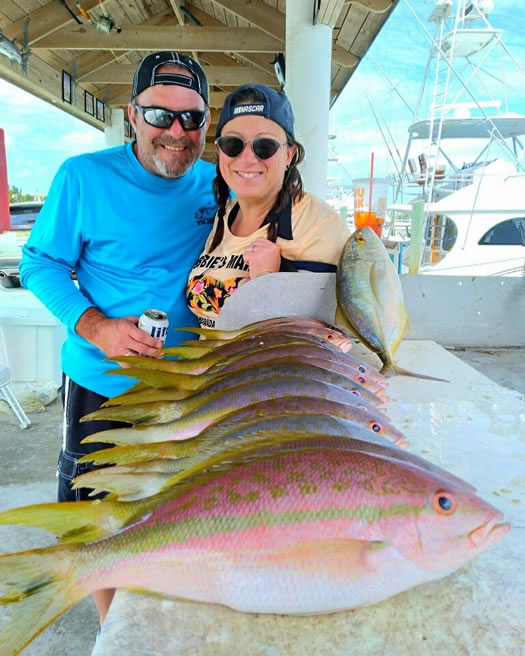 The Costello’s snap a photo with their catch of Yellowtail Snapper on a 4 hour reef trip.

As juveniles, Yellowtails hide from predators in grassy areas with a soft sandy bottom where you can often find shrimp. Because of this, shrimping boat trawlers often kill juvenile Yellowtail when harvesting the shrimp.

Despite this, Yellowtail is widely considered a sustainable source of seafood with stable populations. However, there is no global data for Yellowtail populations, making their conservation status officially unknown.

In the Florida Keys, young adult Yellowtails live among the corals and rocks on the reef where commercial and recreational anglers often target them. Yellowtail Snappers are not a migratory species; adults tend to stay in a single area for prolonged periods.

Large adults over 5lbs in weight, which we often refer to as Flags, live in deeper water, generally near rocks just past the deepest edges of the reef (60-90ft deep). Flag Yellowtails are trickier to catch, and we only target them when the conditions are right for it. 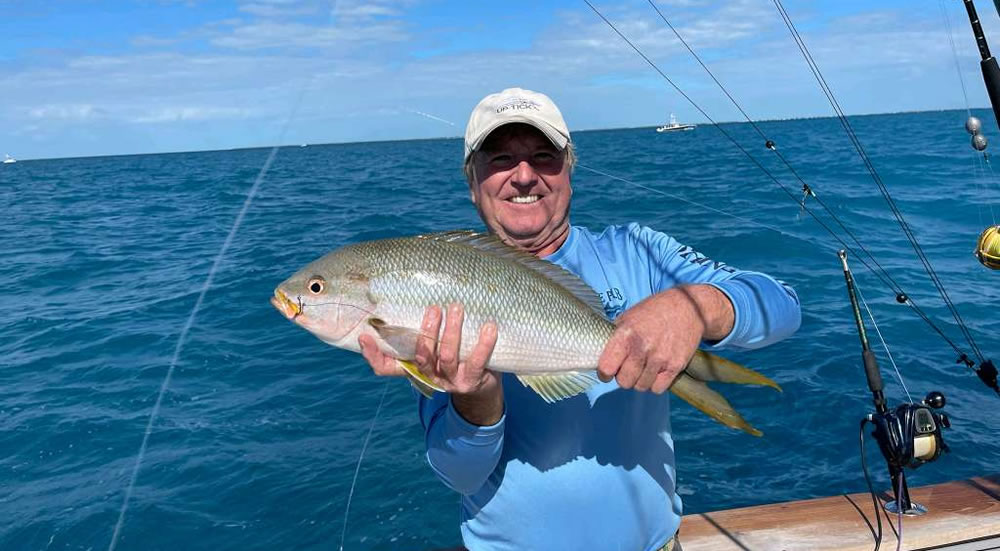 Flag Yellowtail are found in deeper waters near the edge of the reef.

Typically you will find Yellowtail in the 2-5lb range in the Florida Keys; once fully grown, Yellowtail can grow as large as 34 inches in length and have been recorded at weights as high as 11lbs! Yellowtail Snappers have a lifespan of 6-14 years. A research team in Florida studied about 1500 Yellowtail Snappers to investigate growth rates, and they found a 13-year-old Yellowtail that measured 27 inches long. (Source: Citation of Age and growth of yellowtail snapper.)

While adult Yellowtail do most of their hunting at night, a well-chummed spot on the reef is likely to draw a large gathering of Yellowtail Snapper any time of day. Like most snapper, Yellowtails haves small, fine teeth on the top jaw and larger ones on the bottom jaw.

It takes about three years for a female Yellowtail to reach sexual maturity, which is usually at a length of about 10 inches. Yellowtail will group up in open water and spawn en masse throughout the year but less so in winter. After fertilization within one day, the eggs typically hatch and sink to the bottom, where the larvae try to avoid predators and develop into fry.

When cooked, Yellowtail flesh has a mildly sweet, white flaky texture, with medium firmness that many locals prefer over the wide variety of other species available to them. Main Attraction Co-Owner Katie Lewis was kind enough to share her Yellowtail Snapper Piccata Recipe which is quite delicious!

Tourists also love Yellowtail for its flavor and quite often take their filets straight to a restaurant after their trip. Another reason Yellowtail Snapper is so popular with tourists in the Keys is that it freezes well. When they freeze their filets right after catching, the flavor and textures hold well until they have had time to get home and defrost their catch. 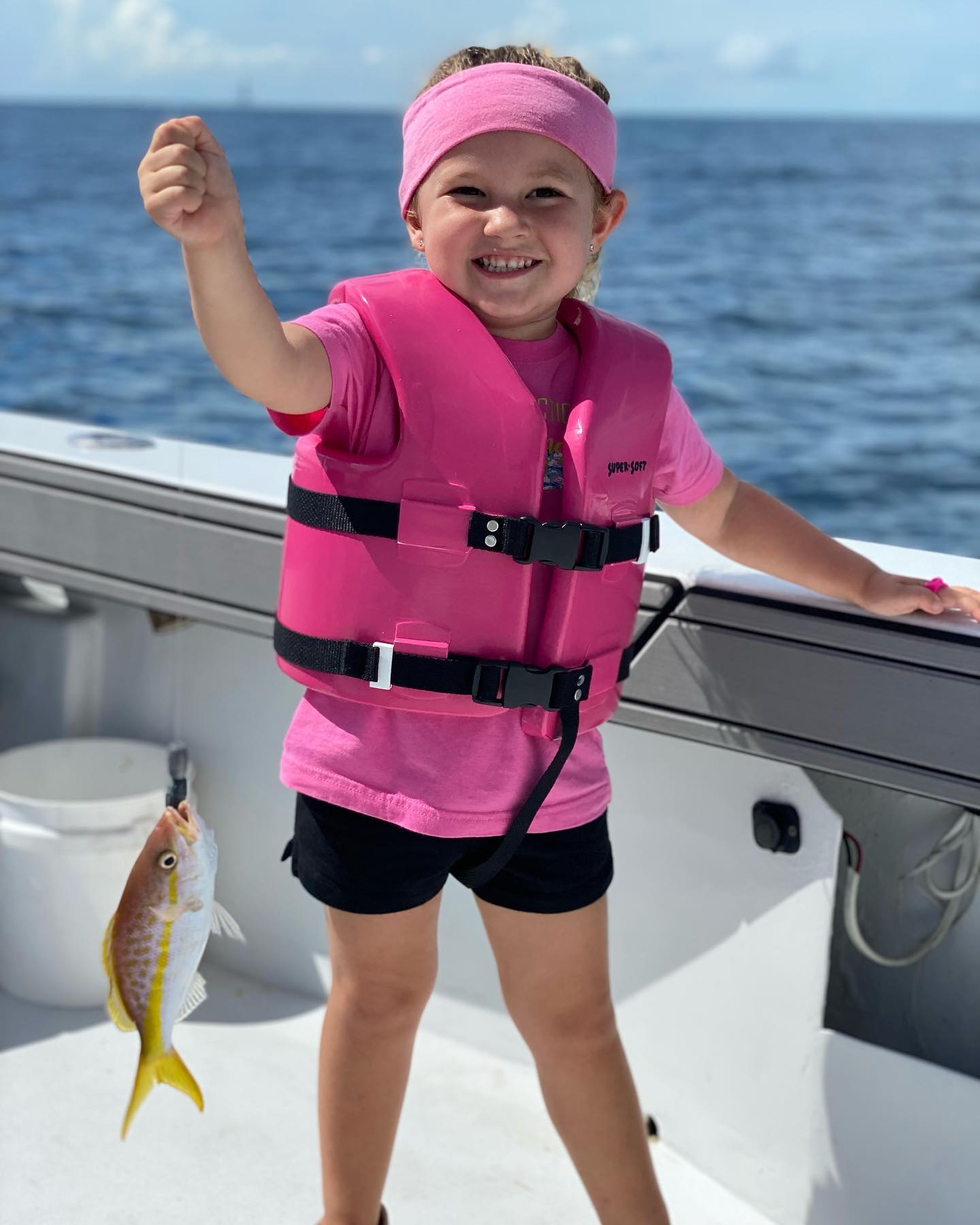 Researchers in 1992 proved the technical feasibility of farming Yellowtail Snapper (source: https://bit.ly/ytail_aquaculture ). While Yellowtail Snappers are considered a sustainable species that is flourishing in the wild there is no slowing down on this fish’s popularity. As populations continue to grow, pressure on the species can only increase. We recently reached out to FishEye Aquaculture in Dade City, Florida, who have mentioned online successfully breeding this highly prized and essential species in captivity but had not received any response when writing this article. If fish farms are indeed producing Yellowtail Snapper in captivity, it should be an excellent sign for the future of Yellowtail Snapper long term.

The Yellowtail Snapper is a beautiful and captivating species of fish that is tricky to hook and, once hooked, also puts up a wonderful fight on light tackle and ultimately rewards successful anglers with a delicious meal. Life is tough for such a tasty fish, but they keep fighting, reproducing, and we hope as a species they continue to thrive and prevail for many thousands of years to come. If you are interested in a Yellowtail fishing trip in the Florida Keys this winter, give us a call at (305) 289-0071 or visit our contact page. 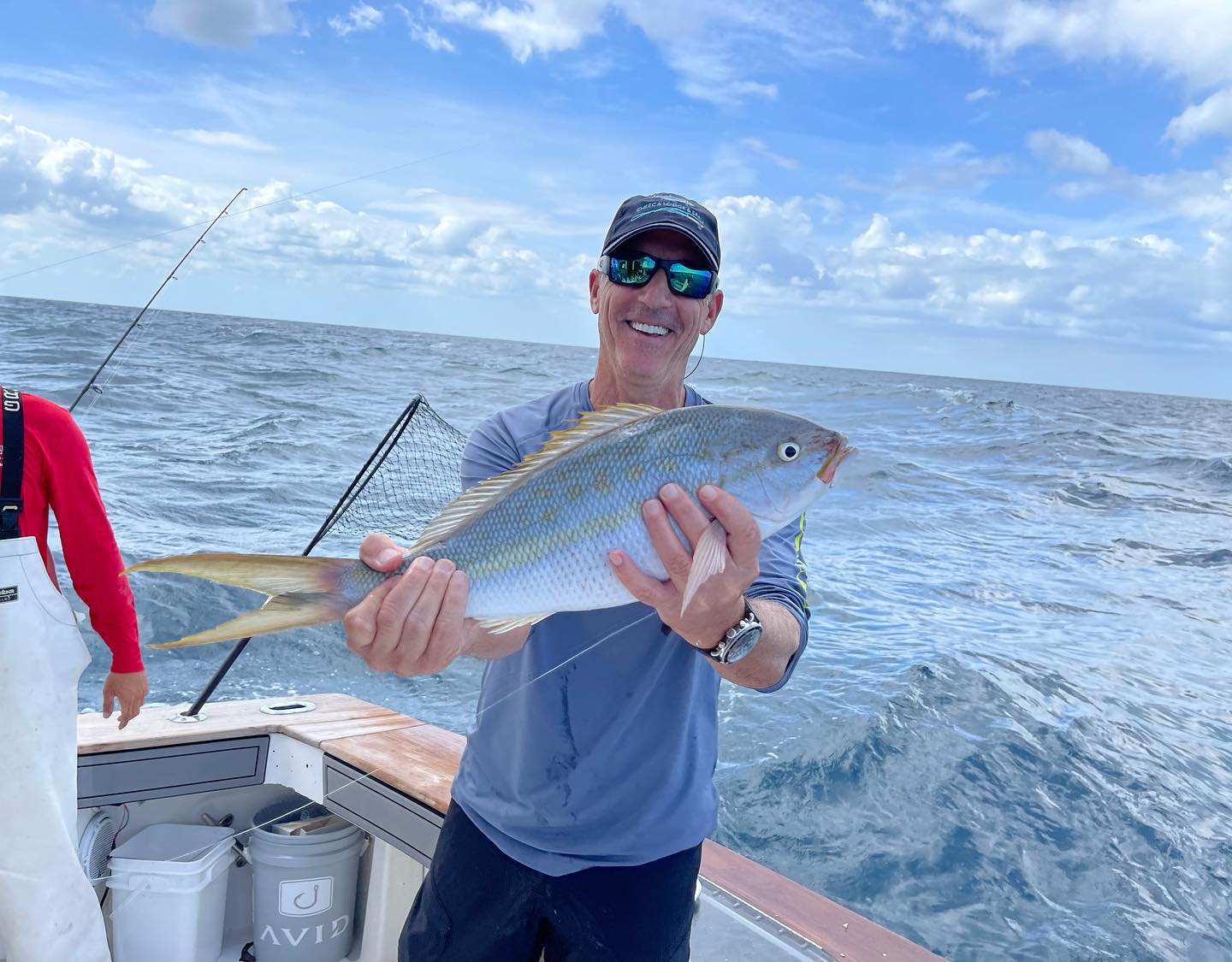 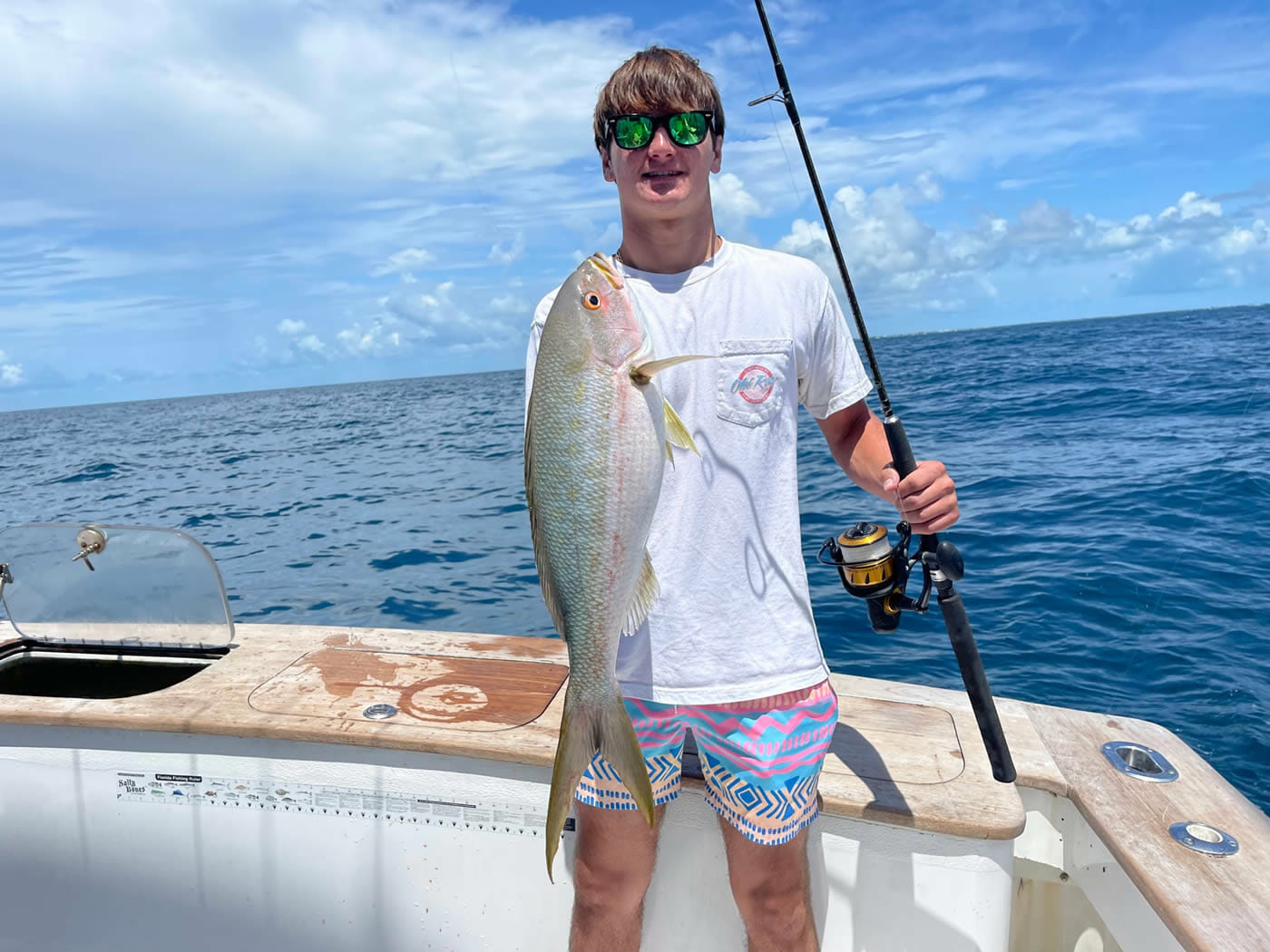 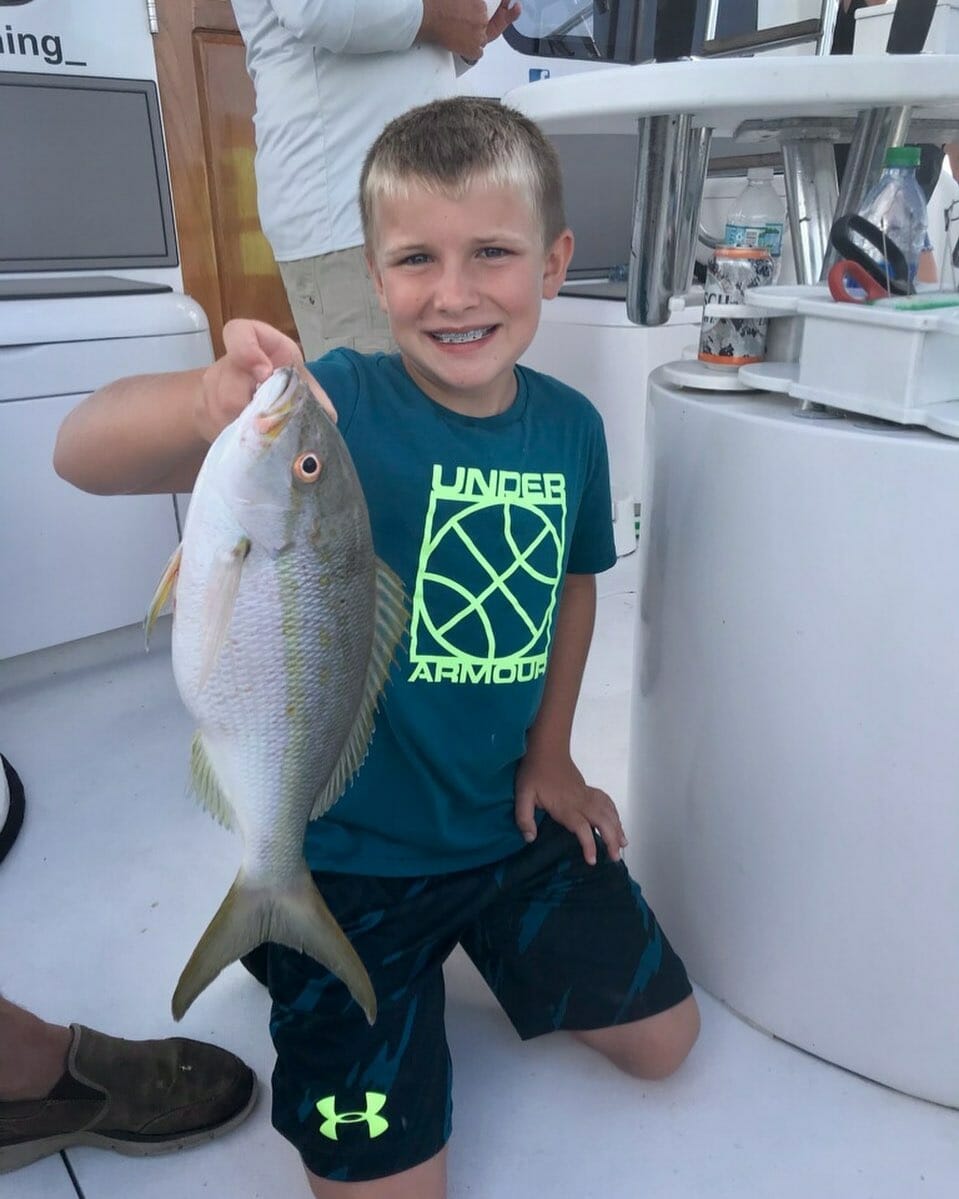 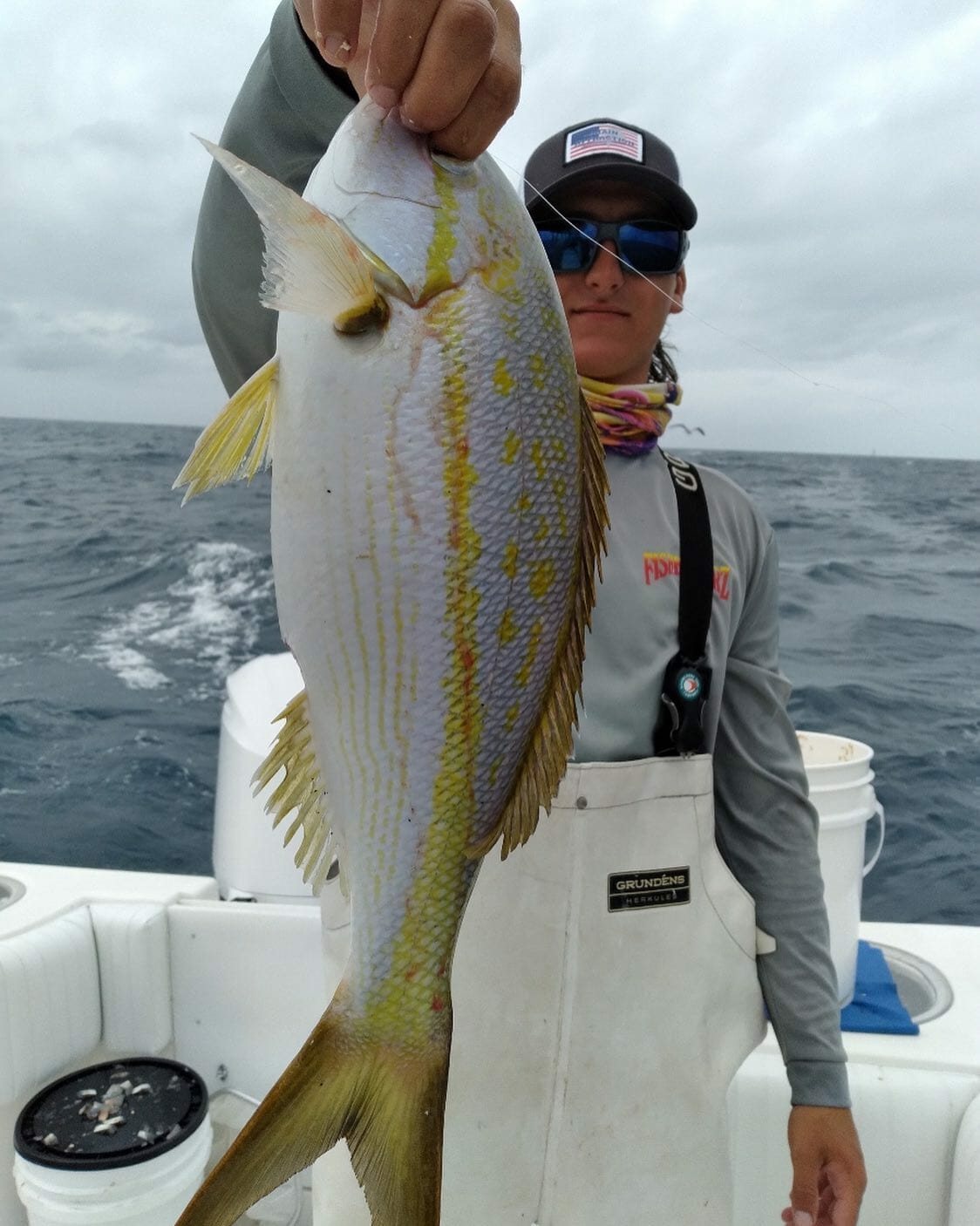