Since the Florida Keys were reopened June 1st it has been full speed ahead for the Main Attraction team. Seeing as the typically slow season hasn’t been all that slow, Main Attraction owners Marty and Katie Lewis decided to take a weekend off to get away as a family and reset. Katie, who handles social media and marketing for Main Attraction Charters, found a business named G3 Outfitters in Okeechobee, FL that offers all kinds of guided hunts (alligator, turkey, deer, etc).  Katie thought an alligator hunt could be a fun and exciting activity the family could participate in together. The outfitter had a tag/permit to harvest the reptile, and everyone participating in the activity purchased an Alligator trapping agent license at myfwc.com.

On October 17th the Lewis Family met Brad of G3 Outfitters at a local Okeechobee tackle store at 6:30 AM and followed him to a boat ramp to launch.  They headed out on the water just before daylight, as alligators tend to move once the sun comes up.  They had to get set up rather quickly as alligator hunting is only allowed between the hours of 5:00 pm and 10:00 am in the state of Florida.

Brad warned the wind was picking up and the hunting could be more challenging. Typically, alligators don’t swim around much if the wind picks up, because the waves can push water into their nostrils. This typically causes the gators to move to higher ground and rest instead.

That morning, the air had a slight chill as they ran down the lake in search of gators. Once the sun came up, Brad glassed the water with his binoculars and spotted several smaller alligators, ranging from 7 to 9’ long. Brad was convinced they could do better and kept looking. Shortly after, Brad found another body of water that was blocked by some trees, which settled the water.

Within 10 minutes, they spotted a 9-10’ gator and put two baits out. When you are alligator hunting, hooks are not allowed in the initial bait. You are allowed to use a wooden peg within the bait, and this morning they were using oven-ready chickens for bait. Chicken or beef lungs are commonly used as they float on the surface and attract hungry alligators. Within minutes they had the alligator’s attention and it began swimming towards the bait. 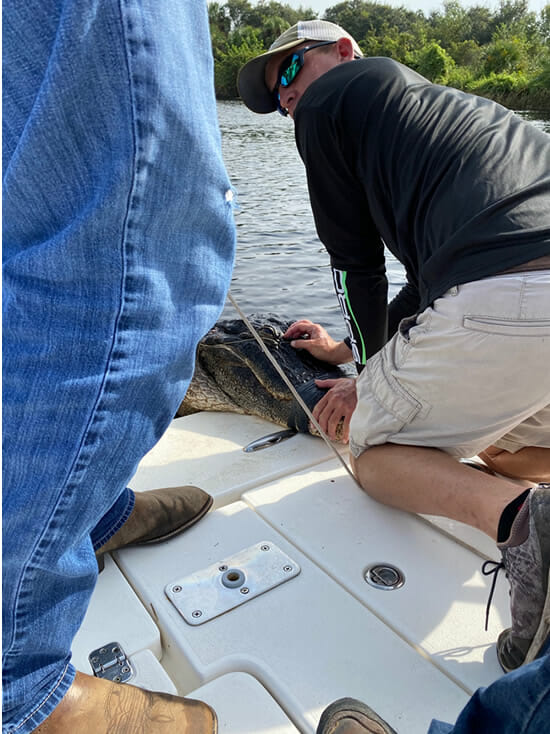 Every few minutes they would wind the line to get the slack out, and pop the chicken, much like a jig motion. Brad noticed this particular alligator acting very strange, and shortly after noticed it was because a much larger alligator was coming for the second bait. The Lewis family watched in amazement as both alligators popped their heads up at the same time and ate the oven-ready chickens whole! Just like that, they had an alligator double header! Brad put the boat in reverse and slowly headed towards the gators who then decided to swim in opposite directions. The drag on the smaller gator was set very loose so it could swim around while they focused on the large alligator first.

Keeping the drag light, Katie reeled up all the slack and got the alligator by the boat. At this point, you are allowed to use a harpoon or fishing pole with a weighted treble hook to hook the alligator. As soon as the treble hook hit the gator, he was mad and took off. Alex got on that second rod and fought the alligator for quite a while it seemed, never knowing how large it really was.

Katie was designated harpoon duty and told to drive the harpoon through the alligator’s tough skin. Easier said than done! When the alligator’s head popped up inches from the boat, Katie’s initial reaction was to step back, as this was the largest alligator she has ever seen and she has lived in Florida all her life. They eventually got another shot and got the harpoon in the large reptile, thanks to Brad!

After fighting the large beast for quite a while, it was time for the bang stick. Bang sticks are the only firearm you are allowed to use while hunting alligators. It’s a long stick, with a bullet on the end with a firing pin. As soon as the pin is removed, the bang stick is live, so safety is key. Once that bang stick hits anything, the firearm will go off.  As a smaller boat stopped to watch the action, Brad explained to Katie to hit the alligator behind the eyes and described a plate looking area to aim for under the water. 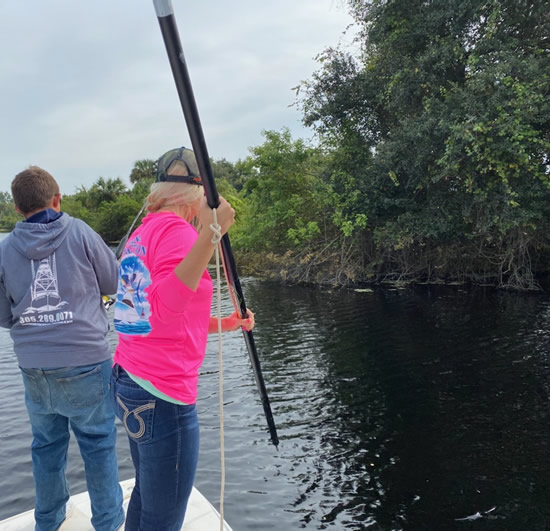 The large gator was reeled up closer to the boat as Katie waited for the perfect shot. Brad coached the entire time, telling her where to aim and when to go. Within seconds, the bang stick was deployed and the fight was over. They had just landed a monster! The Gator’s mouth was taped and brought onto the boat, an absolute giant! Everyone was worn out, as they all took turns fighting the reptile.  It was a team effort and an unforgettable family experience. 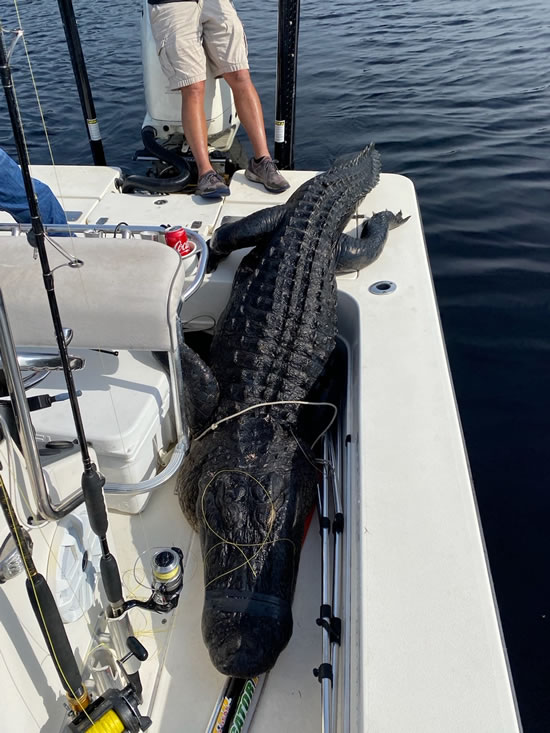 The large alligator was measured at a whopping 11 feet 9 inches long and Brad estimated its age anywhere from 50-70 years old. After some photos, the gator was taken to the processor and taxidermist.  The Lewis family ordered a full head mount to display in their home and now they have lots of alligator meat for future Main Attraction gatherings.  If you or anyone you know is interested in a full guided alligator hunt, Brad Gibson with G3 Outfitters is the way to go! We highly recommend his services and special thanks to his assistant Jeff who also did a great job.  G3 Outfitters in Okeechobee can be reached at (863)-634-0728. If you are looking to fish in the Florida Keys you can always reach us at (305)-289-0071 or visit our contact page. 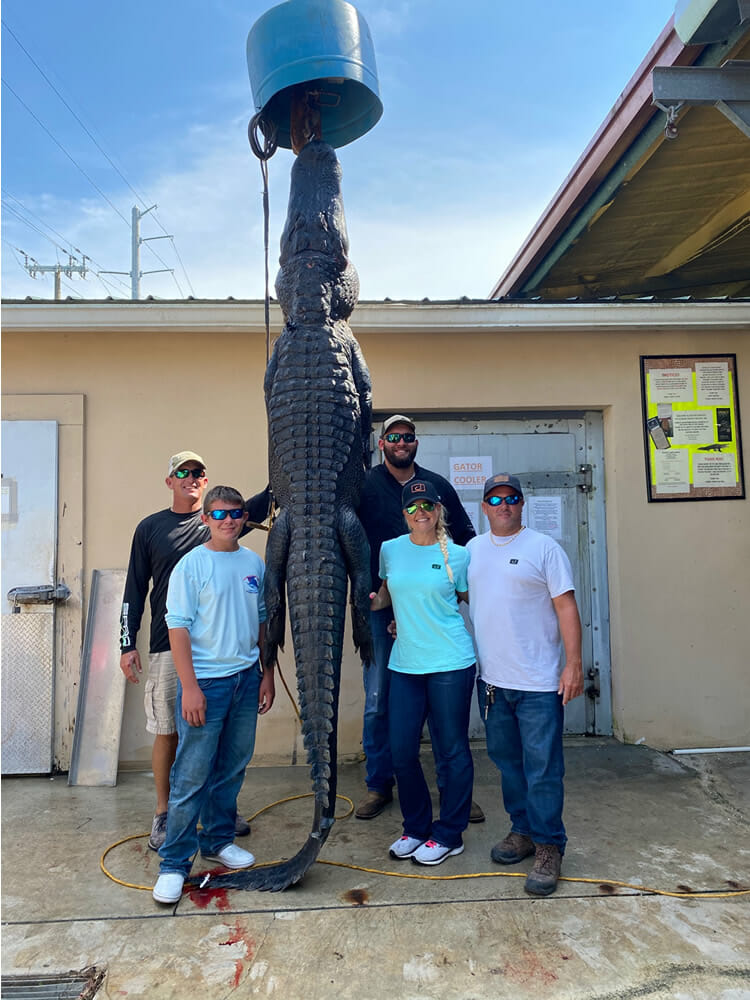 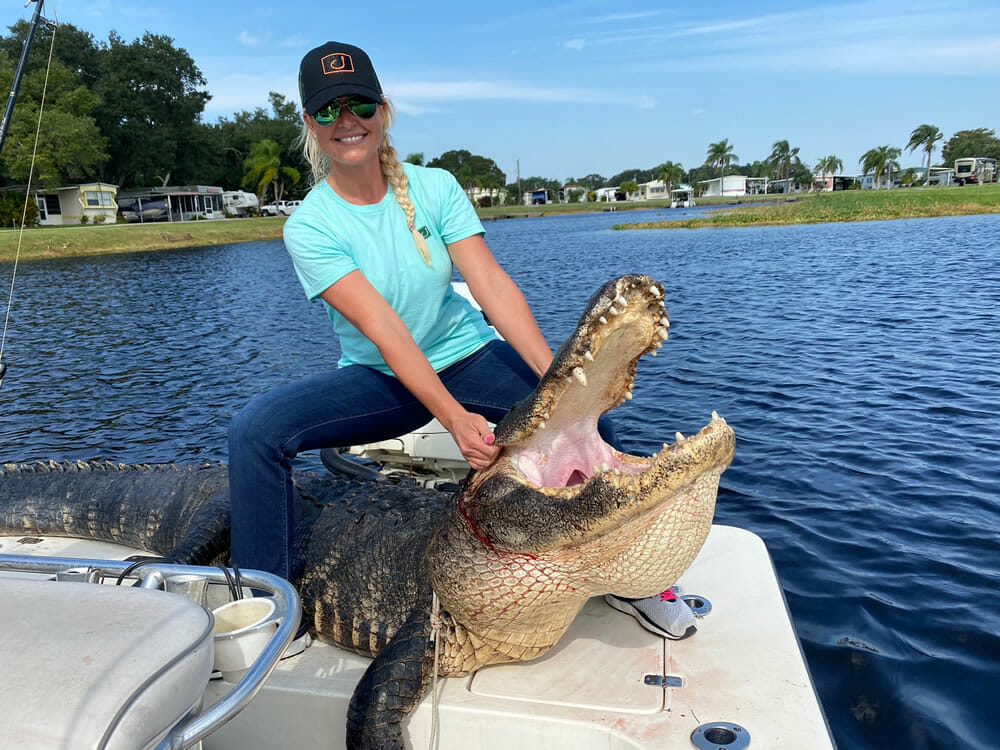 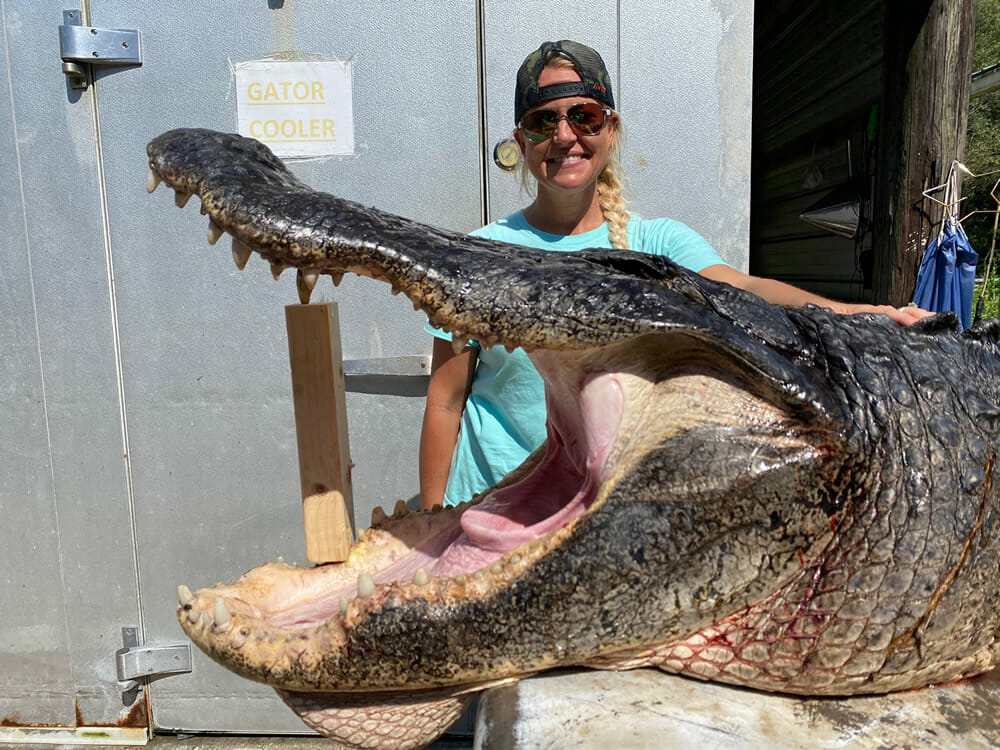