Seriola Dumerili, AJ, Reef Donkey, Rock Salmon, Yellow trevally, Jenny Lind. Whatever you call it, the Greater Amberjack is a special fish. It’s funny how iconic species of fish that have a significant impact on the lives of us humans seem to go by so many names. The Greater Amberjack is just that; it is the unsung hero of both the commercial and charter fishing industry.

Greater Amberjack is fished commercially throughout the South Atlantic and the Gulf of Mexico and is often served in restaurants. The species doesn’t get much credit; it is often served under other names or in generic dishes such as Fish N’ Chips or a Fish Sandwich. Chances are that if you ordered fish at a restaurant, you probably have eaten it at some point in your life.

Many sushi restaurants also serve Greater Amberjack under the name Yellowtail. This is technically incorrect; several types of Amberjack are used in sushi, Japanese, Yellowtail, Greater, and Almaco. They all look similar and are closely related, but they are all different fish species. Greater Amberjack is also often smoked to make fish dip, a popular dish in the Florida Keys.

Amberjacks are valuable to the charter industry as well because they are dependable. Amberjacks eat consistently year-round. In the Florida Keys, Amberjacks can be found on the wrecks at depths of 150-200+ feet of water. They can also be found among the natural structures hundreds of feet deep at the Marathon Hump. They are big fish reaching lengths of up to 6 feet and weights of a couple of hundred pounds.

They are also one of the most challenging fighting fish you can hook. They are notoriously stubborn, which is why they earned the moniker of reef donkey or sea donkey.

We often get clients that call in to request to catch “a BIG fish”. The greater Amberjack can save the day when other offshore species such as Sailfish or Mahi are not cooperating. 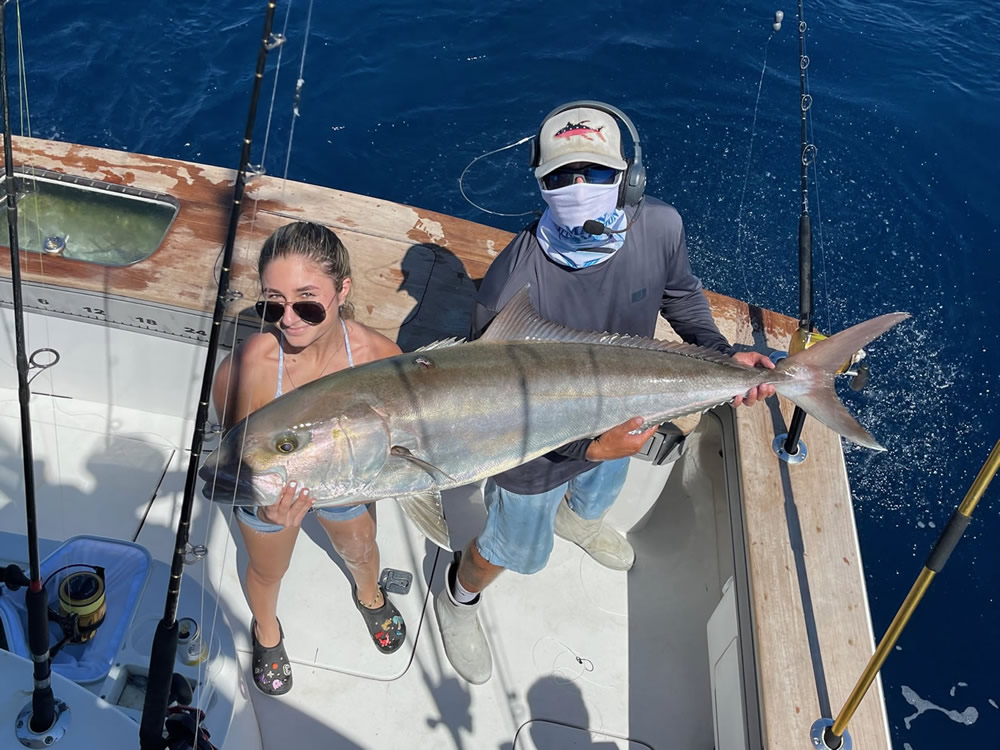 When it is tough to hook an Amberjack, it is usually not due to the lack of bite; they seem to eat all the time. Usually, all we have to do is drift some live bait right by the wreck. It can be challenging, however, to drift the baits when the winds blow hard, or the current is not cooperating.

There are also massive predatory Sharks that love to eat large Amberjacks while they fight an angler. Sometimes, there are so many bull sharks around weighing hundreds of pounds that it is impossible to get an Amberjack to the boat. Instead of a huge fish, we end up with just the head of the fish, and all we can do is try to guess how big it was and imagine the size of the massive predator that ate it.

In the fall and spring, our boats spend a lot of time on the reef catching different types of table fare, such as Yellowtail Snapper. Once the boat has enough to eat, our crews often pull the anchor and head to deeper water to drop on the wrecks.

Amberjacks are day makers and a pretty cool fish; however, there are not many known facts about the Amberjacks of the Florida Keys. For instance, we always just assumed it is always local Amberjacks hanging around our wrecks as they seem always to be there. But are they? Or are they just passing through?

This past May, Gray Taxidermy, the Fish & Wildlife Foundation of Florida, and Main Attraction joined forces to try and find out by deploying a satellite tag to further research on the Greater Amberjack. When you hear the name Gray Taxidermy, you may think of their beautiful replica fish mounts; however, they also have an entirely separate research and development division that runs an international fish tagging program https://grayfishtagresearch.org/ .

On May 25, 2022, Captain Marty Lewis went fishing with a team of Gray Fishtag Research representatives, including the head of the research department, Ms. Roxanne Willmer, and individuals from the grant organization and representatives of the Fish & Wildlife Foundation of Florida.

The weather was less than ideal, blowing 20-30 mph that day, so holding over a wreck would be highly challenging. Fortunately, they were with a very experienced Captain. After a few hours into the research mission, they had spaghetti-tagged a Mutton Snapper, Blackfin Tuna, and Yellowjack, yet still searching for the Amberjack.

The pressure was on for Captain Marty to produce an Amberjack, but he knew it would get done, it just might take a little longer than normal due to the weather. Captain Marty took the boat to another wreck, and shortly after the live bait reached the bottom, the rod bent over forcefully. Captain Marty knew this was the fish they were looking for!

Andrew Walker, the CEP and President of the Fish and Wildlife Foundation of Florida, was cranking on the fish, hoping it was greater Amberjack. After a heck of a fight, they opened the transom door and carefully brought the 50″ amberjack onboard.

The crew worked quickly to embed both the satellite and a spaghetti tag into the fish, and within less than a minute, they had the Amberjack back in the water and swimming away. Mission accomplished! 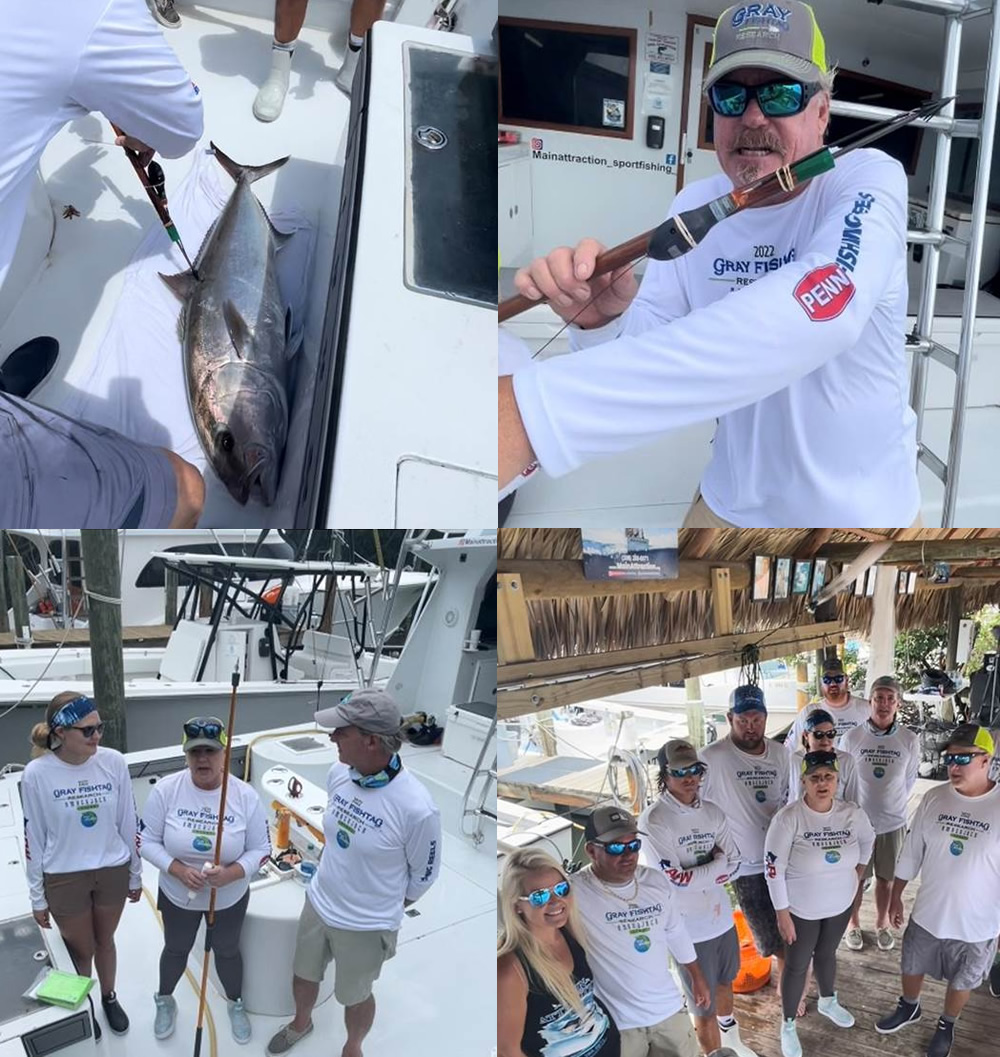 The satellite tag was deployed on May 25, 2022 and released prematurely on July 5, 2022. The tag transmitted it’s data to Argos satellite for 15 days.

We learned that the fish traveled further offshore than where originally tagged and remained in the Florida Keys. The average depth during the 6-week period was 83 meters (272 feet) and our fish never went shallower than 37 meters (121 feet) and it’s deepest depth was 159 meters (521 feet) 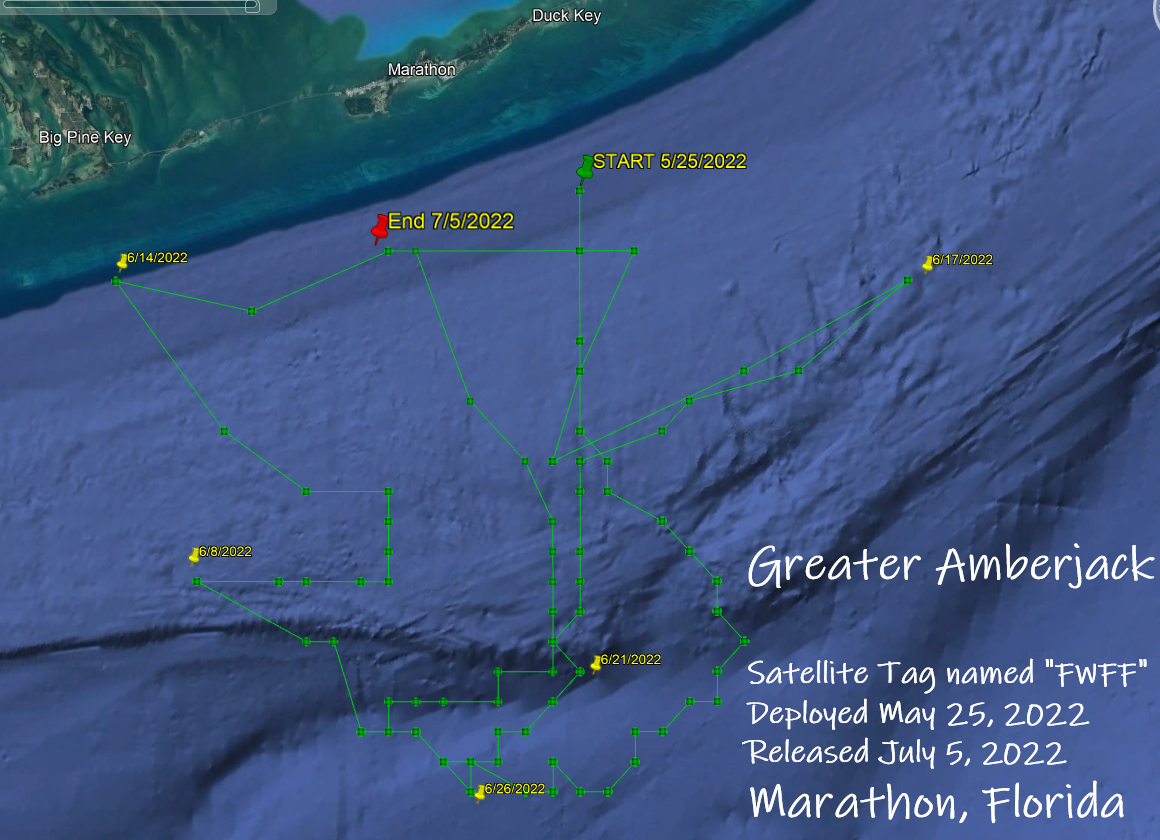 There is limited data collected on this popular gamefish and many believe that they are resident reef fish BUT our green tagging efforts are showing differently. See this recovery of “Dolph” who was tagged offshore Miami on April 4, 2022, and in 122 days was recaptured offshore Savannah, Georgia on August 4, 2022. 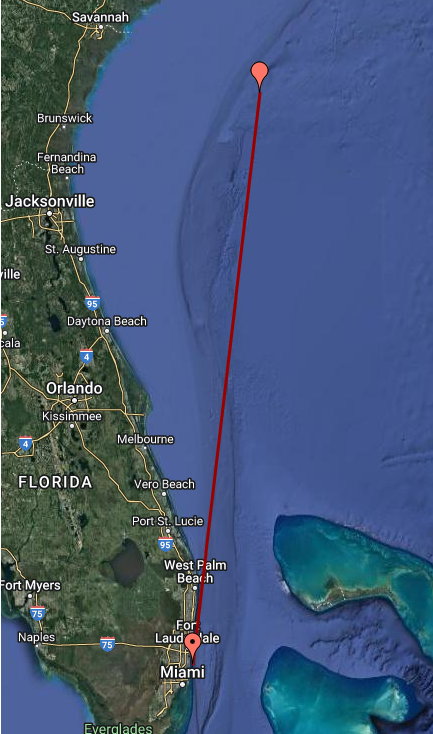 Thank you, Fish & Wildlife Foundation of Florida and Main Attraction Sportfishing Charters for supporting our Greater Amberjack research efforts. We look forward to collecting and sharing more data on this well sought-after species.

It was our honor to be involved with the program and we hope to participate on future projects. Below is an article published by the Key West Citizen newspaper highlighting the program and our fishing trip. That article is embedded below. If you have questions or wish to contact us to book a trip call us at (305) 289-0071.