The Reel Attraction is our 32’ center console which is one of our most versatile boats in the fleet. Typically, Captain Steve runs the Reel Attraction, but he had the day off and the boat wasn’t booked, so Captain Marty Lewis took his wife, young daughter, and his mate Lance, to fun fish inshore for a few hours.

The fishing had been kind of slow the previous few days, but there is an old saying “A bad day of fishing is better than a good day in the office”. So with that said, the group grabbed some drinks and sandwiches and prepped the Reel Attraction to go fishing. 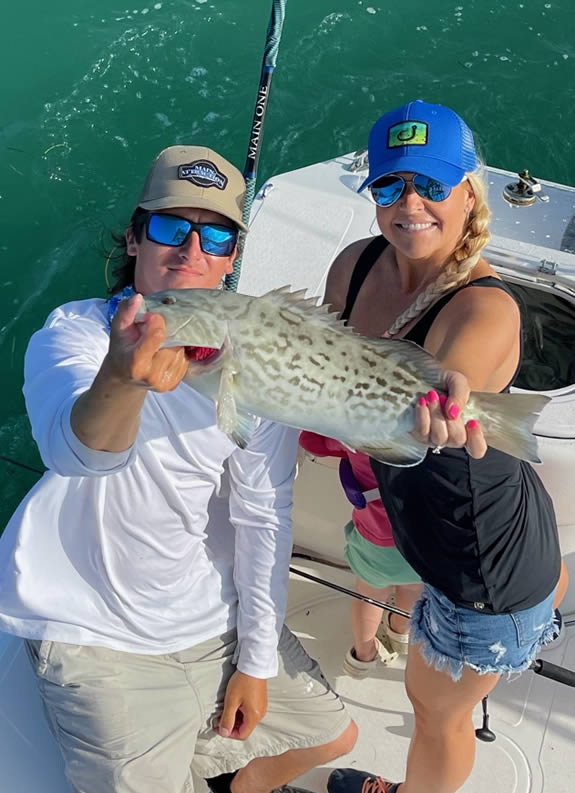 Katie and Lance with a Grouper.

That morning they wanted to try something different. A local Captain who’s a friend of the Lewis family had found a few wrecks, sunken trees, and other natural debris that had been submerged due to Hurricane Irma and other high winds events over the years. This created great structure for a wide variety of species of fish. He had mentioned the fishing there had been decent, so the Lewis’s figured it was worth checking out. They departed from Key Colony Beach Marina at around 8 am with hopes of catching something interesting. It was a little choppy but nothing out of the ordinary, just another beautiful morning in the Florida Keys.

When they arrived, it was clear they were in the right spot, as several other fellow charters were already there catching fish. They anchored up on some of the tree debris that their friend so graciously gave them the coordinates to. Within the first few minutes of being anchored, the bite was on and they began catching Mangrove Snapper, Lane Snapper, and African Pompano. African pompano is a very cool-looking fish with bright silvery skin and long rooster-like fins. They are delicious to eat, really fun to catch, and put up a heck of a fight. The Lewis family decided to keep two of the African pompano which is the legal limit, and made a delicious dinner with them later.

While trying another spot, the group picked away at some more large Mangrove Snapper and even got hooked up on a Cobia. Cobia is another really interesting fish to catch. They are very strong and pull extremely hard once hooked, they fight similar to a shark. The top of the Cobia fish has hard, sharp spines so if you ever encounter one, be careful. They also tend to roll when you gaff them, so when you stick them, make sure to hold on tight.

Once the team caught a dozen  various snappers, they decided to try the Pompano spot (Florida Pompano not African Pompano). This may sound crazy but all they needed to do was cast a naked (baitless) jighead into the murky water to get a bite. They pretty much hooked a fish on every cast. It was non-stop action and fun for everyone. 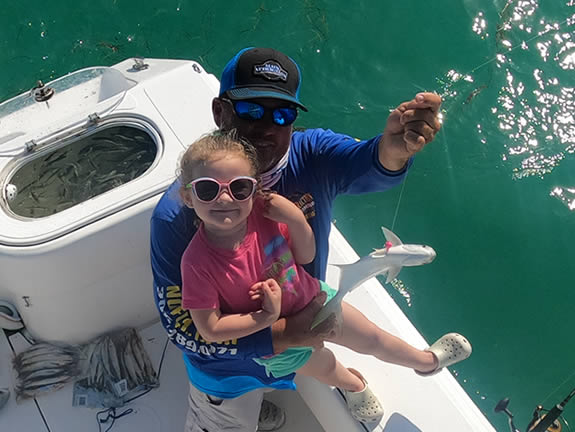 Natalie caught her very own Pompano!

Captain Marty and Katie took turns running the camera and fighting fish to show some of the different types of fishing the Main Attraction Fleet has to offer on our Youtube channel.

Even their 3-year-old daughter reeled in a few fish for the day, although she was mostly interested in playing in the live well with the pilchards! Later on, Katie caught another cobia, so they had quite a haul of fish to share with their team, friends, and family. 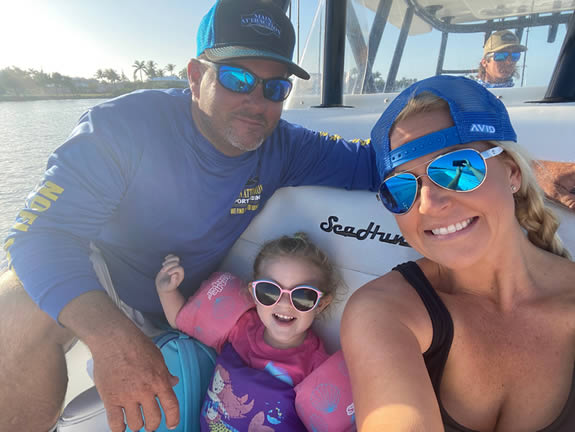 As we often say, if the Lewis’s aren’t charter fishing, they are typically out on the water fun fishing, because they love it so much.

At the Main Attraction, we all truly love what we do for a living and our passion for fishing translates to consistently successful fishing adventures with our clients.

If you wish to experience a day out on the water with our dedicated team of fishing professionals give us a call at (305)-289-0071 or visit our contact page. 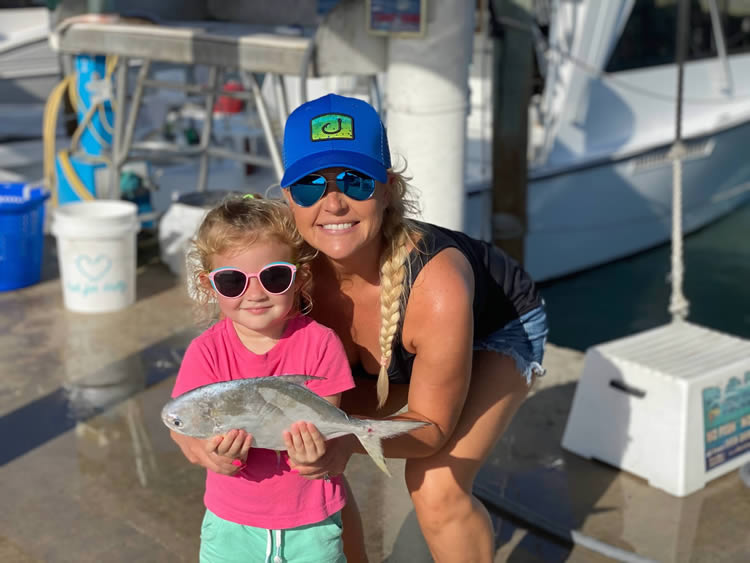 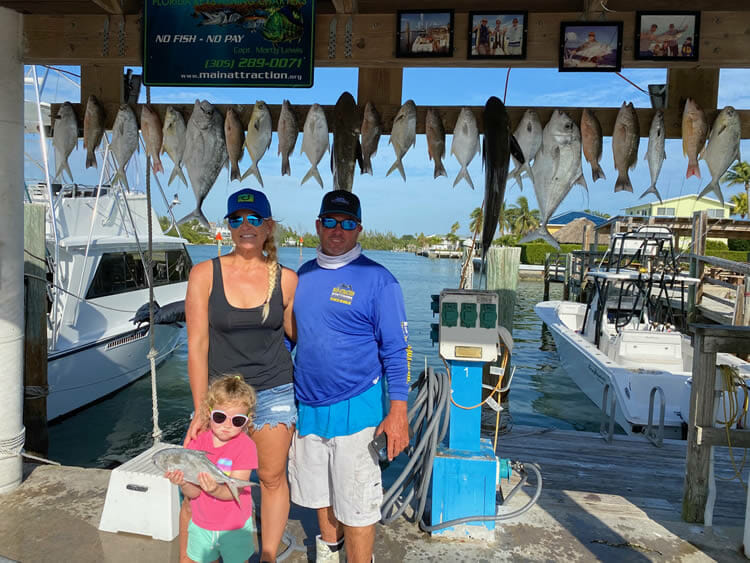 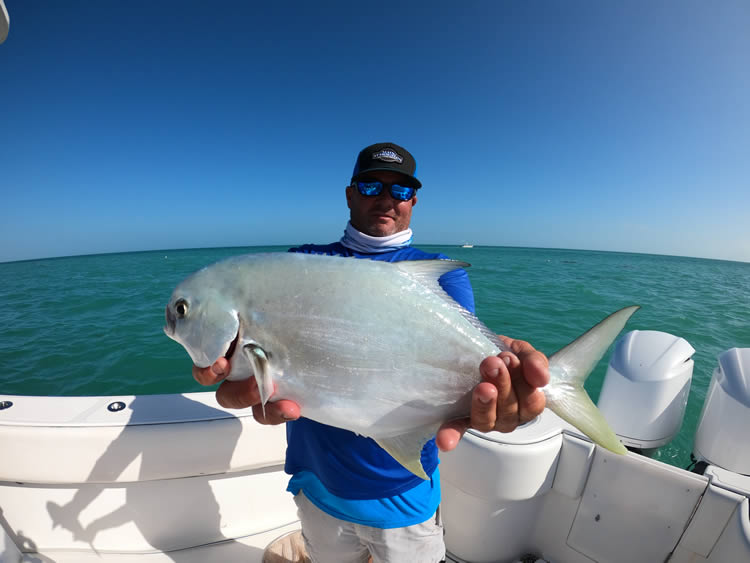 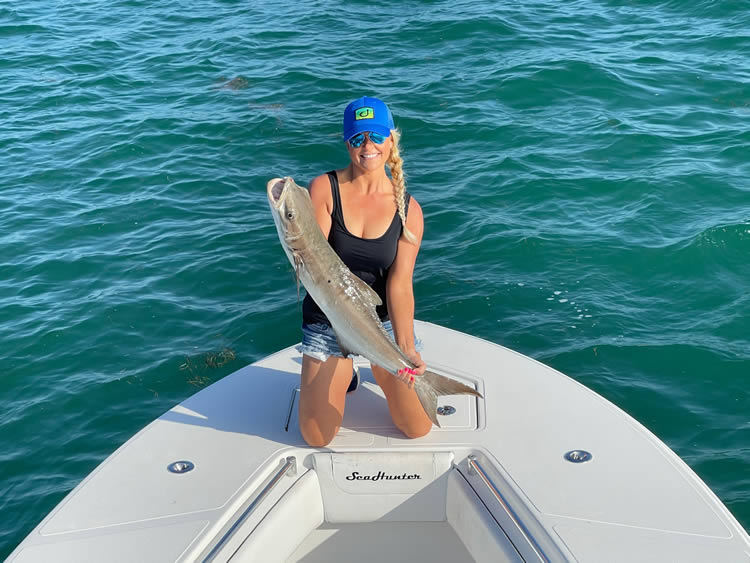 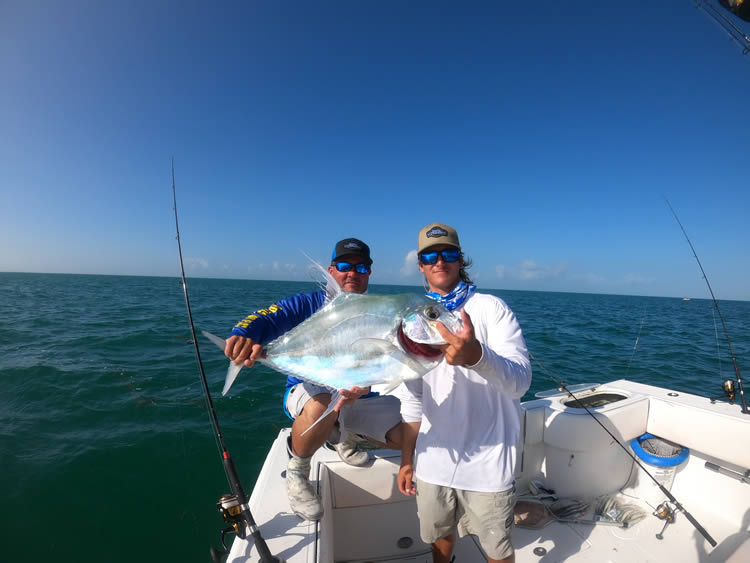 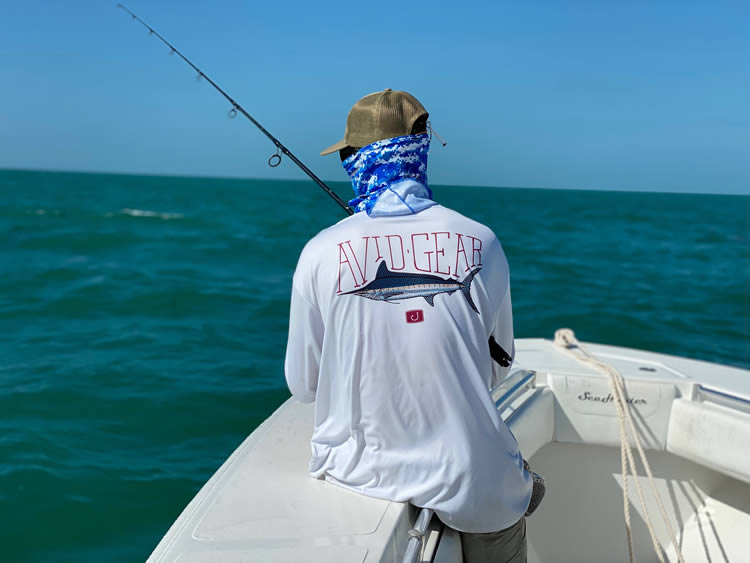