It is that time of the year again, Mini Lobster Season! For those who aren’t familiar with the recreational sport season, Mini lobster always takes place on the last Wednesday and Thursday of July. This is a two-day recreational sport season that allows everyday people to go out and catch their lobster limit before many thousands of commercial lobster traps go into the water.

Throughout Florida people are allowed to catch 12 lobsters per person, however, in Monroe County, only 6 lobsters are allowed per person. Either way, you must adhere to the legal-size limit and release any egg-bearing females you encounter.

Mini Lobster Season is a very fun time of year, and it draws a lot of people to our islands, which is typically a wonderful thing for the local economy. This year with the COVID-19 pandemic however, many locals had concerns about the increase of people flocking to the chain of islands. Fortunately, the majority of the increase of people was on the water catching spiny lobster and not so much in enclosed spaces and establishments.

In an effort to reduce day-trippers, Monroe County also closed boat ramps throughout the islands from Tuesday 07/28/20 throughout Thursday 07/30/20. Day trippers essentially drive down to get their lobster and then head back North the same day. While there is nothing wrong with doing that, it causes a considerable increase in traffic congestion which can be a safety concern.

Day tripping also does not have the same positive impact on the local economy as a tourist staying in the Keys would, so this additional influx of visitors throughout the islands was reduced by local authorities closing these boat ramps. 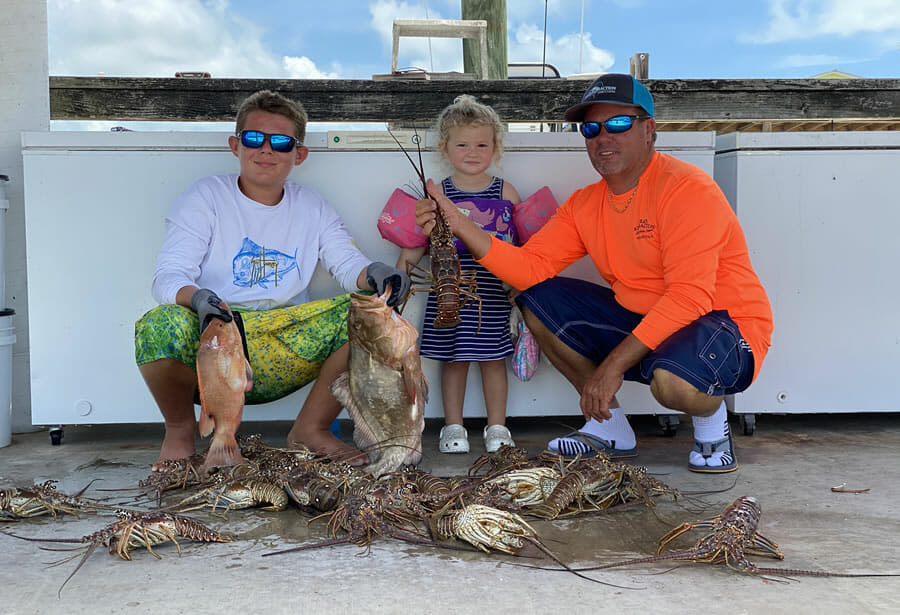 Captain Marty Lewis fishes with the Main Attraction team 7 days a week, but every year he takes the two-day sport season off to take his family lobstering. Day one of mini-season the alarm clocks went off at 5 am waking up the Lewis family. Their early morning began by loading the boat with gear and icing down the drinks and food. Once day broke, they decided to stay in Marathon waters and check a few spots they’ve discovered over the years. Unfortunately, the previous few days had been very windy and it was quite difficult to see in the choppy, murky water. Some of the spots they were checking were as deep as 20 feet, making visibility a challenge. Although they were not finding lobster as they had hoped, Captain Marty shot a nice Hogfish and his son Alex speared a big beautiful Red Grouper. Both delicious fish to eat! 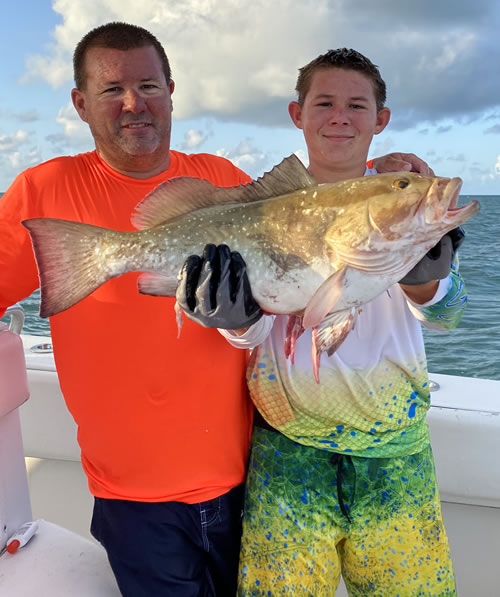 The Lewis family decided to head south and try some other spots. Marty and Alex strapped on their dive tanks after they anchored the boat. Katie waited at the helm so she could throw the anchor buoy and position the boat for pickup, once Marty and Alex popped up from their dive. While she was waiting, a small Boston Whaler in the vicinity began taking on water. The owner of the Whaler was holding onto the bow of the vessel trying to get the water out. Just as Katie took notice of this, Marty and Alex popped up from their dive. Katie released the buoy and picked up her divers and headed toward the Whaler to help out. While she was picking up the boys, another boat approached the Boston Whaler to help as well. The Captain decided to get his vessel on plane to see if it would push the water out. This appeared to work and he went on his way.

Captain Marty got into a conversation with the several older gentlemen aboard the other aiding vessel. At one point they asked Marty if they had caught their limit yet. Marty explained that they had not but had plenty more holes to check. To Marty’s surprise, the older gentlemen offered him some of their lobster to get them started! Marty and the family graciously accepted the kind offer.

The truth is many locals dread mini-season not only because of the traffic congestion and sometimes reckless amateurs driving boats on the water but also because sometimes visitors simply go lobster crazy! Most locals in the Keys have either witnessed or at least heard stories of rude or greedy behavior from visitors regarding lobster during the miniseason. This kind, unselfish act, was a great reminder there are some wonderful people in our world, and not to let a few lousy people make us jaded about such a fun event. Since our world has been turned upside down with COVID-19, activities like this are a safe and effective stress release. Being out on the water breathing in the fresh sea air without a care in the world is such a great way to get away from it all!

The Lewis family moved to some more spots south and managed to catch their limit of lobster for the day. They were back by 1 pm, cleaned up for the day, took pics, and a nice relaxing break. That night the Lewis family ate like kings! They ate Red Grouper, Hogfish, and Lobster for dinner. 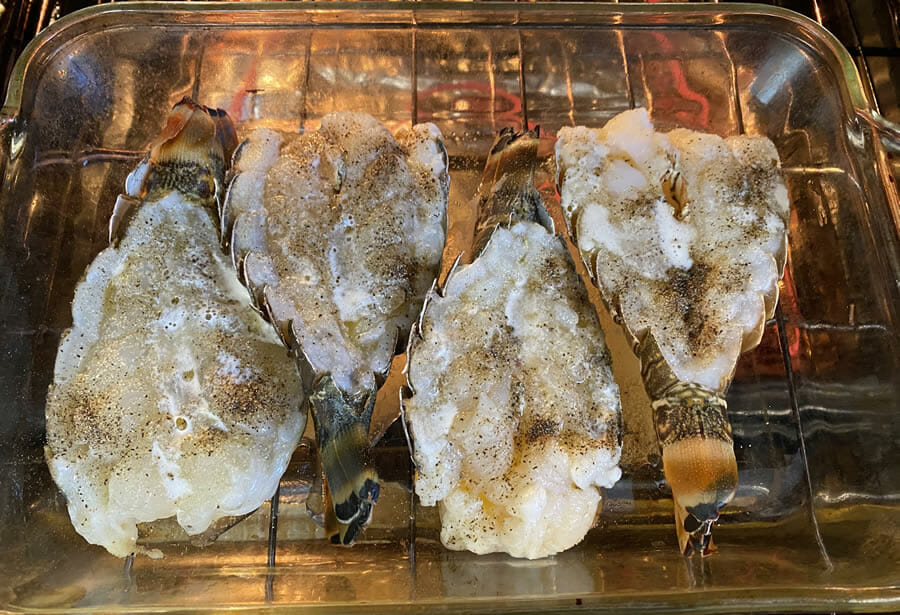 For day two of mini-season, the Lewis family left the dock by 6 am and headed to their spots to start the lobster hunting process all over again. The Lewis family was tired from the day before, but still eager to catch more lobster. The weather couldn’t have been more beautiful, although it was still windy. Day two of Mini is always more challenging, as the lobster areas have been picked over and are harder to find.

The larger rocks that hold multiple lobsters are often vacant on the second day of mini-season. So, the Lewis family focused on looking for small holes that just hold one lobster at a time. It is more work this way but the results can be quite good. Within 30 minutes of jumping in the water, they caught 6 legal lobsters using this technique! 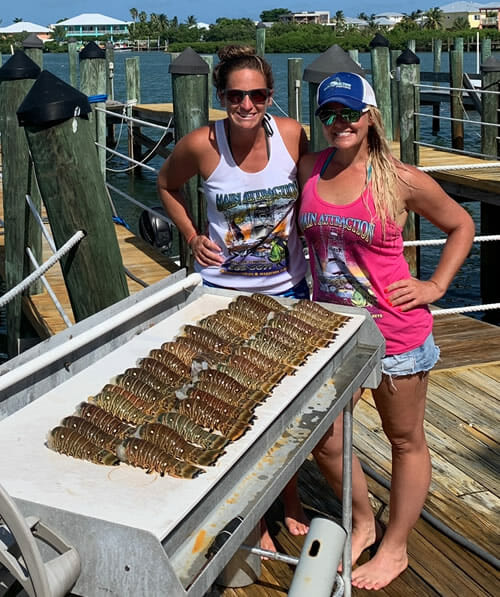 Captain Marty and Alex with their dive tanks, and Katie using the free dive technique, by mid-afternoon, had their limit of lobster and were ready for a well-deserved nap! Two days of successful lobstering hunting were in the books and lifetime family memories were made! If you have never experienced the fun of catching your lobster, and the satisfaction of eating that lobster for dinner, we highly recommend you come to visit the Florida Keys next mini-season. 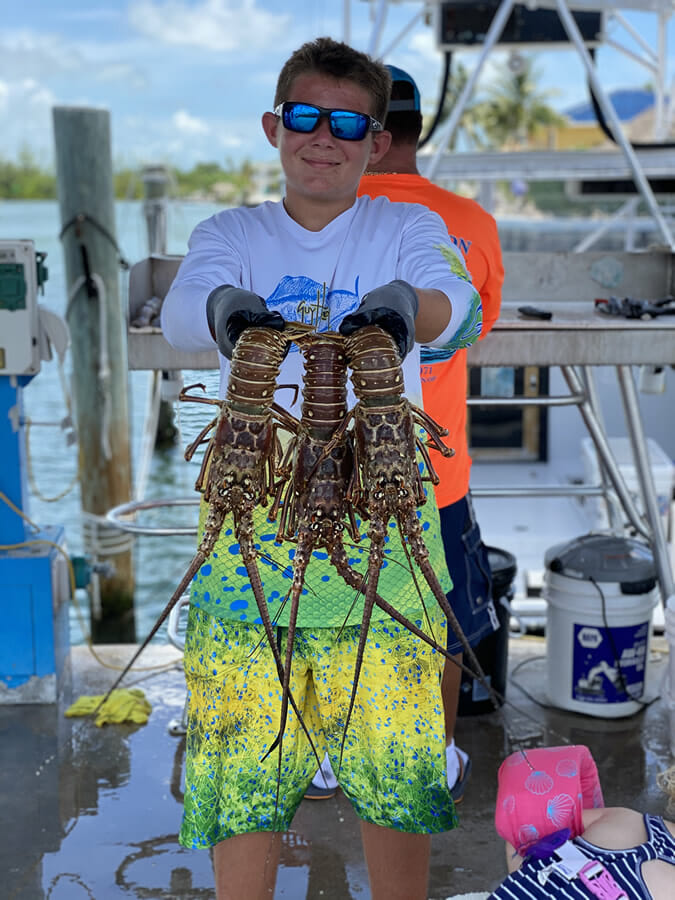 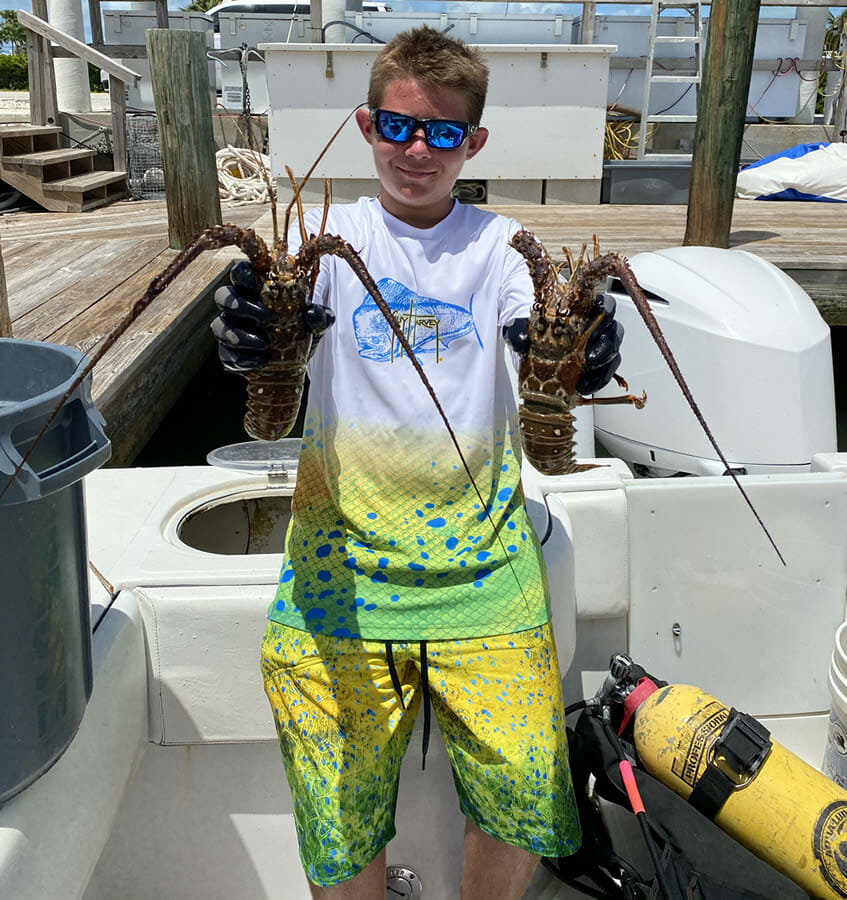 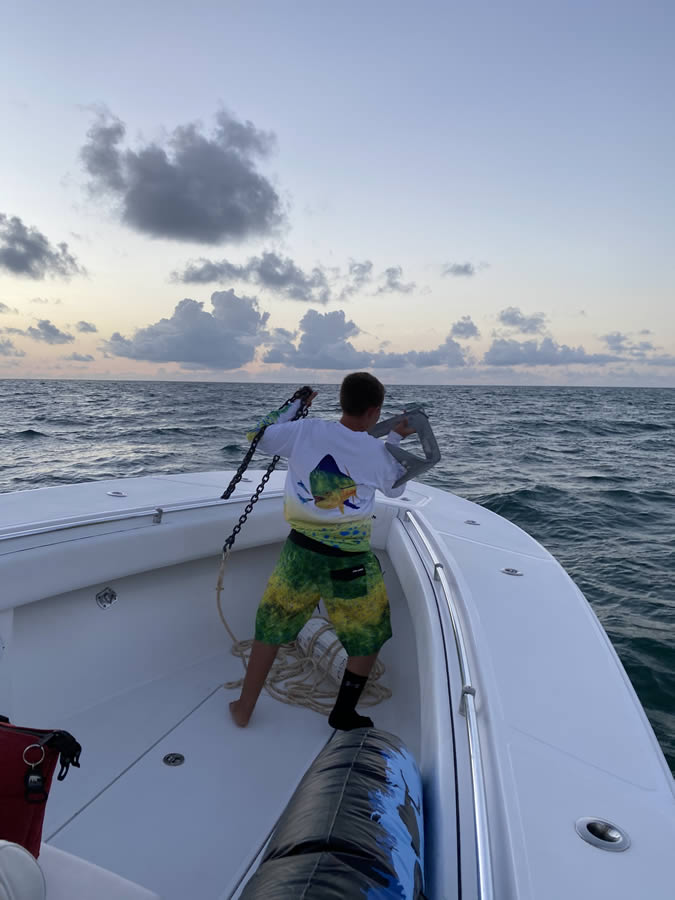 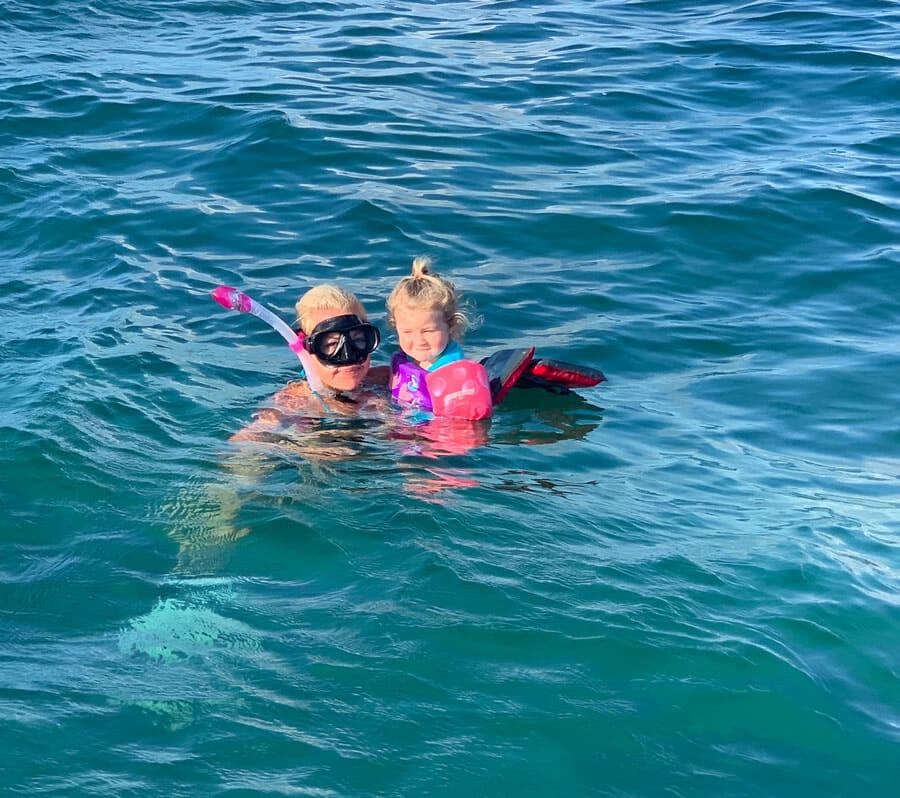 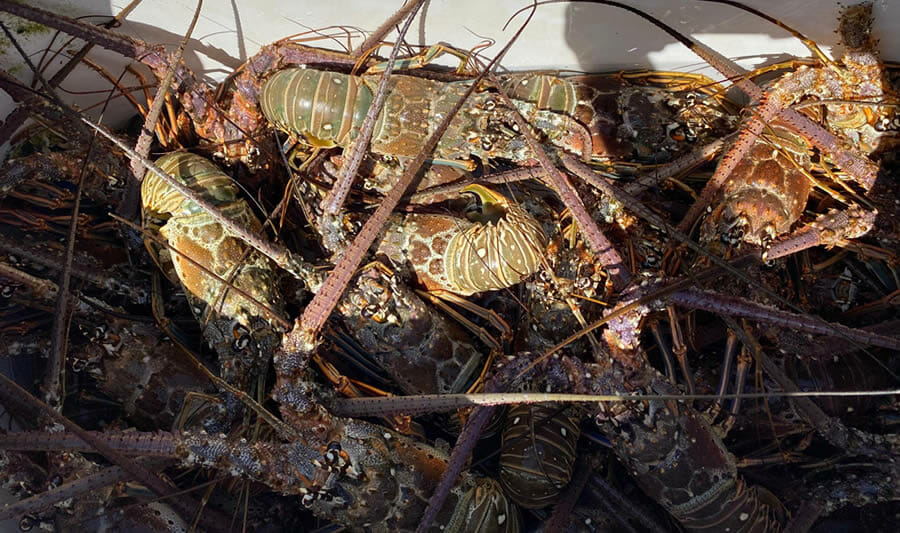 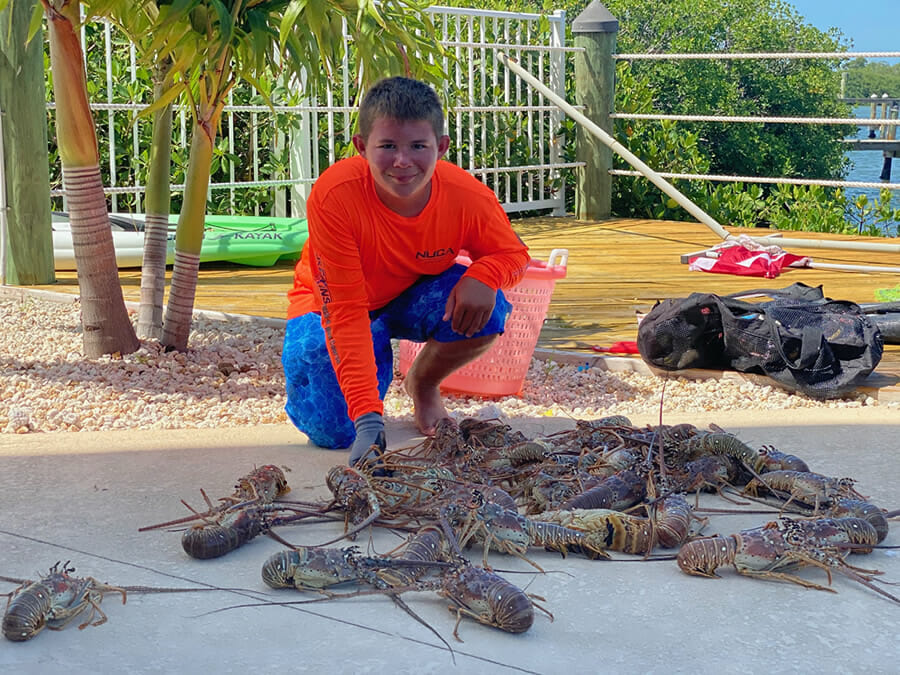