Living in the Florida Keys gives you more than beautiful views and great fishing. You also get to develop small-town relationships with the locals, especially if you have lived here for many years. Captain Marty Lewis, now in his early 40s, has lived in the Keys since he was a teenager.

Throughout the years, Marty has developed solid relationships with other locals, such as Ms. Donna Hart. Donna caught her first Sailfish many years ago with Captain Marty. Due to volunteering her time at local fishing tournaments, Ms. Hart is known by numerous fishing professionals and anglers.

Donna is also the manager at the Lower Keys Tackle Center in Big Pine Key. Despite Ms. Hart’s busy schedule, she has a heart of gold and makes time for her friends and loved ones. Donna recently started caring for her grandson, Tripp, full time. When Mrs. Hart comes home from her full-time job at the tackle shop, she makes time to help Tripp with his homework and does her best to keep him healthy and active. Tripp loves to fish, a great way to get out in the sun and exercise while having fun. 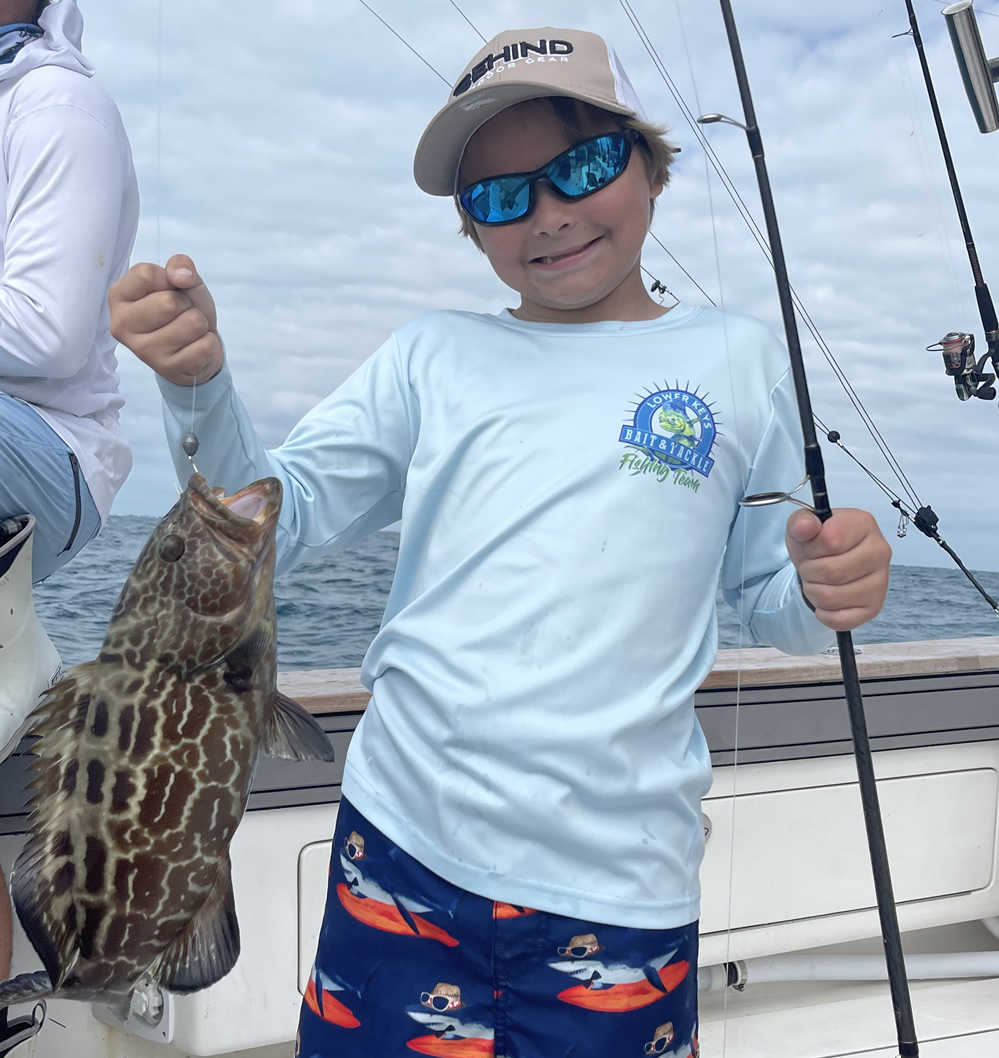 Every year in the first week of December, there is a lull in bookings right before the mad rush of the Christmas and New Years’ holiday week. This past December 2021, Katie reached out to Ms. Donna and asked if they would like to go fishing with our crew free of charge while the calendar was still quiet. They gladly accepted Katie’s offer and picked a Saturday so as not to conflict with Tripp’s Elementary school schedule.

The Hart family showed up beaming with excitement in anticipation of what the Atlantic ocean might hold for them that day. Captain Marty suggested starting offshore as the conditions looked fair for Sailfish. In typical Captain Marty fashion, it wasn’t long before the Captain had spotted a sailfish and was calling for a pitch bait. Tripp looked on with amazement as he watched a friend of the Hart family fight his very first Sailfish. Once they caught and released the Sailfish, Marty was on the hunt for another Sailfish so Tripp could catch his first Sailfish next.

Unfortunately, overcast skies moved in, reducing visibility and the chances of successfully sight fishing for Sailfish. Captain Marty decided to anchor up on the reef instead so the Hart family could get some action and filets for dinner.

While on the reef, the Hart family caught various species, some being Tripp’s very first. They caught Mangrove Snapper, Mutton Snapper, and even a Black Grouper. Once the clouds moved on, the sun returned, and Captain Marty was ready to look for Tripp’s first Sailfish. 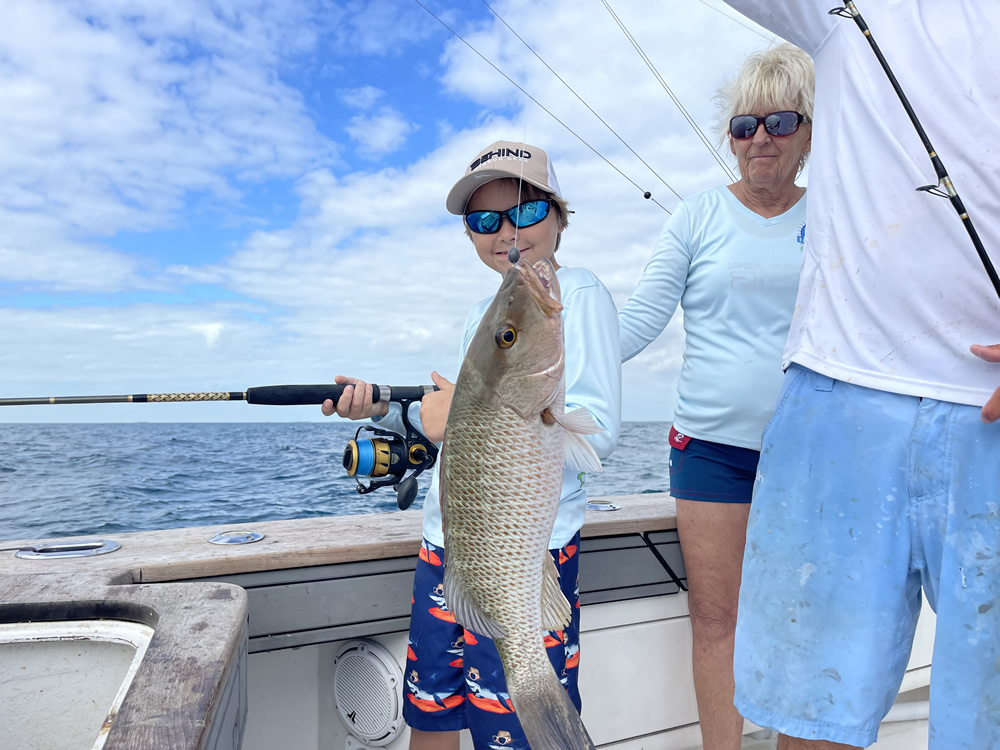 After pulling anchor, Captain Marty headed offshore using his tall tower to spot the outline of a sailfish in the water that he describes as looking like a long dark log or a black trash bag. Captain Marty also looked for frigate birds and bait showers.

What is a bait shower?

When Sailfish are preying on a school of bait, they work together to get the small fish balled up in a tight school out of fear. At this point, Sailfish swim through the baitball, batting their long bills back and forth to stun the bait, making them easy targets to eat. When a Sailfish gets close to a school that has no escape, the fish will often jump out of the water in a desperate attempt to get away. A large school of bait jumping out of the water nearly in unison creates a spray effect that looks like water coming out of a showerhead. Seeing the baits shower firsthand is fantastic and often means a Sailfish is nearby.

The Sailfish read the script perfectly and gobbled the bait right away. Once the line was tight Tripp took over to do battle with the fish. Tripp was winding as fast as he could, and his grandmother Donna, assisted whenever he would get tired. It was a magical moment as Tripp fought his first Sailfish, with his family there to witness it.

Once the fish was safely caught and released Tripp was worn out but ecstatic. It gave Donna great joy to see her grandson as happy as she was when she caught her first Sailfish with Captain Marty.

Later that afternoon, when they returned to the dock, the crew filleted the Snapper while Tripp told his fish story with excitement. He was one proud kiddo, and he had good reason to be, be he did a great job! 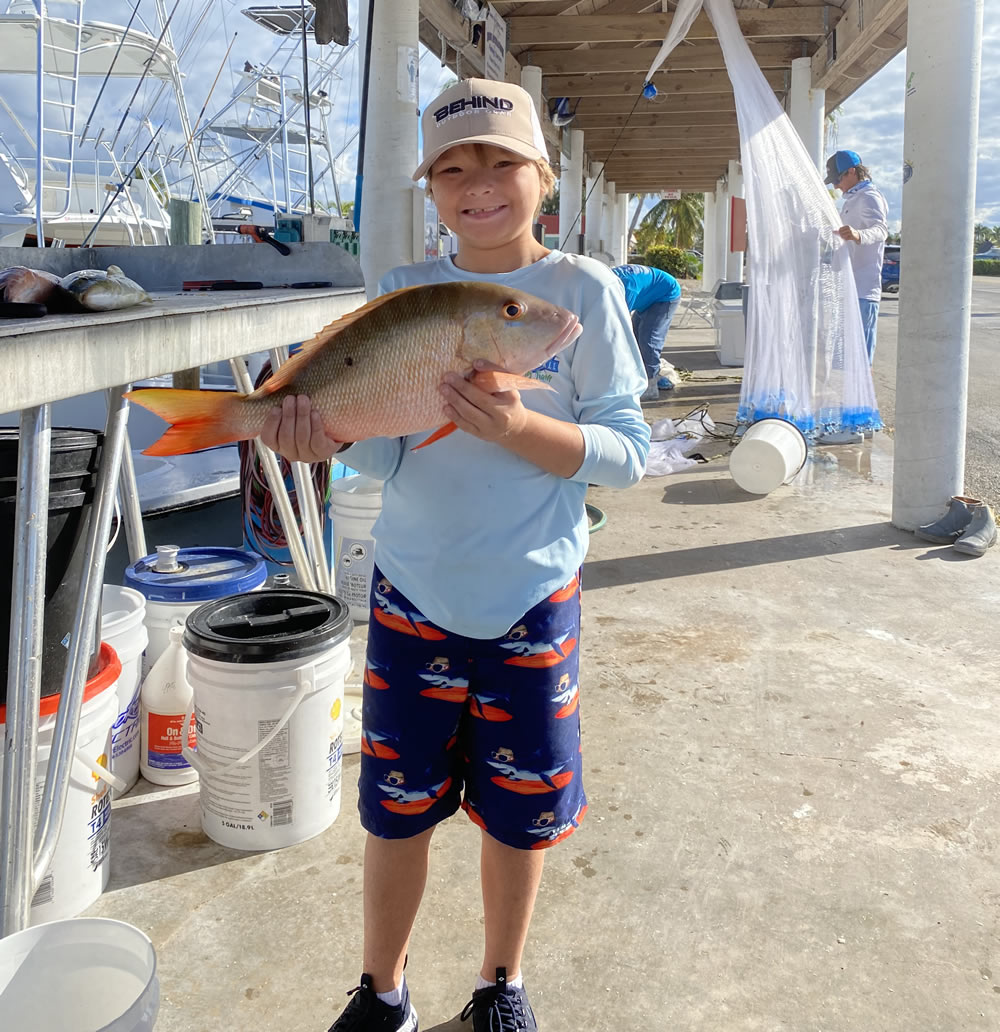 About a week later, Tripp was invited to be on the local radio to give a weekly fishing report with Ms. Donna. Tripp shared his experience fishing with the Main Attraction and how he caught snappers on the reef and landed his first ever Sailfish with Captain Marty!

Donna gave Katie a heads up that he would be on the show that night, so Katie tuned in and recorded it on her phone.

This is what Katie heard:

This is what Katie heard:

About a week later Katie was chatting with our local Gray Taxidermy rep, Lee Kerbel. Katie told Lee about Tripp and Lee was moved by the story and decided to to make even more magic happen for Tripp! Gray Taxidermy produced a life-sized 6ft long fiberglass replica mount of Tripp’s Sailfish to hang on his wall, so he would surely never forget his first Sailfish. 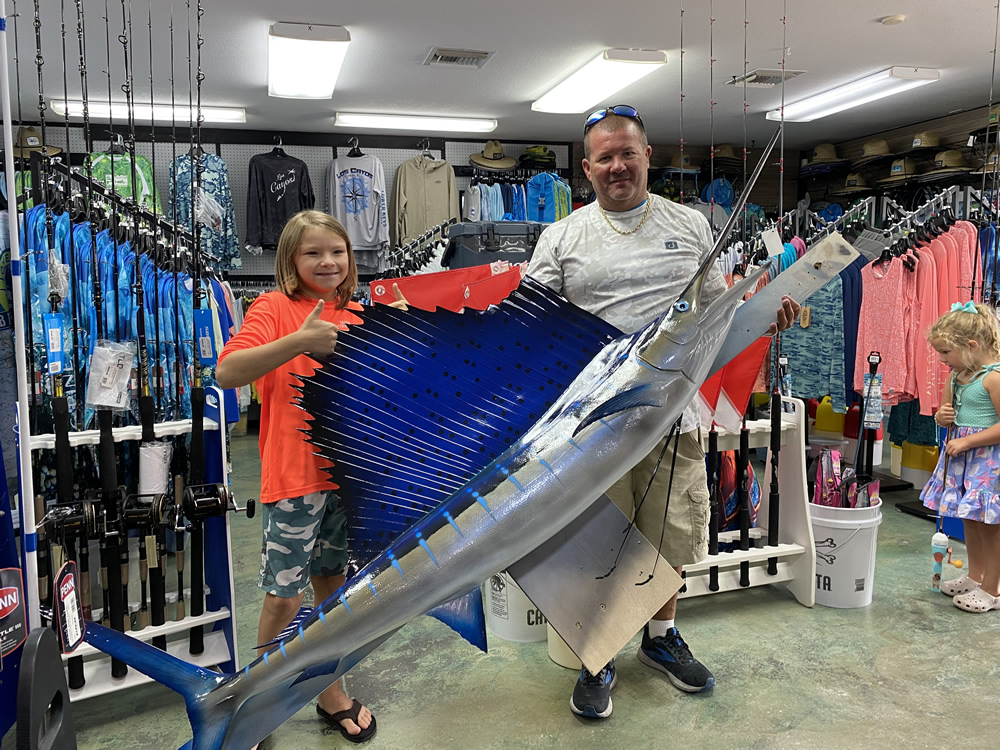 This very morning Captain Marty and Katie showed up at the Lower Keys Tackle Center to surprise Tripp with his Sailfish mount. Tripp was shocked by the mount, and once it sank in that it was actually for him, he was thrilled and very thankful! Donna was also very grateful and gave Katie and Marty a big hug.

If you want to make some great memories on the water, give us a ring at 305-289-0071 or visit our contact page, and make some dreams come true!