With 2021 in full swing it is time to introduce you all to our 2021 crew! In this multi-part series over the next few weeks, we will introduce you to our new crew members, and provide updates on our returning Captains as well as the owners of Main Attraction.

Captain Steve Fitzgerald is a one-man show, most of the time, running Reel Attraction, our 32’ center console vessel by himself. The Reel Attraction is our most versatile boat, as it can fish reef, wreck, offshore, bayside, and Tarpon trips. Occasionally, Captain Steve will also run Main Attraction 2 if one of our other Captains needs a day off. Steve has been fishing with the Main Attraction team for over two years now. We call him the Grouper Master because he has great honey holes for catching them and methodically works toward perfecting his Grouper catching techniques every season. Needless to say, Captain Steve is the guy to go fishing with on May 1st, when the grouper season reopens.

Captain Steve is also very consistent when it comes to catching Yellowtail Snapper, Mangrove Snapper, Mutton Snapper, Amberjack, and in the summertime, he slays the Mahi! In Spring and Summer, Captain Steve also runs the majority of our Tarpon trips, fishing the bridges and shorelines. Captain Steve is not only a great fisherman but also very laid back and enjoys being out on the water as much as possible.
In Captain Steve’s off time, he is a Jiu-Jitsu martial arts specialist and enjoys staying physically fit. He is also an animal lover and has several dogs of his own. Before living in the Florida Keys, he lived in Costa Rica and fished charters over there. In our off-season, he takes a two-week vacation to go visit most of his family in New York and indulges in their wonderful pizza. 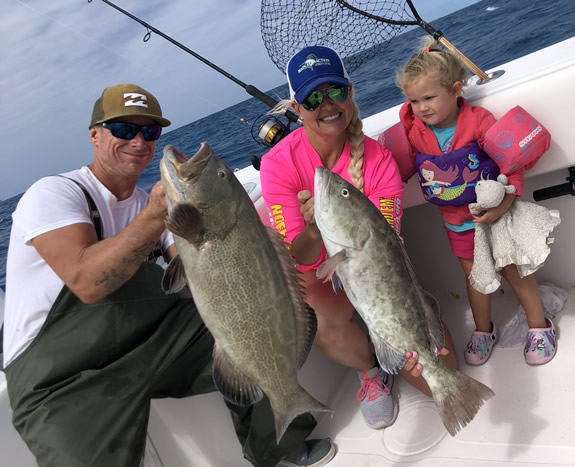 If you have fished with the Main Attraction Sportfishing crew over the last 5+ years, you may have had the pleasure to fish with Captain Aaron or Captain Nautical as we nicknamed him. Aaron is a hoot, to say the least. He is one of our most versatile Captains, besides Captain Marty, and can run any boat in the fleet, whether it be a single screw, double screw, or outboard motors. Captain Aaron currently runs our 42’ foot Morgan, Main Attraction 2, along with his Mate Cole DeLeon.

The Florida Keys being shut down for over three months last year was hard on everyone down here and it took its toll. During the shutdown, Captain Aaron had a great opportunity to go to Seward, Alaska, and make some good money fishing commercially, so he left for a few months until the Keys reopened. While in Alaska, Aaron primarily caught King Salmon, Silver Salmon, and Rockfish.

Rockfish look similar to largemouth bass, but there are different varieties such as Black, Yelloweye, China, and Dusky. Captain Aaron explained to fish for Salmon or Rockfish, you use a 3 oz lead, short leader, squid skirt, and a chunk of Herring. While in Alaska, Aaron’s charters were very scenic, as he would often see Bald Eagles, Humpback Whales, Orcas, and Puffins.

Captain Aaron with a King Salmon he caught in Alaska.

Captain Aaron is our good luck charm, as we joke often with him. One of the biggest Swordfish Captain Marty Lewis has caught to date, Captain Aaron was with him and helped harpoon the sword when it breached. That Swordfish is now a beautiful mount on Captain Marty’s wall and a lasting memory.

If you wish to fish the Florida Keys with one of our excellent crew members to make some lasting memories of your own, give us a call at 305-289-0071 or visit our contact page. 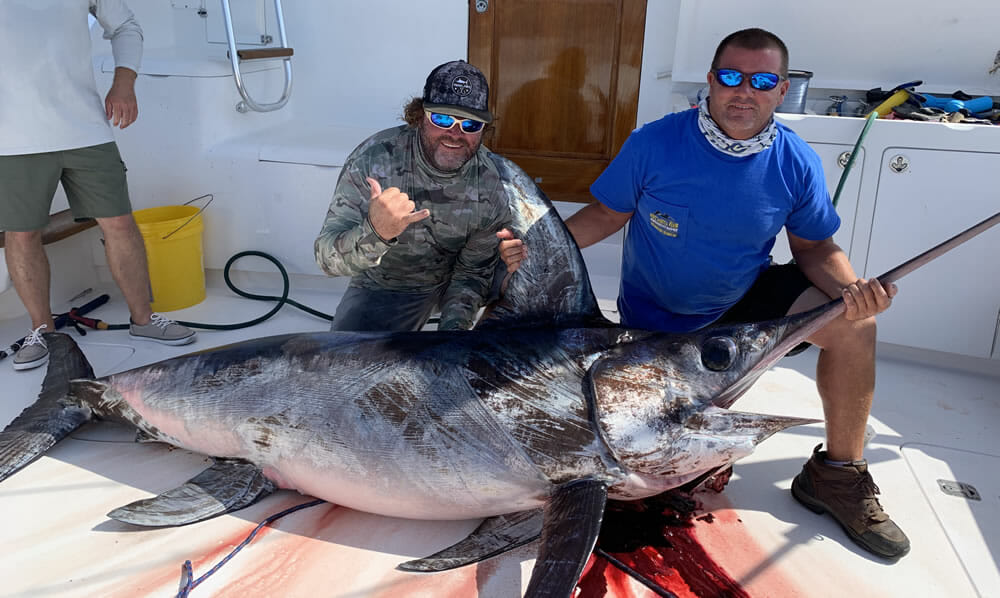 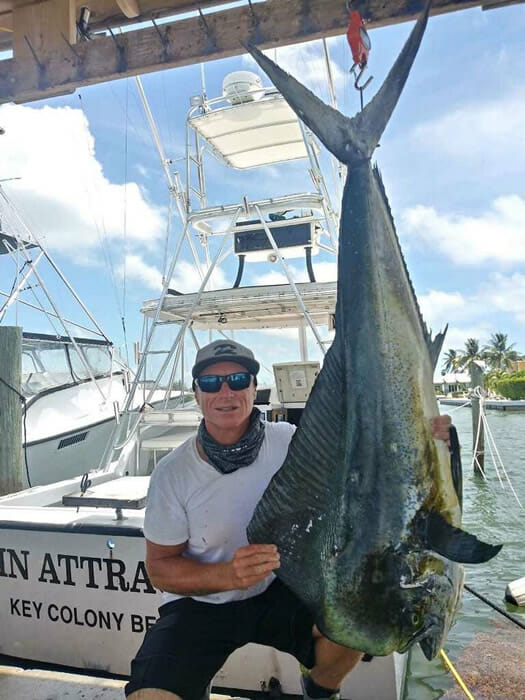 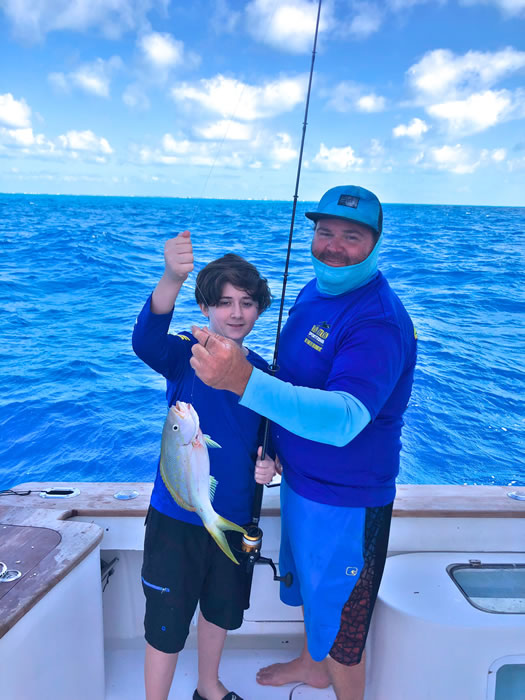 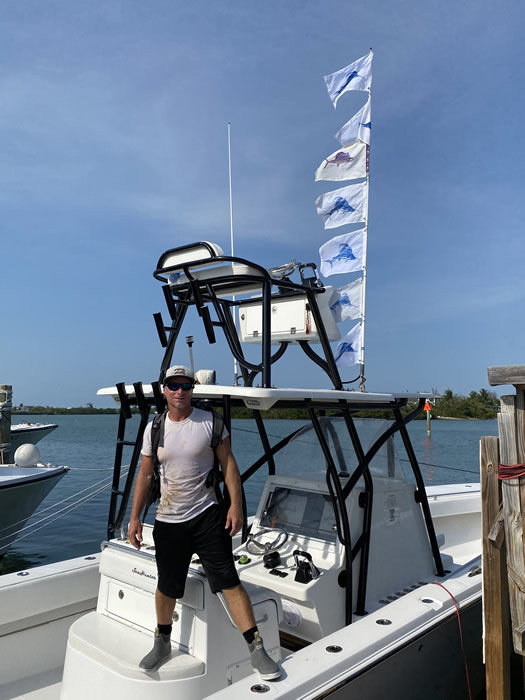 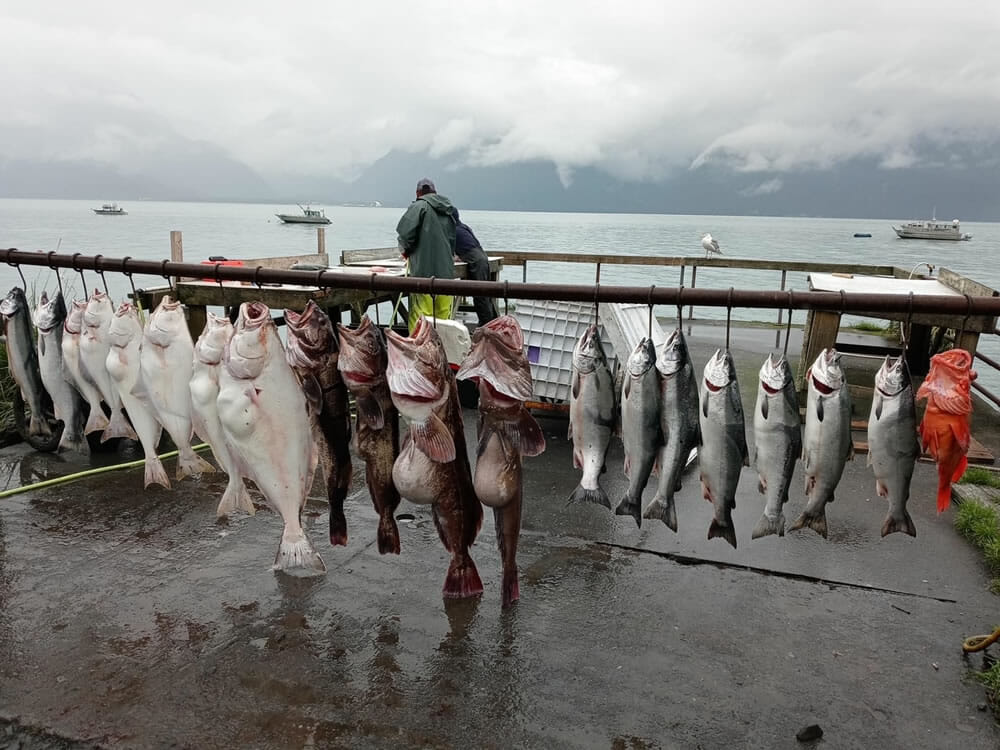