Every year near the end of October, beginning of November, Team Main Attraction begins to transition the way we fish in the Florida Keys. This time of year, through the winter, we spend a lot of time on the reef, or within 10-15 miles offshore. As the baitfish push closer to shore, so do our frequently targeted species (Sailfish, Cobia, Kingfish, Mackerel, Snapper, Blackfin Tuna, etc.). On October 31st, Captain Marty and Katie Lewis had some family come into town to go trick-or-treating with their little one. Katie’s father Fred, has always enjoyed Yellowtail snapper fishing on the reef, especially when the larger “Flags” show up as temperatures cool down.

Katie’s Family arrived in town around noon and rushed to get to the boat to get a few hours of fishing before the Halloween festivities began. Captain Marty took his father in law Fred, wife Katie, and two mates out to fun fish for a few hours on the Main Attraction. After a short ride out on the 43’ Torres, the crew got set up for some wintertime reef fishing.

Remember, once you get to the reef, you have to get anchored and put chum bags in the water to get the fish happy and comfortable before you throw a line in, otherwise the fish may spook and shut down. This particular day, the water was very clear, which meant the fish would see the line, so a lighter leader was used and only a few rods at first. See our Yellowtail fishing article for more on those techniques. 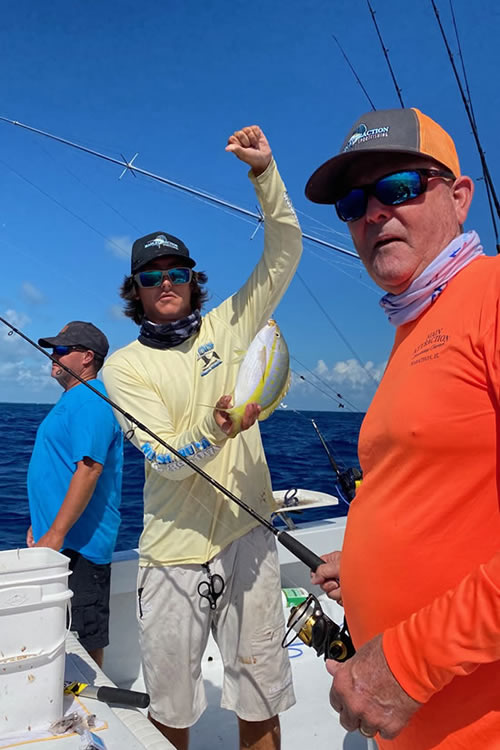 As the fish settled in behind the chum slick there were all kinds of fish happily feeding including Spadefish, Blue Runners, and Yellow Jacks. Captain Marty could see the Yellowtail snapper, but they were down deep and being very cautious. Captain Marty sent a kite up with two baits clipped in the line, one long and one short. Live bait is used on the kite rods and it’s important to keep the baits right near the surface to attract other fish. They started to catch the Yellowtail Snapper and even  had a few bites on the kite rods. Since they were on a tight schedule, they tried to utilize their time as best as possible. Live bait was pitched out the back of the boat to fire up the larger Yellowtail Snapper and get them eating more aggressively.

Throughout their fishing trip, they had several boats close to them, which was not affecting their fishing, but still very close. Eventually, a Sailfish showed up and ate the long kite bait, and once hooked, the rod was passed off to Fred to fight it. While fighting that Sailfish, another Sail popped up right behind the boat, on one of the “freebie” live baits they had previously thrown out. The second Sail didn’t stick around long, but the excitement was there and it reinforced the crew’s belief there could very well be more shots at a Sailfish that day. Once they got Fred’s Sail to the boat, first mate Lance leadered and released it. 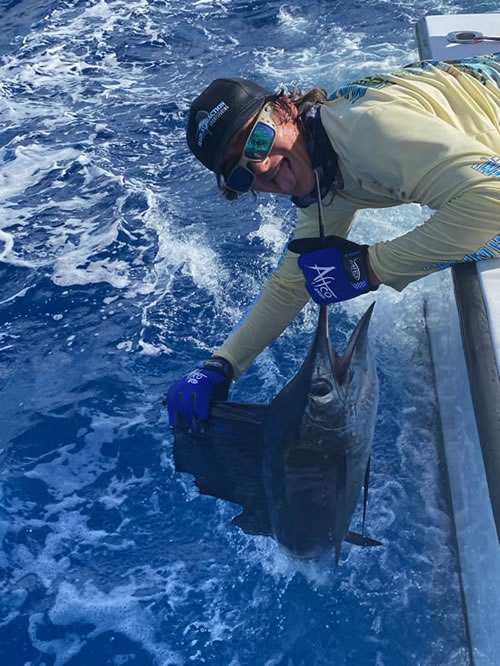 As the crew prepped the boat to get back to reef and kite fishing, they intentionally left a bait out just in case a Sailfish showed up. Sure enough, a Sailfish found and ate the bait and took off running towards a vessel that was trolling close to their boat. Captain Marty quickly told the first Mate to throw the buoy ( connected to the anchor to retrieve it later) as they went after the fish. Main Attraction was quickly backing down on the Sailfish and urgently trying to flag down the boat to get out of the fish’s way.

The boat didn’t seem to have an experienced captain on board (which is OK), but because of this, it took several attempts to get their attention and let them know what we needed them to do, to avoid losing the sailfish. Remember, Captain Marty has been running a vessel since he was 18 years old and has encountered just about every scenery possible while fighting fish.

Captain Marty and his Mate shouted to the other Captain over the sound of the motors and blowing wind to stop spinning his props and take his motors out of gear. If the fishing line got wrapped in the propellers as they spun it would be cut and they would lose the Sailfish. Also, Captain Marty was instructing his father in law, Fred, to lower the rod tip in the water, to help avoid the line getting tangled and cut off in their motors.

Marty was able to maneuver the boat to just within a few feet of the other vessel and work the Sailfish free. Thanking the other boat for cooperating, they continued to back down on the Sailfish and get the leader for a legal catch. By the end of the afternoon, they took home a dozen large Yellowtail Snapper for dinner and had released two Sailfish. What an amazing afternoon for just a few hours of fishing, with a great lifetime family memory!

With that our 2020-2021 Sailfish season has begun, with already two Sailfish under our belt and many more to come! If you wish to be part of this Wintertime Reef and Kite Fishing season, especially over the holidays, be sure to book your next Florida Keys Fishing adventure as soon as possible while time slots are still available. You can book by either calling us at (305)-289-0071 or visiting our contact page. 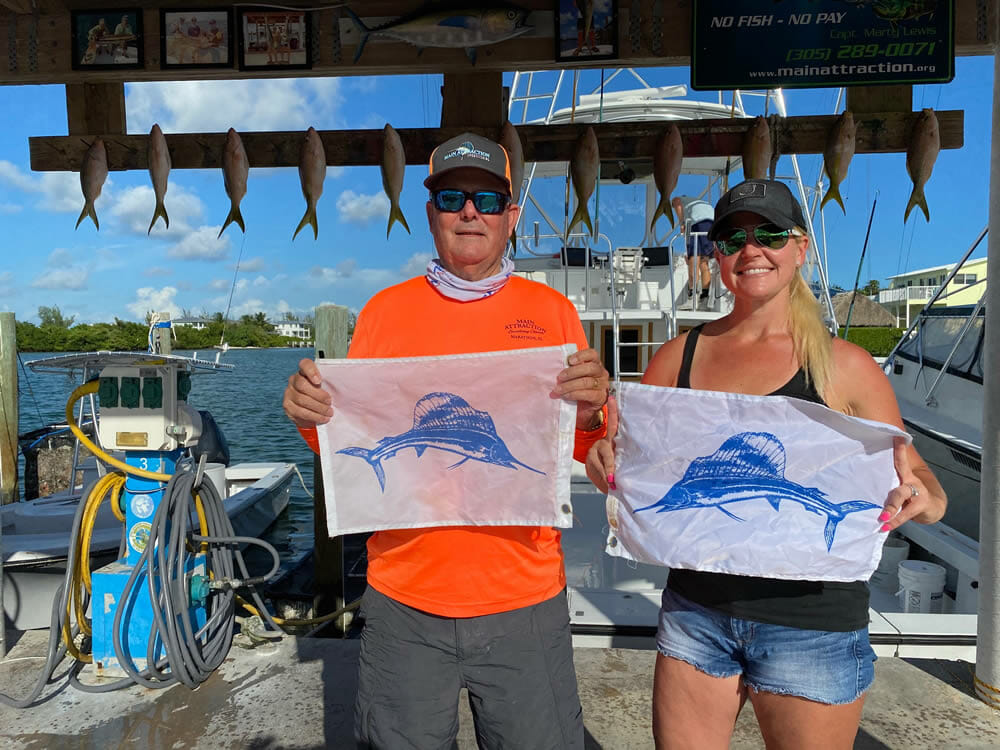 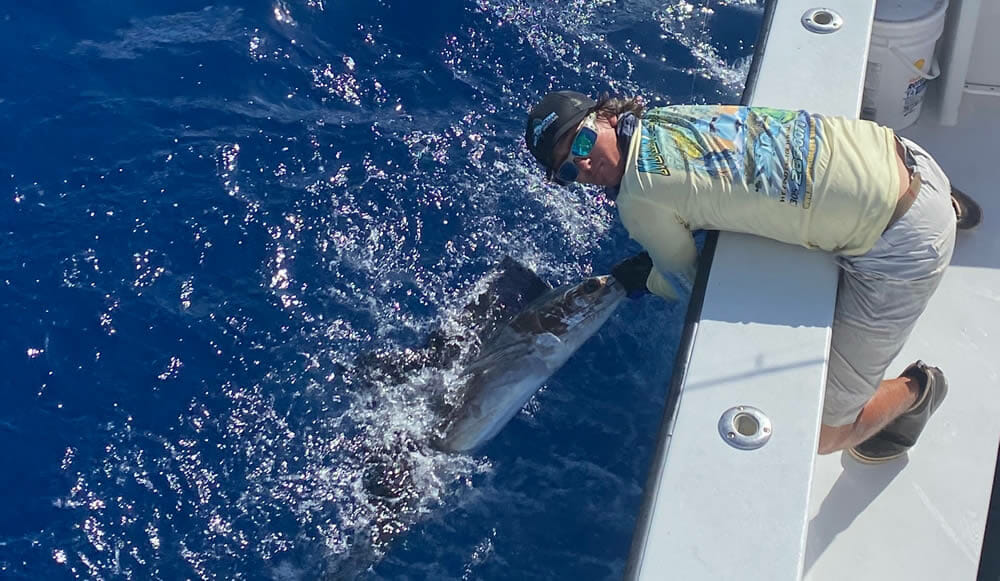 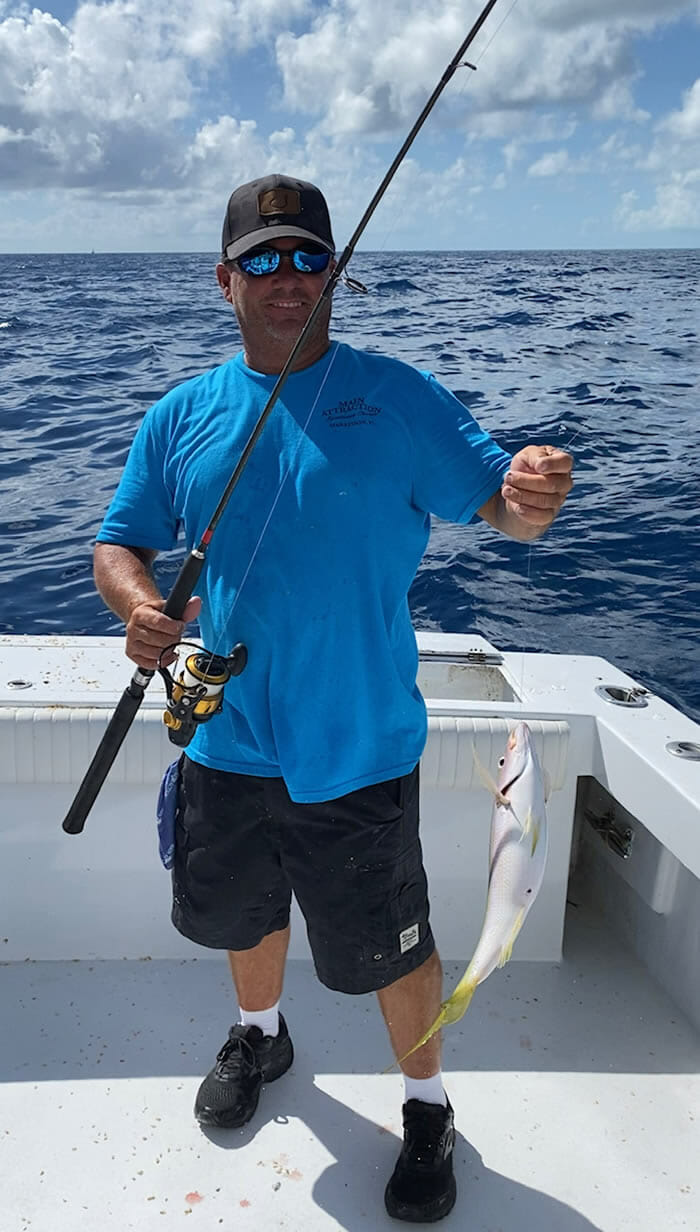 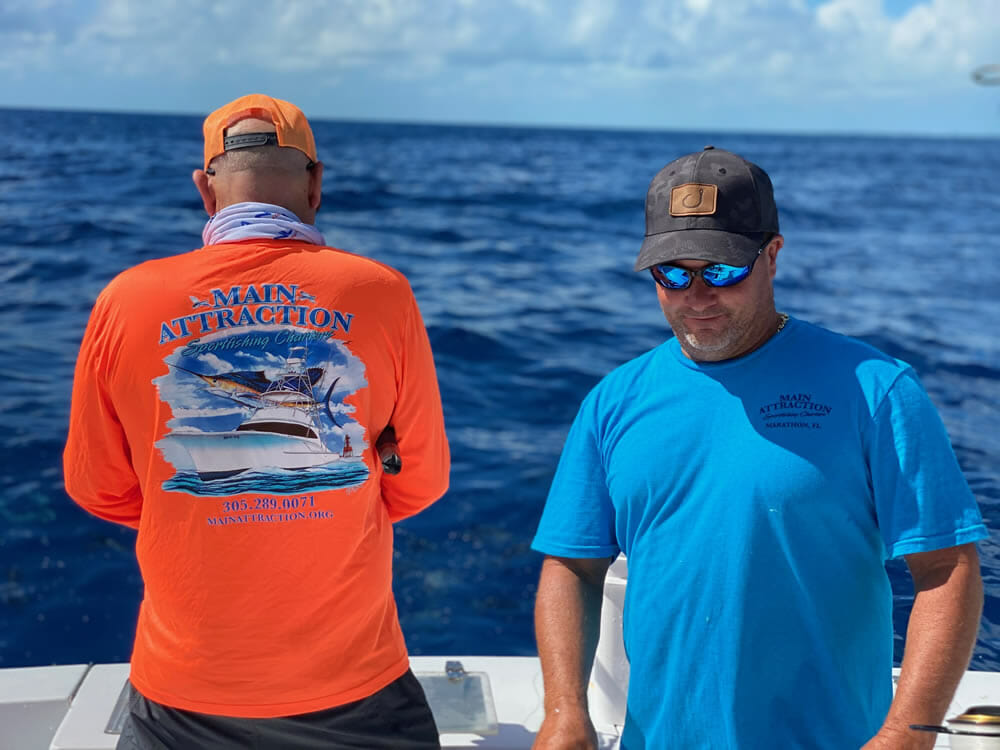