The Main Attraction two-day fish camp is a hands-on experience designed to teach anglers how our crews catch fish. Recently we had a springtime edition scheduled for March 4th and 5th. Unfortunately, a few days before the camp was due to start, it was clear the weather would be a problem, so we decided to move it to another weekend that would allow for calmer winds and seas. Unfortunately, we had three participants who could not make the new camp date, but we wanted to take advantage of the March fishing season.

We rescheduled for March 18th and 19th and couldn’t have asked for a better weekend! Both days were calling for sunny weather and calm seas. When we saw the forecast, we knew Captain Marty would have a lot of options to explore once they got out there. On Friday morning, the 18th, the crew loaded the boat, everyone enjoyed a breakfast provided by Marathon Bagel Company, and the Main One headed offshore to see what they could find.

On the way out, while Captain Marty was making his way to their destination, first mate Lance showed the camp participants Kenneth, Jacob, and Joe a variety of knot tying techniques. 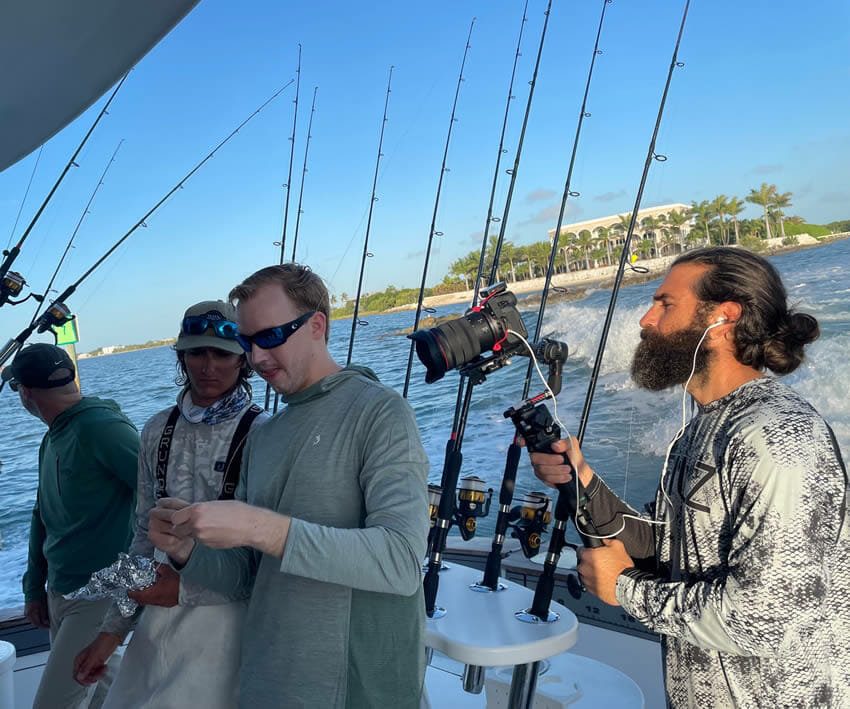 Jacob learning to tie a knot on the way to the fish.

Since it was a calm day, Deep dropping was first on the agenda, allowing the morning congestion on the hump pass. At Main Attraction, we use Hooker/Penn electric reels with chicken rigs with multiple hooks loaded with squid and bonito strips. Mate Lance was sure to get the camp participants involved, baiting the hooks, tying line and leaders, dropping the baits, watching for a bite, controlling the reels, and even gaffing the fish.

The team caught black belly rosefish and barrel fish for several hours, two rarer species. These species are not commonly seen fish as the technique is not widely practiced, making it something special for the group to learn. Kenneth, who lives in No Name Key, was instantly hooked on deep dropping and mentioned how much fun he thought it was. 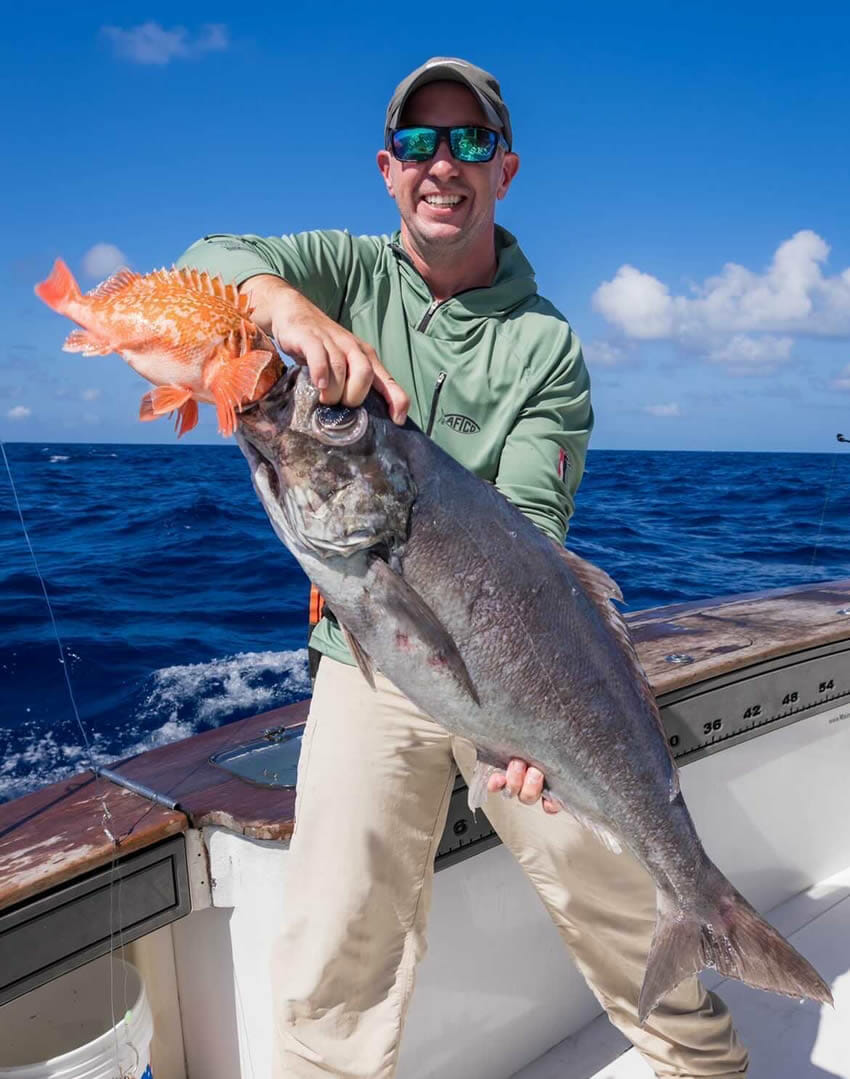 Kenneth posing with a barrel fish after playfully sticking a rose fish in its mouth.

Kenneth exclaimed he was now considering buying a deep drop rod/reel after learning the new technique. After putting three Barrel fish and about a dozen Rosefish in the box, they set their sights on the Marathon hump, which wasn’t very far away.

Once the Main One got to the hump, the participants learned how to prepare to live bait for Tuna. When you are at the hump, there are two techniques you can utilize. The most common technique on the hump is trolling near the surface, which catches smaller Tuna that range anywhere from 2-6lbs. Captain Marty prefers to catch Blackin Tuna by chumming with live bait that brings larger Blackfin from the deeper water up to the surface. These Tuna can weigh 20-30lbs and put up a great fight on light tackle.

Marty lined up the Main One while watching out for amateur boaters that might run over his lines and cut him off. First mate Lance started tossing scoops of bait out the back, along with the camp participants. Not long after, a bait jumped out of the water, followed by a splash, and before they knew the bite was on. Blackfin Tuna were busting through the surface as bait frantically flew into the air to escape their pursuers. Once the timing felt right, the anglers cast their lines behind the boat into the fray, and seconds later, their lines were screaming with jumbo Blackfins on them! If you have never seen this first hand, you know that this is a truly magnificent sight. A sight that, even as fishing professionals, we never get tired of seeing.

Live baiting for Blackfin Tuna is organized chaos, but the commotion attracts other predators like large sharks weighing hundreds of pounds. The anglers cast multiple lines together to go off at once, giving them the best chance in the race against the sharks chasing the fish they were fighting.

When the pandemonium was over, Kenneth, Joe, and Jacob had each caught several large Blackfin weighing around 30lbs. They also baited their hooks, chummed, and gaffed their fish. It was an action-packed and educational experience to be sure. 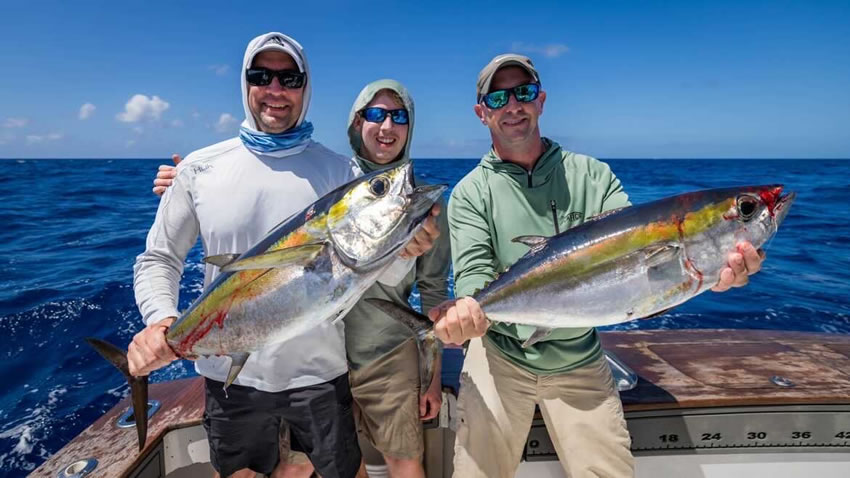 From Left to right; Joe, Kenneth, and Jacob hold up two nice Blackfin Tunas moments after they were caught.

Once back at the dock, the guys all posed for pictures with their superb catch and started to learn how to filet the different types of fish they caught. As with all of our training camps the fish caught are split amongst the parties so everyone can enjoy the catch.

Day two of the camp was being held on a Saturday. It was time for the students to learn how to kite fish, another technique that could produce incredible results. This technique involves flying a kite high in the air, with a series of clips attached to the mainline. Multiple fishing lines are clipped into the kite line as it is sent into the sky. The fishing lines are directly above the live baits on or near the surface. When the bait is presented this way, far away from the boat, lines out of the water, swimming near the surface, this is very tempting to predators, and they usually can’t resist taking the bait.

Kite fishing is a great way to target Sailfish, Kingfish and other Mackerel. Many people don’t know that we catch all sorts of other unexpected species in our Kites as well, such as Blackfin Tuna, Mahi, Grouper, Mutton, and even Yellowtail Snapper! Kite fishing is not something you do once and learn right away. It takes lots of practice, but Captain Marty and Lance were able to teach them all of the basics to practice on their own. The participants also learned and practiced how to adjust the kites to keep the baits in the water during different weather conditions. The students also learned first-hand the other kites we use in different situations.

On this particular day, the kite fishing was a little slow, which can happen, so while working the kites, the group also targeted Yellowtail Snapper to get a little more meat in the box for the guys. After a few hours of rigging the kite lines, working them, and waiting for a bite, they changed gears.

Captain Marty knew some Permit had recently been spotted on the wrecks and decided it was time to go look for some. The weather was definitely on their side, which was great for learning because it allowed them to deploy a wider variety of fishing techniques .

In the springtime, Permit move offshore to the wrecks and start to spawn. Captain Marty uses his tall tower to spot schools of Permit by looking for a yellowish cloud in the water. This yellow cloud effect might be the sunlight reflecting off their bellies since they do have yellow coloring on their bodies.

The participants learned how to rig up the rods and put their live crabs on the hook. Marty spotted a fast-moving yellow cloud and called for bait to be pitched. The crab was taken, and an angler hooked a permit, but, unfortunately, a hungry shark showed up and ate the fish before they could get it to the boat.

This was a bit sad because at Main Attraction, we practice catch and release with all Permit, so it was heartbreaking to see this one lost to the shark. While they are legal to keep, these fish are a vital part of inshore fishing guides livelihood, and out of respect for them, we do not kill these fish when they head out to our waters to spawn. We can liken it to how it is legal to kill a sailfish, but we practice catch and release to protect this highly valued sportfish for future catches.
When Captain Marty spotted the permit school, he thought they were pretty skittish. Many of the wrecks will have divers spearfishing throughout the weekend, which makes the fish timid at times. So, Captain Marty decided to ride the reef line instead, hoping to sight fish and catch a sailfish for his crew.

After about an hour, Marty decided to go to another wreck to get the camp participants another chance at catching a permit. It was a different location, but it was also later in the afternoon, and a lot of the boat traffic had settled down. This time around, it went much better, and Kenneth, Joe, and Jacob each caught a permit of their own! Better yet, there weren’t any sharks around that ate their fish, so they could learn how to catch, photo safely, and release these beautiful sportfish. 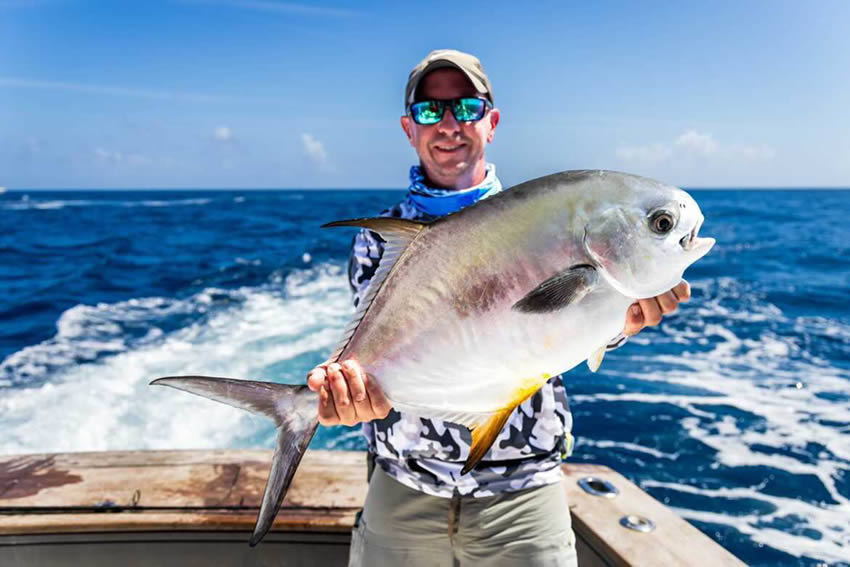 Joe holds up a beautiful Permit that he caught.

By the end of day two of our fish camp, each participant learned many new techniques: knot tying, reading conditions, reacting to situations, and avoiding common mistakes. They learned a lot, but they also got to catch some cool fish, take meat home, and always have the memory of their marine adventure. We also had a professional photographer on board to capture lots of moments, which we will put together a video of and add to this article soon. 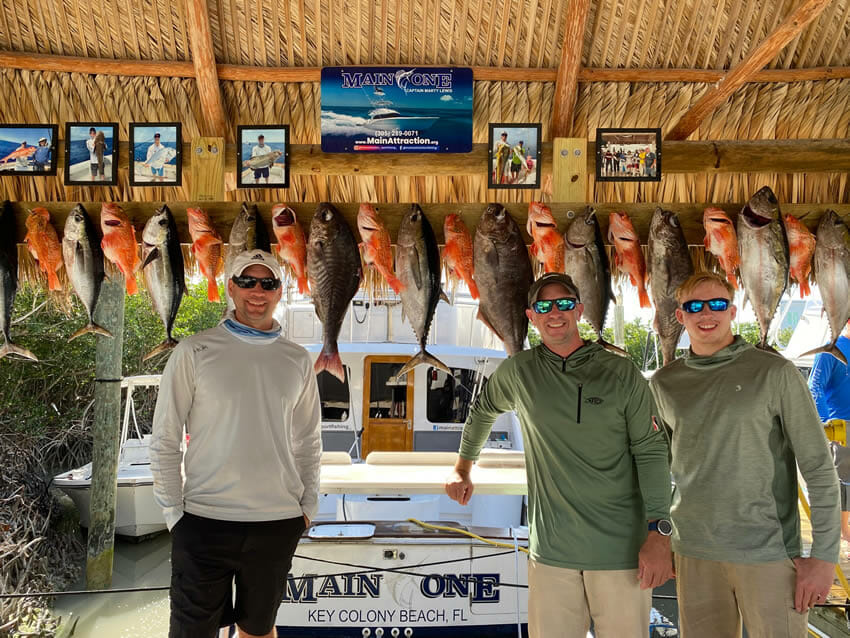 From left to right; Joe, Kenneth, and Jacob posing with their catch from day one.

For anyone interested in participating in future fish camps, please reach out to us, and we will be happy to inform you of dates. We plan to do another summertime fish camp on July 15th and 16th ( weather dependent). That camp will focus more on the special annual Mangrove Snapper spawn, Offshore Fishing (Mahi, Blackfin Tuna, Wahoo, Tripletail), and deep dropping if conditions allow. 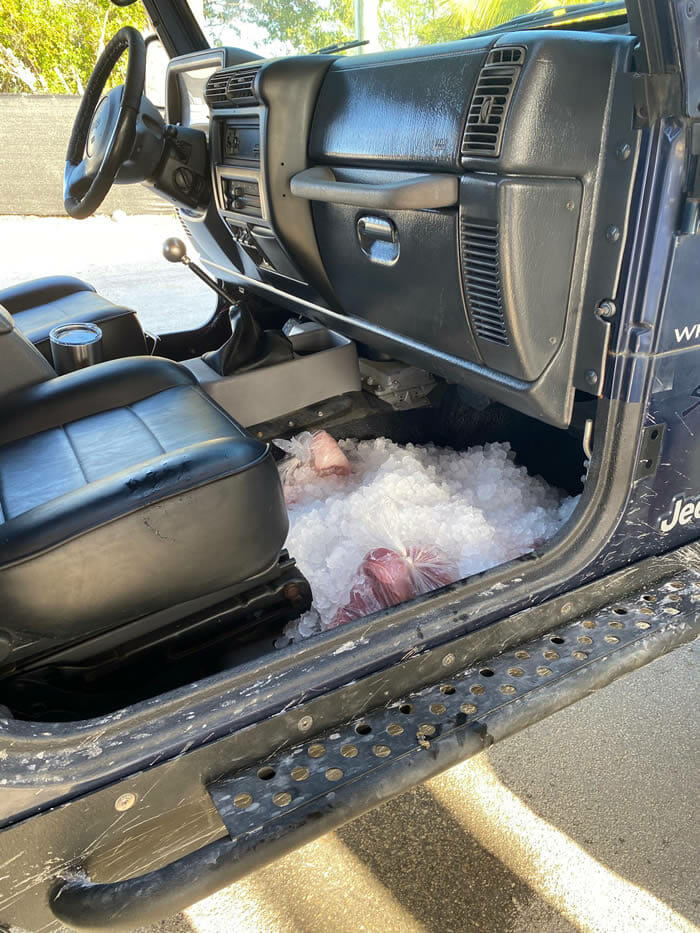 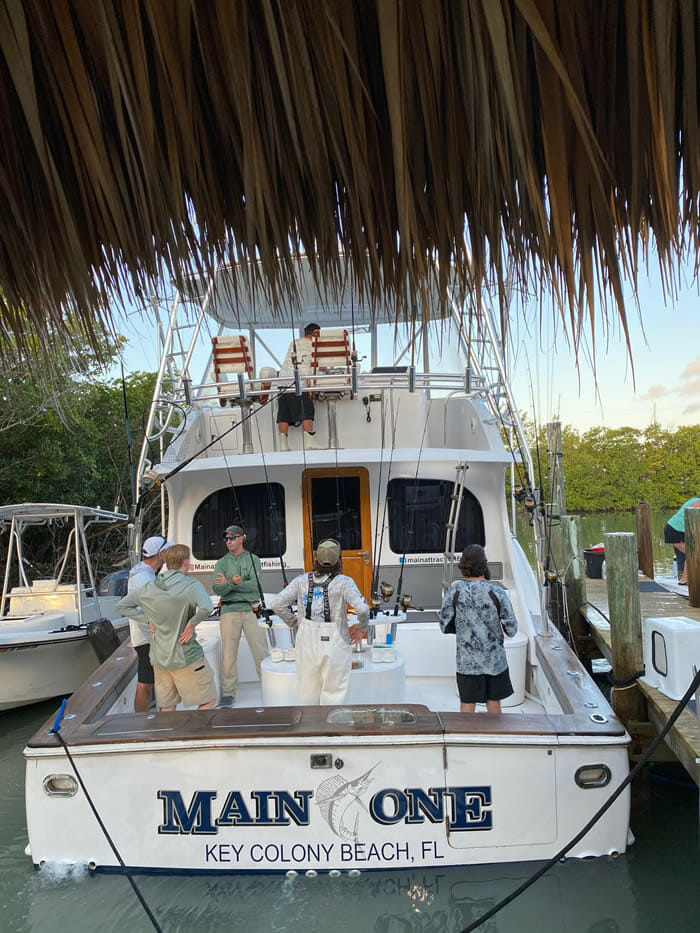 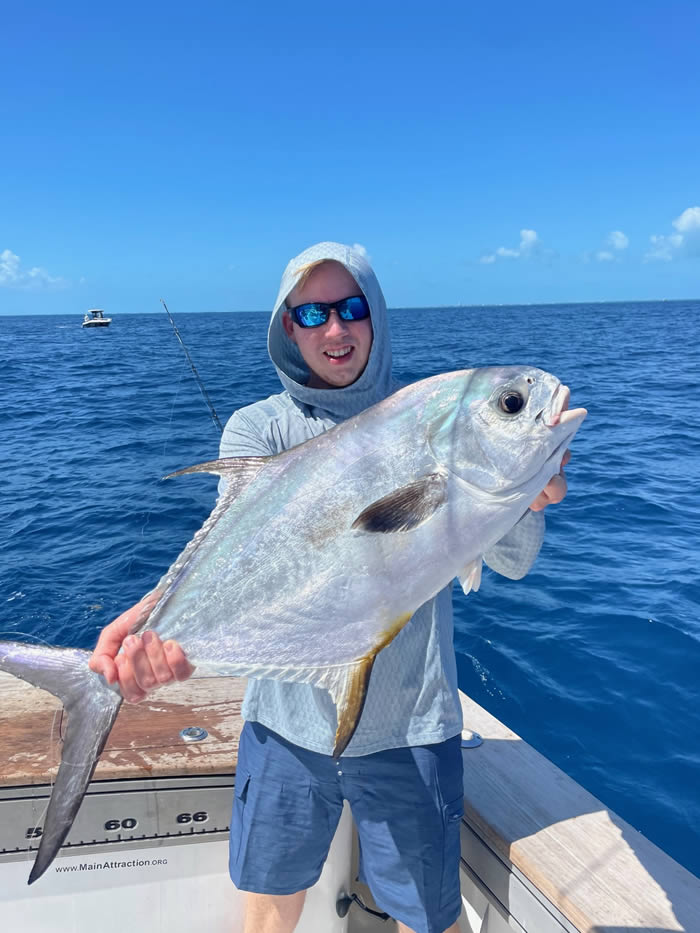 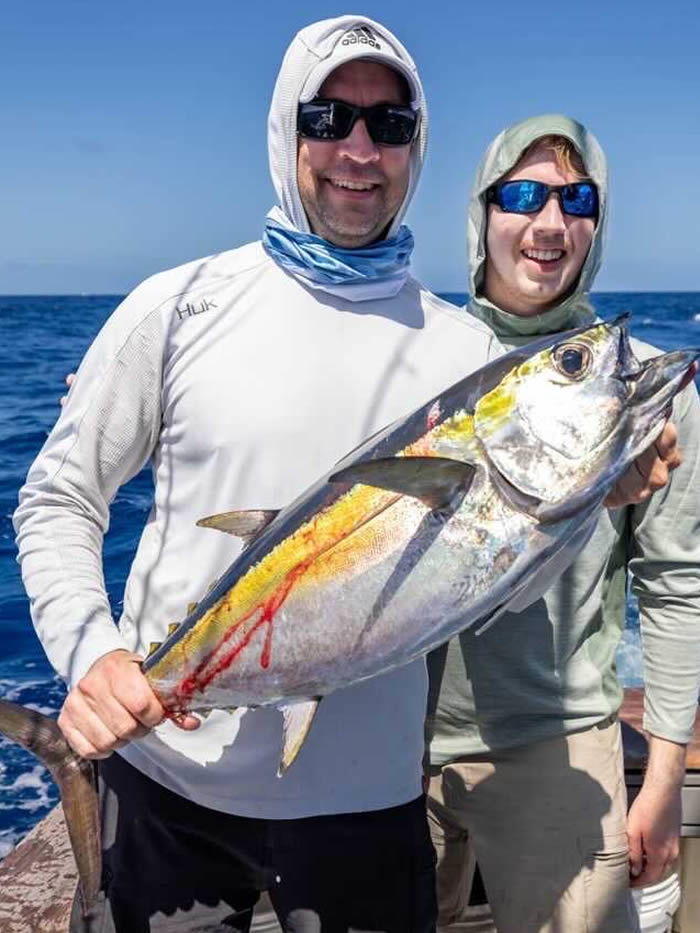