Our Summertime Fish Camp was officially wrapped up last week and we are thrilled to report it was a success! Our Fish camps are designed for anglers to gain more experience and hands-on training learning how to tie knots, rig baits, and catch fish. Each fish camp has a three-day window, fishing two days, with an extra day on reserve, in case there are weather issues. Another cool feature of the camp is we bring along a professional photographer, to capture photos and video. The images and video are used for the recap article and Youtube video while providing a nice keepsake for the participants.

Our fish Camps typically include some type of refreshments which we disclose on the flyer when we announce the event. This time around a delicious lunch was prepared by Brutus Seafood and each camp member received the Main Attraction “Swag Bag” filled with goodies to take home.

The camp consisted of all age groups, the youngest was a 15-year-old high school student Niko. Niko’s mother Jill, initially called to inquire about the Fish Camp for her son. She explained how her son was a fishing enthusiast and she thought this would be a wonderful experience for him.  We agreed and signed him up! Niko fished with his friend Josh and while they were first-time customers of Main Attraction we are pretty confident we will be seeing them again! 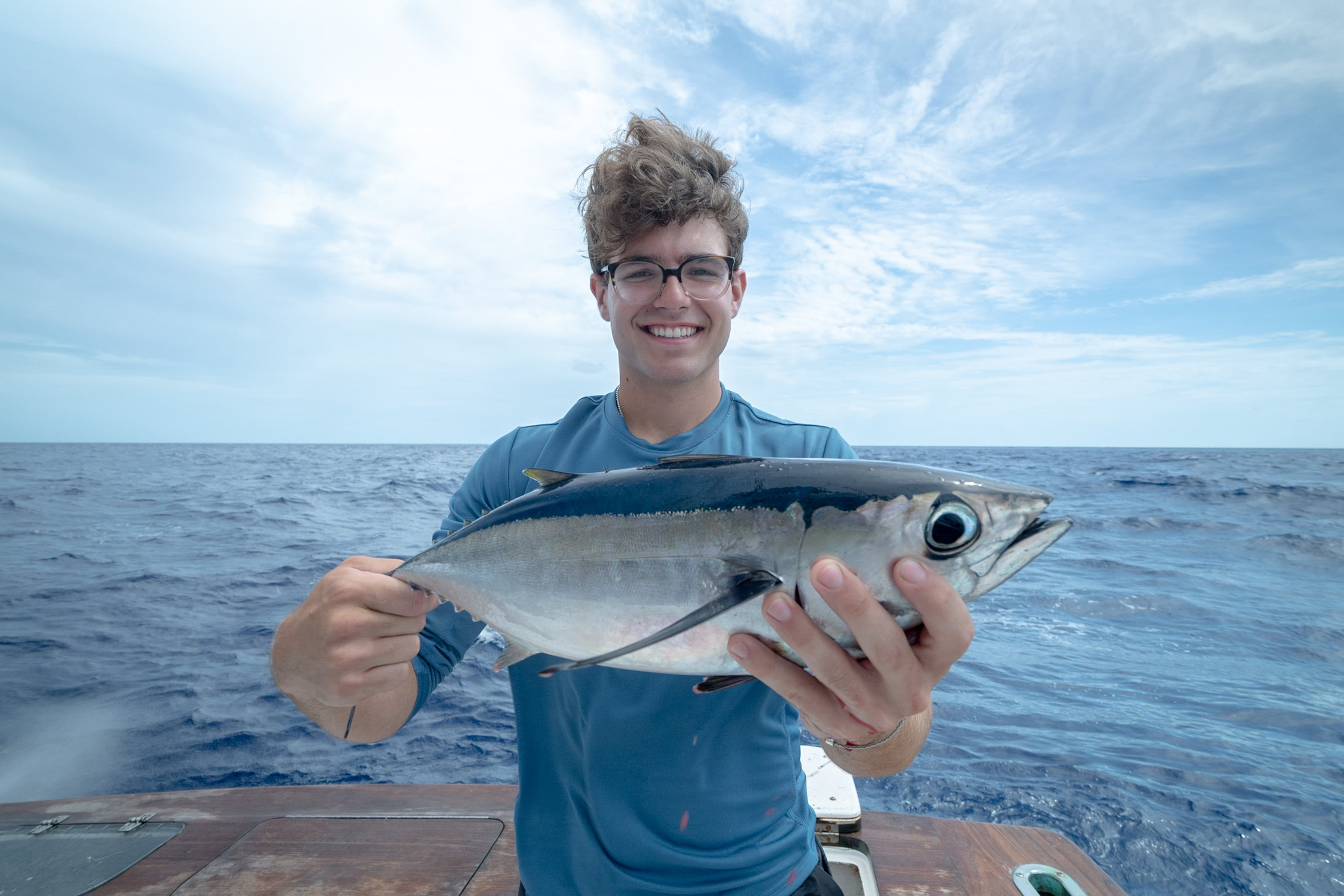 Josh with a Blackfin Tuna he caught during the camp.

We also had a gentleman named John Haggerty, who had previously fished with Main Attraction several years back. John wanted to learn more about the Key’s style of fishing, as he plans to retire and frequent the Keys more often. 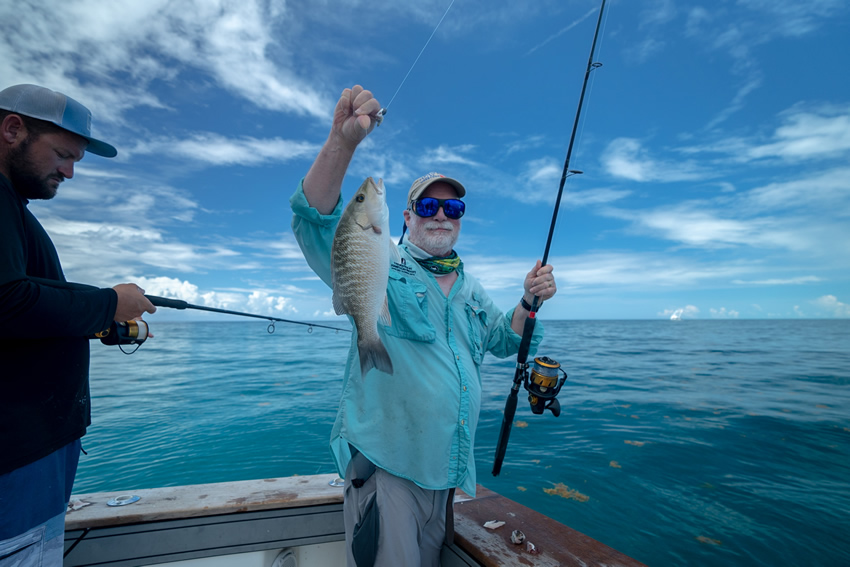 John Haggerty with a Mangrove Snapper caught on the fish camp during spawning season.

We also had our good friend and fellow charter captain from up north, Dominick Ferels who bought along his buddy Randy. We featured Dominick in our long-term relationships article earlier this year. 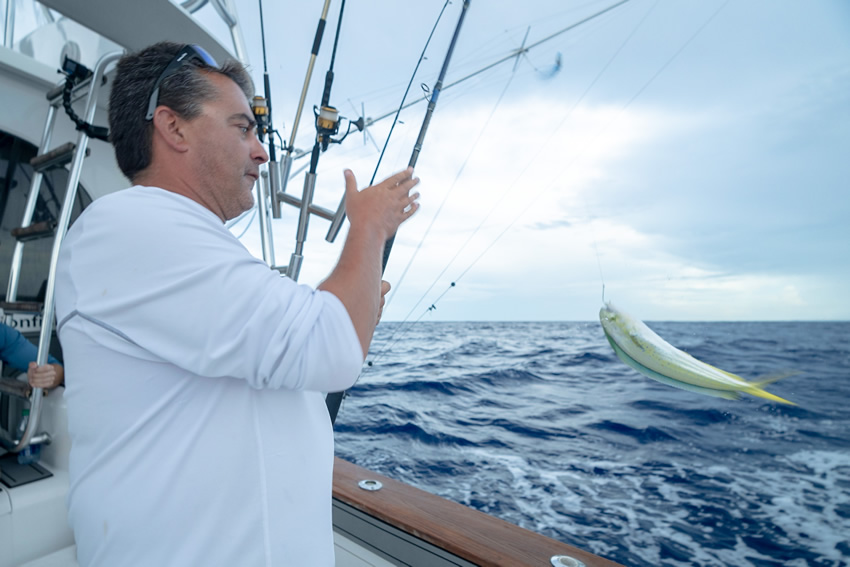 Dominick Ferels flips a schoolie Mahi into the boat during the camp.

On the early morning of Friday, July 15th everyone gathered at the Marathon Sailfish Marina. The Main One was loaded with live bait and full fuel tanks, ready to fish. Captain Marty Lewis introduced himself and reviewed the safety procedures on the boat. Once everyone was acquainted they headed off for the day with a boat full of fuel and live bait.

Day one started rainy with choppy seas but the crew made the best of it and started on the reef. Every year on or around July the mangrove snapper spawn, and are plentiful. While we waited for the weather to clear out, Captain Marty and first Mates Ben and Nick, showed the group how we get on the snapper bite. Hooking a Snapper can be tricky as there is a lot of pressure on them from anglers this time of year. When you drop your bait down to the bottom on a knocker rig the mangrove snappers swarm onto the bait.

You would think this would make it super easy to catch them but there are so many of them and they are very aggressive and have teeth, so they can take your bait before you hook them quite often. They are also good at running into the rocks and breaking off your line. There are Grouper and other large predators around as well that you may or may not catch. The key is to not set the hook on the taps but wait for the tug. Once the fish is hooked lift up and wind down, but wind as fast as you can. You need to get that fish off the bottom as quickly as possible.  Captain Marty decided that for Friday their focus would be on Reef and Wreck fishing. They also caught a large smoker Kingfish (King Mackerel). 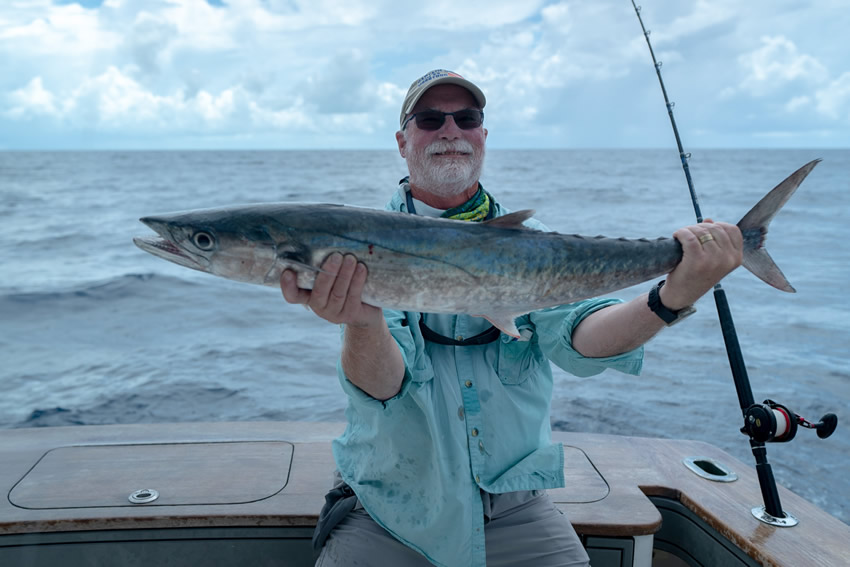 When it comes to the fish camps, whatever fish is legal and in season is harvested, filleted, and divided evenly amongst the participants to take home and enjoy. On the first night, several of the participants took their catches to local restaurants and had them prepared for their families. We had lots of positive feedback, on how delicious the mangrove snapper was. 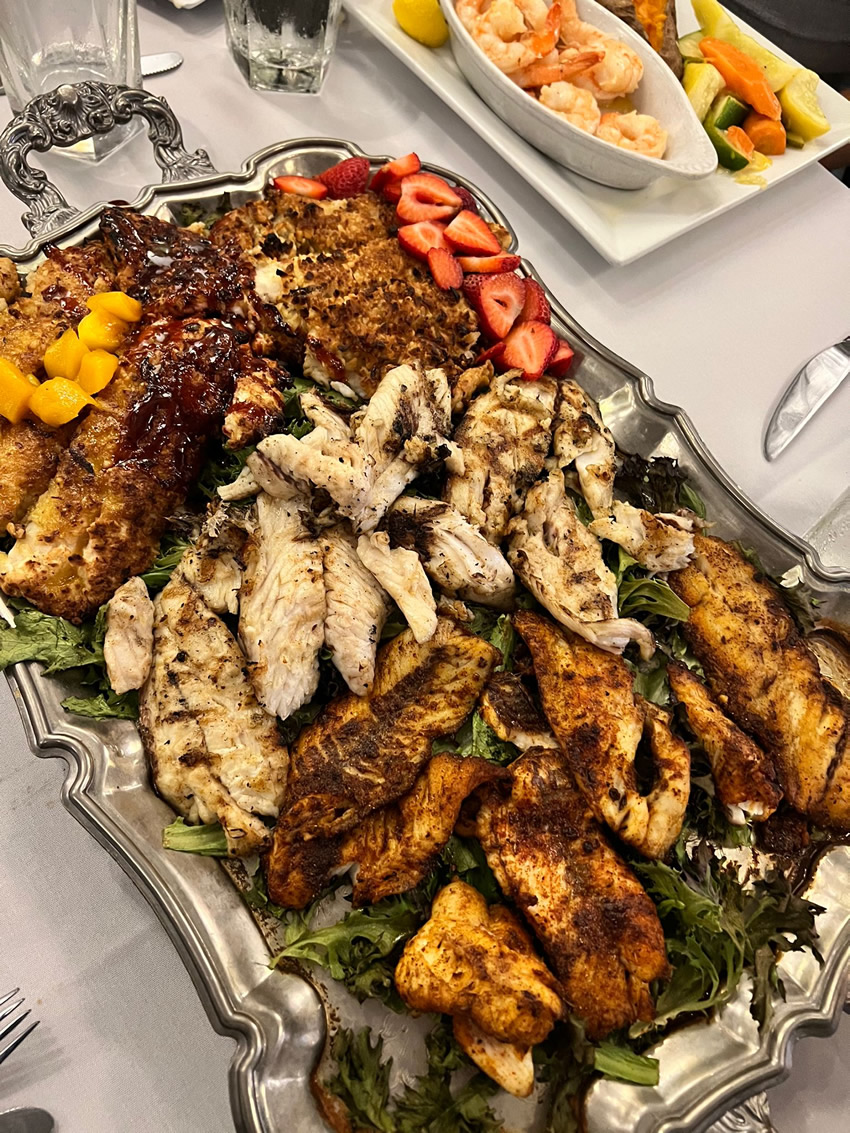 Day one of the fish camp yielded a delicious dinner for our participants.

On day two, Saturday, July 16th, the skies were pretty sunny and the day started choppy but calmed down shortly after leaving the dock. Captain Marty decided to head offshore and go after pelagic fish and possibly work in some deep dropping if the current was right. So off they went, offshore in search of Mahi dolphin, Blackfin Tuna, and other deep-water critters.

The Mahi fishing was very slow that day. Captain Marty saw all the right signs for catching Dolphinfish, weed, and debris, birds working, but just not a lot of fish around. They caught the few Mahi that presented themselves, but then Captain Marty switched their focus to Blackfin Tuna. 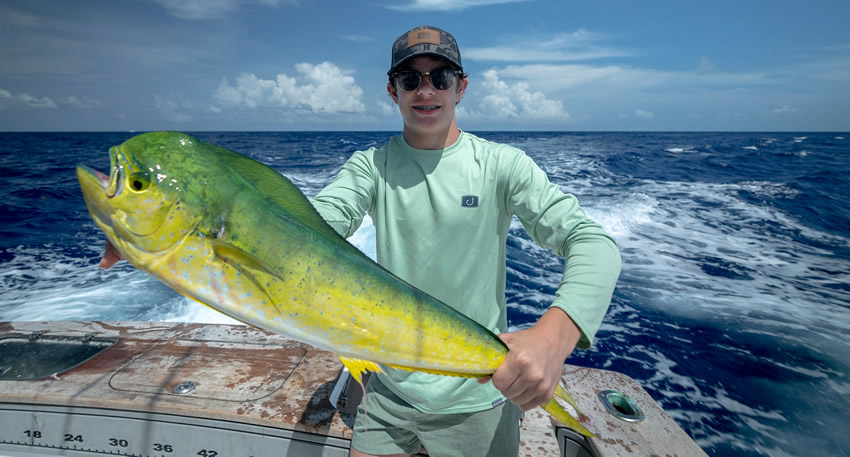 While the Mahi fishing was slow, they did catch some which was great for learning the proper technique.

Generally, Captain Marty tends to focus on Tuna when it’s cloudly out. Tuna have large eyes and superior sight when compared to many other species of fish.  Perhaps their eyes are sensitive to light because it seems when it is cloudy out they are found closer to the surface. Conversely, Mahi are much easier to spot in the sunlight so they are often the better target when it is sunny out.

So what do you do when the visibility is great but there aren’t any Dolphinfish to catch around? Well, Captain Marty showed his pupils for the day how to use a lead to get baits to the Blackfin Tuna since they weren’t up on the surface. The technique worked well and the participants got to limit out on Tuna, all while learning how to rig for them, gaff them, and bleed them properly so they could have a tasty dinner. 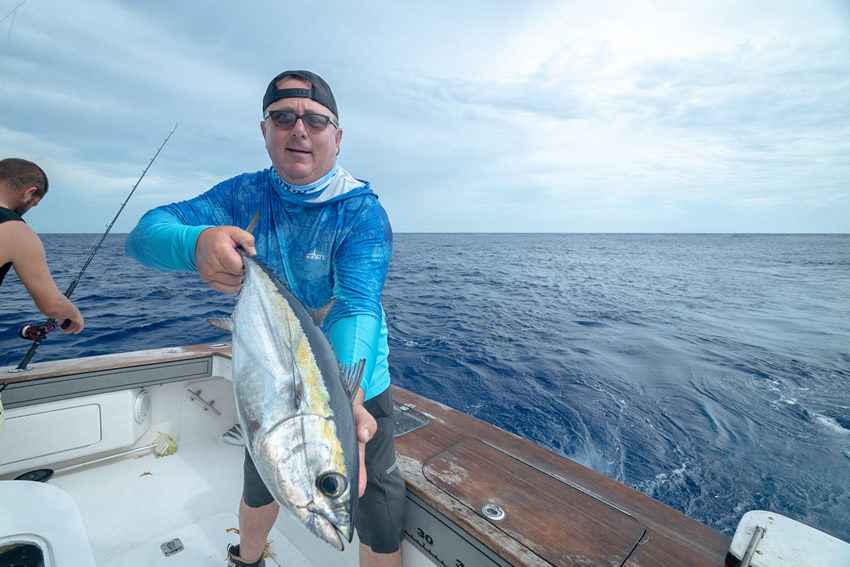 Randy with a Blackfin Tuna caught during day two of the summer fish camp.

After that Mates Ben and Nick took out the electric reels as Marty headed out for some Deep Dropping spots of his. On several of their drifts, they caught a Barrelfish and a beautiful (and very delicious) Queen Snapper. 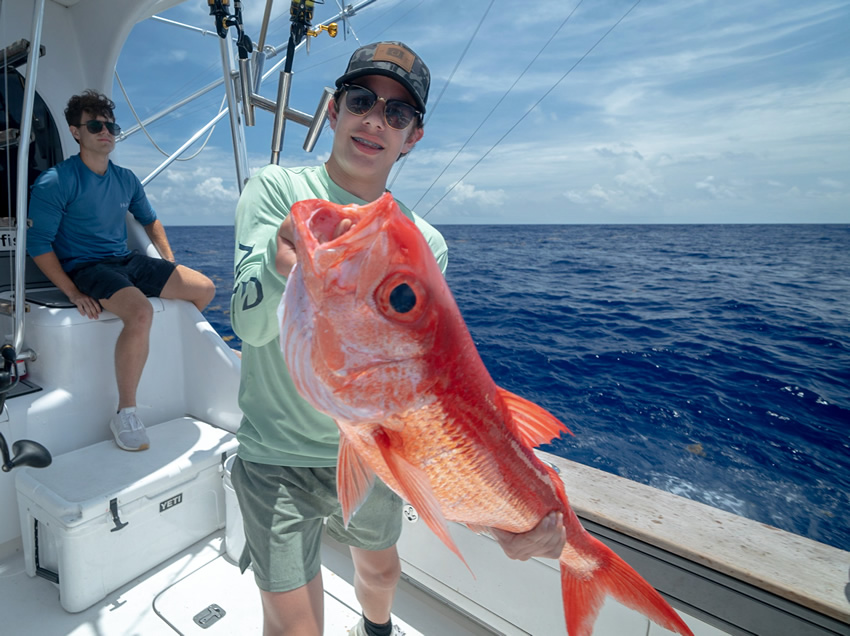 Niko holds up an incredibly beautiful and equally delicious Queen Snapper caught in the deep water.

In two days, the fish camp participants learned a lot of different styles of fishing for a variety of different species. They learned many proven techniques for fishing in the Keys and a few secrets that can take decades to figure out on your own.

Ms. Jill, told Katie Lewis whom had booked her son for the camp how difficult it is to give her son a birthday present. She explained that he doesn’t ask for much, but he loves fishing so this was perfect. She gave us the ultimate compliment after the camp was done, telling us that her son Niko, said “this was the best gift ever”. 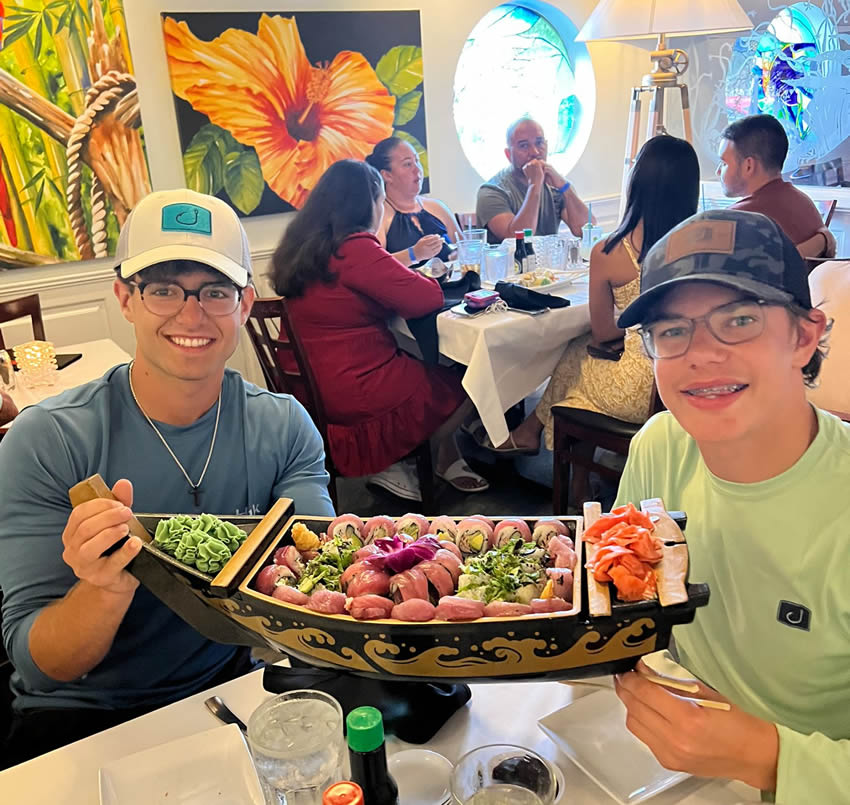 Josh and Niko celebrating with a platter of fresh Tuna sushi using the fish they caught.

On behalf of Captain Marty, the first mates, and Katie, we are so thrilled the camp participants enjoyed themselves and we loved seeing a mixture of repeat clients and new ones to forge new relationships. When we hosted our Spring Fish Camp, we had several new clients and since March, they have all been back to fish charters. That is what it is all about, obviously catching fish, but also having fun and learning something along the way. 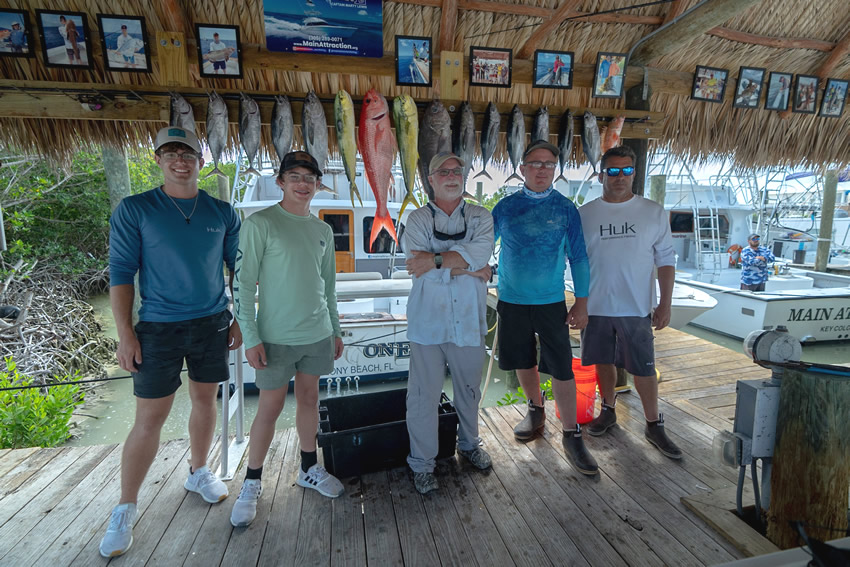 The Main Attraction Summer Fish Camp Class of 2022 with their Day 2 catch.