All About The Blackfin Tuna – Facts About Florida Keys Tuna

This article is the second installment of a series we are writing about the many unique species of fish in the Florida Keys. At Main Attraction, we believe the more you know about the fish you are targeting, the better you will be at catching them!

Learning interesting facts about the incredible species that live in the waters of the Florida Keys helps anglers develop a greater respect for their quarry and make well-informed decisions on whether or not to keep or release a fish. This week we will learn about the Blackfin Tuna. Our Captains have been catching Blackfin Tuna for many years in the Florida Keys and their knowledge has helped us write this article. This article is a result of information gathered from their experiences and some research of publicly available information to corroborate their anecdotal evidence. 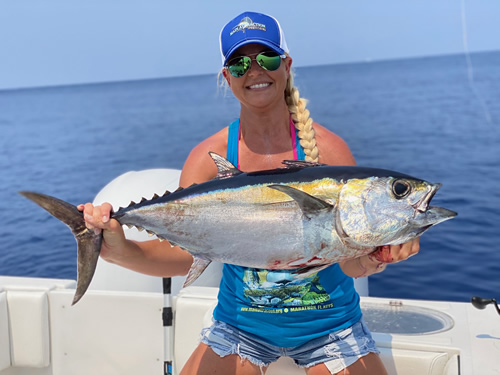 Thunnus atlanticus commonly known as Blackfin Tuna can be found throughout the western Atlantic. Blackfin is the smallest in the Tuna family reaching lengths of about 40 inches and weight of 46lbs. In the Florida Keys, we can often catch Blackfin Tuna in the 20-30lb range when the conditions are right, and our live wells are full of live bait. Our Captains know the larger Blackfin Tuna usually stay deeper in the water column while the smaller ones are closer to the surface. The technique used to catch the larger ones is to throw free swimming bait in the water to raise the schools of large Tuna near the surface and then present baited hooks. When this technique is not an option simply trolling the surface for smaller Blackfin Tuna can be very effective. You can read more about our Blackfin fishing techniques here. 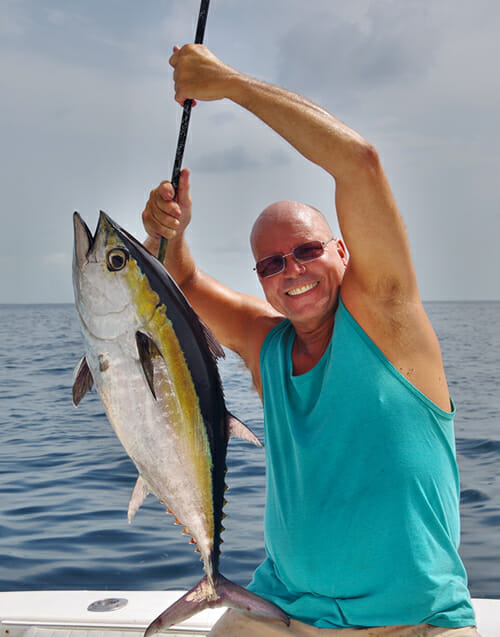 The Blackfin Tuna is built for speed. They have the typical hydrodynamic streamlined tuna body that resembles a football. They can reach speeds up to 46mph and they can maintain this speed even as they are flying through the air! Tuna swim fast and eat aggressively. They feed by straining the water for smaller prey and by chasing down and engulfing larger prey. Our Captains and clients have witnessed Blackfin Tuna chasing and eating flying fish many times. Blackfin Tuna will eat a wide variety of fish and also enjoy eating squid, shrimp, and crabs. Blackfin travel in schools not only to hunt more effectively, but also as a protective measure. Blackfin Tuna are also known to travel and school with Skipjack Tuna in the Florida Keys.

From a young age, a Blackfin Tuna must learn to avoid being eaten by sea birds, Dolphinfish (Mahi), Skipjack Tuna, and even its own species. Speed is the key here, and once they are larger, they must avoid being eaten by the Blue Marlin, an apex predator capable of reaching speeds of 80mph. A freshly caught live Blackfin Tuna can be used as an irresistible bait for a large Marlin if there is one in the area. Large Sharks weighing several hundred pounds will often follow our boats as we catch Blackfin Tuna and it is not uncommon for one to get “Sharked” as a client reels it in.

Blackfin Tuna have a maximum lifespan of around 5 years. It takes them 2 years to reach sexual maturity, in comparison to the 3 months it takes a Mahi. Blackfin have been seen by both fishing Captains and researchers over the past few decades as a plentiful and sustainable food source. The Blackfin Tuna currently enjoys a conservation status that is currently of low concern and a stable population. Over the last couple of years, some Captains in Florida have observed reduced numbers in areas where the Blackfin Tuna is commonly known to frequent. This has prompted Florida Fish and Wildlife to introduce a bag limit in federal waters and to reduce the daily bag limit in state waters to 2 fish per person, or 10 fish per vessel whichever is greater. (at the time of writing this article) Main Attraction sees this as a purely preventative measure to help ensure the population remains strong in Florida for generations of anglers to come. We can see first hand there are many Blackfin tuna still out on the Marathon Hump and appreciate efforts to keep such a wonderful fishery stable. Even with the reduction in how many Blackfin boats can take on one fishing trip, that is still plenty of meat for a great day of fishing!

The Blackfin Tuna is absolutely delicious, especially eaten fresh. In the Florida keys, locals make sushi with it, or simply slice it thin and eat it raw. Fresh caught Blackfin tuna is also the main ingredient in a local favorite called Tuna Nachos. This dish consists of fried wonton wrappers topped with fresh seared tuna, and all the sushi-related fixins you might want, soy sauce, ginger, wasabi mayo, etc. Blackfin Tuna can also be smoked to make a delicious Florida Keys style Fish Dip or a tasty Tuna Fish Salad.

A good tip for Anglers to know when catching a Tuna in the Florida Keys is to bleed it out immediately upon catching it. Tuna fight hard and swim fast, when you first boat them their heart is pumping extremely fast. By cutting the main artery under their gill plates halfway between the throat and mouth the blood will pump out of the flesh quickly. This makes the meat a much higher quality for eating raw. Once the main artery is snipped with a knife or scissors the tuna should be placed in a very cold icy brine where it will bleed out. In the Florida Keys, some fishermen believe the height of flavor for raw consumption is after 3-6 hours of sitting in an icy briney bath.

If you plan to reserve a Tuna for cut bait do not bleed it out! The flesh and the gills will hold a lot of scent, which would be irresistible to many inshore predators like Tarpon and Sharks scavenging for food in the shallow waters of the Florida Keys in the mornings and evenings.

The Blackfin Tuna can be identified by a dark-blue to black stripe across its back usually with a golden hue under it and a silver belly.

Blackfin flesh is less fatty and slightly lighter in color than a Yellowfin tuna.  The typical size of the Blackfin we catch in the Florida keys range from 7-30lbs.

The Blackfin is our bread and butter when it comes to Tuna in the Florida Keys: great eating, strong fighters, consistent availability.

Yellowfin Tuna is easy to identify due to its very obvious yellowfins.

Yellowfin Tuna is what many know as Ahi Tuna which is quite popular for sushi and poke.

This Tuna can grow up to 200lbs and a rare catch for us in the Florida Keys. The ones we do come across are typically between 60-80lbs.

Atlantic Bluefin Tuna are a warm-blooded fish that are typically found in colder waters. They are only occasionally found in warmer waters while spawning or migrating, making it a pretty rare catch for us in the Florida Keys.

Bluefin Tuna can sometimes be confused with Yellowfin when they are smaller, due to some yellow coloration on their fins. Bluefin Tuna are capable of reaching sizes over 1,000lbs.

Skipjack Tuna is identified easily by the dark horizontal stripes across its silver body. This Tuna is what you will often find in a can at the supermarket.

Bled properly, it makes a fine Tuna salad, fish dip, or even seared. Skipjack Tuna can often be found in the open water traveling at very high speeds with very large congregations of birds flying over them. They can also be found on or near the Marathon Hump sometimes mixed in with Blackfin Tuna.

Often confused with the Bonito which is a toothy looking Tuna that is closer to the Mackerel family, the Bonita has an unusual almost spiral black pattern across their backs and is also a member of the Tuna family. The Bonita is also known by the names Little Tunny, False Albacore, Falsie or my personal favorite, Swirly-back Tuna! They fight hard pound for pound like any other Tuna and can be found in pretty much any depth of water in the Florida Keys.

Their high availability is probably because most anglers consider these Tuna to be of low food quality due to their lower fat content. Easy to find, perceived lower food quality, and bloody flesh makes it very popular for fisherman to use as cut bait. More adventurous eaters simply bleed them like any other Tuna and eat them in cooked preparations.

Some suggest cutting the flesh into cubes, boiling them, and making a tuna salad. Others claim they cannot tell the difference in taste when searing it like any other Tuna!

The Blackfin Tuna can only be found in the Western Atlantic Ocean from Massachusetts down to Brazil. This is unique for a species of Tuna to have a limited range but it probably has something to do with the Blackfin Tuna’s preference to migrate to temperate waters above 70 degrees Fahrenheit. This works wonderfully for Florida fishing enthusiasts because it means the Florida coast is one of the best places to catch a Blackfin Tuna in the Fall, Winter, or Spring.

What Blackfin Means To Charter Fishing

Mahi season ends in the Florida Keys when they are simply no longer around. This often occurs sometime in Autumn. Fortunately for our Captain’s, this is one of the best times to catch Blackfin Tuna on the Hump!  When the winter arrives, Blackfin Tuna often come in much closer to shore as the bait and Gulfstream move closer in. This is wonderful for our clients as it means access to highly desirable offshore fish without having to head 30+ miles offshore to the Hump, while contending with the higher winds and larger waves of the wintertime. The Blackfin Tuna is also a good bet for Captains in the Spring before the Mahi show, and with calmer winds, to be found on the Hump again. The Blackfin Tuna are special because of their consistent availability throughout the year. A school of Blackfin Tuna can save a trip if the Sailfish aren’t biting, or conditions aren’t good for drifting Swordfish baits, etc. 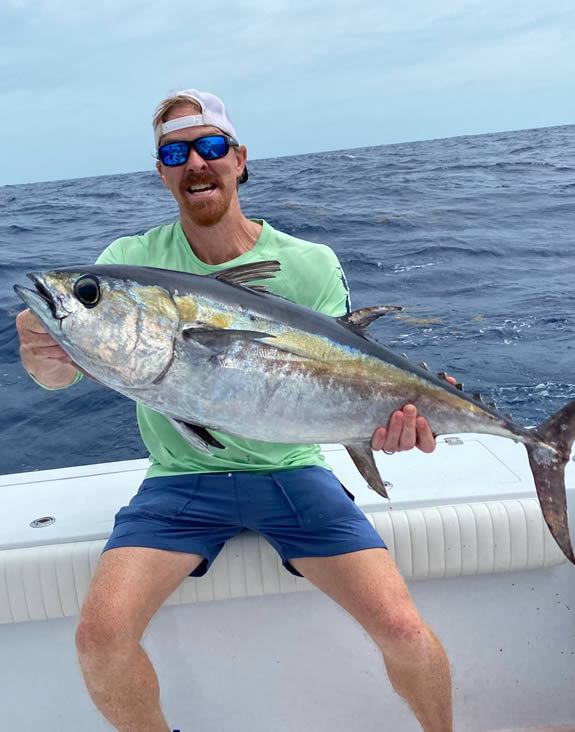 For all of these reasons, both our Captain’s and our clients love Blackfin Tuna! If you are looking to book a Florida Keys fishing charter call us at 305-289-0071 or visit our contact page.

This article mentions the consumption of raw fish. When you eat raw foods you are doing so at your own risk. Main Attraction, its affiliates, owners, and staff are in no way responsible for any allergies, or foodborne illness that might result from eating raw or undercooked fish. Always consult your physician first to ensure you are not a high-risk individual when consuming raw seafood.

This article cites some fishing regulations about Tuna. This article is not a source of Florida Fish and Wildlife regulations. Always consult the official website https://myfwc.com/ for the latest regulations. Main Attraction, its affiliates, owners, and staff are in no way responsible for any inaccuracies or outdated information regarding Fishing Regulations in this article or on this website. 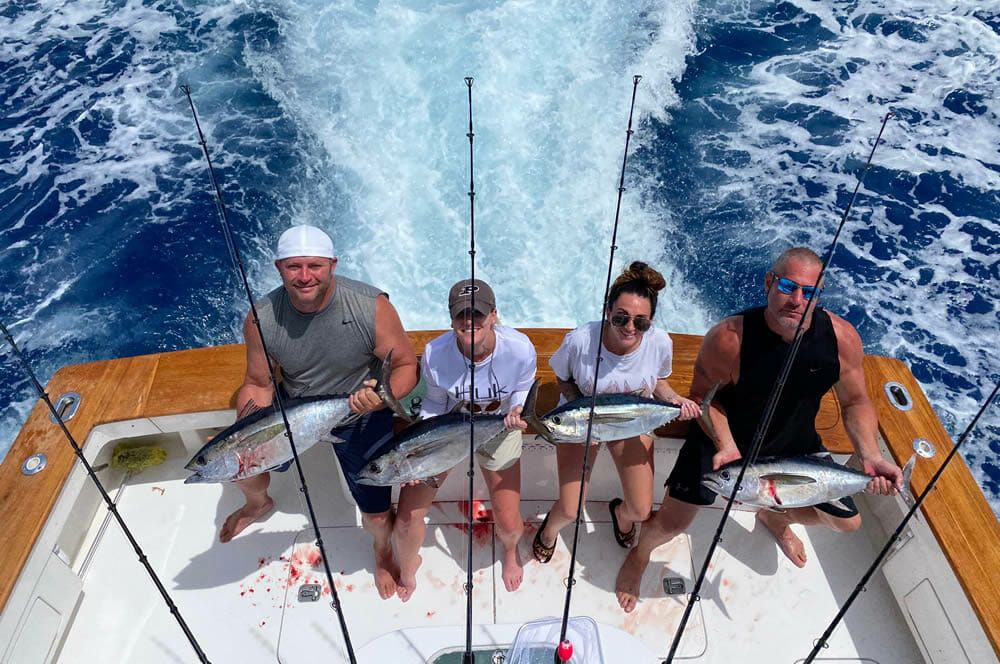